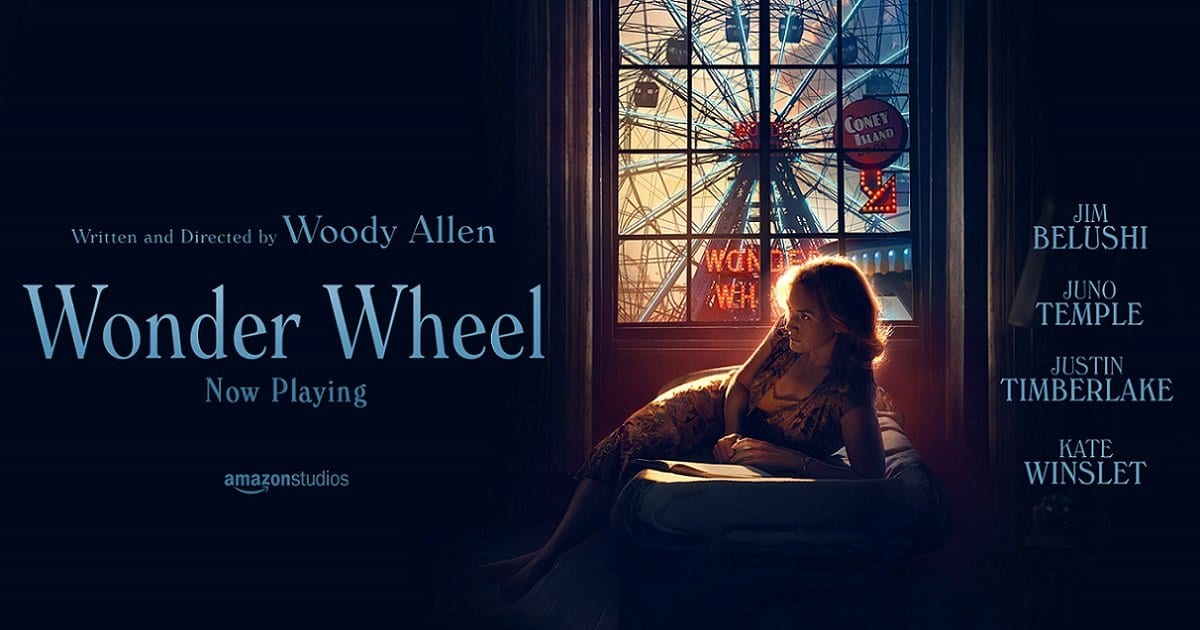 Even in his old age, Woody Allen remains prolific as a director, churning out movies like no other.  Although some would claim that his movies have taken a dip in quality in recent years, he continues to assemble great casts that consistently make his films alluring, no matter the subject matter.  Wonder Wheel continues that trend.  The following review will be spoiler free. 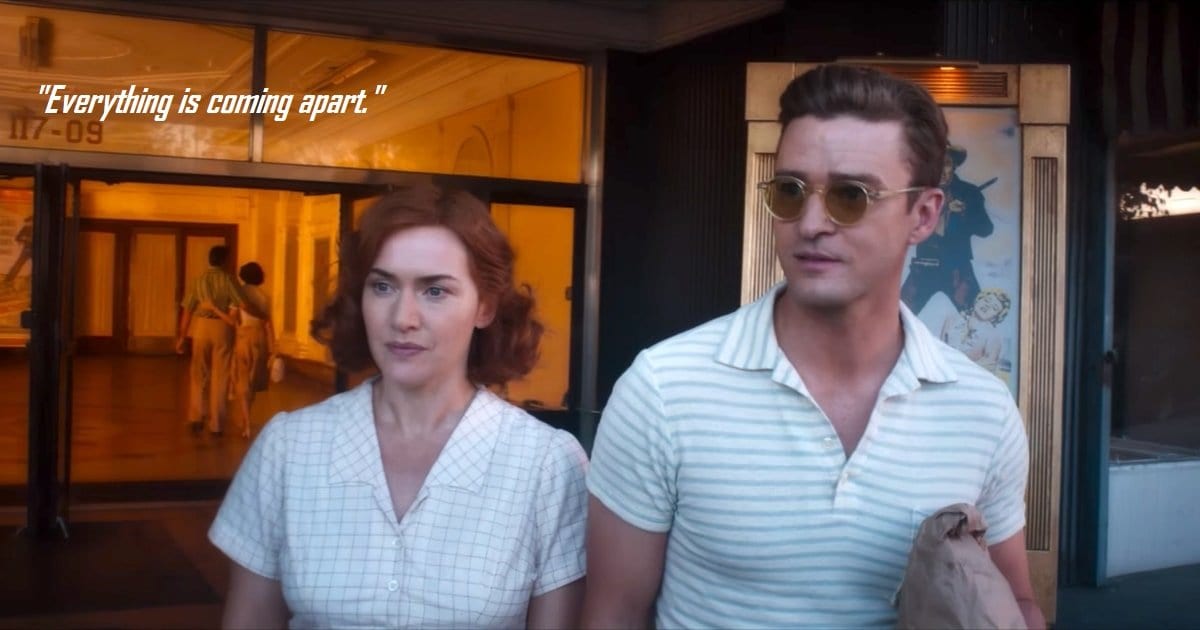 Ginny (Winslet) has come on hard times.  She struggles to make living while handling her husband Humpty (Belushi) that gets violent when he drinks.  As a result, Ginny finds solace in Mickey (Timberlake), a younger lifeguard near the Coney Island pier.  They begin to have an affair together, actions that make Ginny much happier.  However, Humpty’s daughter Carolina comes back into town to avoid the mob as a marked woman, complicating Ginny’s once blissful temptation.

Over the years, Woody Allen’s personal life has certainly made him a polarizing figure to many people.  Some just can’t seem to separate the art from the artist in this case, which has hurt Allen’s esteem in the community, no matter the level of validity of the allegations against him.  However, despite your personal views, one thing that can be agreed upon is that Woody Allen is one of the most prolific directors in all of Hollywood.  Since 1982, Allen has directed at least one movie per year, racking up credits on IMDb like crazy.

But, cranking out movies every year may not be the best idea as Allen’s work has declined in recent years.  He’s shown moments of brilliance with films like Midnight in Paris and Blue Jasmine, but his work as a whole has suffered.  In the current millenium, the average Rotten Tomatoes critics rating for Allen’s films is about 58%, not including Wonder Wheel (which has a 30% for those keeping score at home).  Obviously, Rotten Tomatoes isn’t a perfect rating system, but is does point to a general middling displeasure with Woody Allen’s movies.

If Allen ever needs career advice (his multiple Oscars would say that he won’t), I’d tell him to slow down and work on each of his screenplays for a longer period.  However, he already has another film in post-production, so he probably won’t slow down.  Old habits die hard I guess. As with any other recent Allen movie, Wonder Wheel certainly looks the part.  Aside from some distracting artificial lighting techniques and obvious green screen, there’s a certain pleasant feel to Woody Allen’s rendition of 1950’s Coney Island.  Colors pop all over the screen, making attractive people look even more attractive.  If you’re the type of moviegoer that can shut your brain off and enjoy pretty pictures, Wonder Wheel may be for you.

Woody Allen is an actor’s director.  He’ll stage each scene to allow actors to spout long diatribes regarding their hopes and dreams, and Kate Winslet and Justin Timberlake certainly benefit from this quality.  In some scenes, it’s almost as if Allen yelled “action” then just forgot to turn off the camera.  Winslet has multiple soliloquies that are minutes in length, and all of them allow her to trot around the set in 1950’s garb and flex her acting muscles.  In fact, Winslet is so great in Wonder Wheel that she might distract viewers from the inherent flaws of her character. On the other hand, the dialogue and main storyline lead Wonder Wheel to ultimately feel fairly pretentious and wrong.

Justin Timberlake as Mickey is a poet and a hopeful playwright that is fascinated in the stories of other character and casually reads Hamlet from his lifeguard post.  If you’re internally groaning after reading that last sentence, you responded correctly.  Wonder Wheel poses Mickey as a philosophical being that’s smarter than most other characters, and you can’t help but see the lazy parallel to the creative mind behind the camera.  I mean, Hamlet?  If you’re going to include a character that’s a so-called intelligent poet, at least have him read a book that isn’t something that every high schooler is forced to read in English class.

As the love triangle that formulates between Ginny, Mickey, and Carolina, it becomes abuntantly clear that Ginny is consumed only with finding the right man for her.  All of her actions are to please Mickey and downplay Carolina, pushing the love triangle into a more favorable position for herself.  Ginny commits some pretty horrible acts in order to finally woo her summer fling, causing Wonder Wheel to feel quite vapid as Winslet’s character devolves into a painful caricature of a woman.

This discussion is not to say that a movie can’t have a story with a woman trying to find love as the central concept.  After all, love is a powerful, relatable idea.  But, when a woman’s sanity rests on a relationship with a man like in Wonder Wheel, it just doesn’t seem right.  Woody Allen attempts to juxtapose Ginny’s love troubles with the general downward spiral of her life, but the clear focus is on what men do to her.

Wonder Wheel Has the Right Environment, But it Tells the Wrong Story

Despite its issues, it’s clear that there was good story to tell within the world of Wonder Wheel.  But, it just never materialized.  The juicy side plot of the mob looking for Carolina even included Tony Sirico AKA Paulie Walnuts from The Sopranos.  Who doesn’t want to see that story come to life?

This observation is admittedly a little humorous, but it speaks to a larger issue.  Wonder Wheel is hampered by its PG-13 rating, offering frustratingly tame experiences that would improve with a harder edge to better suck in the audience.  Sadly, Woody Allen settles for bland drama that meanders to its finish.  In this case, Wonder Wheel may be as forgettable as it is frustrating.  Like many other recent Allen films, Wonder Wheel is content with being fluffy without serious bite.

image via The Australian

Wonder Wheel is breezy and mostly harmless which should appease certain audiences.  However, it’s ultimately a misfire that focuses on the wrong issues, making characters feel weak and even off-putting.  There’s an stench of pretentiousness that wafts over the film’s glossy images to an unbearable degree.

At one point during the film, Kate Winslet’s character exclaims, “spare me the bad drama!”  You said it movie, not me.

Thanks for reading!  What are your thoughts on Wonder Wheel?  Comment down below!

If you enjoyed this articel subscribe to MovieBabble via email to stay up to date on the latest content.

“Some just can’t seem to separate the art from the artist in this case”
Well excuse us for refusing to support an egregious sexual assaulter!

That line is certainly not to make light of what he has done!!

Sounds like it’s similar to Café Society – everything shiny, beautiful actors, pretty but not so good movie… But I’ll go see it for sure, I love Woody. I was so happy to read this review, cause I was curious. ?

That’s a pretty accurate comparison! That seems like the norm for all Woody Allen movies these days.