In a move of clear counterprogramming to Deadpool 2, Paramount put their cushy, fluffy romantic comedy Book Club up against the brass, brazen superhero film to appeal to moviegoing audiences that would never ever step inside a theater that’s playing an R-rated comic book film; Paramount even doubled down Book Club‘s cozy nature by adding a plethora of actors that you know and love.  But, as we as a content consuming monolith are slowly beginning to discover, safe isn’t always better.

For years, four friends have come together for a book club as a means to stay close and involved in each other’s lives.  Diane (Keaton) is recently widowed; Sharon (Bergen) is working through a long-winded divorce; Carol (Steenburgen) is in a slumping marriage that lacks fire; Vivian (Fonda) is an independent woman that enjoys the term “no strings attached.”

Feeling like their trapped in a collective rut, one of the women proposes they read Fifty Shades of Grey as their book of the month…and the women begin to long for more in their love life.  Naturally, a few gentlemen come calling shortly after.

Just when I thought I put Fifty Shades out of my mind following Fifty Shades Freed‘s limp ending to the franchise (whatever innuendos you take from that were very much intended), the book series rears its ugly head once in another studio film.

To be fair, the franchise will most likely continue to work as a punchline for several years until the demographic that saw the movies ages out of both the 18-24 and 25-39 age groups, the two most frequent moviegoing demographics.  Even Marlon Wayans tried to lampoon the film in his woefully unfunny Fifty Shades of Black.  When some moderately popular franchise fails, there will always be a few screenwriters waiting to add an easy joke to their project.

Thankfully, we can all let out a sigh of relief with regards to Fifty Shades‘ involvement in this story — it’s merely a plot device that aids in kickstarting the narrative.

From there, the four incredibly talented, accomplished leads head off on their own intertwined stories of love and self-discovery, and it’s admittedly very, very cute.  Book Club spends most of its time juggling the love lives of the four women, cutting between them all and occasionally sitting them all down together again for another round of book discussion.  Surprisingly, this movement never feels rushed or jarring; it’s actually quite seamless.  If you’re not careful, the film’s lovely charm and borderline reckless positivity will swallow you whole.

Finding love will always be a theme with which audiences identify.  However, that feeling goes to a different level when you factor in individuals that some would call “over the hill.”  There’s a hint of desperation involved; time feels like it’s running out.  When this real feeling is added with an overly sentimental core, you’re bound to create a crowd-pleaser, and that’s precisely the angle that Book Club tries to play.  It’s like a warm blanket, filling you with a cozy, tender sensation.

We’ve Grown Up with These Actors

Chances are that you’ve probably seen at least one movie that included these actors before Book Club, even those that have supporting roles.  Normally, this notion wouldn’t do much besides get butts in seats and add a level of prestige to the film.  But, combined with the sentimental story of older individuals looking for love, seeing the familiar faces add an extra level of emotion that would not be there otherwise.

I mean, just look at that cast in the “synopsis” section.  It’s not a stretch to say that Book Club has one of the more stacked casts of 2018 films.  Looking at the faces of actors you’ve loved for years tells a story in which you’ve also taken part.  You saw Jane Fonda burst onto the scene with Barbarella back in 1968.  You were there when Diane Keaton’s Kay handled the mob in The Godfather.  Today, laughter still washes over you every time you watch Wallace Shawn scream “inconceivable!” in The Princess Bride.

Book Club is served with a large side of memberberries, but they add depth to the characters that wouldn’t normally be there. 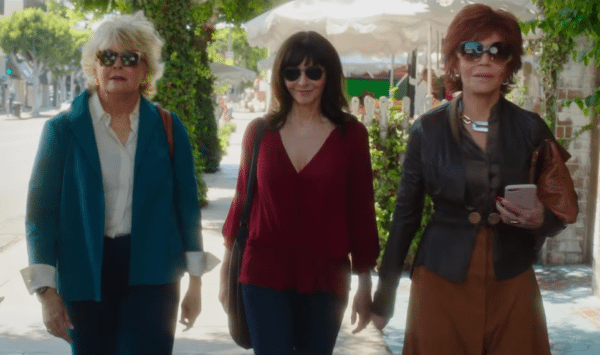 “Broad” and “Cliché” are Serious Understatements

There’s a lot of promise to Book Club.  It has the A-list cast, a heartwarming story, and plenty of opportunities for comedy — except nothing clever is done with the material.

The movie starts as a cute diversion, allowing its actors to quip at each other in a very pleasant manner.  Even the budding relationships are adorable (my favorite of which is Diane Keaton and Andy Garcia’s).  But, by the time the third act comes around, Book Club takes a serious turn into generic territory, and it loses steam rather quickly.

Oddly enough, the overly lit, glossy look of the film matches my feelings about the film as a whole: it’s so excessive that the entire picture loses its color saturation and turns into a gray, hazy paste.  In other words, Book Club works so hard to self-sanitize that it becomes largely forgettable in the end.  I don’t need Book Club to go hard-R to for it to work (although, that would be an interesting endeavor), but falling back on clichés that are so tired that they became taboo years ago is just plain tedious.   It’s afraid to try anything daring, and its cute story falls limp with its inability to say anything new about elderly love.

With as much talent as Book Club possesses, it has plenty of crowd-pleasing, applause-inducing moments that will bring smiles to the faces of the individuals that actively seek out this movie based on their past film enjoyment.  And to them, I say “good for you!”

But for everyone else, Book Club is entirely too derivative and too tame to properly distinguish itself from the crowd.  It’s a film that has a potentially strong core message that is wasted on schmaltz and studio cleanliness.  Essentially, you wish Book Club would have taken a dive into the deep end of the pool, but it’s far too content in dipping its toes in the water.

Thanks for reading! What are your thoughts on Book Club? Comment down below!

This seems like one of those movies to watch to pass the time with and it won’t be a disappointment.

As you said, I love all these actors, but I came away from the movie with the feeling that it could have been better. It was Cinderella for the geriatric crowd. A totally unbelievable fairy tale with some great laughs.

5 Movies That Confused and Intrigued Me