Before we delve into this The Disaster Artist review, I have to get all the urges to spout random pieces of dialogue from The Room out of my system.

“Keep your stupid comments in your pocket!”

“You can drop off the Earth, that’s a promise.”

“WHAT KIND OF MONEY?” 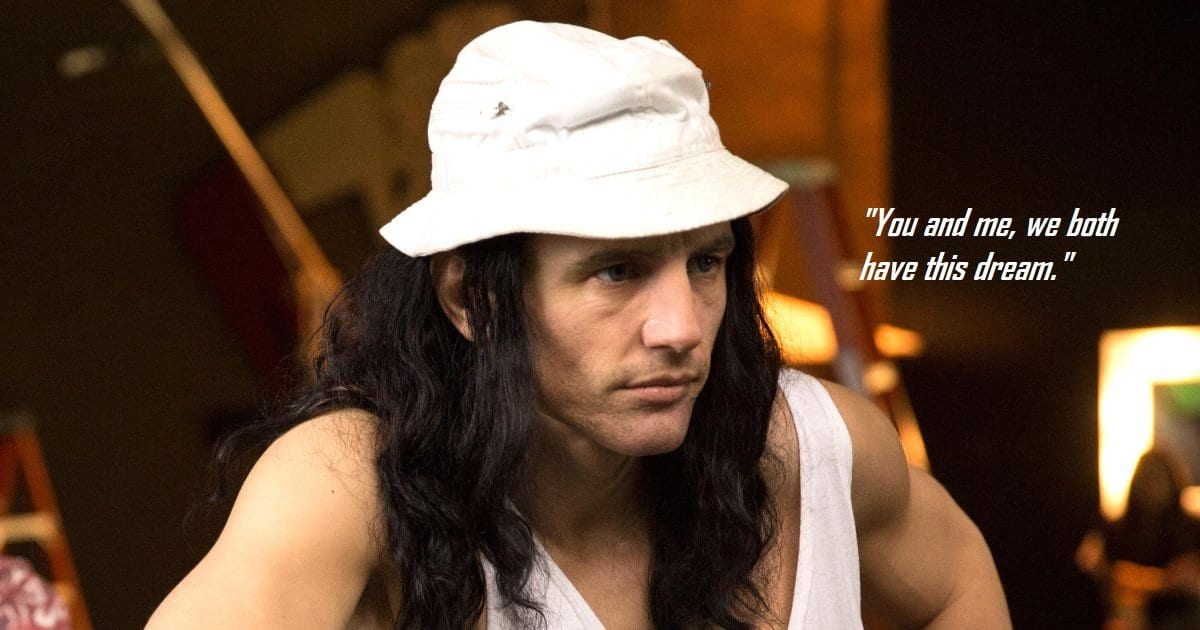 Based off of the novel of the same name, The Disaster Artist follows the real life story of Tommy Wiseau (James Franco), the man behind The Room, which is often considered one of the worst movies ever made.

Upon arriving in Hollywood, Wiseau has this dream to become a star in the film industry.  But, he can’t seem to find his big break as many claim a serious lack of talent.  But that doesn’t stop him.  He quickly begins to develop his own movie (The Room) where he’s the sole creative voice.  Wiseau doesn’t really have a grasp on what it takes to make a great film, however, leading to some crazy circumstances.  Meanwhile, Wiseau’s friend Greg (Dave Franco) tries to better understand Wiseau and his life story which Wiseau himself keeps hidden. 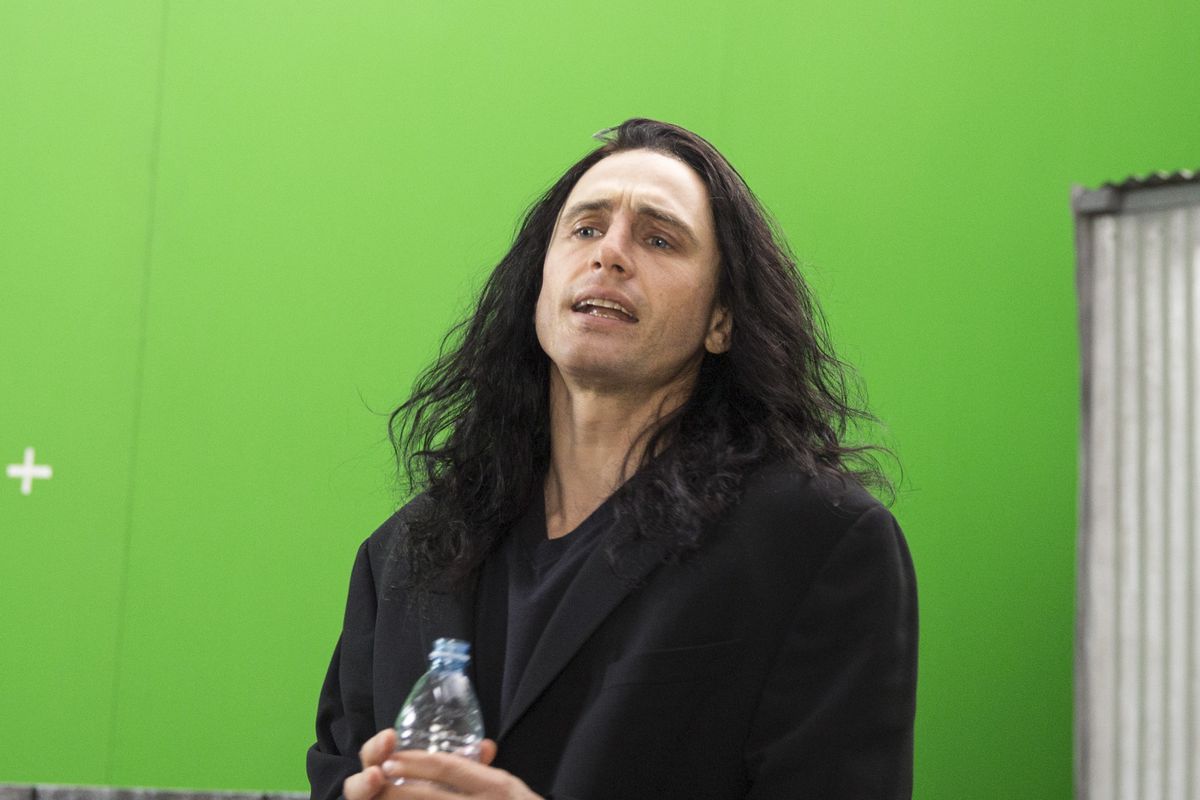 As many of you already know, this film was based off of the book written by Greg Sestero, Tommy Wiseau’s right hand man through the development of The Room.  The book documents how out of his element Wiseau truly was, and how mysterious Wiseau is as a person.  The enigma that is Tommy Wiseau makes The Room that much more fascinating.  No one knows how old he is or his country of origin (he claims to hail from New Orleans).  His movie was almost like a message from outer space to establish contact with an alien species.  Everything about The Room is bizarre, making it ripe for a movie-about-a-movie.

Funny enough, Wiseau had once hoped that Johnny Depp would have played him in the film.  However, since Seth Rogen’s production company, Point Grey Pictures, had purchased the rights to the story, it was clear from the start that James Franco was most likely going to get the role.

Honestly, that’s probably the best choice that could have been made.  Franco is himself an enigma.  Is he a true artist?  Or is he a sell-out that takes the quick paycheck?  The world may never know. James Franco is an easy target for criticism.  He’s the definition of overexposed in Hollywood.  However, Tommy Wiseau is the role he was meant to play.  He has the “hahaha” down to perfection, displaying every single one of Wiseau’s mannerisms with ease.  It’s pretty easy to do considering his appearance, but Franco commands the screen.  He might just be standing in the background when crucial moments are occuring in the center of the frame, but you can’t help but stay locked on him at all times.  In the most awkward of ways, he’s highly alluring.

However, if his performance would have stopped there, it would have been a glorified parody (which would have been easy to do).  From his studies of Wiseau’s life, Franco understood that at his core, Wiseau is just someone that wants recognition and friendship.  Although he’s prancing around the screen and making everyone feel very uncomfortable, there’s always a warped sense of yearning for companionship.  In a weird way, Franco is oddly touching as Wiseau.  It’s a strange contrast of paralleling his wacky personality with very grounded character traits.  It really, really works.

Wiseau is merely a dreamer, something that translates to the lives of many different people across many different races and ideologies.  Franco understood this idea (as misguided as it may have been), forming a lovable loser of sorts.  As the film develops, it’s clear that Wiseau has his issues, but you always have this endearing trait of idealism to remember.  It’s rather sweet in all honesty.

Under less capable hands, The Disaster Artist might have become an all-out comedy show.  Some people might have loved that version.  After all, The Room is an incredibly easy target of jokes.  And yet, Franco and the rest of the team clearly have an off-kilter respect for the cult classic like the rest of us, providing a clear drama that can translate to wider audiences.  Sure, there’s plenty of jokes for your amusement.  However, this film is based off of a true story, meaning real people lived out these events.

There’s a shocking amount of respect paid to the story of Wiseau and Greg Sestero, curating moments that will suck you in from their dramatic nature.  At the end of The Disaster Artist, you will have watched a solid movie.  This is not a quick, slapped together excuse to profit off of its source material.  You’ll care about these characters, hoping for the best for them, wanting them to succeed.  As a matter of fact, The Disaster Artist is a wonderfully crafted drama that just so happens to have a quirky character at its core. 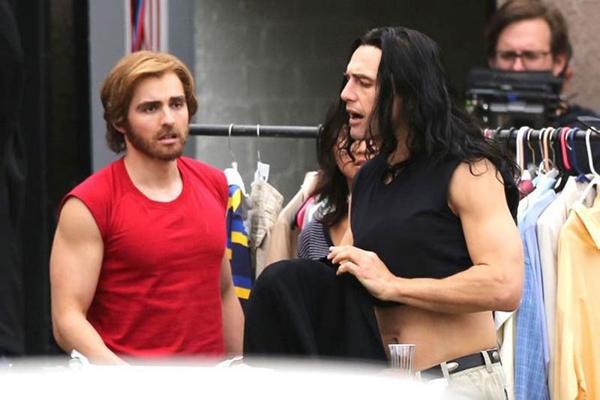 Fans of The Room Will Have Plenty to Smile About

That being said, fans of The Room will have plenty to holler about.  It tackles all angles of Wiseau’s life; where he’s from, where his money comes from, and even the questions around his age.  The Disaster Artist will provide greater detail into each section of what is so fascinating about The Room while continuing to be entertaining as a film.  Some of the movie’s jokes and intricacies may fall on deaf ears to those who aren’t indoctrinated, but those people can still get enough out of this movie to quote “ohh hai, Mark” for days after they see the movie.  Above all else, The Disaster Artist is pure fun.

From the final frames of the movie, it’s clear that James Franco had all of us in mind when making the film.  This a movie by fans, for fans.

The Disaster Artist is an odd celebration of filmmaking.  With the help of a knock-out performance from James Franco, the film helps to capture why The Room is such a beloved entity.  The movie itself is certainly a little inside baseball, but there’s more than enough true drama within the story to create an engaging feature that’ll have you in tears from laughter.  It gets an A.

Like The Room, The Disaster Artist is sure to become a crowd-pleaser.  But, unlike Wiseau’s masterpiece, it’ll please in its intended manner. Thanks for reading!  What are your thoughts on The Disaster Artist?  Comment down below!

If you enjoyed this article, subscribe MovieBabble via email to stay up  to date on the latest content.

Glad you enjoyed it! He’s so solid, I hope he gets an Oscar nomination!

You may have just talked me into seeing this thing :)