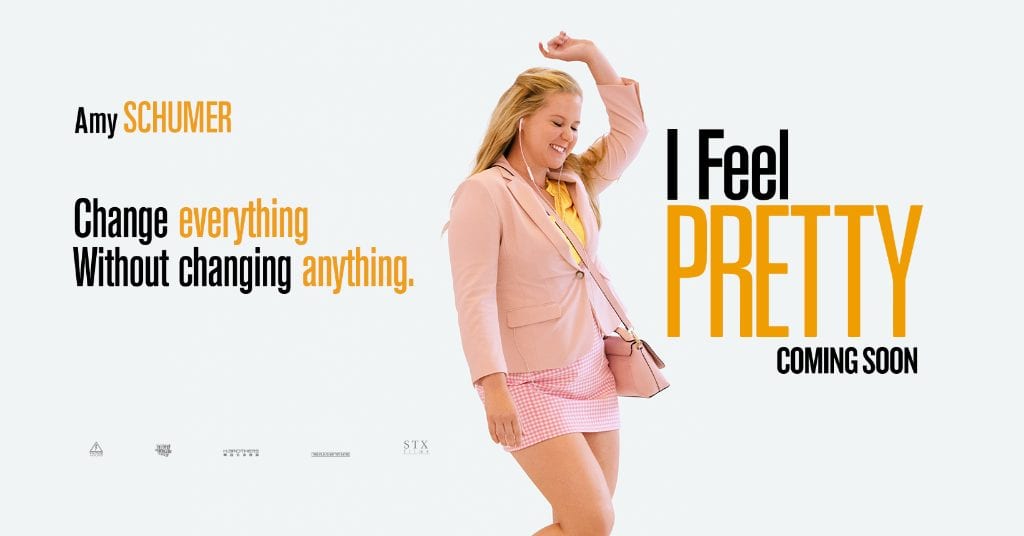 It’s safe to say that Amy Schumer has fallen out of favor with many film fans these days.  Her outspoken behavior has left many cold, but she continues to speak her mind, no matter the subject.  Her latest star turn, I Feel Pretty, seems to work as an extension of her beliefs, and the film itself makes you painfully aware of that every step of the way.

Renee Bennett (Schumer) struggles with serious insecurity and low self-esteem.  She constantly feels pressure to look like unrealistic, women icons, and she’s tired of being overlooked because she’s not classically pretty like a supermodel.

In the middle of a cycling class, Renee’s shoe slips off the pedal, causing her to crash to the floor and smash her head.  Upon regaining consciousness after her fall, Renee no longer recognizes herself in the mirror.  Now she sees a beautiful, confident woman who can do no wrong.  With her new-found confidence, she’s ready to take the world by storm.

The project created by long-time writing partners Abby Kohn and Marc Silverstein is one of the many films that was affected by Infinity War‘s one week shift forward to April 27th.  Following positive test screenings of the film, STX Entertainment initially moved the film forward from June 29th to April 27th to avoid most of the summer blockbuster season.  Obviously, any film is going to have trouble battling against Infinity War, let alone I Feel Pretty which looks to operate on a much smaller scale in terms of box office returns.  That reasoning prompted a second bump forward to April 20th.

However, with the industry moving towards more blockbusters and microbudget films with mid-budget films going by the wayside, can films like I Feel Pretty even survive anymore?  There’s no questioning that they have limited marketing budgets to bring in a large crowd, but they also can’t afford smaller returns at the box office.

Obviously, this question won’t be answered with I Feel Pretty, but it’s certainly worth noting as more middling films have to navigate by countless larger, IP-driven blockbusters in order to get seen.

Michelle Williams is Incredible as the Head of a Cosmetics Company

There’s a long list of actresses that pull out a super high-pitched voice for a certain role to convey a sense of unnecessary entitlement as part of the 1%, but Michelle Williams as the head of a cosmetics company is one of the better instances to come to the big screen in quite some time.  It’s not often that we get to see a renowned actor turn a fairly comedic role into a great, subtle display of acting.  In most cases, a nasally voice is purely for comedic effect.  While it’s incredibly humorous to see Michelle Williams as the embodiment of the snooty upper class in the fashion industry, she brings genuine layers to a character that had no business being more than a caricature.

She utilizes her high-pitched voice as if it’s her regular speaking voice, allowing her to express herself nonverbally with ease.  With an overbearing mother, Williams’ character just wants to succeed and show her and the world that she isn’t phony.  Abby Kohn and Marc Silverstein deserve a lot of credit in that regard as Williams isn’t a one-note villain-type that looks to ruin Amy Schumer’s character and others who aren’t “fit” to become models.  She’s actually pretty sweet, and it’s very compelling to watch Williams consistently undercut the tropes of films that center around the fashion world with such grace and subtle hilarity.

I Feel Pretty‘s Message Lacks Subtlety at Almost Every Turn

The trailer for I Feel Pretty stirred a bit of controversy when it first dropped.  Anything starring Amy Schumer is going to get its fair share of haters, but most people became disgruntled for a different reason.  It appeared that Schumer became confident once she forgot her regular appearance, skirting by the idea of self-actualization for a facade played primarily for humourous purposes.  Luckily, the film doesn’t play out that way, and it actually has a rather touching message at its core that will definitely resonant with some people.

However, that same message clubs you over the head with a sledgehammer, casting aside all nuance.  In some instances, the message becomes so over-the-top that I Feel Pretty plays out like a C-rate animated film from the 1970’s that Disney kept in the Vault because they were too embarrassed to have it leak into the public consciousness.

I Feel Pretty is so caught up in shouting its core message that it forgets to do anything subversive or clever with it.  General positivity and confidence are worthy themes to build a movie around, but there’s never a moment where the actual discussion of the topic ever penetrates the surface.  You already know everything that I Feel Pretty wants to say about body positivity.  The platitudes become very tired rather quickly.

Amy Schumer Clearly Had Some Things On Her Mind

Individuals in Hollywood latch onto projects that create some tie to what they hold close in their personal lives.  Well…they do that some of the time at least.

Regardless, Schumer clearly believes in body positivity in her own life which is definitely a worthy cause (even if she seems to bother some in the process).  Getting involved in a film like I Feel Pretty isn’t a problem.  In fact, having an actor feel strongly about the material is a serious benefit.  But, it feels like Schumer became lost in creating an extension of her personal pursuits.  In some instances, her acting is very wooden and awkward, and not by design, either.  Then, once she gets to shout something about body positivity, she expresses herself in a way that never approaches believability.  In essence, she’s too eager to continue her crusade for positive body image for her character to work within the confines of the film.

Her performance is akin to a director making it absurdly obvious that a movie is some sort of personal plight.  It’s like Darren Aronofsky with mother!, but with much less baby dismemberment (thankfully).  Schumer forgets to act and resorts to lecturing, and it makes for a terribly cliché movie. 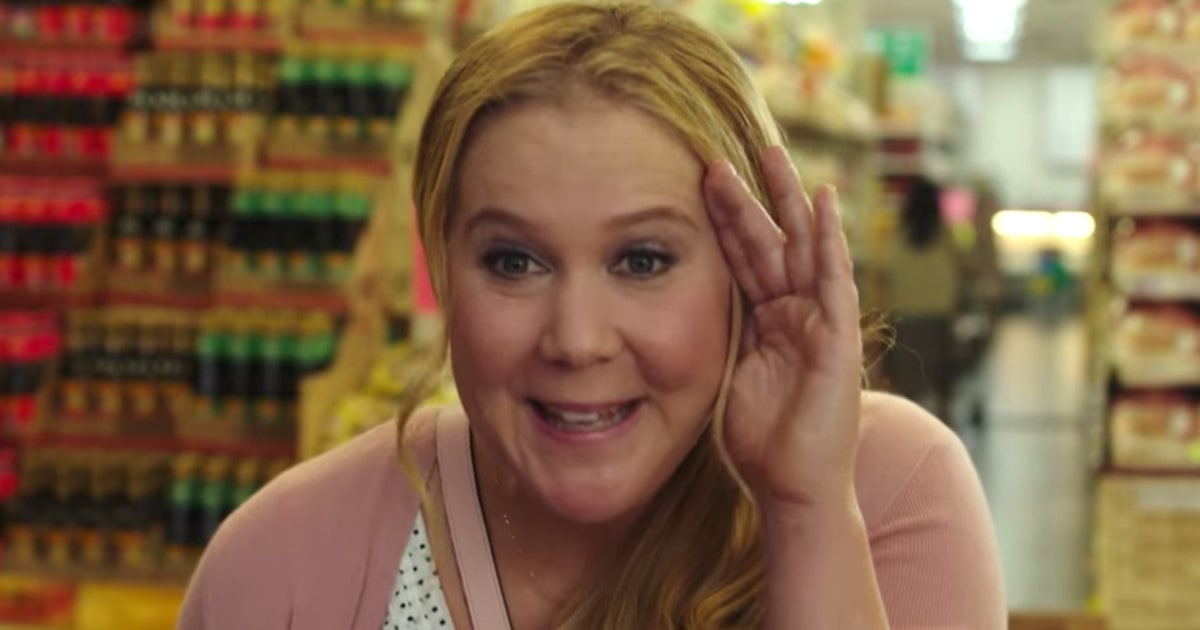 Many will find things to enjoy in I Feel Pretty.  Its feel-good message is going to hit home for a lot of individuals, and I certainly hope that this film does some good for people.

However, I Feel Pretty from a critical perspective does not succeed as it shouts its message from a metaphorical mountain top and doesn’t stop even after you shout back “okay, I get it!”  Amy Schumer is grasping at straws in a role that never goes deeper than the surface.  I Feel Pretty just doesn’t have the cultural resonance it aspires to have, and it flounders as a result. Thanks for reading! What are your thoughts on I Feel Pretty? Comment down below!

I was also hoping for something a bit deeper. Judd Apatow i think would have nailed this premise. It was refreshing to see that males can also have a bit of insecurities as well. Also the “hot” guy in the movie wasn’t the love interest either which separates its self a little from the norm.

I agree! There’s a good movie in there somewhere, but it missed a little extra oomph

I have been waiting for you to review this film. It’a sad that they didn’t dig deeper on the topic, however I do love Michelle Williams so I may still check it out! Thank you for being through as always.

I’m looking forward to watching up. I think confidence is half the battle to looking good. If she can inspire others to see their own beauty then this is an awesome feel good film.

I hope she does!

Good review. I think the wholesome value of the subject of what is deemed “beautiful” in society is a good idea for a feature film. Unfortunately, to me, I think I Feel Pretty didn’t dig deep enough of the subject. Plus, the structure of the film itself was riddled with problem. All in all, it’s not bad, but could’ve been a whole lot better.

I think we agree exactly!

“I have a bad feeling about this.”

I love Amy Schumer; I think she’s terrific. The only problem I have with the movie’s premise (and I’ve not seen it yet) is that Schumer isn’t at all unattractive (to me, at least). The central premise would be a lot more empowering (though no longer a lightweight comedy) if it really committed to the idea of someone who was, say, severely disfigured in some way. If this premise had been reworked into a drama with a slight fantasy element, it might be more powerful. Nevertheless, I intend to catch it at some point.

I really like the idea because it’s something that many women, myself included, face. But of course the execution is probably terrible.

Yes absolutely! More movies should have such a positive message, I just wanted it to work a little better!