14 Songs That Make Teen Titans GO! (To the Movies)

To celebrate the release of Teen Titans GO! To the Movies, MovieBabble has created a Spotify playlist inspired by the film. Some of the choices are a bit on-the-nose (like from the actual soundtrack for instance), and some may seem random (a late 1980s love song?). We’ll explore each track and explain why each was chosen to represent the movie and its characters.

Greg Cipes (Beast Boy), Scott Menville (Robin), Khary Payton (Cyborg — also King Ezekial on The Walking Dead), Tara Strong (Raven) and Hynden Walch (Starfire) collaborated and contributed this song to the film’s official soundtrack. Originally the plan was to add the theme from the television series, but in the end the brief length of this track won out.  It’s funny, energetic, and, obviously, represents the movie well.

Ever since its inclusion on the Footloose soundtrack in 1984, it has been featured in movies, television shows, commercials, YouTube videos, you name it. So, perhaps it has been overused a bit. However, the stirring nature of the instrumentation (and the title) seemed very fitting here. This music video was unmistakably made in the 1980s. Enjoy!

I’ll level with you, I put the word robot into the Spotify search. This was one of the options that came up and the title seemed very fitting. Starfire is an alien, and Cyborg is, well, a cyborg. Once I heard the lyrics and felt the overall tone of the song, I was pleased to find it fit very well into the theme. Despite the title, the lyrics actually work as a Robin and Starfire song (more-so than a Cyborg and Starfire song).

“…A beautiful mystery,
You keep me guessing,
You’re just like gravity,
You keep me on my feet
Just like my next heart beat,
You’ll be waiting for me…”

Fort Minor is a rap group led by Mike Shinoda of Linkin Park fame. Their song, “Remember the Name” features a movie-ready instrumentation and delivery. However, something about the lyrics and overall mood of “High Road” seemed a much better match for teenage superheroes who are largely underestimated. I would say it works well from Robin’s perspective, with lyrics about not breaking up a team they worked to build. Plus, teaming a rapper (Mike) with a more mellow singer (John Legend) is very much a soundtrack tactic. 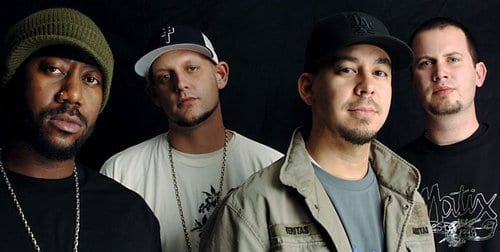 “Hero” was chosen for two reasons: the title, and the fact that Skillet features a male (John Cooper) and female (Jen Ledger) vocalist. Their back and forth  in the song seemed very fitting to represent the two girl-three guy Titans team. As an added bonus, Ledger’s voice is somewhat similar to Starfire’s in this song. The lyrics are more from the perspective of someone the Teen Titans might swoop in and save, versus the team themselves.

Halsey voices Wonder Woman in Teen Titans Go! To the Movies. The inclusion of one of her songs was a given. This song was actually the first decision I made when this idea arose. The lyrics of “Alone” seemed to be the best choice for this playlist. The mood of the song is feeling alone, even when on the surface, it seems everyone loves you. It seems very fitting for a superhero, or a team of them.

This song was chosen to represent Raven. Evanescence has an overall “gothic” feel to their music, which I think fits her character well. It also seems like something Raven would put on a playlist, so I added it to this one for her. It’s really as simple as that!

The original idea was to use Bowie’s “Heroes” (of course), however, this one fit so well. It even sounds like it would come from the movie’s soundtrack. The track is very similar to a lot of music used in modern animation. As an added bonus, some of the lyrics are about clichés found in action films.

Many movies feature a moment when two characters’ eyes meet, and a love song plays. For example, Gary Wright’s “Dreamweaver” in Wayne’s World, and Toy Story 3. I pictured a scene like that between Robin and Starfire (or Beast Boy and Raven), with Robin having a montage-style daydream about Starfire. It seemed like a perfect song for a moment like that. In the interest of full disclosure: it’s also one of my favorite songs, and gets added to many playlists in day-to-day life.

This one is for Beast Boy. Lyrically it doesn’t fit him, but the overall bouncy feel of the music does. As does the title, of course, since he can turn into any animal. I admit this is kind of a cheesy cheat of a choice. Popular songs like this often end up being in movies, commercials, or the actual soundtracks for the film just because of the beat.

The animated music video this song had is the main thing that brought it to mind for this playlist. It had a chaotic feel to it, almost like an animated action film. The main guitar riff and overall rhythm also match rather closely with music used on the Teen Titans Go! television series. This was a natural fit even if the lyrics have nothing to do with the team.

This struck me as a song the Teen Titans might actually sing (with some lyrical adjustments). The Teen Titans always struck me as superheroes that weren’t treated as such. They don’t garner the same respect as their adult counterparts. They’re seen as sidekicks only. This song is great for addressing doubters in your life.

The idea of only being truly happy when you are feeling miserable seemed like a very Raven sentiment.

Even the tone Shirley Manson (lead singer of Garbage) delivers the song in is a little Raven-esque.

I envisioned this as something that would play as the credits roll. Generic Superman references, and a feel-good pop beat serve the purpose. Like they said in the credits of The Lego Batman Movie, it’s the kind of song, “that makes parents and studio executives happy.”

Thank you for reading! What are you thoughts on songs for Teen Titans Go! To the Movies? What would you choose? Comment down below!

Loved Upbeat. In fact, I need to put that on my Spotify pronto.

I loved the songs they sing in the film: Go!, Upbeat, and My Superhero Movie!

I heard Upbeat on Spotify the other day. So. Funny!

Just to clarify, Mike Shinoda didn’t leave Linkin Park, Fort Minor was just a side project he did years ago.

Also, the version of the Teen Titans GO! theme Spotify has is like, six minutes long, that’s why I used the rap from the movie. ;) I forgot to specify that.

I think that’s it.
Return to your regularly scheduled lives.