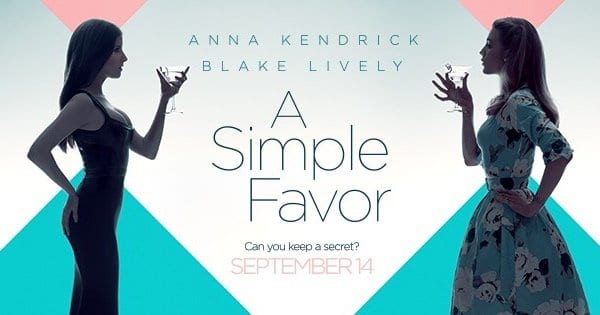 A Simple Favor definitely sells itself as a Gone Girl-esque movie, with Blake Lively as the beautiful and enigmatic Emily Nelson and Anna Kendrick as the seemingly gullible and naive best friend. While it is not parallel with the sheer creepiness that is Gone Girl, mainly because it can’t decide if it is a thriller or a comedy, it does succeed in delivering a compelling movie, with good acting and a decent mystery.

A Simple Favor centers around Stephanie (Anna Kendrick), a mommy blogger who seeks to uncover the truth behind her best friend Emily’s (Blake Lively) sudden disappearance from their small town.

Paul Feig interestingly has done a lot of female-centered movies in recent years, with the stand-outs being Bridesmaids and Spy, both featuring the amazingly comedic Melissa McCarthy. This is mainly because he was frustrated watching modern comedies due to the lack of diverse representation women were starting to get in them. Most of the time, they are relegated to just being eye candy, or functioning at extreme ends of the spectrum as mean or perfect. He even tried to get rights to Wonder Woman, and though he didn’t manage to, I am happy to see a director in Hollywood who recognizes that female characters can be funny and compelling to watch, that we no longer need a man in a lead role to sell a movie.

Blake Lively has been saying in a few interviews that Anna feels like a female version of Ryan Reynolds, and given the fact that Reynolds is Lively’s husband, it is easy to see why the two get along so well. There is an obvious friendship in all these interviews, which I think made it easier for the two to reflect this in the movie.

A lot of the movie is built around their conversations with each other, conversations filled with humor and banter, vulnerability and confession. Lively plays the queen bee character to perfection, probably channeling all her Gossip Girl essence, and Kendrick is her usual, quirky self. The best parts of the movie are definitely when the two are on screen together, so fingers crossed that the future will bring us another movie starring the both of them.

The two bond because their sons are best friends in school, and the friendship develops when an impromptu play date is requested by the kids. Feig contrasts Kendrick and Lively’s parenting styles. Kendrick is the enthusiastic try-hard mom, who volunteers for everything and strives for perfection in every aspect of her parenting. Lively is the working mom who wants more time with her son, but can’t afford to take time away from work because her efforts are the major contributor to the household.

Kendrick brings up the divide between stay-home moms and working moms a few times, and the judgement both face because of their choices. I thought that this is an excellent commentary on how mothers are viewed in society, and Feig slips this to us without coming across as too didactic.

Kendrick is judged by the other parents because she is too on the ball, and Lively gets flake for always working and not being there enough for her son. In the parental fray, there is also the addition of a house husband, played by Andrew Rannells. I really enjoyed his role as one of the three in the spectator-gossips, who are always seen providing commentary on Kendrick and Lively.

Later on the movie, we are forced to consider how much of a role motherhood plays in a child’s life. It is mentioned that some children are just born rotten, that no amount of good parenting can ever set them straight. Yet there is the undeniable presence of the nurture aspect, where Kendrick and Lively’s children seem to reflect the personalities of their mothers. Nicky is more assertive and direct like his mom, with his dropping of f-bombs mimicking Lively’s careless use of vulgarity around her child, while Kendrick’s child is more peace-loving and dorky like his mom. 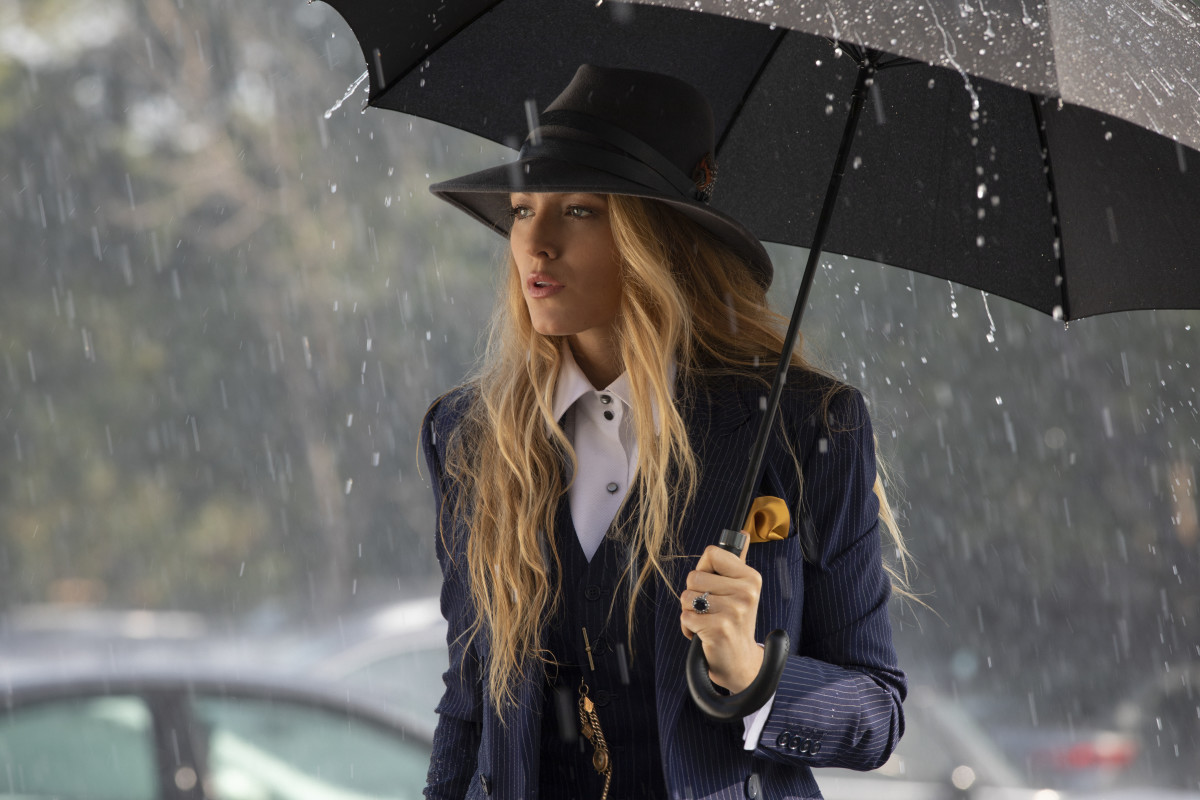 Blake Lively’s clothing and style in this movie slayed me, and made me want to go out and buy myself a pant suit, even though I don’t have the height and physique to pull it off. It made sense for her characterization, since she is a fashion publicist, and though the style may seem so extra at times, it doesn’t matter, because she pulls it off. This menswear inspired looks seems to be a trend in recent female centered movies, with Cate Blanchett recently serving such looks in Ocean’s 8, and is reminiscent of Katharine Hepburn’s proclivity for pant suits back in the day.  I am loving it and want to see more of it. Kendrick’s style had more of a cutesy vibe going for it, more tightly budgeted, especially with mentions of Target and Gap. I was initially surprised that Kendrick was cast as a mom, since she looks so young and I did wonder about how believable she would be. I think this was done in part because moms can be anyone, they don’t have to be a certain way or a certain age, or even a certain gender, if we take into account Rannells’ character.

I think what affects this movie is that it wants to be a thriller, and sets itself up as such, but then adds in weird over-the-top moments that feel so off when trying to create a suspenseful atmosphere. An example is Linda Cardellini’s character, who disappointingly only appears briefly, coming across as a bit too eccentric. Kendrick’s character also has a run-in with someone holding a rifle, and we think he is going to confront her, but it just turns into a comedic moment. The ending moments of confrontation are also ruined by this jokey vibe. I laughed at those moments, because they are funny, but it does seem that movie forgets it is a thriller during the ending bits.

A Simple Favor does well due to the acting charms of Kendrick and Lively. The mystery of Lively’s disappearance and Kendrick’s investigation into said disappearance does drive the film. My brother and I would turn to each other at certain moments of the movie with guesses as to what could have happened to her, but we didn’t even come close. There are certain revelations that are so well-done, that I found myself wide-eyed in disbelief.

Henry Golding is more convincing in this movie than in Crazy Rich Asians, I guess in part because he plays a fairly superficial character here, so I don’t need to be convinced of his depth because he doesn’t have any. I enjoyed the movie more than I thought I would, and I found it to be an entertaining way to spend a few hours. Now, please excuse me while I spend the next few hours googling the looks from this movie, and finding ways to replicate them with my school teacher salary.

Thank you for reading! What did you think about A Simple Favor? Comment down below!

Definitely was a welcome surprise at the movies this year. Plus, Kendrick and Lively were excellent in it….

Agreed! I had to practically force my brother to see it with me, since he felt it wouldn’t be worth the money, but he ended up liking it as well.

Great review. I saw the movie last night as was really surprised by how much I enjoyed it. Please check out my spoiler-free review (https://www.youtube.com/watch?v=7SlYsXjL-oc) and let me know what you think.

Hey Kieran! Thanks for the comment :) I had a listen, and you have a really nice voice. Your review articulated a lot of similar thoughts that I had, so yay, great minds! Completely agree about Blake Lively stealing every scene she’s in.

I read the book which I found to be okay, at best, so I don’t really wanna see the film. I feel also the film gets a bit too gratuitous. For example, I heard there’s a makeout scene between Anna Kendrick and Blake Lively whereas in the book, such a scene or attraction between the characters doesn’t exist.

I agree that make-out scenes shouldn’t be there for the sake of being there, but having watched the movie, I didn’t find it gratuitous at all. I could understand it in the context, and it wasn’t because they were attracted to each other or anything.

Thanks for your review Natasha. I really enjoyed this movie. I thought the combining of comedy with the thriller elements made it really enjoyable. Great to see women taking the lead roles in these movies!

I think the combination was good at certain parts, but at the end it was a bit messy to be honest. I enjoyed it immensely though! Wasn’t expecting to so I think that added to it.