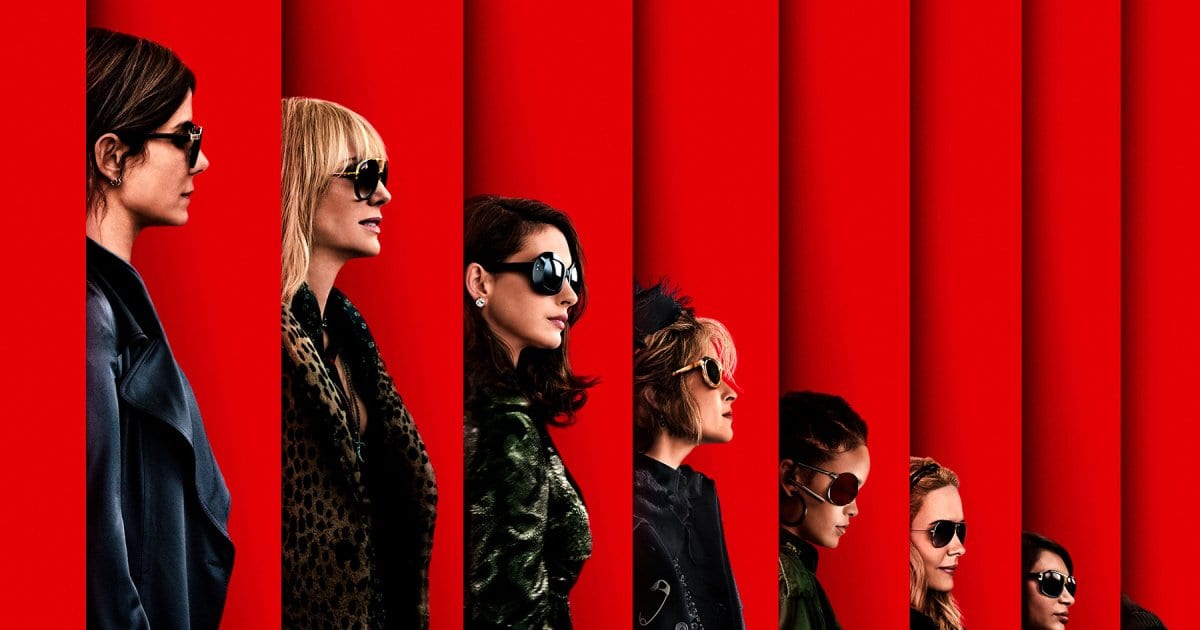 After the PR nightmare that was the 2016 reboot of Ghostbusters, Warner Bros. may have been shaking in their boots as they rolled out their marketing campaign for an all-female addition to the Ocean’s franchise, Ocean’s 8.

Yet, with a talented cast headlined by Sandra Bullock, Ocean’s 8 has stayed away from an all-out onslaught of hate speech as many became excited to see another round of talented actors looking and acting smooth.  Luckily, Ocean’s 8′s group of lovely actresses are game for some high stakes shenanigans.

Following her release from an extended stay in prison, Debbie (Bullock), the estranged sister of con man Danny Ocean, is ready for another round conning after having many years to think through a perfect plan, and she quickly moves to get a gang together that can properly execute the heist.  Their target?  None other than New York City’s annual Met Gala where one star will be wearing a necklace worth more than $150 million.

You’d probably be naive if you thought that Warner Bros. was wholly confident in Ocean’s 8 following the female Ghostbusters fiasco that left a wound in the realm of internet movie discussion that will most likely never completely heal.  The damage was less about the movie in this case.  Rather, the debate turned into more of a discussion of gender roles.  Even those that didn’t have a say in the matter grew weary.  By the time the film came to theaters, everyone was exhausted — in a multitude of ways.

However, it appears that WB was watching Sony carefully, taking lengthy notes of how not to handle a barrage of hate speech that is the equivalent of Michael B. Jordan’s haymakers in Creed.  They didn’t roll out a trailer until they felt confident, creating a marketing campaign that never wavered.  The focus was always on a bunch of kickass ladies looking glamorous as they take on a luxurious heist.  What’s not to love?

There’s always going to be a few sick individuals that ruin the fun — and there’s a legitimate conversation to have with whether or not we should give female casts their own franchises or reboot older ones that once included predominantly male-led casts — but WB seems to have their ducks in a row.  In a time where even NBA executives resort to using burner accounts on Twitter to fight their perceived enemies (or it’s that same executive’s wife — allegedly), I must offer my praise to WB in the form of a slow clap.  Take it away, Not Another Teen Movie:

This Cast is Pretty Awesome

The budget for Ocean’s 8 is reportedly around $70 million.  Realistically, about 95% of that number went towards two things: the cast and their never-ending wardrobe (seriously, they change outfits every scene).  I must admit, it’s pretty glamorous.

The entire cast is clearly having a blast as they change from one outfit to another which evoke lines of dialogue such as “who are you wearing?” and the like.  On a basic level, it’s wonderful to see a bunch of incredibly beautiful women waltz around as they exchange equally sly lines with a smirk and a wink.  They capture the spirit of the original Ocean’s franchise that included its own band of slick (and equally attractive) con people.  Basically, these ladies are cool.

Calling Ocean’s 8 a “character study” would be a little far-fetched, but director Gary Ross substitutes depth with more glitz and glamor and jewels and makeup and fashion and money and even more jewels.  It’s totally acceptable to view the film as incredibly superficial, but I actually admire a film that is willing to drop everything else in the pursuit of appearing beautiful and glossy.  The entire cast loves it too.

Did I Mention that I Love this Cast?

Ocean’s 8 is full of beauty, but underneath it all is some serious intelligence.  Sandra Bullock’s Debbie had over five years to think of a master plan while sitting in prison.  She has the plan down pat, accounting for every little detail along the way.  Her confidence is brimming.  She knows she’s the smartest person in the room.

Everyone has their own brand of confidence that keeps them distinct from one another.  Or, in the case of Helena Bonham Carter and Mindy Kaling, they’re clearly not confident and those that have a little extra to give away help them even out their quirks for the sake of the heist.

Bullock and Blanchett continue to show why they’re national treasures, but it’s none other than Anne Hathaway that steals the show. She’s the one that is most enjoying the excessively glitzy life as a hilariously ditzy star that cares about two things: fashion and well, fashion.  Hathaway acts absurdly shallow any chance she gets to the point where it borders on slapstick.  You need a performance like this one to come around every once in a while so that you can remember that movies are just pure fun.

Ocean’s 8 Lacks the Drive and Stakes of Great Capers

However, I would be remiss if I didn’t mention that Ocean’s 8 is a sleek, well-oiled knock-off of the other Ocean’s films as well as other popular heist films.  This film is lucky to have these great women to elevate its rather average script.  They’re good enough to distract you from a lot of the film’s deficiencies. Namely, the heist itself which — when you think about it nice and hard — has a bunch of logical inconsistencies.

In any good heist film, it’s less about the characters performing the heist versus some villain and more about those same people against the odds.  Ocean’s 8 misses that feeling that these ladies could fail at any moment, ridding the film of any tension.  Any heist film is going to have its conveniences, but this film in particular feels a tad too convenient too often.  It’s shockingly bland if I’m being perfectly honest.

If you’re looking for a demanding film that pushes the boundaries of cinema, Ocean’s 8 is going to disappoint big time.  It lacks the stellar script that is needed out of great heist film, and its finer details are quite muddled and struggle to keep the movie moving in a positive direction.

But, what it does have is a bunch of beautiful women outsmarting everyone around them as they are dressed to the nines while displaying wonderful sleight of hand.  That sounds pretty wonderful if you ask me.

Thanks for reading!  What are your thoughts on Ocean’s 8?  Comment down below!

My daughter wants to see this…awesome cast…we’ve just done JWFK though…so many good films this year, I have to watch the pennies!!

I hope you get to watch it soon!

I saw JWFK that’s the main thing, we hope to but still have at least… 2 Disney films, Mamma Mia 2, The Meg, Fantastic Beasts 2 and Bohemian Rhapsody to fit in yet!!

Us neither! Love Jason Statham. ..and a good monster film, looks fun!

I had not really expected that this film would turn out so well, but overall the buzz and most of the reviews I have read for it, are highly positive. Big surprise, but a welcome one. Probably won’t be heading to the cinema for this one, but will definitely watch it as soon as it arrives on dvd :) Great post as always :)

Hey!!! Glad to hear from ya again! That’s probably wise — it’s not something that will blow you away at all

Thank you, I just came back to the bloggiverse today, and it’s great to be back. Looking forward to reading your posts again 😊

It’s great to have you back!!!