Child Stars Who Never Made It as Adult Stars 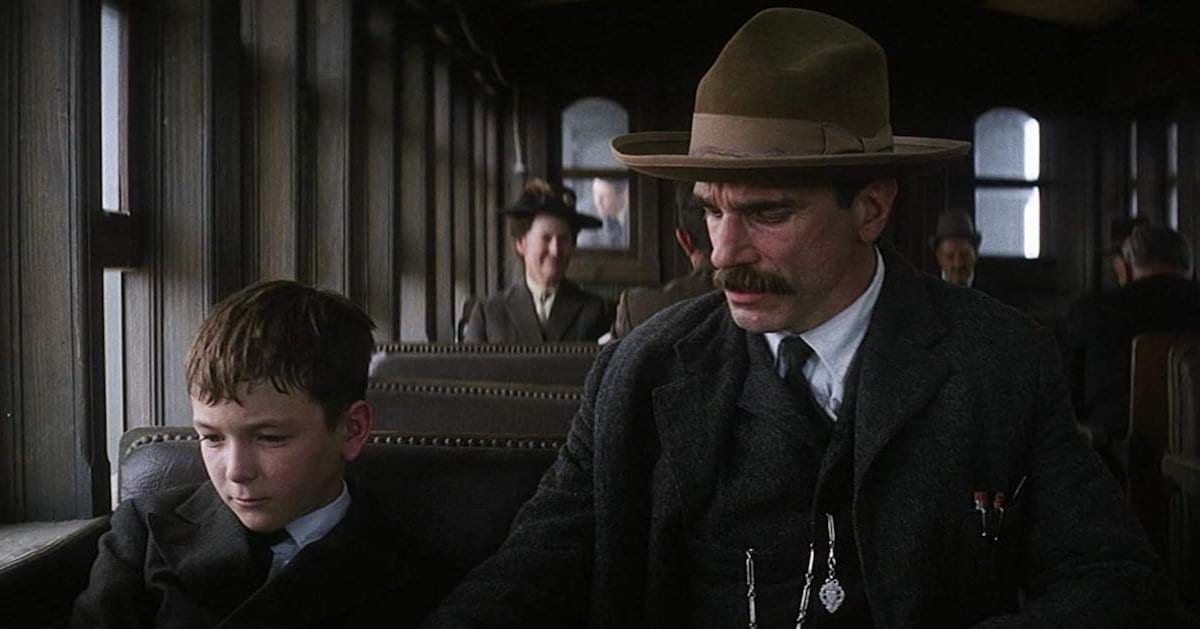 The release this week of The House with a Clock in its Walls starring Jack Black and Cate Blanchett gives another opportunity to showcase another child star, Owen Vaccaro, already a veteran after appearing in the two Daddy’s Home movies as well as the awful Mother’s Day.

You have to go all the way back to 1921 and the release of Charlie Chaplin’s The Kid to see the first child star. This was Jackie Coogan, who in later years played Uncle Fester on TV’s The Addams Family in the 1960s. The first female child star was of course Shirley Temple who had starred in an astonishing twenty movies by the age of ten. In adult life she carved out a career in politics, serving as the U.S ambassador in Ghana and Czechoslovakia.

In more recent times we have seen the careers of child actors continue into successful adult careers. The likes of Jodie Foster (Taxi Driver), Christian Bale (Empire of the Sun), Lukas Haas (Witness), Dakota Fanning (The Cat in the Hat) and Natalie Portman (Leon) just to name a few.

However there are many child stars that do not obtain adult stardom for one reason or another. Here is a list of ten such actors who appeared in some great movies in their youth.

Kes is one of the so-called “British kitchen sink dramas” from the 1960s. These were movies about working class people and their struggles. The film was directed by Ken Loach and is regarded as one of the best of this genre. The story is about a fifteen year old boy who is bullied both at home and at school finding solace in the rearing of a pet falcon that he names Kes. Like all kitchen sink dramas it does not end particularly well. After the movie, Bradley, who is outstanding throughout as the boy, concentrated on theater work. He occasionally pops up on British TV and was seen back on the big screen this year in Macbeth. 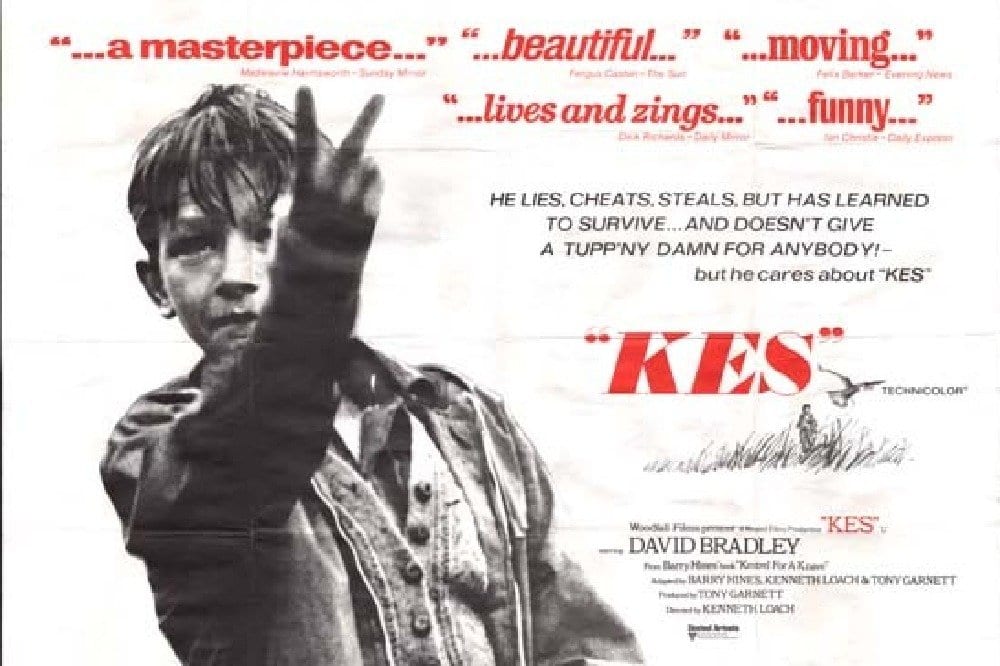 Peter Ostrum was twelve years old when he was chosen to play Charlie Bucket in the movie version of Roald Dahl’s book Charlie and the Chocolate Factory. The movie title was changed due to a promotional deal struck with Quaker Oats who produced a Wonka Bar that was released at the same time as the movie. Ostrum, who was from the Midwest, spent five months in Munich filming. On its completion he was offered a three movie deal by the studio, which he rejected. After the experience of making the movie he had decided that it was not the life for him. He went on to study veterinary medicine and received his Doctorate in 1984. The movie itself would go on to become an all time classic that is sure to be found on some channel almost every day. 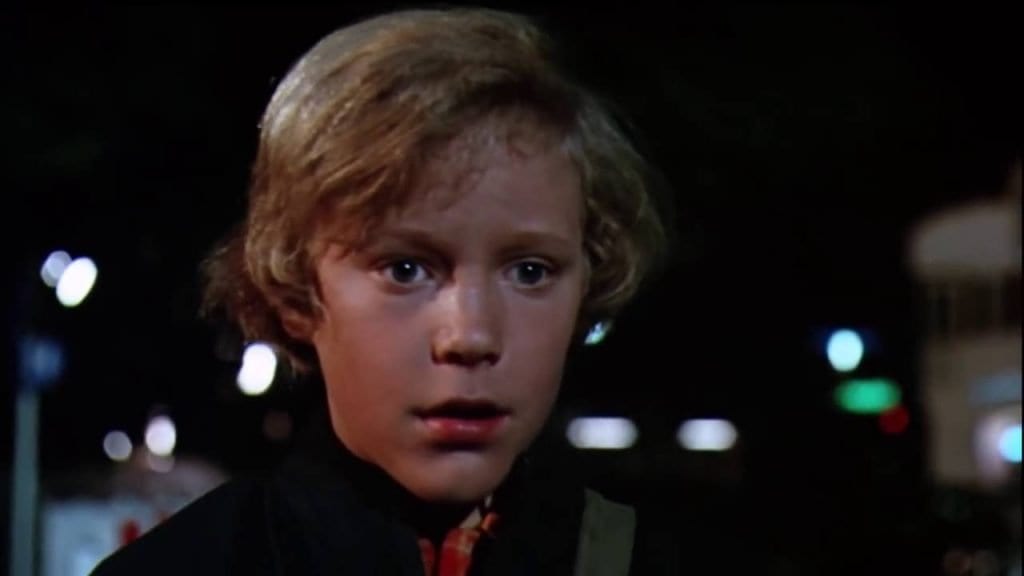 A Saturday night babysitting triple bill: Rosemary’s Baby, The Exorcist and The Omen, anyone? Not me! Harvey Stephens was only six years old when he played Damian, the antichrist, in the movie. He got the role after the director, Richard Donner, asked him to attack him during the audition. Stephens obliged by hitting him in the nuts! It was to be his only major role. In the 2006 remake he made a brief appearance as a tabloid journalist. He now works as a property developer. 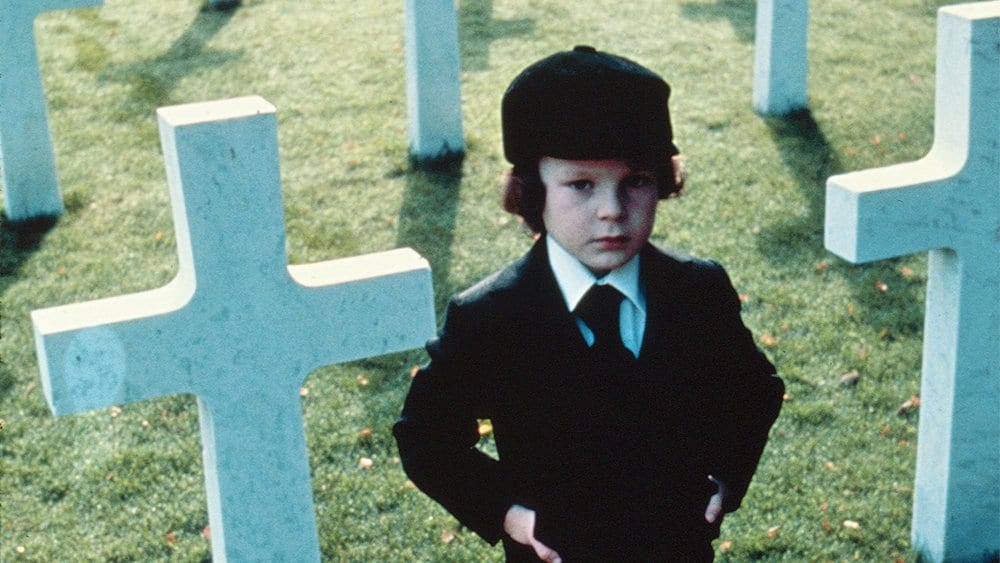 Justin Henry holds the distinction of being the youngest ever nominee for an acting Academy Award at the age of eight years and ten months for his role in this movie. His parents in the movie, Dustin Hoffman and Meryl Streep, both won Oscars in their respective categories. What makes it more outstanding is that he had no previous acting experience and was discovered by his neighbor who happened to be the movie’s casting director. Henry continues to act but has never come close to reaching these incredible heights again. As you may have guessed I am not a big fan of horror movies, but I even think that The Shining is something special. The story of a man slowly spiraling into madness while trying to write a novel in a deserted hotel with only his wife and young child for company is amazingly fascinating. I think it is Jack Nicholson’s finest work. Danny Lloyd was only six years old when he got the role of his son. He got the part after director Stanley Kubrick noticed his levels of concentration during the auditions.

Lloyd never realized they were making a horror movie, he just thought it was a family drama. He went on to make one other movie and then retired at the ripe old age of nine! He is now a biology Professor at a college in Kentucky. 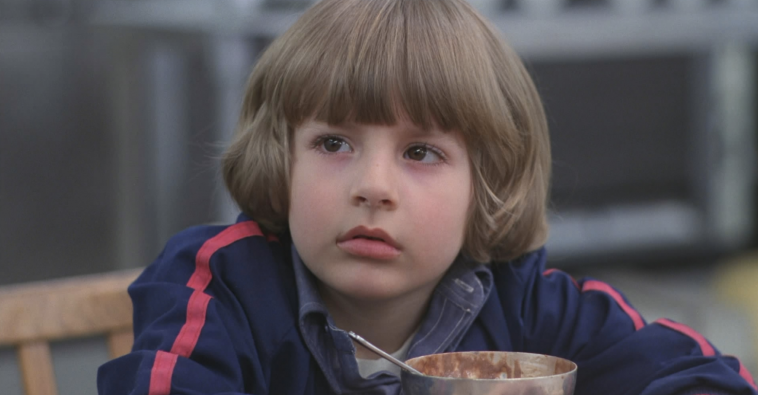 Jonathan Ke Quan (Indiana Jones and the Temple of Doom, 1984)

Temple of Doom is, in my opinion, the second weakest after The Crystal Skull. Ke Quan was twelve years old when he got the part of Short Round, Indy’s wise cracking accomplice. He was born in Vietnam in 1971 and his family received political asylum after the fall of Saigon. In 1985 he appeared in The Goonies as Data. After this he mainly appeared on TV and some Japanese movies. Having studied the martial art of Taekwondo on the set of Indiana Jones, Ke Quan branched out in later years in to the stunt side of movies. Including working as a stunt choreographer on X-Men in 2000.

image via the FW

Scott Tiler played the younger version of Robert De Niro’s character Noodles in the movie. He acted opposite a young Jennifer Connelly who obviously went on to have a very successful career. Tiler appeared in one other notable movie which was John Sayles’s Three O’Clock High in 1987. After some minor roles in movies and on TV, he started to study acting seriously and went on to become the head of drama at an acting college for eight years. He still continues to act and has produced several plays.

Between the age of six and ten Mara Wilson starred in three major movies: Mrs. Doubtfire, Miracle on 34th Street and Matilda. During the filming of Matilda her mother was diagnosed with breast cancer and died just before the movies release (the film was dedicated to her upon its release). It is not hard to fathom the effect of her mother’s death had on Wilson. She would only appear in one more movie, A Simple Wish (1997), before retiring from acting in 2000 to concentrate on her education. It would be 2012 before she would appear on-screen again and that was only in a show on the internet. She pops up sporadically on various platforms and has spoke openly about her struggle with anxiety and depression. This is the only movie Jones has appeared in up to date. She was only ten when she played the role. Since then she has appeared on British television in several dramas. 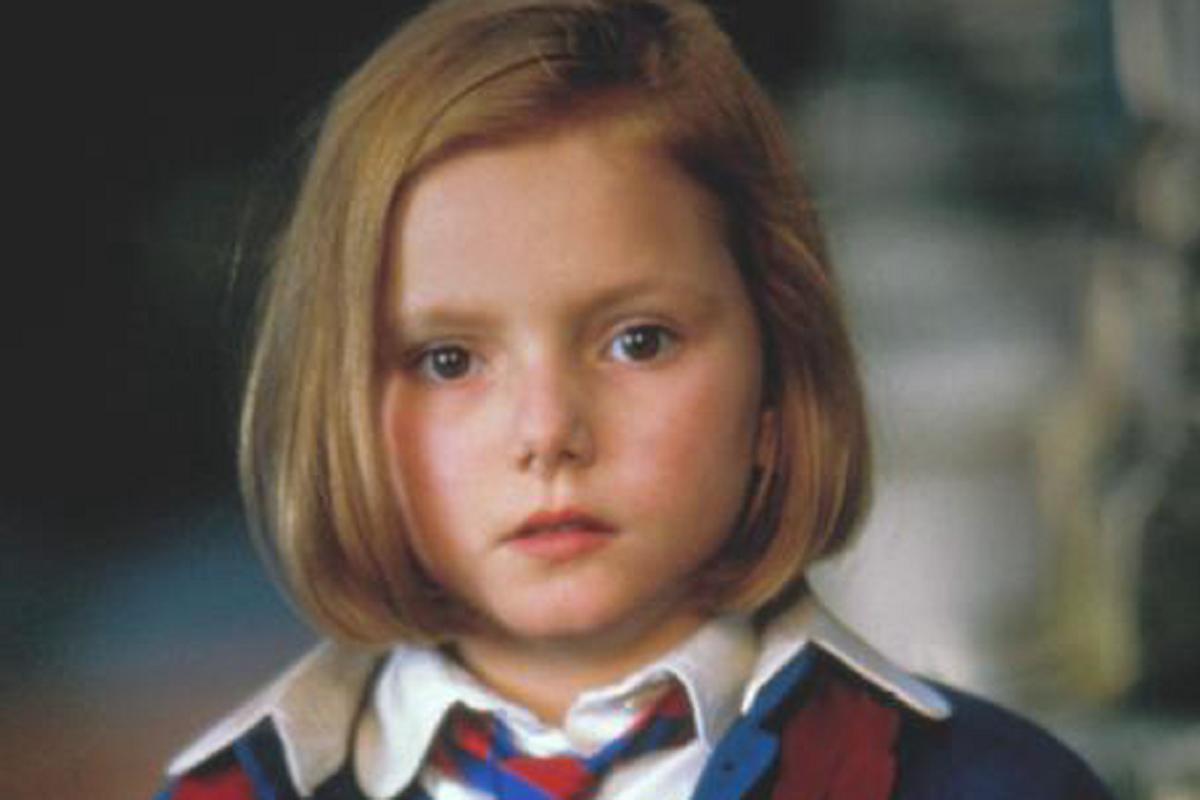 Another one movie wonder, Dillon Freasier played Daniel Day Lewis’s son in this incredible film. The story how Freasier got the role is also incredible. The short version being that his mother who worked as a traffic cop stopped the casting director of the movie for speeding. After a polite discussion about her son the director met him and offered him the role. However his mother was still unsure and had to be shown two of Day Lewis’s movies before she would give the green light. Freasier went on to give an understated but outstanding performance. The biggest surprise is that he has never acted since. 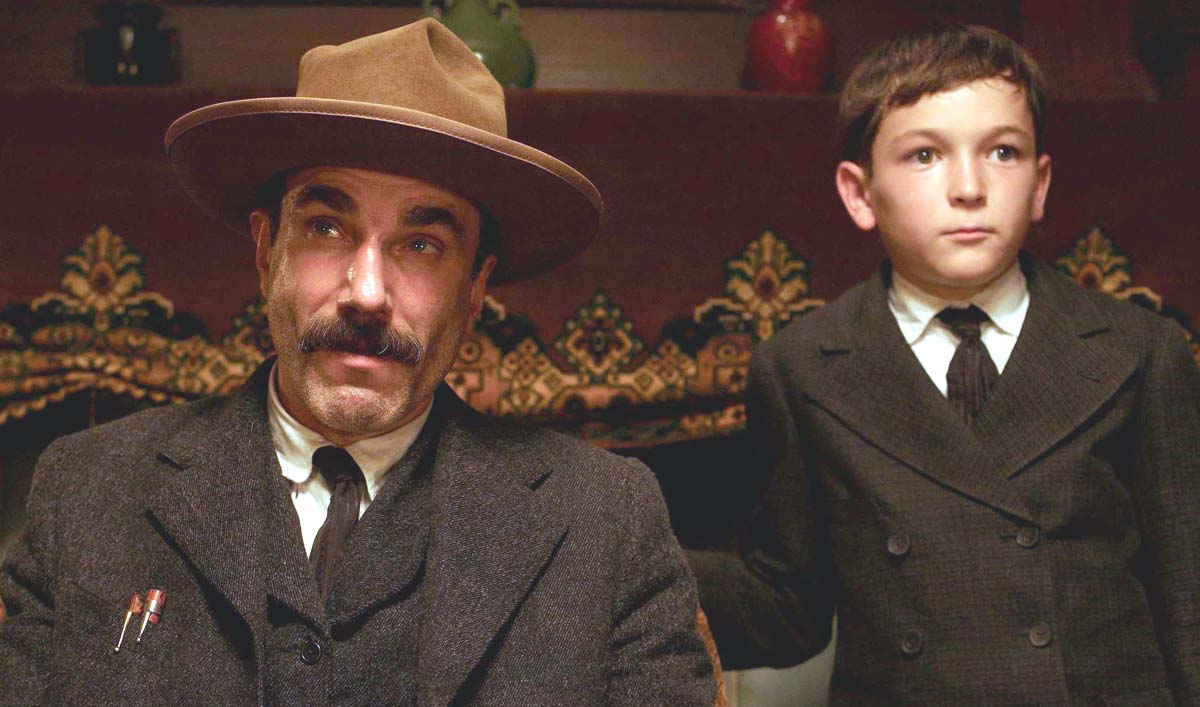 Thank you for reading! What are you thoughts on child stars that never made it as adult stars? Comment down below!

[…] the early 1990s, the child star of the moment was Macaulay Culkin. Back in the day, he was everywhere. Home Alone and Home Alone 2: Lost in New York made him a star. […]

[…] It’s a more heavy-handed technique that would be most likely be berated by an older audience, but I think it’s one that works well for kids. […]

So glad to see Miko Hughes in the honorable mentions. He was my favorite child star for quite a while. The promise he showed in Mercury Rising was never quite realized as an adult.

Charlie Korsmo (ginger from Dick Tracy, What About Bob?, and Can’t Hardly Wait) actually retired and became a lawyer. I love that. :)

I clearly remember watching The Omen for the first time. That kid was so evil I could barely get through the movie.