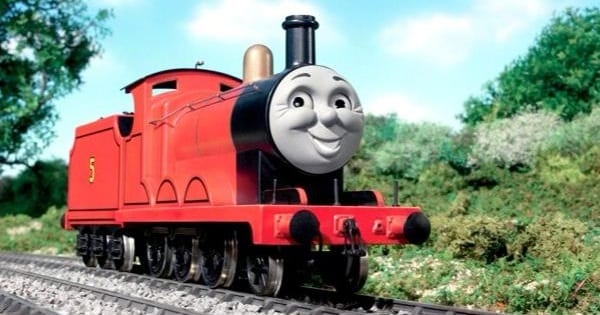 I’ve mentioned this in a few of my other articles before, but I love Thomas and the Magic Railroad (2000). I grew up watching it because I was a big Thomas fan. I’m sure there was a point that I had the whole thing memorized, though that is long in the past. Now, I just get random scenes flashing by in my mind at the most inopportune moments.

For its 20th anniversary, I figured I would re-watch it. I also figured I would use that great social media, Twitter, to document my experience. Looking back on the approximately 60 tweet thread, I think I went a little insane.

Before we start, I’ll just give a brief overview of the story: Mr. Conductor (Alec Baldwin) is sent to Sodor Island by Sir Topham Hatt to watch the trains while Diesel 10 — a large and scary train with a claw — is there. Meanwhile in the real world, Lily (Mara Wilson) is the granddaughter of Burnett Stone (Peter Fonda) and she goes to visit him at his home. Unfortunately, Grandpa Stone is preoccupied with being sad about his train, Lady, that he keeps in a cave and obsesses about quite creepily. Eventually, Lily bridges the gap between the two worlds and ends up on Sodor Island. The movie is spent trying to find the source of the special gold dust that Mr. Conductor uses to travel to and from Sodor Island, as his stash is running out.

One of the first things I noticed was the film score. If you’ve been reading my articles for a while, you’ll know I’m a sucker for a good film score. Surprisingly, Thomas and the Magic Railroad doesn’t have too bad a score. There was something magical and powerful about it that felt like an actual feature film. I’d say it was wasted on a movie like this, but this movie is also the greatest thing ever created so it deserves everything it gets.

After watching Alec Baldwin on 30 Rock, I have a hard time seeing him in any other role, so seeing him as wholesome Mr. Conductor was strange. I quickly concluded that he was on hallucinogens for this film and that the whole thing is just a journey through his drug-addled mind. That theory was only reinforced when we first see Shining Time — the town that Mr. Conductor lives in — which is essentially a Twin Peaks-type town for children.

Thomas and the Magic Railroad leaves many questions unanswered. For example, what are the ages of the trains? They all have adult jobs to do but they all act like children. This was only the first of many questions I would have.

Take a look at Patch (Cody McMains), the film’s 12-year-old boy from Shining Time who befriends Lily (Mara Wilson) and Grandpa Stone (Peter Fonda). This kid is only 12 and yet he acts like the most self-assured little punk ever. I hate him. He also wears like 3 different jackets every day and it quite bothers me. Why is he like that?

One of my biggest questions throughout the movie regards plot choice more than anything else: why spend so much time on sad Grandpa Stone? There are super long scenes where we just hear Grandpa Stone being sad in his cave about Lady, which isn’t very interesting to young kids. Why spend that long on him if you know kids won’t pay attention?

Then there are just the random queries I have here and there, like why is Diesel 10’s claw — which is quite clearly attached to him — sentient and not controlled by Diesel 10? Why did Grandpa Stone not even react when Patch told him that his daughter didn’t come back from their outing together? Who decided to put that background character with the red hair into like every Shining Time scene?

Every time you see either Alec Baldwin or Peter Fonda, they look as though they’re mourning the fact that they’re in a film called Thomas and the Magic Railroad. I’m sure that 80% of the sadness that Grandpa Stone portrays is just Peter Fonda actually being sad that his career has come to this.

However, I cannot forgive Alec Baldwin for ruining my immersion. At one point, he hums the theme song for Thomas and Friends, which he should conceivably not know. Then there’s the fact that he often talks to the camera. Please, Alec. Leave me alone. I want to watch my movie.

Innuendos? On My Good Wholesome Railroad?

There were a lot of strange innuendos that probably weren’t meant to be included in this wholesome family film. For example, Mr. Conductor is having trouble with his sparkle. As harmless as that seems, I cannot hear Alec Baldwin saying it without wondering if there’s a double meaning there.

Then there’s Grandpa Stone who seems to have a very strong relationship with Lady the train. He spends most of his time with her in his cave, alone. He talks about how he “can’t make her steam” (ew). You can even see him reading a book at one point entitled The Romance of Railroads. I really think Grandpa Stone’s obsession with trains is beyond the child-appropriate level at this point.

Oh, and he calls the train “milady” at one point and that’s when I screamed.

Everyone who has ever seen an independent film wants a manic pixie dream girlfriend. You know the type: short dark hair, pale skin, always lost in a daydream, saying things that sound deep but aren’t really. That’s what Lily is in Thomas and the Magic Railroad — my favorite indie film. At times, I like it and other times I want to throw up with how quirky she’s trying to be.

Like, I love that she has a vibrant imagination and she is so friendly to everyone. But I hate that she’s seen as special simply because she chooses to take the fire escape up to her city apartment rather than the elevator like every other normal person. Wow, Lily, you play the harmonica. Amazing, you can climb a tree. You aren’t special, Lily, just annoying.

Thomas and the Magic of Color Theory

I love how Thomas and the Magic Railroad uses color as symbolism. The main characters, Shining Time, and Sodor Island are the only places with any color while everything else is dull and gray. I love how that color theory is used for kids who are more susceptible to the subtle message of film. It’s a great way of encouraging imagination and creativity in the young audience.

It’s a more heavy-handed technique that would be most likely be berated by an older audience, but I think it’s one that works well for kids.

Honestly, what an acid trip this film is nowadays. It’s not that it’s super trippy or surreal or anything, but I have so many memories of Thomas and the Magic Railroad mixing with how I see it now and that cognitive dissonance is astounding.

Enough about me, though. What you need to know about Thomas and the Magic Railroad is that it is fun. It’s a movie that cares about its audience and does its best to cater to them. It’s a movie with heart and a desire for its viewers to go away feeling rejoiced. Like the title says, it’s a magical ride through childhood and fantasy.

Also, it’s pretty funny to watch as an adult.

Thank you for reading! What are your thoughts on Thomas and the Magic Railroad? Comment down below!

[…] was heavily inspired by our own Kali Tuttle, and her masterpiece on the 20th anniversary of Thomas and the Magic Railroad. Kali live tweeted the movie as part of her process, and I thought that was genius. So, I asked her […]

[…] Honestly, if you’re not as in love with Nicolas Cage as I am, it’s probably not worth your time. But if you just want to kill about an hour and a half during quarantine, not a bad way to go. As for me, I think I’ll go back to watching Thomas and the Magic Railroad. […]

The Journey of a Film Buff: My Movie...