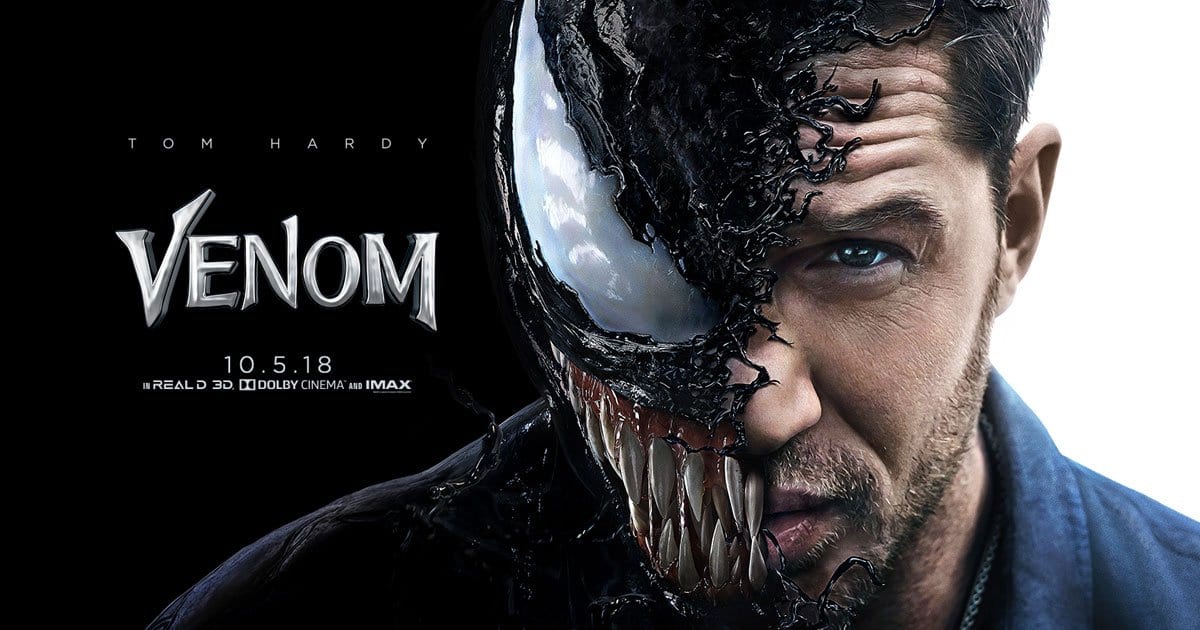 Venom is one of the down-right coolest comic book characters of all time. His status as an icon is almost to the level of villains such as the Joker and Lex Luthor. After a botched attempt at bringing the character to the screen in Spider-Man 3, Sony has returned for another iteration. Does it live up to the hype?

Sort of. Venom shines in many ways, but overall the film is about as crooked as the titular character’s fanged teeth.

The following review will be spoiler free. That being said, “surprise” content revealed in the trailers will be discussed.

Eddie Brock (Hardy) is a reporter, and he finds himself questioning things that the government may not be looking at. One of those things involves Carlton Drake’s (Ahmed) Life Foundation, and their illegal experimentation on society’s most disadvantaged. Carlton Drake seeks to bond humanity with a species of alien Symbiotes that have crash landed on Earth.

When Eddie breaks into Drake’s lab and bonds with a Symbiote, he is thrust into the midst of a war that he knows little about. Partnering with his ex-girlfriend Anne Weying (Williams), Eddie must learn to embrace the Symbiote in order to bring down Drake and prevent all out chaos.

I am a huge web-head. I will consume anything Spider-Man; except for The Amazing Spider-Man series, those two films are dead to me. I grew up with Sam Raimi’s Spider-Man Trilogy, and Spidey’s universe has always been an obsession of mine. When Venom was first announced, I was thrilled. It appeared as if Sony was learning its lesson. Then they released a trailer without any Venom in it.

My expectations for this film have been low ever since they started marketing it. No Spider-Man, no iconic Symbiote storyline, none of the foundational stuff that makes Venom so engaging. While it is possible to build a great Venom storyline without all this, the best ingredients were left out of the mix. Still, I held some hope for the R-rating, expecting Venom to double down on what makes him different from Spidey.

After it was announced that the film would have a PG-13 rating, I lost all hope. Coupled with poor early reactions, I was beyond lack of hope. That being said, having seen this movie, it is not as bad as you might expect. It’s still bad, but not without its share of entertainment.

This picture basically sums up the plot. This out of focus image of two guys vaguely fighting inside of a CGI blob of Symbiote is about as coherent as the plot. The largest issue with plot is the pacing. The first act of the film takes up almost half of the entire runtime. Venom as we know him doesn’t even appear until near the one-hour mark. After the anti-hero appears he is rushed through an incredibly clunky second act that almost doesn’t feel like an act at all. The film then proceeds to devolve into a CGI fight that feels boring and unpolished.

It’s been said several times over on the internet, but this film genuinely feels as if it was supposed to come out in the 1990’s alongside Batman Returns or Blade. The film falls into the early superhero blockbuster clichés of world-domination, shortcut character work, and cheesy fight scenes. Carlton Drake in particular is an embarrassment to comic book movie villains. In a year when the MCU has given us dynamic villains such as Killmonger, Thanos, and Ghost, Carlton Drake/Riot falls embarrassingly short of being a well-developed villain.

Eddie and The Symbiote 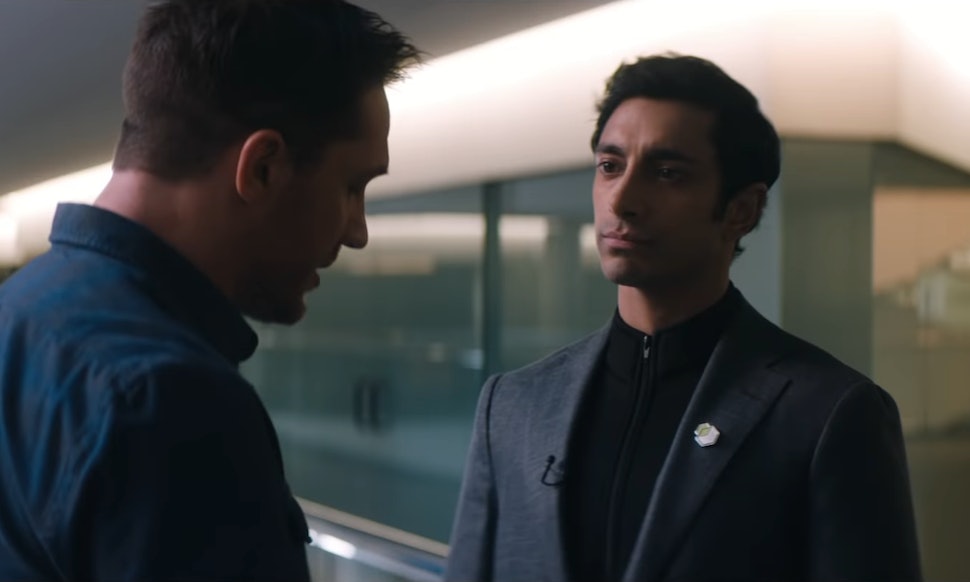 Venom is most definitely Eddie Brock’s movie, but it’s Venom’s fight. Eddie is the clear focus of the movie and he has a legitimate, albeit flimsy, beef with Carlton Drake. Drake is a shady mogul and he costs Eddie a lot, so it makes sense that Eddie would confront him once bonded with the Symbiote. That being said, the Symbiote is developed into a unique character of his own, meaning that the conflict has to be entered into as a duo. In order to balance this, Drake is bonded with Riot, the Symbiote leader. Power-wise, it is a pretty even match. However, there is little meaning in the conflict.

As stated above, Eddie is clearly headed towards a conflict with Drake. While it is flimsily motivated, it is at least clear-cut and makes sense. However, once the conflict arrives, Eddie and Drake take the backseat to their counter-parts CGI slosh battle. In fact, I’d venture to say that both human characters are virtually irrelevant in the final conflict, with the entirety of the battle and its consequences being controlled by the Symbiotes. So why do Venom and Riot fight? For flimsy, flimsy reasons.

Violence is the Answer 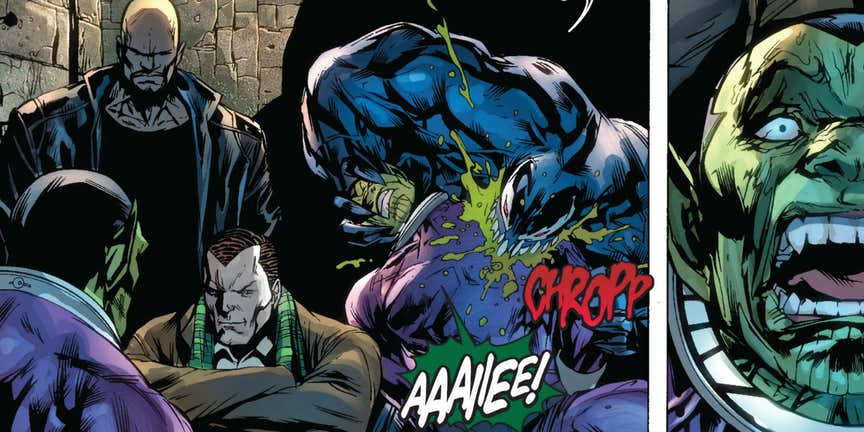 Venom is not a children’s comic book character. The Symbiote is renowned for his propensity to bite of heads, flail his tongue, and consume people for the sake of his survival. This film was promoted heavily on the idea that that is who film Venom would be. After R-rated hits such as Deadpool and Logan, it felt like this could actually happen. But, Sony got in the way and slapped a family friendly PG-13 rating on for the sake of making a few extra dollars. Instead of having Venom brutally dismember people and eat them, we have a quick camera cut and a side character making a joke about someone getting their head bitten off.

The only real separation between Venom and the average superhero film is that there are a few scenes in which the Symbiote heals a thoroughly broken and cut up body. However, much of the goriness of these scenes is hidden behind clothes and CGI Symbiote skin.

Venom is a Bad Guy?

Suicide Squad is often a blacklisted phrase when it comes to talking comic book movies. Nonetheless, some of the DC film’s failures are evident in Venom. Most particularly is the fact that Venom as a character does not blur the lines between good and evil as much as he should. In the comics, this blurriness plays out well because Venom starts as a hero, with Spider-Man, and then slowly reveals his vile nature, becoming a villain. In the film, Peter Parker/Spider-Man is gone, and we are presented with a conscience heavy Eddie Brock. Eddie helps people, that’s his media shtick.  So, it is hard to see Eddie as a villain, especially when his fall from grace is glossed over in a six month time jump.

The Symbiote also struggles from a sudden shift of heart, especially when compared to Riot. The problem with this film, and Suicide Squad, is that the story can’t juggle two bad guys. Instead, both films clearly establish the good in the protagonist bad guys and shoehorn in as much evil as possible for the antagonist bad guys. That, unfortunately, is how you end up with bland villains such as Riot and Enchantress. They are only more evil because other characters say so, and because they have a MacGuffin scheme to end the world.

On the other side of this equation, Venom is a good guy only because there is a badder bad guy. As mentioned in the plot section, Venom changes his mind on a dime. In one scene he is content on being a parasite and sucking the life out of Eddie, in the next he loves Eddie and is ready to save the world. While it isn’t necessarily a bad thing that Venom takes a turn toward heroism, it just isn’t executed fluidly and both the film and character suffer from it.

Avi Arad is the Venom of people. One minute he’s helping deliver Spider-Man and Spider-Man 2, the next minute he’s destroying the franchise with Spider-Man 3 and the Spider-Man duology that must not be named. Then, a bright ray of hope in Spider-Man: Homecoming, but followed by another fall from grace with Venom. Sony, particularly Avid Arad, needs to slow down and world build.

Theoretically, Venom is the Thanos of Spider-Man’s web of characters. He challenges the wall-crawler in a way that few others can, and he almost always has the upper-hand. Marvel Studios took ten years to bring Thanos to light, and they spent six years before his full debut developing the Mad Titan and the state of the MCU to come together in perfect unison. Sony spent one year in the MCU and then threw Venom into a world that may or may not have Spider-Man in it. They should either start sharing the full rights with Marvel Studios or hire someone like Kevin Feige who can oversee the big picture to the best of its potential.

To say that Venom is rough around the edges is an understatement. However, the character lives up to most of his antics despite falling short on the violence and gore. The banter between Eddie and the Symbiote gives the film a much-needed boost of charm. This film doesn’t stand with the likes of The Dark Knight or Infinity War, but there is potential to do something great. In other words, there is great power, but not nearly enough responsibility. You won’t love it, but you’d be hard pressed not to enjoy it in one way or another.

Finally, the first post credits scene is fantastic. Stick around until the end for this one.

Thank you for reading! What did you think about Venom? Comment down below!

The movie isn’t perfect, but I think it gives Sony something to build on with the sequel. Yeah, the Amazing Spider-Man movies weren’t great. Thank goodness that Homecoming returned to the form of Raimi’s films.

It wasn’t as terrible / horrible as some are making it out to be (it does have some entertainment value to it), but it’s definitely flawed and messy.