‘Pleasantville’ 20 Years Later – How Has the Film Stood Up Over Time? 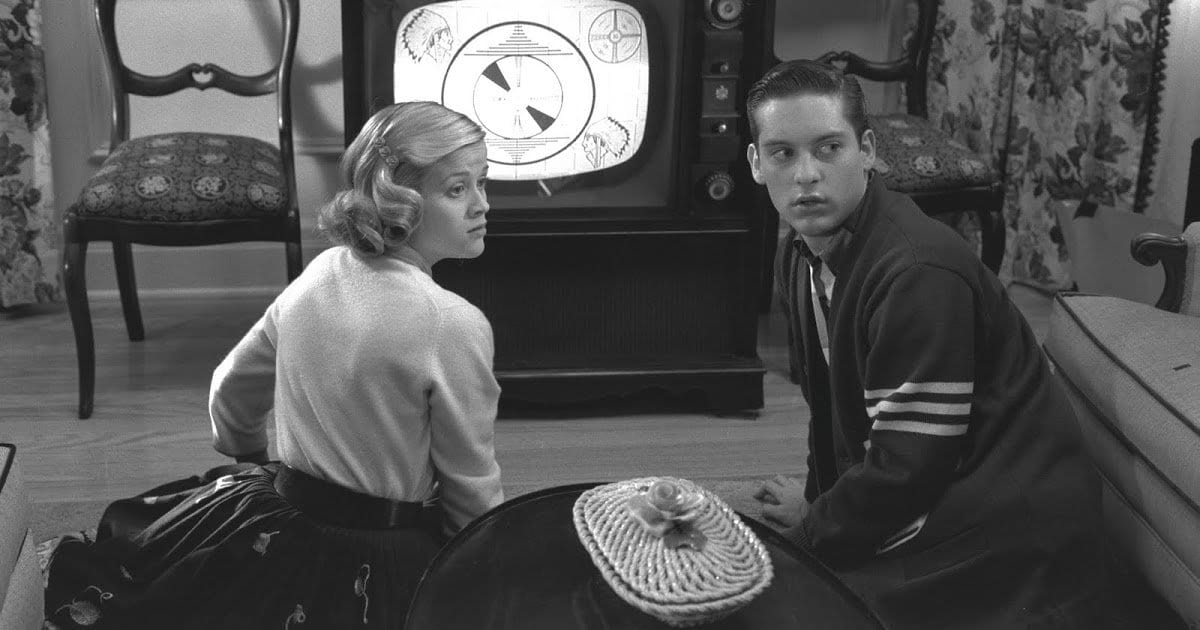 The family sitcoms of the 1950’s presented the image of a perfect white middle-class suburban family. Dad went to work at an unknown office job and Mom not only kept an immaculate house, but looked like she rolled out of bed with perfect hair, perfect makeup and clothes that were fresh out of the closet. While the children misbehaved, it was never to the extreme. They were gently reprimanded and whatever the problem of the specific episode was, it was solved by the time the credits rolled. While this is still a fantasy for many television viewers, then and now, it does not reflect the reality of American families. The 1998 movie, Pleasantville, explored and exploded the idea of the ideal American family on television. 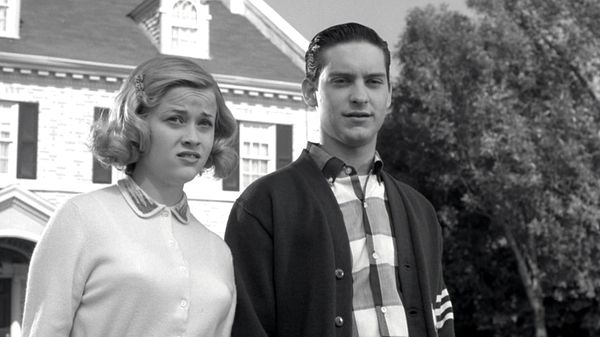 Just in case you have trouble recalling Pleasantville, the film starts in the then modern era of the late 1990’s. Teenage siblings Jennifer (Reese Witherspoon) and David (Tobey Maguire) disagree with how to spend a Saturday night. Mom is in and out of the house and Dad is never mentioned. Popular Jennifer is eager to go out on her date. Introverted David is a fanboy of the 1950’s family sitcom, Pleasantville (a la Father Knows Best or The Donna Reed Show). Jennifer wants to watch MTV until her date picks her up. David wants to watch a Pleasantville marathon. There is only one television and therefore, one remote control. The battle over the television remote results in breaking the remote.

Enter the mysterious TV repairman (Don Knotts). He somehow knows that not only is the remote broken, but David is a Pleasantville superfan. After quizzing David about his knowledge of Pleasantville, he gives David an odd-looking remote and leaves. David and Jennifer continue arguing until they somehow find themselves in Pleasantville as Bud and Mary Sue Parker, the main teenage characters on the show. They try to find a way to blend in, but they end up turning the world of Pleasantville upside down.

The Analogy Of Black And White And Color

Many filmmakers will add special effects in post-production to create what cannot be created on a physical set by physical actors. But only a few films use special effects not just to tell the story, but to add layers to the narrative and character development. Pleasantville is one of these films. In this film, colors are not just colors.

They are used as an analogy of where a character stands at a particular moment in the course of the narrative. Characters in black and white are safe, static and unchanged. Characters in color are dynamic, taking chances and fully fleshed out as human beings. The movie also brilliantly uses color to tell the story of injustice and prejudice towards others who look different. Using the image of the 1950’s television sitcom, the colors show how racism and prejudice can divide people based on something as skin deep as skin color.

image via The Information Store

Many young actors often start off their careers by playing teenagers or early twenty somethings. Sometimes, they play characters that are predictable and just plain boring. Neither Jennifer or David can be labelled as predictable or boring. Jennifer starts the film as the typical popular teenage girl whose focus is boys, friends and clothes. By the end of the film, she has a new outlook on life that goes beyond the stereotypical boys, friends and clothes. For his part, the audience meets David when he is at his nerdiest, wall flower fanboy phase. By the time the film is over, David not only has confidence, but he understands that life is not always black and white (back to my previous thoughts on color in the movie). One has to take risks and fight for what they believe in, if they are to grow as a human being.

20 years after its initial release, Pleasantville still stands out. It’s not just the story of two modern teenagers who are zapped into a 1950’s family sitcom. It’s the story of the ideal vs. reality, staying still vs. moving forward.

Thank you for reading! What are your thoughts on Pleasantville? Comment down below!

20 years? Surely not! Yep – very strong and deep sci fi fantasy storytelling with some superb and memorable scenes (the mother in the bath being one). I still can’t hear a fire engine go by on the street without shouting “cat”!

I agree with your comments wholeheartedly! Pleasantville is a remarkable movie.