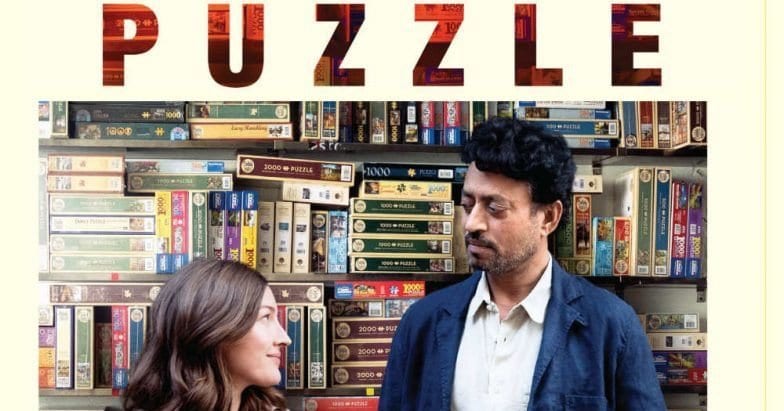 Puzzle (2018) might be a rare gem.  A foreign-born story that successfully migrates in to the U.S.

One of the least tapped sources for American screenwriting material is foreign language films.  Popular American culture favors big budgeted blockbuster features with high-tech special effects, kinetic action, and comic style heroism that denies the everyday reality we all live in.  Anything but what the typical foreign movie consists of.  So on the occasion when one manages to penetrate the Hollywood curtain, it more often is relegated to independent status, and a limited release with little marketing.

Puzzle (2018) is a recent example.  Based on Argentine production Rompecabezas (2010), this gem packs a wallop.  Despite the fact that all the characters who populate it are like the folks you know from down the street.

Agnes (Macdonald) is a suburban Connecticut housewife and mother who volunteers at the local Catholic church.  She cements her life in such a routine that she anticipates the activity of everything and everyone in it.  Her routine begins to change when she receives a jigsaw puzzle for a birthday gift.  This item becomes the catalyst for Agnes to rethink what the focus of her life should be.

Agnes sees herself as the mother of a high school senior Gabe (Abrams) and a live-in adult son Ziggy (Weiler).  And she’s the faithful wife of self-employed auto mechanic Louie (Denman).  But when she decides to become a competitive jigsaw puzzle solver, Agnes starts to question her role in the family.

What follows is a humorous adventure into the realm of social taboo, and the process of self-actualization.

The original Argentine version is a quarter of an hour shorter at 87 minutes.  Written and directed by Natalia Smirnoff, it stars Maria Onetto in the role Macdonald embodies.  Others compare Puzzle to the French language film Queen to Play, or Joueuse (2009) starring Kevin Kline and Sandrine Bonnaire, about a woman who discovers her prowess in chess and reevaluates her life priorities.

Sony Pictures Classics contracted Puzzle after it debuted at Sundance.  The Big Beach production company’s most noteworthy film to date is probably Sunshine Cleaning (2009) starring Amy Adams, Emily Blunt and Alan Arkin in an award-winning appearance. However my most memorable Big Beach movie is the fact-based drama Loving (2016), which traces the precedent setting U.S. Supreme Court decision on interracial marriage.

Founders Marc Turtletaub and Peter Saraf have a stated goal of providing inspiring entertainment that is intelligent and character driven.  That theme is clear in all three films.  However, if character driven is also a euphemism for low budget and limited action, it fits the bill too. 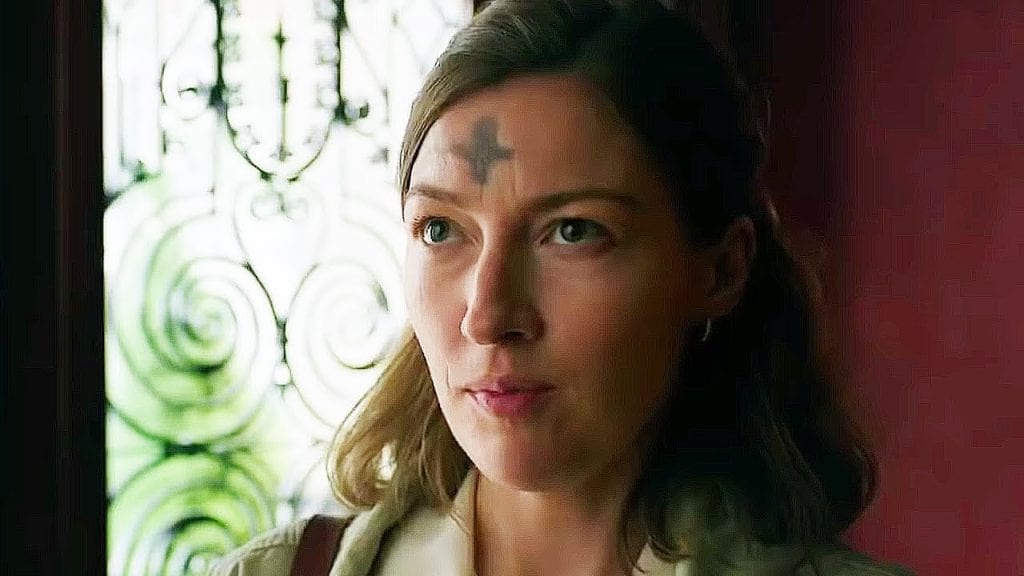 Agnes begins her intellectual journey by demonstrating her genius in solving puzzles.  She reflects that she was always good in math at school.  Her priorities are family and church.  Why not education or a career outside the home?  Her heritage is that of a humble eastern European immigrant ancestry.  Agnes recalls her mother for whom marriage and motherhood was the sole available option.

Her life committed exclusively to church and family, Agnes has to find time to fit her new avocation into her busy schedule.  Her awareness is piqued that the men in her life act as if they neither appreciate her opinion, nor respect her wishes.  Consequently, she decides to hide her commitment to her new hobby.  Louie might not approve.

What Macdonald shows us is calculating thought, metaphorically mathematical, often carefully choosing her actions as well as her statements.  And she captures the simplicity and directness of this sincere, yet sad woman in mid-life crisis.  You find yourself wanting to root for her, but fearful of the consequences because Macdonald makes us very aware of what’s at stake.

The best character in Puzzle is played by Agnes’ competitive playing partner Robert (Khan).  He is the best friend she apparently never had, yet always needed.  Because he is the only person who sees Agnes for who she is, Agnes is able to understand her true self for the first time in her life. 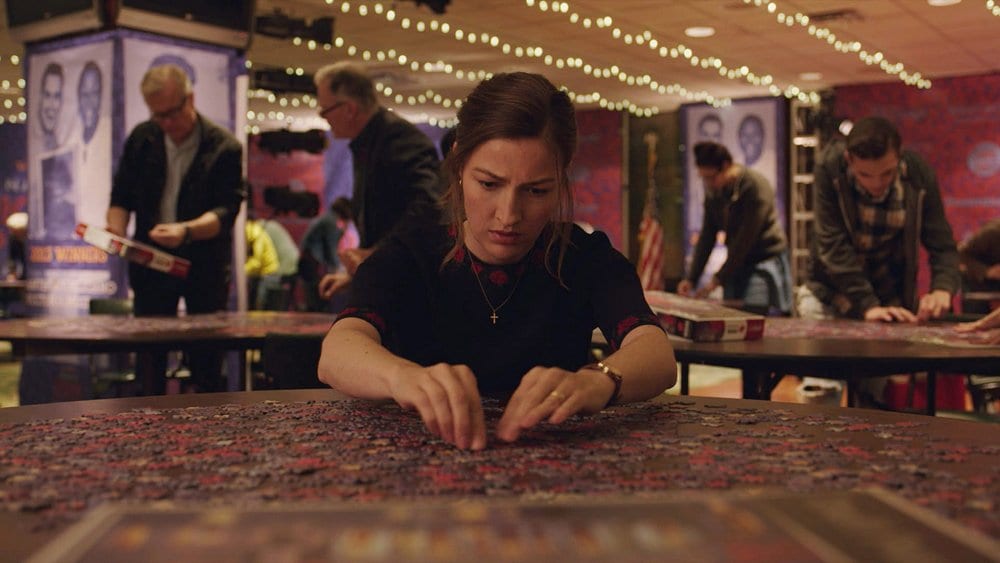 In order to address the conflict in her life Agnes considers breaking not only her treasured traditions, but also her value system.  What unfolds is a story of discovery, whereby a person becomes aware of a world that she never knew existed.  That creates temptation, turmoil, and potential for trouble at every turn.

What makes Puzzle different from similar films is that Gabe isn’t the stereotypical smug teenager, although his girlfriend Niki (Hewson) most certainly is.  It’s as painful to watch her cliché as it is to watch Ziggy mope around the auto shop.  And while Ziggy isn’t the typical adult slacker boomerang child living at home with mom and dad, neither is Louie the Neanderthal he might first appear to be.

Louie is interesting because he knows he’s his father’s son.  But he’s determined not to make the same mistakes.  Neither Agnes nor Louie went to college, but he bears it as a badge of honor, with utter class disdain, dismissive of Agnes’ feelings.  It would be an easy conclusion to jump to, if he was solely to blame for Agnes’ plight.  You can’t though because she is just as guilty.  Nothing Agnes does or says implies she wasn’t complicit in establishing her subservient position in the family dynamic.  So it is incumbent upon her to decide what to do about it.  And for the others to react to her transformation. 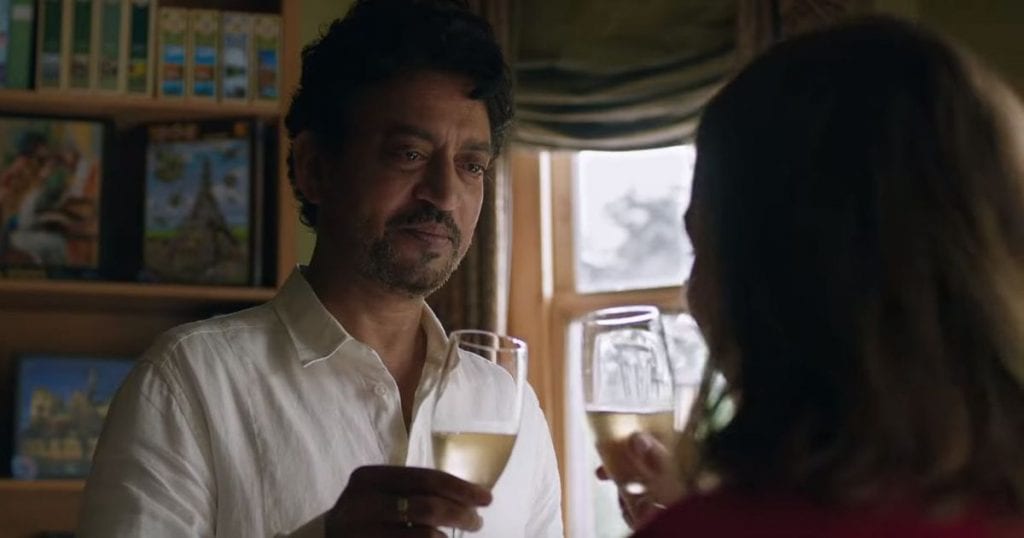 Pivotal Pieces of the Puzzle

There are two pivotal scenes that exemplify what takes place in Agnes’ world.  Her birthday party and the Easter party.  Both are emblematic of American cultural tradition.  And like the Agnes we meet in the beginning of Puzzle and the Agnes who will emerge from the chrysalis in the end, they stand as stark contrasts from one another.

These are classic set pieces that communicate the tragic hilarity of Agnes’ life.  You want to laugh and cry at the same time.  For me they bring to mind Working Girl (1988) when Tess McGill (Melanie Griffith) must not only overcome the chauvinism of her boss Katherine (Sigourney Weaver) and her boyfriend Mick (Alec Baldwin), but also the doubt of her best friend Cyn (Joan Cusack).  Irrfan Khan gets the enviable task of being the stand in for Harrison Ford.  He’s the cheerleader Agnes needs to stand up against her oppressors.

In Puzzle Agnes fights the chauvinism of her husband Louie and her son Gabe while identifying her self-doubt which she recognizes in her own son Ziggy.  Pivotal scenes for Tess include her birthday party with Mick’s marriage proposal that she doesn’t accept and the Trask wedding reception. I’ll argue that Working Girl is both better and more timely.  But Puzzle is still fun viewing. It also still regrettably identifies with some parts of America today. 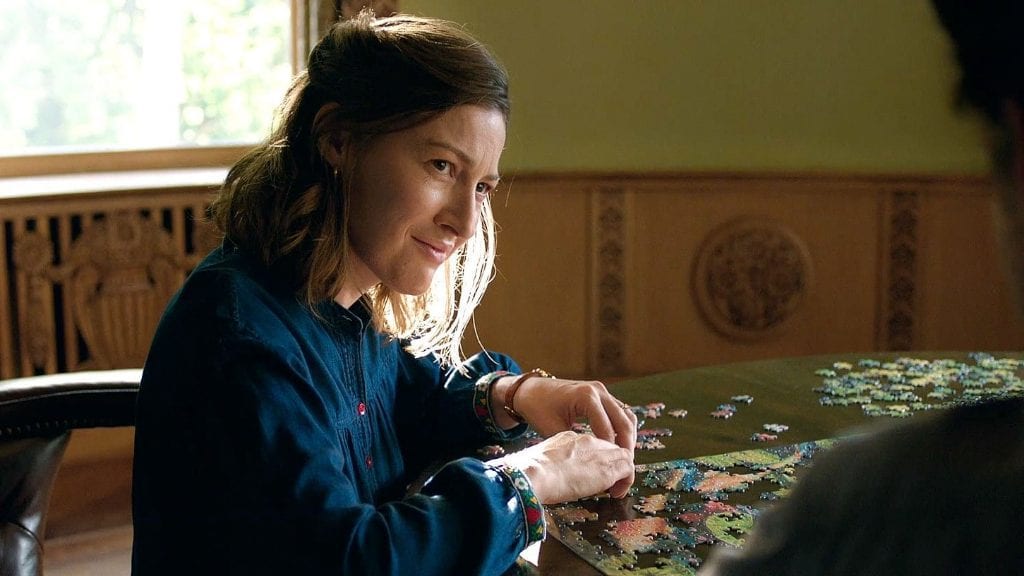 Puzzle accomplishes what few films rarely attempt.  To separate both the value of motherhood and the sanctity of the marriage contract from the dignity of the individual.  What Agnes rebels against isn’t a feminist defined visualization of the 20th century stay-at-home mom.  It’s the disregard for her person-hood, wisdom, voice, and the vote she casts to decide her future and the fate of her family.

Because it’s a thoughtful story intelligently told, you appreciate it.  And because Agnes is so perfectly portrayed, you enjoy her journey.  The laughs are just an added bonus. 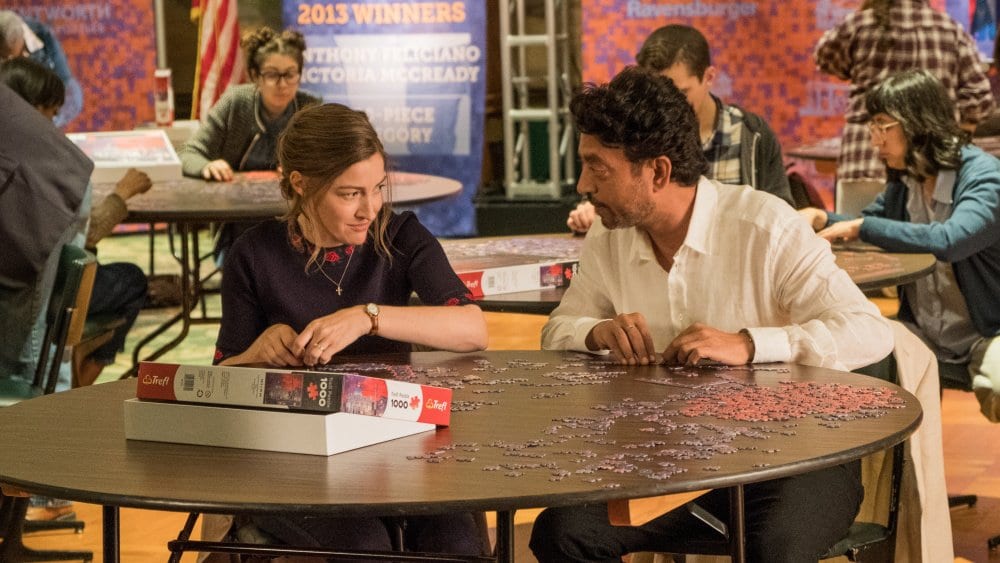 Thank you for reading! What are you thoughts on Puzzle? Comment down below!

This film reminded me a lot of Shirley Valentine. I don’t see it as a ‘midlife crisis’ where she is a victim wishing for a different life, but as an ‘awakening’ to the power she has to actualize her brilliant reality. The ‘alternative ending’ was definitely a poor fit to the point of the story, so Marc Turtletaub made the right choice. I am very curious to see the Argentinian version which was created by women. Although the theme is timeless, I think we are in a particularly good moment to let women know that they are not alone in feeling done with patriarchy – that the traditions and routines that men find comforting are hindering the evolution of our species. As Winifred Banks says in Mary Poppins, “Though we adore men individually, we agree that as a group they’re rather stupid”… unfortunately even the exotic, exciting ones like Irrfan Khan’s character can become needy and attached. Ziggy is a glimmer of hope for the next generation – take your cues from the matriarchs in your lives, children!

OMG! Irrfan Khan. I absolutely loved him in The Darjeeling Limited. He was so expressive, even with very little dialog. I’ve been wanting to see more of his work. I’ll be checking this out.

He is very endearing in Puzzle