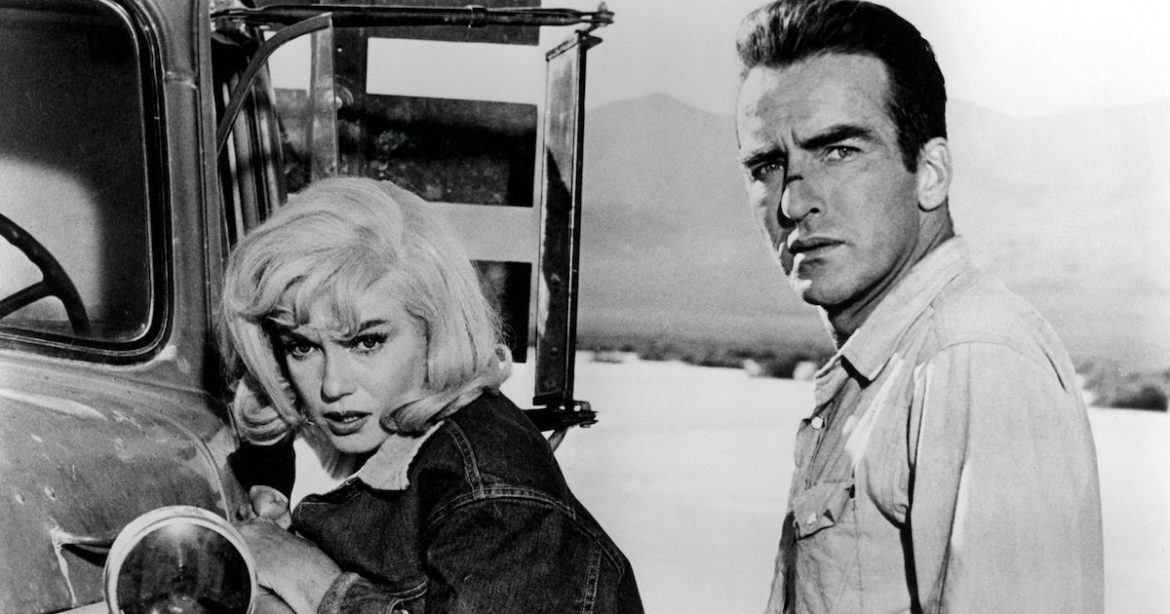 The Misfits is quite an obscure little movie. Despite it being the last performance for both Clark Gable and Marilyn Monroe, it isn’t talked about quite enough. Many people most likely don’t even know it exists.

My first experience with this movie was after getting my wisdom teeth out. I was quite out of it and a little bit nauseous, so I was understandably confused. The plot didn’t quite make sense to me and the whole thing seemed to drag. Also, I kept falling asleep so I’m pretty sure I missed some relevant plot points. It ended up not making a lot of sense to me.

Yet, revisiting it, I realize now that it was the perfect sendoff for both Gable and Monroe. It’s haunting and it stuck with me — exactly what you would hope a final film would do.

The Misfits isn’t exactly your typical Western film. It doesn’t take place sometime in the 1800s or early 1900s. There aren’t any dramatic shootouts. It takes place in modern times (which, in this case, would be the late 1950s and early 1960s) and it revolves around modern problems. Instead of carriages and horses, our main characters drive slick-looking cars from the 60s.

Gay Langland (Clark Gable) is a cowboy who makes a living rounding up wild horses and then selling them to slaughterhouses. Roslyn Taber (Marilyn Monroe) is a recently divorced free spirit who falls in love with him. The movie also features supporting performances from Eli Wallach and Montgomery Clift as they came into their own stardom of the 60s. It’s a passing of the torch, in a way.

Overall, it’s much more poetic and slow-moving than your regular Western. It doesn’t necessarily capture your attention the way a gunfight or a fistfight or a horse chase might. The Misfits is more of an examination into the human psyche than a fun Western, which is equal parts interesting and boring.

Clark Gable and Marilyn Monroe are arguably two of the biggest movie stars of all time. Clark Gable has classics like Gone With The Wind (1939) and It Happened One Night (1934) in his repertoire; Marilyn Monroe is the star of greats like Some Like It Hot (1959) and The Seven Year Itch (1955). So, when I first watched The Misfits, I felt dissatisfied. It wasn’t a go-out-with-a-bang type of movie for the two stars who would pass away soon after. Yet, it may have been the best kind of film for the two to finish their film careers with.

Gable had a relatively tumultuous love life, being married five times with dozens of affairs in between. His third wife, fellow actress Carole Lombard, may have been the most promising match for him, but she unfortunately perished in a plane crash in 1942; this would leave a dark cloud over Gable for the rest of his life. Overall, it seemed like Gable was destined for a life on his own, which I feel that The Misfits mirrors quite well.

Monroe had a life that was sexualized and sensationalized to death, literally. Throughout her life, she was only seen as a sex symbol. To America, she was the ditsy blonde with a nice body. Very few people would get to know the real Marilyn during her lifetime. The Misfits also mirrors this, as only Gay seemed to truly understand Roslyn while the other men in the movie only seem to see her as an object. Even Gay at times forgets that Roslyn isn’t just a sex object — she’s a woman.

I’ll admit that The Misfits isn’t super rewatchable. It drags quite a bit and everything is just so dramatic. It doesn’t have the same romantic lure as a classic Clark Gable film, nor does it have the slight comedic charm that Marilyn Monroe films have. Instead, it dumps melodrama and morals on you while also expecting you to do some heavy critical thinking.

After one viewing, I feel like you’ve gotten everything you need to from The Misfits. You understand the loneliness that Gay and Roslyn feel as well as the pull they feel to each other. The ham-fisted moral lessons about the wild horses that Gay rounds up and sells have hit the mark. And you’re more than a little tired of staring at the barren landscape of the West. It just doesn’t warrant a second viewing, in my humble opinion.

The best way to describe The Misfits is haunting. Being the final film for two major Hollywood stars is haunting enough. Every scene is literally history unfolding before your very eyes. You’ll want to drink in every moment because it’s the last time you’ll see these two people again. It’s like watching two ghosts.

The setting itself is haunting as well. Something about empty deserts has always been eerie. It mirrors the lonely tone that this movie tries to portray. Loneliness in itself is a haunting emotion. This whole movie is just an eerie look at love and loneliness and all the drama that comes with it.

Yet, even though it’s not a movie that I really want to watch again, The Misfits is truly a great final film for two world-renowned film careers.

Except when you watch it on heavy painkillers after getting your wisdom teeth pulled out.

Thanks for reading! What are your thoughts on The Misfits? Comment down below!