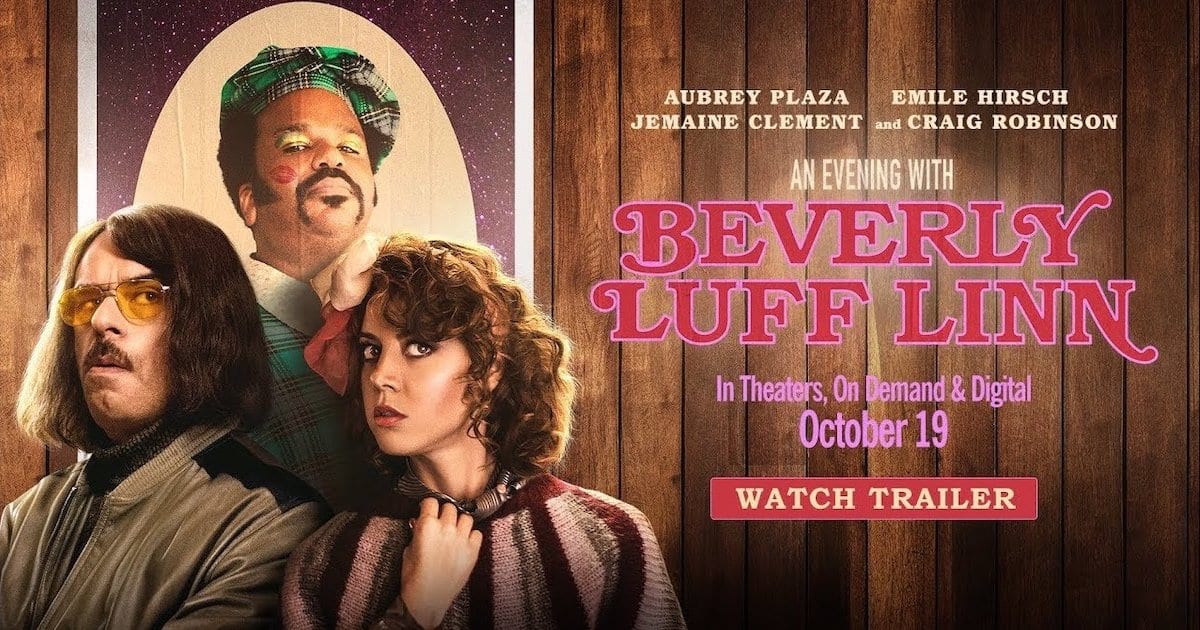 After creating The Greasy Strangler in his feature-length debut as a director, Jim Hosking has made a bit of a cult following for himself. With An Evening with Beverly Luff Linn, he’s established his off-kilter sensibility as something to expect in every single one of his films…and that his films definitely won’t be for everyone.

Lulu Danger (Aubrey Plaza) is stuck in a loveless marriage with Shane (Emil Hirsch), an air-headed narcissist, who only cares about his position as a manager of a mildly successful coffee shop. Lulu still pines for her ex-lover, Beverly Luff Linn (Craig Robinson), who is soon to open a “magical show” in a local hotel.

When Lulu reminds Shane that her brother Adjay (Sam Dissanayake), a devout vegan, has saved more money than he has, he becomes incessantly jealous. He leads his dimwitted but loyal baristas (Sky Elobar and Zach Cherry) on a ridiculously simplistic but surprisingly successful heist of Adjay’s savings.

Adjay then hires the work of a benevolent passerby Colin (Jermaine Clement) to retrieve his money. When Colin crashes Shane’s party and threatens him with lethal force — not very convincingly I might add — Lulu uses that opportunity to leave Shane by banding together with Colin. Since Colin isn’t domineering, she convinces him to stay at the local hotel where Beverly Luff Linn will soon perform, hoping to rekindle her love affair with Beverly Luff Linn.

But she’s not the only one desperate for the affections of another. Besides Colin and Lulu, there’s also Beverly’s over-protective manager, Rodney Von Donkensteiger (Matt Berry), who wants the artist all for himself and sabotages all of Lulu’s romantic gestures. At the same time, Shane hopes to win back Lulu and instructs his barista hooligans to follow him along the way.

Jim Hosking’s debut film, The Greasy Strangler, was one of my favorite films of 2016. Not only that, I consider it one of the funniest films of recent years. This is an opinion not everyone will share since The Greasy Strangler is truly an acquired taste. To say you’ll either love it or hate it is not strong enough. You’ll either love it or you’ll hate it so much, you’ll want to burn every copy imaginable. Some will revel in the awesomely awkward line delivery from the main cast and the excessive nudity from less-than-traditional good-looking people, while others will consider it the stupidest film they’d ever seen.

At the same time, those who will dismiss it will also miss out on the film’s deeper subtext. Even though it features copious amounts of fart jokes, it’s also a strangely thoughtful film. In its core, it’s a hilarious study of a deeply dysfunctional father/son relationship — and it’s also about a serial killer who likes to cover himself in grease before he murders people.

The Signature Quirky Style is Still There, But…

It’s obvious from the film’s opening scene that this is a Jim Hosking film. The unnatural and sometimes hammy delivery from its performers are part of his directing style. Even though this film stars more famous people, they still manage to blend in perfectly in Hosking’s silly universe. (Though comedian Matt Berry’s straightforward and completely earnest delivery of wacky dialogue has always been his forte so for him, it wasn’t much of a stretch.)

Though the film isn’t bereft of nudity and foul language, it is however more subdued than Hosking’s predecessor. It’s never excessive in silly depravity. The humor comes mostly from character quirks rather than fart jokes or excessive displays of nudity and sexuality.

It certainly shows that Hosking’s depends on shock value and can create a more straightforward character study. Even though I adored the shock value of The Greasy Stranger, I didn’t mind the lack of it in An Evening With Beverly Luff Linn since, like Hosking’s predecessor, it was absolutely hilarious.

Everyone is in Top (and Hilarious) Form

The film has more than a few returning faces from The Greasy Strangler, particularly Zach Cherry and Sam Dissanayake. While Cherry was the main character in The Greasy Strangler, he unfortunately doesn’t get much to do here — though he does have a shining moment where he shows Lula that he can do a body-popping breakdance move.

Sam Dissanayake has a much larger role this time. In The Greasy Strangler, he was one of the hapless victims of the titular serial killer who had a particular trouble of pronouncing the word ‘potato’. He uses similar line delivery here, he’s always screaming or gasping for breath. He’s a comic blast in every scene he’s in.

Aubrey Plaza shines as Lulu who brings about her natural comic timing but also some of her dramatic chops that was wonderfully exploited in Ingrid Goes West. If you’re fond of Craig Robinson’s voice, don’t expect much of it in this movie. Most of his verbal communication consists of groaning. Robinson, like always, delivers a perfectly timed comic performance, even though he barely says a word throughout the movie.

Emil Hirsch hasn’t acted in many comedies, but like his fellow cast members, he has quite a few moments of hilarity throughout the film. New Zealand celebrity Jermaine Clement delivers his naturally solid work as the kindhearted but deeply pathetic buffoon who aids Lula in her romantic journey. I’ve also always been a huge fan of Matt Berry, ever since his hilarious turn in The IT Crowd, and he didn’t disappoint here.

Besides the main cast, the supporting cast — even those who appear in a single scene — offer Hosking’s brand of humor. Everyone was in top form in this movie. It was a riot through and through and I was actually gutted when the movie was about to end.

Adjay (Sam Dissanayake) showing off his tight physique to Colin (Jermaine Clement) at the laundromat. Image via Websiteofeverything.

Beverly Luff Linn is filled with characters pursuing the romantic affections of someone who is actually in love with someone else. Lulu is chasing Beverly, despite the fact that he had left her years before, without a proper explanation. Colin meanwhile is chasing Lulu even though she’s obviously using him to get to Beverly. Rodney pines for Beverly, taking care of his every need despite that Beverly cannot give him what his heart desires. Shane meanwhile is chasing Lulu, even though it’s not entirely clear whether he truly loves her or just can’t stand the shame of being cuckolded.

Even though the film is mostly silly, this theme of unrequited love also gives the film a melancholic undertone. Deep down, all of these characters are actually quite sad. They are lost in their own romantic fantasies. All they want is for their romantic subject to fulfill their needs, and they are capable of demeaning themselves in every way if that’s what it takes. 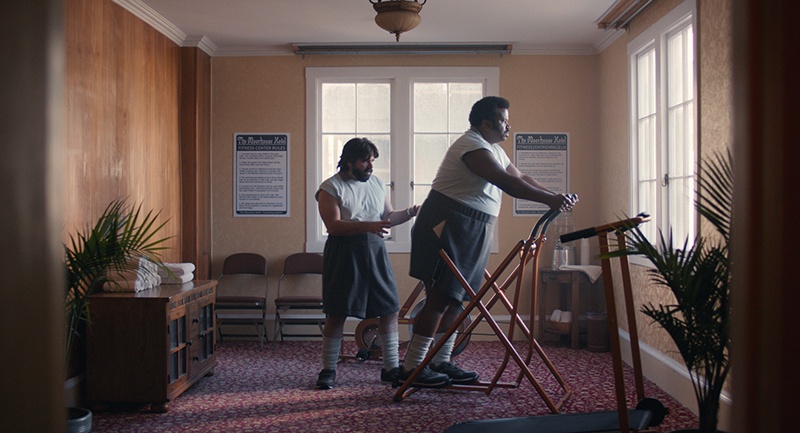 Craig Robinson working out with Matt Berry. I love this shot. Image via Fantastic fest.

Even though I enjoyed every minute of this movie, the ending did fail to give a properly satisfying conclusion to all the overlapping plot threads.

There are highlights in the climax. When we finally get a glimpse of Beverly Luff Linn’s mysterious show. (It’s unlike what you would ever expect). The eventual emotional revelation of Beverly to Lulu is also quite touching and painfully human.

But it does feel that other characters get the shaft, particularly Shane and Rodney. Their story arcs seemed to hint at a greater confrontation — perhaps culminating in a semi-violent act of desperation — but it all concludes in a whimper.

Even stranger, the film has a weirdly happy ending that doesn’t entirely jive with me. Perhaps Hosking wanted to diverge from the darkness he explored in The Greasy Strangler. Perhaps he began to care so much for the characters that he didn’t want their story to end in tragedy. The final two scenes are wonderfully acted and give the film some heart but it is rather underwhelming and a striking difference to the memorable and deliciously bizarre finale of The Greasy Strangler.

An Evening with Beverly Luff Linn is a more than solid follow-up to Jim Hosking’s incredible debut film. It’s a much more subdued film, lacking his infamous scatological shock-value, though it still seems to take place in the same weird world that Hosking introduced us to in the previous film. It might not reach immediate cult status like The Greasy Strangler but fans of his brand of humor should find much to enjoy here.

It’s main problem is that the ending fails to give a satisfying conclusion to some of its supporting cast. The film seemed to move towards a darker ending but it never happens. It’s not a cop-out but it doesn’t feel entirely genuine. Had the ending been as mad as its cast of characters, the film could have been up there with The Greasy Strangler.

Even so, it’s a riot from beginning to end. I can’t wait to see what Hosking will have for us next. Whatever it will be, I know it will be completely bonkers.

Thank you for reading! What are your thoughts on An Evening with Beverly Luff Linn? Comment down below!