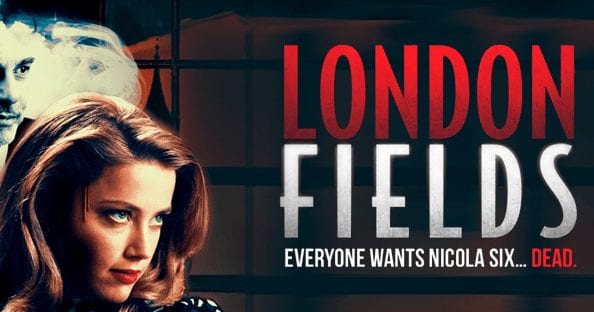 London Fields is based on the 1989 novel by Martin Amis and — after being shot in 2014 — has spent the past five years trying to get into theaters. With drama in front of and behind the camera it finally is out in the wild. But was it worth the wait?

The noir detective drama feels like it is from a different time, even if it has been only five years. The world has changed quite a lot in those five years, and after viewing the film it might have been best to keep it on the shelf.

In the near future, Samson Young (Thornton) heads to London, which is on the brink of collapse, for inspiration for his great novel. Finding inspiration in a group of characters that hang out at a pub near his flat, he starts to put his story together, but needs his muse.

Enter Nicola Six (Heard), a femme fatale with the ability to have premonitions of the future about the people around her. Using this information, she embarks on an affair with a number of men, one of which she knows will be her murderer.

I went into this movie knowing nothing. I’ve realized that marketing for films has the potential to really ruin a good movie before I even get in the door. So, I try to watch as little as possible and go into movies as clueless as possible. Afterwards when I started doing some research to write this article I realized why I was the only one in the theater.

London Fields has spent the last five years battling it out in the courtroom. It was originally in the Toronto Film Festival in 2015 but was pulled when the Director filed a lawsuit against the film’s producer’s for denying him final cut. They went back and forth with even the studio filing a second suit against the Director and Heard herself for unfinished work, which then prompted Heard to file a case against the studio for violating her nudity clause by using a body double.

Long story short, it was a mess, and after the dust settled, the studio pushed out this movie to 600 screens. There I found myself sitting in a theater all alone with no idea what I was getting myself into.

With flashes of fun in the setting, performances, and themes in this film, the unevenness of it all is what threw me off the most. It wasn’t until I discovered the post production issues did I realize what took away any potential this film had. A London that felt like it was constantly burning — literally, but no one seemed to care anymore — was an interesting choice of location. While flipping through the TV, there would be random emergency broadcasts that the characters would just complain about like it was a vague annoyance.

I was intrigued about what was happening there and in the rest of the world. The idea of where we were in place and time ended up being more distracting from the story. I wish a little more backstory would have been given to the timeline. What started as an alluring setting ended up as more of a distraction, as no satisfying explanation was given.

As a writer I can sympathize with the artist destroying himself for his lack of ability to get his creative words onto paper. Once Samson (Thornton) found his muse marked for death, he knew he had the makings of the perfect murder story. How many people have the opportunity to document a story right up to its devastating end?

Watching Samson follow these characters around like he was watching his novel unfold in front of his eyes was a captivating idea to me. Thornton did a great job of trying to be as impartial as possible without being pulled into Six’s story, even as he inevitably was pulled into her story later on.

I enjoyed Samson’s story arc and felt he was the most developed character in this film. I just wish Hollywood would realize no one ever wants to see Billy Bob Thornton looking for a romantic angle with anyone. It tends to be distracting. 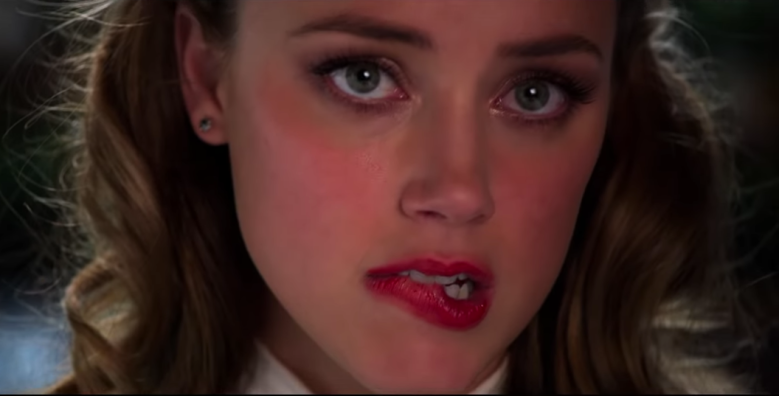 I have no idea who to blame for the direction of London Fields. With Director Matthew Cullen suing for not having final cut of the film, it makes it seem like all of this isn’t his fault, or at least he’s attempting to make that the case. With that said, what took me out of the movie the most were scenes that felt like I was watching a music video, which would pop up in the middle of this mystery story. So, when I did some detective work of my own and discovered that Cullen’s entire directing history is in music videos, everything started to make a little more sense in how this movie turned out the way it did.

Cullen had plenty of talent to work with but somehow had them stepping in and out of their roles so frequently it was hard to keep track of anyone’s motivations.

A perfect example is Theo James’ character Guy, a well-to-do gentleman who seemingly had everything anyone would want. With a large house, plenty of money, a gorgeous wife in Jaimie Alexander, they set him up as the character that should want nothing more. The only flaw in Guy’s otherwise perfect life is a small child that would have giant fits of rage, so bad that the orderlies would have been summoned from off screen to detain the child. No explanation was given into the child’s issues. Is that enough to have Guy fall deep into the London underworld and allow himself to succumb to the wiles of Nicola Six? Maybe for some, but I felt like I needed a little more reasoning as to why he was allowing himself to be so easily manipulated.

Predictably, this film played out like a music video with just flashes of coherent narrative. Not nearly enough to give justice to the complicated story that Cullen seemed to want to tell.

London Fields is based on the 1989 mystery thriller novel by Martin Amis. This movie played out very much like it was based on a book. I wasn’t surprised when I saw that in the credits after the film ended.

The story that was placed in front of me seemed like it needed a lot longer than the 2-hour run time to properly be told, only then would the character motivations be flushed out enough to be believable.

That’s not fun for anyone, especially when there’s no discernible deeper meaning.

With that said, I couldn’t help but feel icky watching her perform based on the needs and wants of these men in her life, one of which she knows will kill her. She is even told by Samson during the film that he is worried her character will be written off as simply a male fantasy and no one will take her seriously. That line right in the middle of movie made me think that was all she was there to be, and I felt it took a lot of power away from her as a woman and her performance.

This film was made 5 years ago, and a lot has changed in society and Hollywood in the way that women need to and should be represented in film. Nicola Six should have been a powerful, in-charge women, and even though she owned the men that she was manipulating, because she was succumbing to their fantasies to get what she wants almost felt like it took some of her power away. Hence, it felt icky to watch.

If London Fields had stayed more grounded it really could have been onto something. Instead the director’s desire to be different held his film back. Quirkiness has its place in story, but your characters’ motivations need to be clear as to why they are or aren’t doing what you would do in the same scenario. When your characters aren’t fleshed out you shouldn’t be taking up precious screen time watching a music video or a dance routine play out. This happens twice!

London Fields has moments where it could have been more. It has an intriguing story of a woman who knows when she will die and who will be responsible. However, within that intriguing story idea you must have characters that are worth following and a plot that doesn’t feel like it is being pulled through its story beats simply by necessity.

It seems as if this review will probably be the nicest you will find. With that said, even with a few fun moments and enjoyable performances it’s hard to recommend this film to anyone.

Thank you for reading! What are your thoughts on London Fields? Comment down below!

I worked as an Extra in London Fields, the guy in yellow shirt at the Marquis of Edendery darts match TV show scene sitting behind the cast at the table behind Amber, Theo and Billy Bob and standing next to Keith when he hits his girlfriend Trish near the end of the movie 🎥