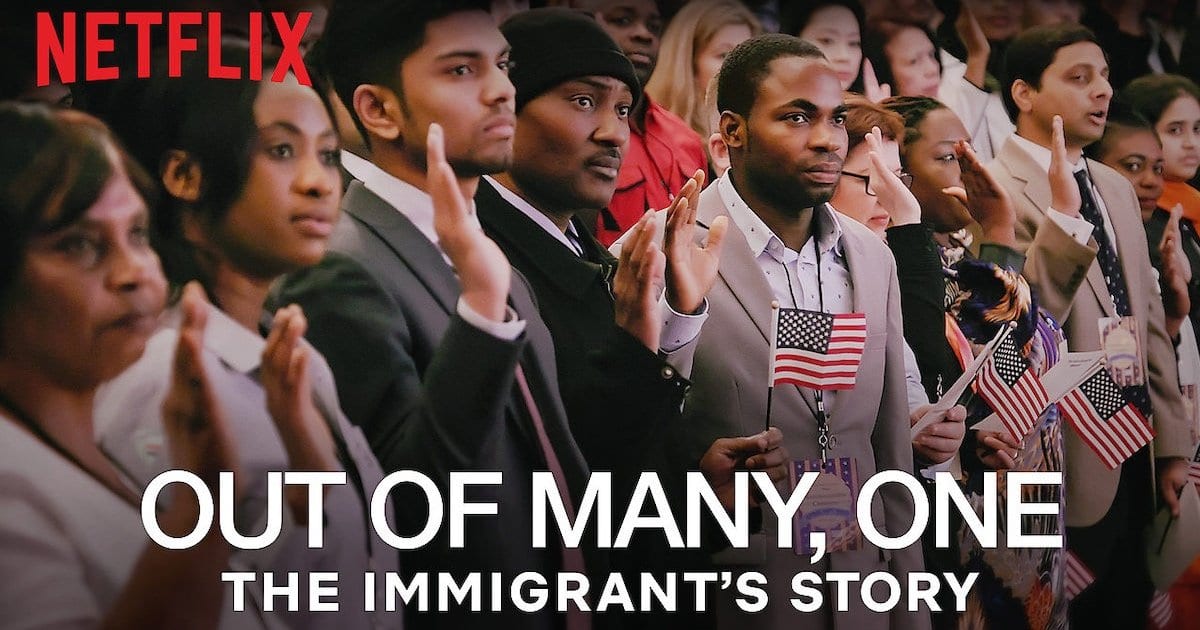 There are so many immigration documentaries out there that I questioned the need for another one. Yet today we also live in a more heated political climate than ever before. All Americans should know what connotations come with the term “immigration” since the 2016 election which has caused such a large portion of heated debates. With the current backdrop, I wondered how Out of Many, One would tackle these themes. Not to my surprise, it wasn’t all that impressive.

Out of Many, One is a 34-minute look at the process of American immigration. It shows the perspectives of the awaiting immigrants along with their motivations, backgrounds, and stories. That’s as complex as it gets.

So Netflix releases another one of their documentaries; another one that tackles a hot button topic in society. I was certain the film would make a lot of references to today’s controversies, and it would have the need to oversaturate us with nothing but their ideal vision of the right message. I didn’t expect a lot when it came to subtlety as we know Hollywood loves to tell us what’s right and what’s wrong from time to time. My expectations were set low and I’ll gladly admit it passed them. Having said this, crossing a low bar doesn’t mean it stands above much else.

One of the things I’ve come to appreciate about the movie was its insightful perspective into the process of becoming a U.S. citizen. We get to see the potential immigrants attend special courses and places such as museums to help them learn the basic knowledge of the country’s history and culture. Though that may sound a bit boring, but you’d be surprised to find out they find a way to make all these items accessible.

Another major plus was focusing on the people themselves. Aside from the factual side of things, this adds some perspective. Basically, the viewer is treated to a group of emigrants who each tell about their backgrounds, motivations, experiences or preexisting connections with America.

It adds an extra layer, something more to bite into other than just the historical facts, for those alone would get old quickly. It exposes the viewer to some of the harsher foreign countries where freedom of speech is censored and prosecuted. At first glance, it feels like an attempt to snatch the viewer’s sympathy, and although that’s true to some effect, it allows for a moment of reflection to think about how thankful all Americans should be to live in such a country.

I’m not a fan of forced political opinions that try to show off inclusivity for the sole reason of trumpeting. The movie, for the most part, stays away from that with an exception to a couple of instances. However, there are a few occasions when Out of Many, One manages to creep in one-sided opinions.

It’s not a major dealbreaker, but there’s a major missed opportunity here. This should have been the chance to bring two or more sides into the spotlight and create room for conversations that are free of oblivious bias. There should be more perspectives included than just the ones of the immigrants since they’re not the only ones this arrangement will affect. It’s fairer than conceding to one possibility as if the other voice does not exist and has no face value.

By the end of the day, the lack of these ideas does in fact damage the movie. Like I said, if the documentaries try to serve their purpose by attempting to show an objective look, then that’s perfectly acceptable. Leaving out any important sides of the story, however, reaffirms its bareness and, as a result, Out of Many, One comes off as if it’s trying to sneak something by the audience.

There’s nothing left to say about Out of Many, One because there’s nothing more to it. It simply does its job without going in-depth into any of its elements. That’s not to call the movie bad or rushed, however. I for one am grateful for its existence; I would rather have a 34-minute film that does something right than a 90-minute one polluted with dominating political fluff.

If you don’t know much already about the U.S. immigration process then you can learn a lot from this film. But if you’re looking for something deeper or if the subject is already too familiar to you I suggest looking elsewhere. You won’t find much beyond the basics.

Thank you for reading! What are you thoughts on Out of Many, One? Comment down below!

Thanks for your review. The film sounds like a real missed opportunity in not providing other perspectives on the immigrant experience.