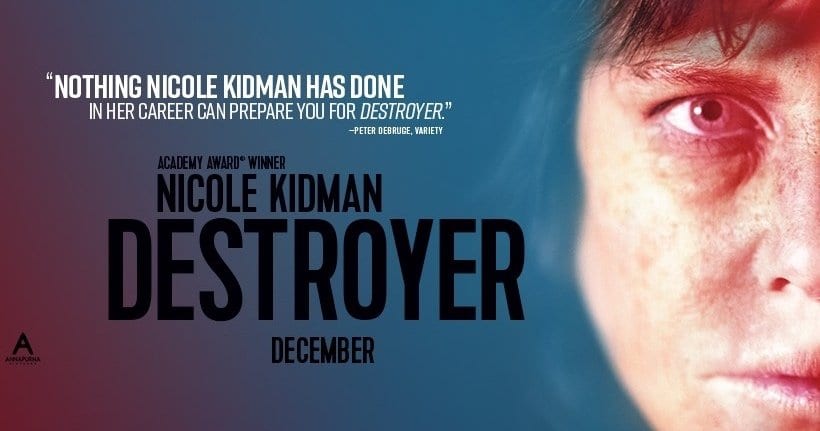 There’s always a few movies at the end of the year that are hoping for awards but ultimately get swallowed up by the sheer volume of films with similar aspirations. The awards season is often a crapshoot with luck being the biggest factor in a successful campaign. For the 2018 Oscar race, it appears that Destroyer will get the short end of the stick in most categories, but there’s no doubting that it deserves your attention.

As a young cop, LAPD detective Erin Bell (Kidman) was placed undercover in a gang along with her partner Chris (Stan). But after the assignment left her irreparably damaged, Bell has grown to become a closed-off soul, one that is hardened all the way to her core.

Years later, local authorities uncover a body with ties to the leader of the gang (Kebbell) that Erin infiltrated all those years ago, forcing Erin to come face to face with her demons and the individuals that caused them.

Karyn Kusama is Better than Ever

After the critically-lauded Girlfight, Karyn Kusama jumped into the world of blockbuster filmmaking with Æon Flux. But as you may or may not already know, Æon Flux is one of the more notable flops since 2000. Production of the film was a bit of nightmare for everyone involved — Charlize Theron later noted that she was almost paralyzed from a failed stunt — but Kusama left the project particularly wounded. Almost immediately, the director claimed that, after finishing principal photography, Paramount took the film away from her and heavily re-edited it, noting that the studio felt that it was too much of an art movie for financial viability.

Kusama has directed a few films since — including the criminally underrated Jennifer’s Body and the devilishly good The Invitation — but she has stayed away from blockbuster filmmaking altogether which is quite a shame considering her immense talent. Thankfully, Kusama has noted that she feels as if she’s in a good place now; she has figured out how she wants to make and create films from here on out with an emphasis on artistic freedom. (I can’t imagine why that would be the case!) With how wonderfully she’s performed in recent years as a director of TV and film, maybe Æon Flux was a blessing in disguise.

Everyone is talking about Nicole Kidman’s transformation into a completely broken figure, one that stripped her of her looks and charm. A lot of makeup transformations by beautiful actors and actresses in an attempt to appear ugly or down to Earth are a bit hollow for my liking. Many of them feel like impressions and the makeup is often the opposite of realistic. Nicole Kidman in Destroyer, however, is one of the few instances where the transformation feels worthwhile.

Destroyer splits time between Kidman as a younger cop as her character initially infiltrates a gang in the past and when she’s a broken, hard-boiled detective in the present. The use of prosthetics and makeup accents the change and the character’s inability to move on, to create a new life for herself. The real MVPs are the members of Destroyer‘s makeup crew for making Kidman believable as both a young woman and a grizzled vet. Kidman is one of the more distinctive and glamorous-looking actresses we currently have, and she completely disappears into someone (or something) who is her absolute antithesis. Destroyer probably wouldn’t have worked without their skill.

I hate to jump to conclusions, but this may in fact be Kidman’s best performance (and the best performance of 2018). The physical changes are obvious, but she also has a different sense of physicality, one that changes as the film switches between her younger and older self. Kidman has a tendency to fall back on her native Australian accent on certain words in her performances, but she even manages to clean up that issue for Destroyer. She’s the embodiment of a deadly mistake that lingered for far too long. I was mesmerized by every single choice that Kidman made as an actress. 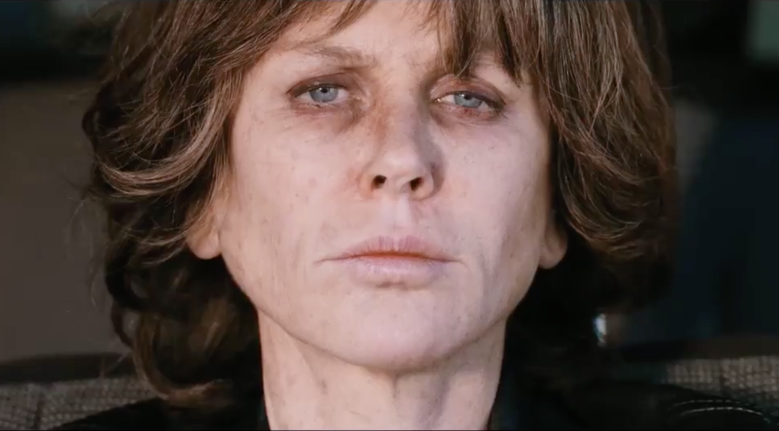 The REAL MVP here is the makeup team! image via IndieWire

Destroyer is a bit of a tough hang, but certainly a worthy one. As Kidman limps across the screen — or suddenly finds the strength to beat someone silly — we sink deeper into a grimy world that is unrelenting in its vision. Aside from a few moments of humor — Bradley Whitford comes out swinging in his impactful scene — Destroyer surrounds you in a blanket of heavy harshness. However, the film isn’t the typical Hollywood version of dour; people aren’t drinking, smoking, and bleeding all over the place with no rhyme or reason in a fit of empty style. All of those elements are in Destroyer — this is a crime thriller, after all — but they’re all pushed to the background. Instead, Destroyer focuses on feeling and atmosphere to get the job done. The score does a lot of the work in Destroyer to set the mood in that respect. It often mixes ambient sounds with sliding strings, hinting at the mental state of Kidman’s character with unsettling stings of music.

Though when many hear the term “atmosphere” thrown around for a movie, they immediately bristle, knowing for them that an atmospheric movie may become hoity toity and boring in their eyes. But in the case of Destroyer, I think there’s plenty of visceral, tangible pieces to avoid that negative distinction. 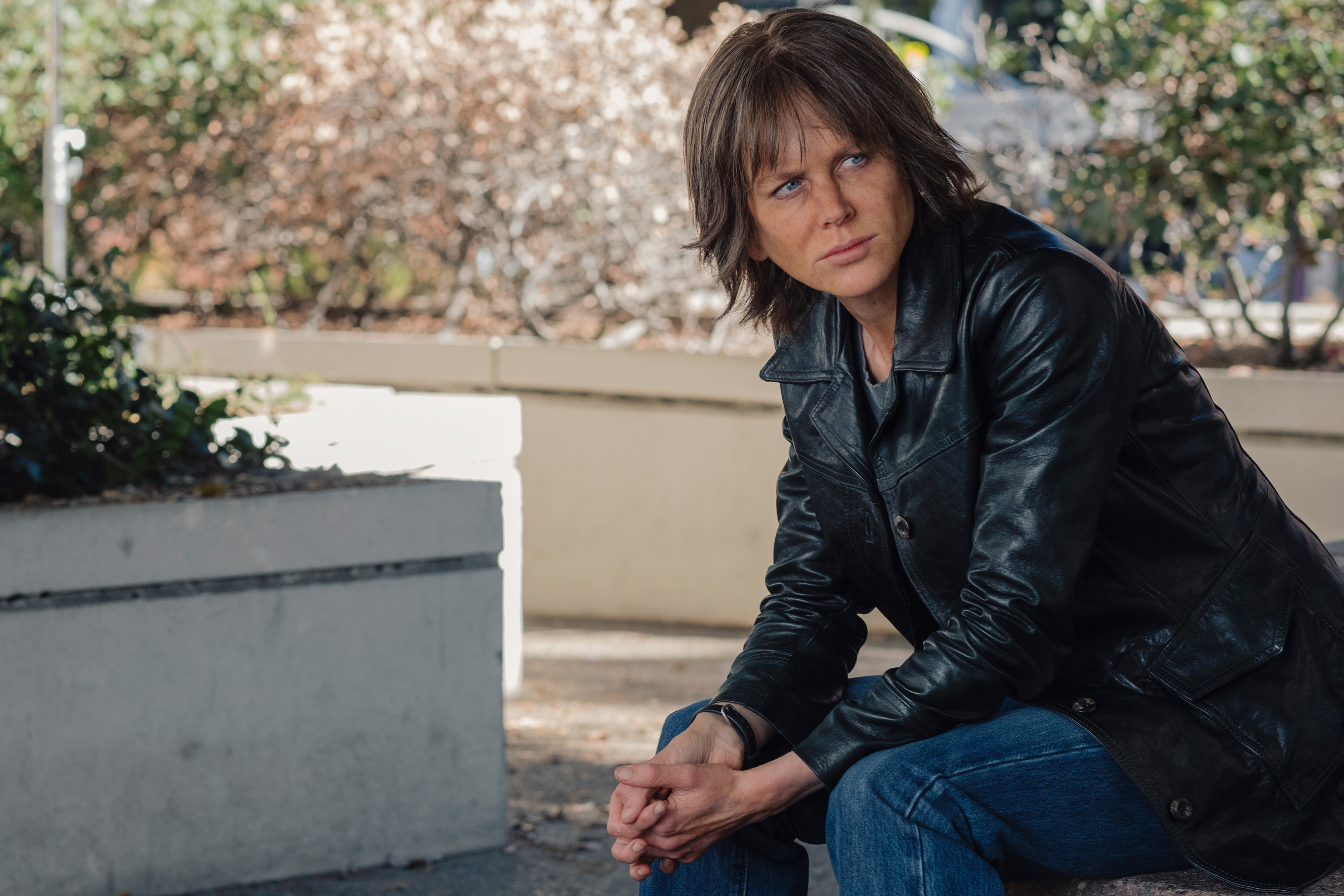 What’s going to make or break Destroyer for a lot of people is its narrative choices. Destroyer likes to jump from moment to moment and time to time without much warning, and it can get a bit dizzying. Not to mention that some of these beats aren’t exactly executed perfectly, especially a side plot between Kidman’s character and her daughter which I found a bit disposable. Many viewers might find Destroyer a bit impenetrable as a result.

Personally, while a bit dizzied myself, I found the multiple framing devices and timelines thoroughly intriguing. You slowly learn why Erin Bell is so closed off from everyone around her as she attempts to tackle her demons until everything comes to a head. However, I’m most fascinated with the theories that this narrative creates. There’s a good case to make for one theory in particular which helps transcend Destroyer past what would have been a rather simple and straightforward crime story.

The adjective “gritty” gets thrown around far too often when describing darker films, leaving every piece of harrowing art described the exact same way. Yet Destroyer is unquestionably gritty in how it presents itself. Its meditative, dark nature sucks you in to a different perspective of Los Angeles. As far as L.A. movies go, Destroyer is certainly in the upper echelon.

However, the focus is on Nicole Kidman — for good reason — as a stupendously distant entity that has more in common with a corpse that a living, breathing member of society. Kusama’s use of this character is endlessly fascinating, so much so that Destroyer warrants multiple viewings for further study.

Thank you for reading! What are your thoughts on Destroyer? Comment down below!