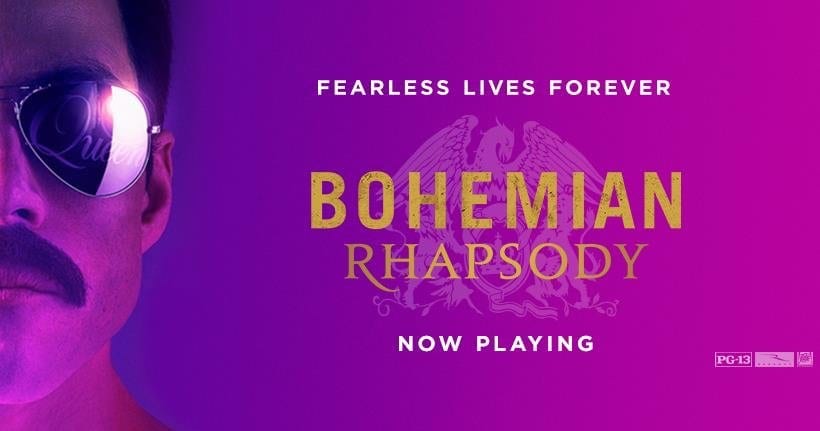 Bohemian Rhapsody was bound to rake in the dough by attempting to tackle Freddie Mercury and Queen’s dazzling rise to superstardom. The film’s box office results thus far have proved that assumption to be correct. But as we all know, movies are more than a few tunes and impressions of popular figures. Bohemian Rhapsody struggles mightily with this notion.

Bohemian Rhapsody is a foot-stomping celebration of Queen, their music and their extraordinary lead singer Freddie Mercury. Freddie defied stereotypes and shattered convention to become one of the most beloved entertainers on the planet. The film traces the meteoric rise of the band through their iconic songs and revolutionary sound.

I am a huge fan of Rami Malek. We all know him from Mr. Robot, the TV show created by Sam Esmail on a hacker who wants to change the world. His acting on the show has been unparalleled, culminating in his Emmy win in 2016 for his role as Elliot Alderson. I was psyched to learn of his role in Bohemian Rhapsody when it was first announced, and knew I would be giving him my full support. True to my word, I saw Bohemian Rhapsody opening weekend.

Rami is truly a gifted actor, as if there was any doubt. I’ve only seen him as the awkward Elliot before, yet he performed as a completely different character with Freddie Mercury. He was in turn gregarious and self-conscious, tender and prickly, assertive and troubled. It must’ve taken much skill to portray Freddie Mercury, a man who presented himself in as grand a way as possible, while still being deeply vulnerable. Rami nailed it.

The highlight of this movie was definitely the music. The rendition of the song ‘Bohemian Rhapsody’ was my favorite bit of the film. I was particularly enthralled by the creative process behind the song ‘Bohemian Rhapsody,’ as we could visually appreciate how the different elements of the song were mixed together. It was a wild ride, and truly entertaining. The music threaded together as they were creating the final product gave me goosebumps!

Honestly, I wasn’t quite sure what I was expecting when it came to this film and its portrayal of Freddie Mercury’s bisexuality. But I know it wasn’t total erasure. Mercury’s sexuality was not well fleshed out, and reduced to simply being straight, then gay, as though bisexuality doesn’t exist.

The plot did not really captivate me. The storyline was simply bland. We simply hop from stage to stage in Freddie’s career, with a sudden drop to his illness at the very end. It did not seem to have much meaning outside of Freddie’s increasing instability and then gradual return to his “home”, be that his band or his family. There was not much of a character study of the great musician that is Mercury, nor is there even a true story of Freddie’s exploration of his sexuality, a key part of his life. 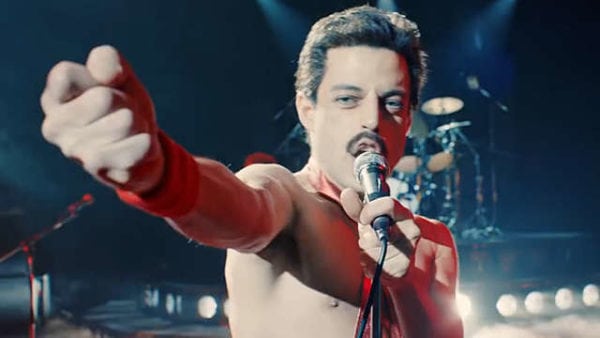 The biggest flaw in this film lies in the emotional heart of the film being Freddie Mercury’s relationship with Mary Austin. The film worked best when it focused on the family bond in Queen between Freddie and his band members, and the most delightful aspect of their bond was the ensuing banter. The film did Queen a disservice by playing up Mercury’s relationship with Mary Austin at their expense. The back and forths between the band over creative decisions, still sewn together with love and togetherness, were among the highlights of the movie.

Bryan Singer’s directing was underwhelming. It was too shaky, too jarring, used too many jump cuts. At a point, I couldn’t even take the movie seriously. As well as that, there were clichés upon clichés littering the script, especially in the first act underscoring Queen’s rise to fame and Freddie Mercury’s romantic entanglement with Mary Austin.

For what it’s worth, this movie had achingly beautiful shots that sent shivers through my veins. The opening extended shot was simply superb, of Freddie gearing up to jump onto one of the biggest stages of his career. From the back, Rami’s Freddie looked sublime, divine, ethereal, in a shroud of glowing support.

The visuals were particularly strong when we moved through the landscapes Freddie traversed, especially in the open countryside where the band produced some music.

The most salient part of the movie, in my opinion, was actually the style I got to admire from Freddie. Rami’s Freddie was cloaked in adventurous outfits from the beginning, and Rami pulled off every look. Each jacket he wore seemed specially tailored to him, and he was both suave and risqué in his style choices, as the real life Freddie Krueger was.

This movie is certainly entertaining, and the music is lively and captivating. However, when you scratch away at the surface, and take out all the glitz and the glam, the movie simply does not have a beating heart.

I truly wish I could say that I loved this movie; that it blew me away. Actually, it was lackluster at best. It didn’t leave any lingering feelings in me, it didn’t particularly move me, it didn’t even truly enchant me. The only parts that stood out to me in the whole production were Rami’s acting and the music. The theme of connection was weak, the plot was uninteresting, the directing left much to be desired, and the film’s treatment of Freddie Mercury’s sexuality was confusing.

Thank you for reading! What are your thoughts on Bohemian Rhapsody? Comment down below!

[…] thought of this saying every single time Rami Malek was on screen during John Lee Hancock’s new feature The Little Things, because if you don’t […]

[…] where a more traditional score wouldn’t do the trick. Sigel, the Director of Photography for Bohemian Rhapsody, does a masterful job of capturing the beauty of the Vietnam countryside, while also showing the […]

I thought the movie was great

I loved this movie. But I just wish they would have been more accurate on his real life.

You have followed my blog for a long time (which I highly appreciate) and after looking at your blog I’m a total fan. And that is why I have nominated you for the Versatile Blogger Award. You can find the rules needed to obtain it here: https://annlyelonline.com/2018/11/12/ive-been-nominated-for-the-versatile-blogger-award/

Not expecting much but I’ll go anyway if just for the music.

I loved this movie, saw it three times, but I’m not a Queen fan and don’t know much of Freddie’s real life.
I have to agree though, it would have been better to concentrate on his connection to his band members more. I thought the emphasis on Mary a little odd.

This is why I went to see it in previews, before I could be tainted by other’s opinions.

For the record, I loved it. Seen it twice, plan to go again (and I never do that), will definitely buy the BluRay when available. I’m a huge Queen fan, so I know this movie isn’t the real story. But it’s a very entertaining take on it. Rami Malek is amazing in the role. And all the musical scenes are fantastic.

Agreed. I’m so glad I saw it before I heard people whining about it.
And yes, Rami was amazing as Freddie.
Because of this movie Queen is reaching a whole new group of fans… how is that a bad thing?