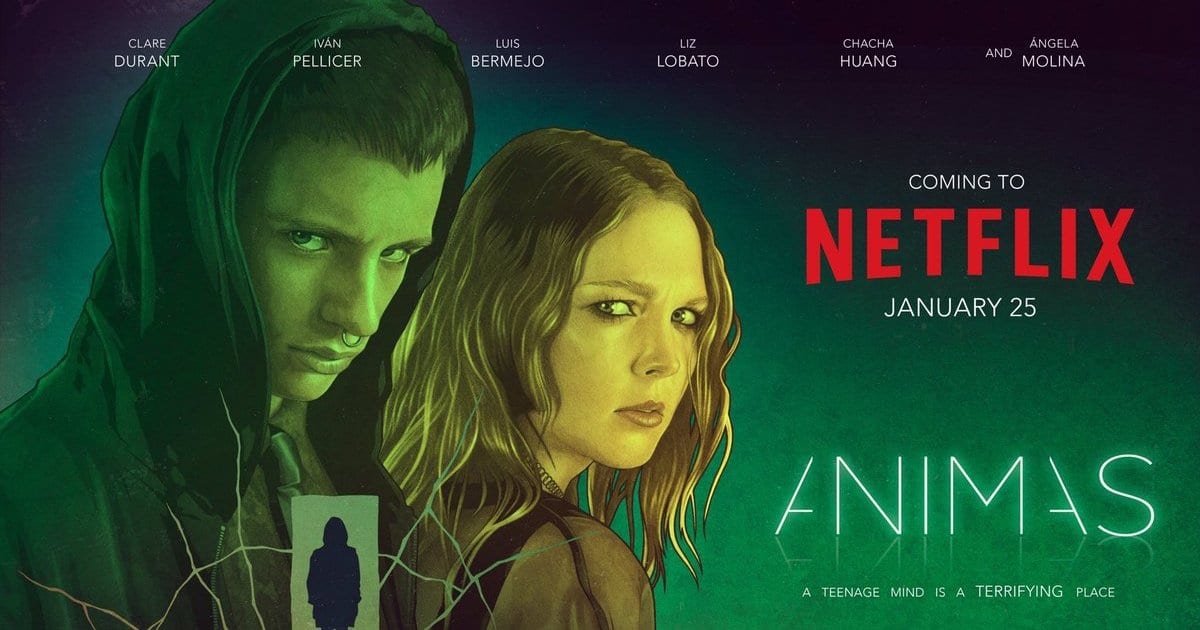 Some of the most effective horror films ever made deal in the corruption, subversion and perversion of the happy family unit. The Shining, Poltergeist, Get Out — movies such as these take the sacred image of family, shatter it into a million pieces, and gaze at it as if through a funhouse mirror. It’s that touch of the personal that makes the horrific images onscreen come to terrifying life for the audience.

This might explain why Ánimas, a Spanish thriller from last year newly released as a Netflix original, has such a devastating effect. From this tale of abuse and broken homes, filmmakers Laura Alvea and José Ortuño conjure a wealth of truly upsetting imagery and grim suspense, all leading up to a shocking, mind-blowing climax.

Ánimas follows Álex (Clare) and Bram (Pellicer), two recent high school graduates and close friends since childhood. Each of them acts as a support system for the other in the face of their difficult home lives — Bram’s father (Bermejo) is abusive towards Bram and his mother (Lobato), and Álex grew up never really knowing her father. When Bram starts dating classmate Anchi (Huang), he and Álex start to grow distant, and Álex begins experiencing nightmarish visions of increasing intensity. Eventually, she finds herself unable to distinguish between fantasy and reality.

The Ghosts of a Broken Home

The film does an excellent job of portraying how years of abuse can slowly and painfully wear away its victims. Some of the strongest examples of this are the various glimpses we receive into the hellish daily life of Bram’s mother Laura.

We watch her rise from bed after another sleepless night and arrange her kitchen as immaculately as possible. She spends hours on end standing still, staring at nothing, her eyes blank. An upbeat song plays on the radio as the kitchen clock coldly, maddeningly ticks away the passing minutes. Living so long with her unpredictable, outburst-prone husband has transformed Laura into a living specter.

As she and Bram drift further apart, Álex’s sense of ghost-like numbness deepens. She often can feel nothing, leading her to resort to drastic measures in order to feel anything — be it cutting herself with a razor blade or standing under a blisteringly hot shower. (Those averse to depictions of self-harm should take extreme caution going into this one.)

Álex’s home life seems to contribute to this numbness as well. She mentions that she only has “bits and pieces” of her late father. Her mother, though occasionally heard speaking, is basically a non-entity in her life. Thus, losing Bram — the only real friend she has in the world — results in a bitter, gnawing isolation that intensifies her ghostly hallucinations.

Bram, too, appears numbed by his abusive family situation. Quiet and reserved, dead to the world, he prefers to absorb himself within his favorite horror movies than interact with his surroundings. He has constructed a wall around his soul to keep himself from getting hurt — a barrier that only Anchi and Bram’s therapist Dr. Berger (Molina) seem able to penetrate.

What Ánimas lacks in comprehensibility, it more than makes up for in aesthetic beauty. Alvea and Ortuño saturate every frame of the film with dazzling color, placing particular focus on red (anger) and green (melancholy). These vivid images magnify the claustrophobia and creeping terror of the film itself. It’s like a more intense version of a Guillermo del Toro movie — or a much less intense version of a Gaspar Noé movie.

The film is certainly guilty of the occasional formulaic jump scare or stereotypical “scary” soundtrack cue. However, it does take excellent advantage of long takes and moments of silence. For instance, one scene involves Álex stepping out of her shower after experiencing one of her visions. The camera slowly pans away from a terrified Álex, across the room, and then back across the room to Álex. The entire time, nothing can be heard except white noise, and though nothing actually happens, the scene effectively ratchets up the tension to a palpable degree.

Ultimately, Ánimas does a better job of establishing mood than telling a coherent story. Still, the result is never less than fascinating. It’s a gripping tale of how our personal traumas impact us as people and the devastating effect they can often have on our psyches.

Thank you for reading! What are your thoughts on Ánimas? Comment down below!

A horror film that’s better at atmosphere than plot? Sounds like my kinda film!