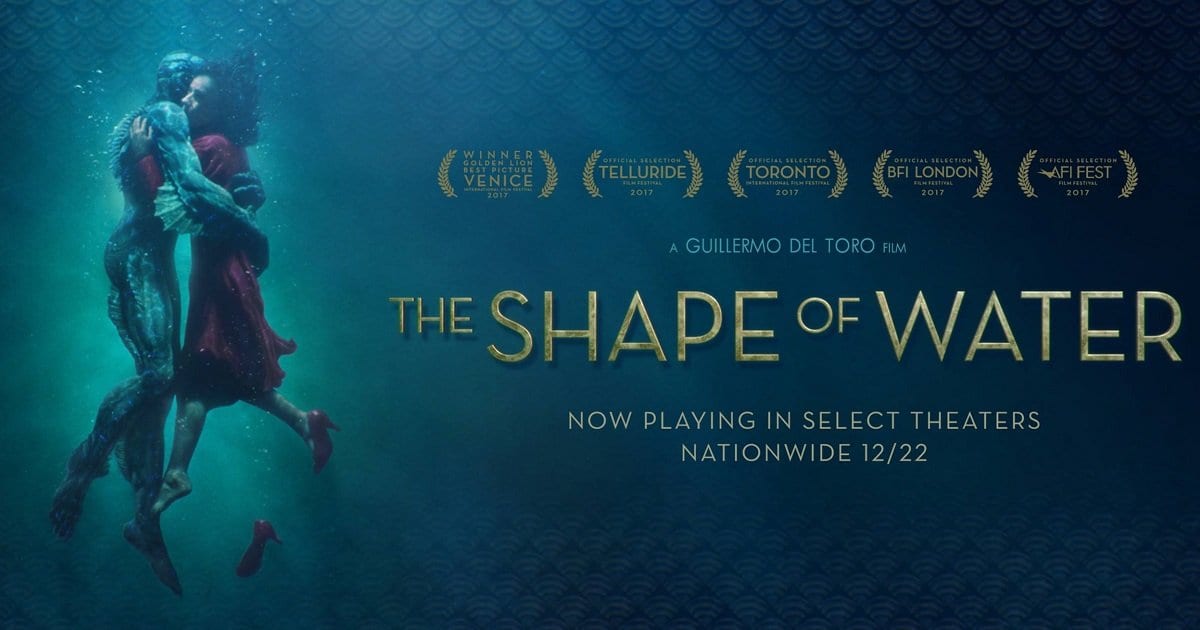 More Oscar hopefuls continue to expand out into theaters around the country, bringing weird, awkward, and different stories that are rarely (if ever) seen on screen.  Guillermo Del Toro’s The Shape of Water most identifies with this notion, offering a story that is told in a way unlike what we’ve seen before.  The following review will be spoiler free. 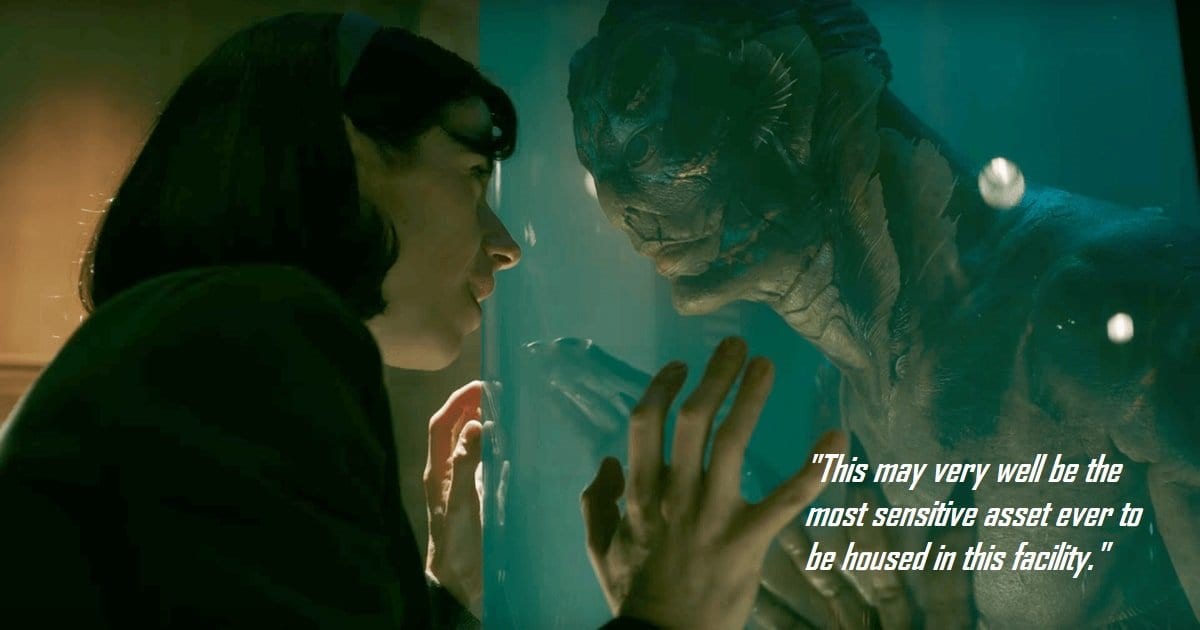 Lonely Elisa (Hawkins) is a mute woman that works for a government laboratory where she and Zelda (Spencer) clean up the facility and make lives easier for the employees working there.  However, one day, a new asset arrives at the laboratory: a mysterious water monster of unknown origin (Jones).  Elisa begins to develop a relationship with the monster that turns romantic.  But, government officials led by Strickland (Shannon) want to dissect the creature to learn about it, leaving Elisa and others to act quickly to save it while other forces also look to seek out their own agendas.

Guillermo Del Toro has received considerable credibility from genre enthusiasts over time, and for good reason.  While he loves these large, epic tales, he performs best in faux fairytales that blend usual and eccentric elements.  He enjoys haunting oddities that speak mightily to those that prefer wacky and wild films.

In fact, there’s another version of Hollywood in a parallel universe where Guillermo Del Toro practically owns the industry.  Those that know him enjoy his version of Hellboy, but he almost had two other huge projects in his arsenal that would have made him a huge star.  Del Toro was originally supposed to direct The Hobbit trilogy, but, he unfortunately had to leave the project due to MGM’s extended financial troubles that had delayed the production and interfered with his other works.

And yet, Guillermo Del Toro himself claims that his biggest regret is not becoming the head voice behind Universal’s Dark Universe which became a disaster after The Mummy was unceremoniously panned by fans and critics.

But, Del Toro continues to move on, creating stories that align with his odd touches.  He’s gone as far as saying that The Shape of Water is one of his most beloved stories yet, showing that he still continues to push boundaries.

Guillermo Del Toro is the Star of The Shape of Water

When Del Toro’s heart is in a project, it oozes off the screen.  The Shape of Water is clearly a labor of love, becoming a story that is oddly enchanting.  A love story between a mute woman and a water monster is a premise that could easily become the center of a lot jokes.  Something that’s that implausible could easily be written off by those that are looking for a more “serious” movie experience.  But, Del Toro breaths life into this story, creating bonds that shockingly work.  Neither Elisa or the monster have anyone else, making their relationship feel quite organic.

Obviously, there’s some fantastical elements to The Shape of Water.  To combat these feelings, Del Toro adds an oddly quirky style in combination with a Lady-and-the-Tramp-like score that infuses some extra whimsy.  The Shape of Water bends reality without ever becoming unrealistic, creating a weird dichotomy that is always engrossing.  Del Toro takes chances with expressing characters’ feelings and inner thoughts, making a mute woman and water monster (characters that never speaks) always fascinating.

Surprisingly Timely Themes That Blend Organically into the Story

With that strange energy comes very relatable themes that are more timely than ever.  In essence, the relationship between Elisa and the water monster is a metaphor for forbidden love.  The juxtaposition of this idea with the wholesome image of the 1960’s creates some quasi-hysteria that forces this relationship and the mannerisms of other characters to remain hidden.  This point can seem obvious, but Del Toro never makes it his agenda to force the idea that any love is true love.  Rather, the story merely makes this idea apparent via solid storytelling.  Richard Jenkins supplys a lovely supporting performance that adds to this concept as well.

The best movies that act as cultural statements contains stories that focus on character and well-crafted stories.  You begin to side with The Shape of Water‘s core beliefs because you come to love the characters.  Sally Hawkins expresses so much love and grief as a mute woman that you ultimately align with her plight and that of others as well.  The Shape of Water is truly beautiful in that regard.

image via the Daily Dot

Its Signature Style May Get in the Way at Times

With all its enchanting glory, The Shape of Water isn’t without flaws.  Del Toro adds a Cold War element to the story since it takes place within the 1960’s.  It seems perfectly reasonable to have this piece of of the puzzle considering that the water monster is a sensitive asset that many governing bodies would like to get their hands on during this era.  However, there isn’t ever a payoff to this component that makes it worthwhile or adds to the plot.  Certain characters could have been written differently to disregard it altogether but still act accordingly to their personal ideology in the same way and The Shape of Water would have had a tighter narrative.

The Cold War creates a fascinating backdrop for the story.  But, you might come away wishing that it had as much tender love as the central relationship. 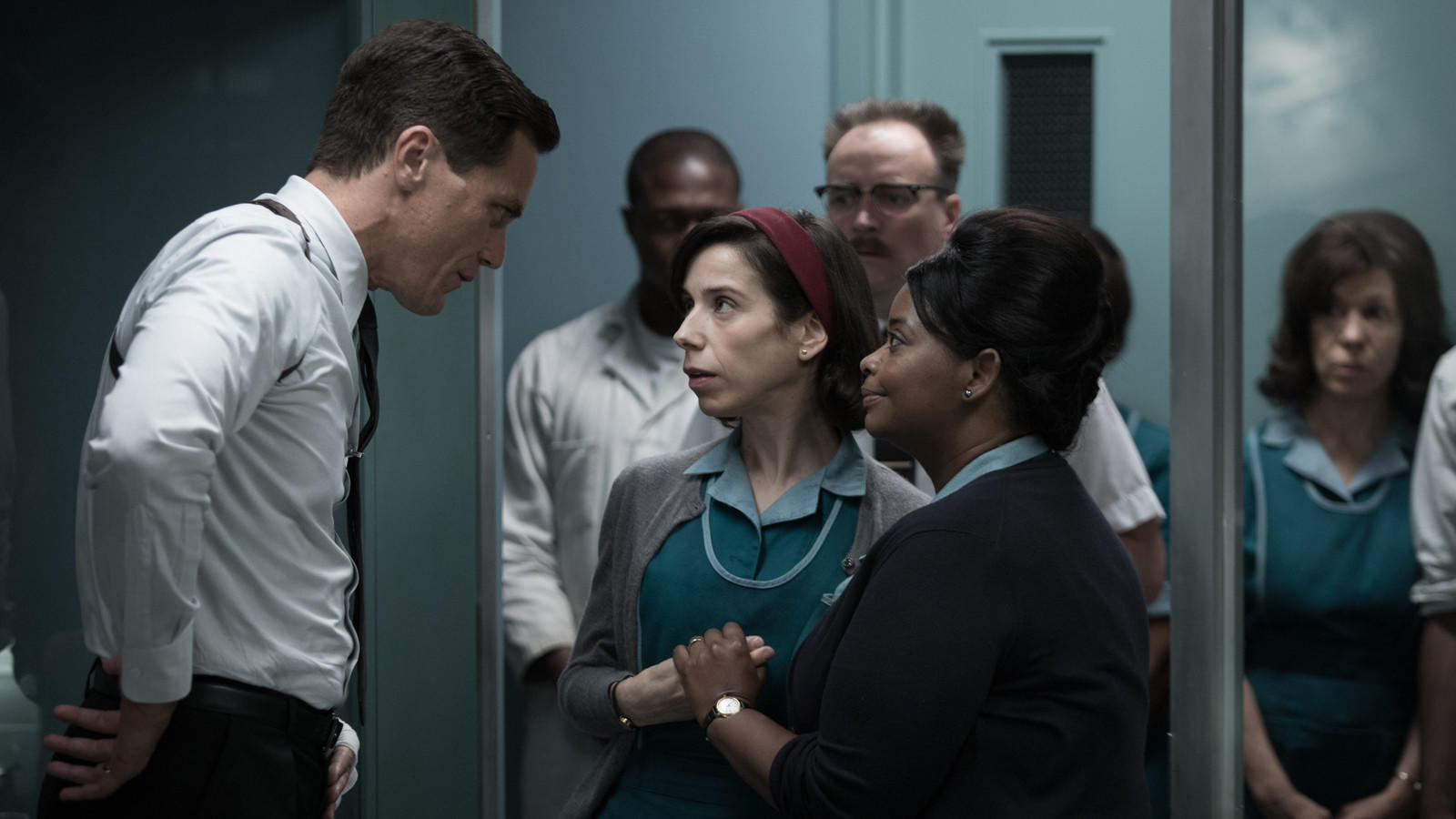 The Shape of Water is bizarre, weird, enchanting, and lovely, creating a cinematic experience that is unlike what you’ve seen before.  You’ve seen this story before in other films, but you haven’t seen it told quite like this.  This film is strangely endearing, creating a beautiful relationship out of a premise that may seem laughable at first.  It has its issues, but its certainly worthy of the praise it has received from early screenings.  It gets an A-.

With its creative structure and timely messages, The Shape of Water is sure to become an Oscar contender in the coming months. Thanks for reading!  What are your thoughts on The Shape of Water?  Comment down below!

[…] We receive a glimpse of the lives of two fast-food workers. There’s the aging Stanley (Richard Jenkins), who’s ending his thirty-year career in the service industry to take care of his ailing […]

[…] happens when you mix threads of The Shape of Water with economic European storytelling and pervasive sadness? You probably get something like […]

Great review and I’m glad you liked it so much. But for me this is the most over-hyped movie of 2017. Words like entertaining, charming, and whimsical come to mind; the label ‘masterpiece’ is simply not deserved. To compare this to Pans Labrynth debases a true masterpiece; it is not in the same league.

I definitely think calling this one a “masterpiece” is entirely too much praise as well.

I saw the film before all of the hype surrounding it began to swell, so I went in without any serious expectations. I think this might be one of those circumstances where a well-known director finally creates a film that has a chance at an Oscar so everyone goes nuts about it to push it over the top. Totally agree with you on the Pan’s Labyrinth comparison!

You summed it up perfectly! “The Shape of Water is bizarre, weird, enchanting, and lovely, creating a cinematic experience that is unlike what you’ve seen before.” Bravo!

It truly is! One of the most unique films of the year!

Definitively The Shape of Water is on my list of movies to watch!

I definitely urge you to seek it out!!

This sounds like a movie I want to see. Loved Hellboy series. I met Doug Jones years ago at a Christian music and arts festival called Cornerstone. He came and spoke at showings of Hellboy and was just this awesome, energetic artist who loved getting into these characters.

You can tell that he’s really enjoying himself as the water monster in this one! The way he moves and reacts to things is so oddly charming that it’s obvious that he wanted the best for the character and the film!

I remember Jones mentioning that the reason he would get picked for these roles was partly because he was in such good physical condition and so flexible (he actually did a standing stretch pulling his right leg till it touched his ear!). That combined with his patience while getting hours upon hours of makeup applied was a big asset to him.

Absolutely! You see actors get progressively more bitter about sitting in makeup (Jennifer Lawrence in X-Men comes to mind) that movies continue to switch towards CGI effects. One of the best things about The Shape of Water is that the creature feels so real from the practical effects, making the relationship feel legitimate

It sounds amazing, like a new take on the typical subject of a 60s B horror movie. Del Toro’s movies can be kind of intense. Does this get very scary or bloody?

It’s not scary but there are moments of blood. It’s more of an odd fairytale with a whimsical feel to be perfectly honest!

This keeps sounding better and better!

The story and romance seem so interesting, but the R rating turns me off a bit as I don’t usually watch R-rated movies. How bad of an “R” is this film, would you say?

I really want to see this! Unfortunately its not playing anywhere near me. Hopefully it’ll get a wider release and I get to see it soon!

I was lucky and saw it due to a fathom event near me, although i still had to drive a decent amount ?

Wow, this is really high praise indeed! ? I love most of Del Toro’s movies and this is one that I have been looking forward to since seeing the trailer for it. And an A- is certainly a great score. Really can’t wait to see this one ? Great post!

You can really tell that he loves this story. It’s so charming and lovely that you can’t help but like it yourself!