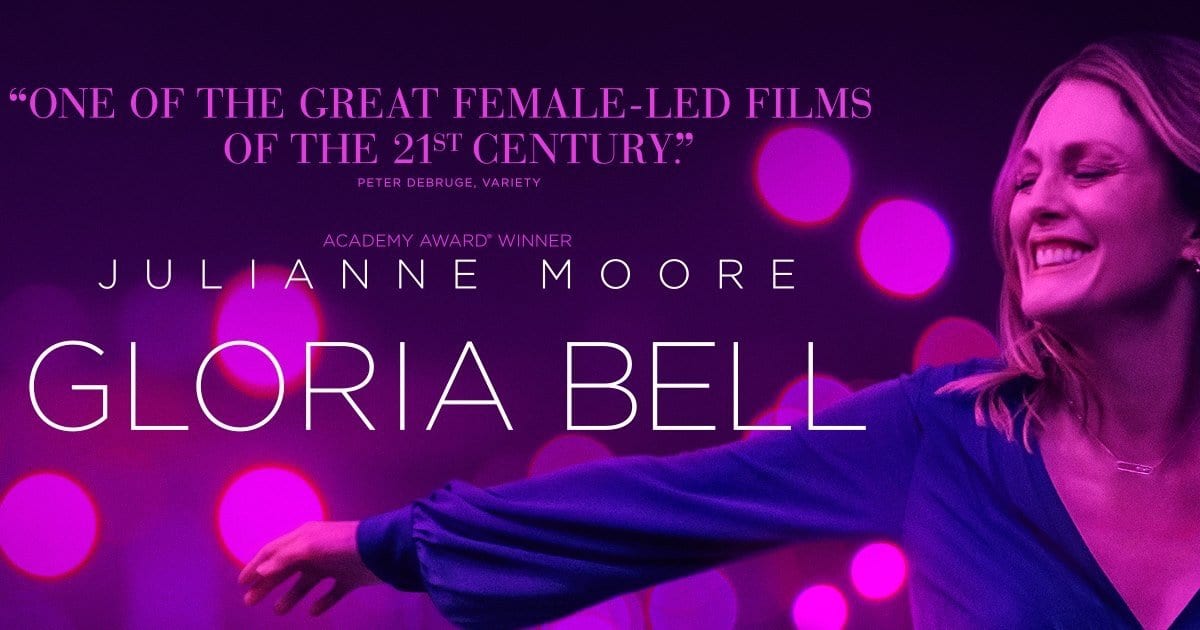 Dating is so, so tough. Showing vulnerability in the face of possible rejection is one of the more harrowing experience the common single person can encounter. Now add to the mix that the single person is in his or her late 50’s, and the perception is that time is quickly running out on a creating love and you have Gloria Bell, the latest film from director Sebastián Lelio.

Shout out to my wonderful girlfriend for not filling me with a comparable amount of existential dread.

Gloria Bell (Moore) is a recently divorced woman looking to hit the reset button on her life. She has been frequenting a local bar that plays disco music in an attempt to spark a new romance while attempting to keep up with her children and ex-husband. And suddenly, she meets a new man named Arnold (Tuturro) who quickly sweeps her off her feet. However, like most things in life, the relationship is not all sunshine and rainbows, as many conflicting factors quickly trouble their bond.

Sebastian Lelio Returns to One of His Films

If Gloria Bell sounds at all familiar, that’s because it’s a remake of Lelio’s own film Gloria. The Chilean film was an indie darling upon its release back in 2013, and it’s also widely considered to be Lelio’s best film even though his last film, A Fantastic Woman, won the Academy Award for best Foreign Language Film just a year ago.

Funny enough, although a director remaking one of his or her own films is not common at all, Gloria Bell hits theaters just a few weeks after Cold Pursuit, Hans Petter Molland’s English-language remake of his own film In Order of Disappearance.

So why did Lelio want to go back to the well once more? Look no further than Julianne Moore. Lelio loves Moore as an actress, and looks at her as one of the finest that Hollywood has to offer. Can you really blame him?

You know, Lelio is on to something here. Multiple generations have passed at this point with Julianne Moore in their lives; she’s been around for so long, yet we sometimes forget just how wonderful she is as a performer.

I’ve continued to think about one scene in particular which encapsulates everything you need to know about Gloria. It’s a seemingly mundane scene in the opening few minutes where Gloria calls her children and leaves voicemails when they don’t answer. She asks them about trivial matters, echoing back a few incidental moments that have occurred to her recently. Moore acts her ass off in this moment — and practically every other moment in the film — so much so that I nearly wept like a child. Without a partner in life, Gloria is incredibly lonely. You feel every ounce of sadness dripping from each word in this scene, and Moore never has to change pitch or get a tear to roll down her cheek. It would sound enormously pretentious of me to say that Moore is “being” rather than “acting,” but I also wouldn’t be inaccurate.

Much to the chagrin of many, life doesn’t play out like Terms of Endearment. When we’re lonely or depressed, we don’t stop living; there’s no tearful exchanges as the music swells. Moore’s Gloria is very much a character in the real world; she’s a person with so much fright and anxiety inside but manages to keep it suppressed as she goes about her daily life. Moore doesn’t make any impassioned speeches that would play as an Oscar clip ahead of the announcement of Best Actress, but she offers double the emotion as she remains as captivating as ever.

A Charming Message for Aging Singles

Though I still have not reached an age where I can rent a car without paying an exorbitant, up-front insurance fee, I was overwhelmed with empathy for Gloria. I found this entire movie to be a beautiful and melancholy tribute to a section of Michael Stuhlbarg’s beautiful and heart-wrenching monologue in Call Me By Your Name:

We rip out so much of ourselves to be cured of things faster than we should that we go bankrupt by the age of thirty and have less to offer each time we start with someone new. But to feel nothing so as not to feel anything — what a waste!

With all the singles in their late-50’s or early-60’s in the film, we see what may possibly happen to those that have “less to offer each time [they] start anew.” Though they want companionship as they enter the later stages of life, it’s unbelievably difficult to open up once to again. Each character has their own form of relationship baggage, whether it be strained family dynamics or a lacking sense of individuality.

And yet, every character is still trying. Whether they find that right person or not, they want to feel in general and feel love for some other being or purpose. There’s still an intense yearning for something more; they feel as if they still have plenty to give before they transition to old age. It’s difficult to not fall in love with Gloria Bell with such a lovely message underlining it all. Gloria Bell is a Bit Fleeting

For all its wonderful pieces, I’m going to have troubling remembering that I saw Gloria Bell later this year when I begin to look back at 2019 in film. I love its focus on the real and its disco aesthetic that harkens back to when these characters were in the prime of their lives, but it’s story is quite aimless.

Admittedly, Gloria Bell‘s aimlessness is sort of the point; it wants to casually show how someone’s can be affected by late-life upheaval and if it’s even worth it to start over again. However, I found its rhythm frustrating at times. It’s as if the film is keeping the viewer at a distance to a fault, leaving many of the emotions that are not felt by Gloria rather inert. Honestly, I found myself bored by the supporting cast (even if it’s so extraordinarily wonderful to finally see John Turturro outside of the Transformers universe). All the performances are perfectly acceptable, but I never felt the correct amount of emotion. Or any at all, for that matter. It’s all a concerted choice by Lelio, one that he had total control over as a director. It just doesn’t work for me as well as it should have.

Instead of cinematic bliss for aging, single hopefuls, Gloria Bell is perfectly acceptable. Not every film is a masterpiece, but I really wish that Gloria Bell could have taken the extra few steps to get there as most of the main pieces are fully on display.

image via The Daily Californian

Between Gloria Bell and the forthcoming After the Wedding, 2019 is Julianne Moore’s year to once again show just how dynamic she is as an actress. Gloria Bell is all on Moore’s shoulders, and she carries the film towards a poignant discussion of dating and self-worth later in life. I adore Moore in this movie; she deserves all praise she gets.

Forgetting outliers for a moment, everyone will come out of Gloria Bell falling in love with Moore, but it’s the story and its presentation that will divide. Though it’s frustratingly unfocused in parts, I came out of Gloria Bell with touching insight on a rather lonely possible stage in life.

Thank you for reading! What are you thoughts on Gloria Bell? Comment down below!

You should! It’s quite good!

I will as well.