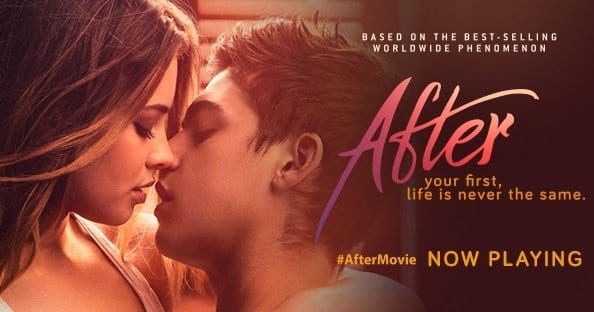 The book isn’t the most well-written prose, and there isn’t much going plot-wise as well, besides fighting and sex-ish activities. The movie hence has the baggage of the lukewarm source material to bear. It tries very hard to be something more, but alas, all that it ends up being is lackluster and forgettable.

Tessa Young (Langford) is starting her first year of college. She has a boyfriend Noah (Arnold) and an overbearing mother (Blair) who demands perfection from her only daughter. Tessa’s goal in college is to study and be committed to her academic pursuits, but finds herself distracted by her roommate’s friend Hardin Scott (Fiennes Tiffin). Is it lust, hormones, or something akin to love?

As I mentioned in my introduction, the book the movie is based on was originally fan fiction. To be specific, it is fan fiction about One Direction’s Harry Styles, which is why both Hardin and Harry have the same initials for their first and last name. Much like Harry, Hardin has quite a bit of tattoos on his person, and he is also British. After is the first book in a series of five books, so if the movie proves to be successful, we are going to have ourselves a Fifty Shades of Grey scenario once again.

Movies are always going to run into difficulties when adapting novels to the big screen. The greater issue here is that the book is very long (it has about 100 chapters), which gives it the run-way to set the groundwork for both the characters, something the movie doesn’t have the same luxury of doing. Hardin in the book is infinitely more toxic and violent. He gets into fights with ease, doesn’t know how to communicate effectively in a relationship, so he ends up being aggressive with Tessa when she doesn’t do things the way he wants. He is emotionally abusive. However, movie Hardin is toned down to make their relationship more palatable I suppose.

It is not that I want a portrayal of a toxic relationship. The issue here is that a lot of the tension that was a result of this characterization is now lost in the movie. The book plays up the dichotomy of bad boy falls for virginal good girl, and we don’t get that in movie. Hardin does not have any edges to his character, and he opens up quite easily to Tessa, which just doesn’t make sense. All the emotional baggage and angst just doesn’t come across.

The scenes also don’t connect in any meaningful way. The movie follows the major events in the book, like the truth or dare scene, or the bonfire gathering. It seems to be charting these events because it feels it has to, and not using them to build up characterization. If I had not read the books, I would feel rather cut off from the action. The movie seems to be pitching itself for fans of the book, which makes sense since they would form the main audience. This doesn’t mean that it gets to be lazy and stitch scenes together without any coherent sense.

Decent Chemistry Between the Lead Actors

The young actors attached to the main roles try valiantly to salvage this, but unfortunately, they signed onto a sinking ship. Langford portrays the wide-eyed innocent girl quite well, and emotes all the necessary emotions when she has to. Fiennes Tiffin is not as capable of an actor, but there are moments where he delivers his character’s intention without having to say anything. He has a beautiful voice, so when he adds the proper nuance and emotional cadence to his words, the scenes play off better.

The way Gage chose to shoot their intimate scenes is quite well-done. Consistently we have close-up shots of their faces, where every feeling and sensation is shown to us. This is not just a romance, it is also about Tessa coming into her own sexually. Gage tries her best to give us sensuality, but it comes across as rather diluted. I am not sure if Gage felt handicapped by the PG-13 rating or was just unable to muster any kind of sizzle. When I compare this to a movie like Call Me By Your Name, it doesn’t even come a fraction close to what that movie achieved with regard to first loves. There were more explicit sex scenes, but honestly we could already feel the cascading waves of sensuality before those scenes. Hardin and Tessa’s romance feels very tame in comparison.

The movie felt like it was racing to the finish line. It never took the time to linger and show us the love story. It feels like a check-list as opposed to a properly fleshed-out narrative. Why are Tessa and Hardin drawn to each other? Is it just because they had one argument about Pride and Prejudice in class? The movie rushes us quickly to the sex scene, but there isn’t love and care invested into that moment either. All the minor characters are forgettable, merely there to move the plot along or be one-dimensional.

The movie wastes the talents of Selma Blair, Jennifer Beals and Peter Gallagher. Blair actually injects more warmth into the mother as compared to the way the character is written. The conflict between mother and daughter isn’t well-conceived, with Tessa coming across poorly in their interaction. There is no consequence from the fall-out in their relationship. In real life, if your mother cuts you off, you won’t bounce back so quickly. Tessa never seems to struggle, which is why I couldn’t buy into the book, and the movie therefore fails as a result.

Oh yes, there is a plot twist, which was once again diluted to protect the sensibilities of the young people watching (I assume). I am not saying the book is in any way superior, because let’s face it, the movie is the way that it is in part because of the issues with its source material. However, the movie might have benefited from keeping Hardin an edgier character, as opposed to a boy who just likes to party and read literature. The intimate scenes are too tame. It doesn’t need more explicit visuals, just more consideration of how to create sensuality. This really is a dumpster fire of a movie, so please save your money for something more worthwhile.

Thank you for reading! What are you thoughts on After? Comment down below!

Holy heck. Thank you for taking this bullet for the rest of the staff. facepalm Even the trailer is horrible. My sympathies.

HAHAHAHA Pat! Yes it was painful. What happened to all the wonderful days of John Hughes’ teen movies?

Well, based on the promo picture alone, I feel I may be attracted to this girl, so…maybe I’ll give it a look eventually ;) ?

HAHAHA! Oh dear, good luck to you then. Let me know if you do watch it. You will probably hate yourself instantly, but I have to admit that she is beautiful.

“If the movie is successful…”

I’m going to go out on a limb and say that a Harry Styles fanfic where the love interest is shown to be cool and intellectual by wearing a leather jacket in the house while reading a book …is not going to be successful.
This feels like producers made a bet. How bad a source material can we get made?

Normally I would be inclined to agree with you, but let’s not forget how Twilight fan fiction got a trilogy of movies. A quick check shows that the movie made money. It had a budget of 14 million, and has made 48 million worldwide. That’s a decent buck.

What did you like about the book if I may ask? I am currently on the second book but have no motivation to finish it. I would really suggest just waiting until it gets the DVD release before watching it. It is definitely not the kind of movie one should watch in public hahaha

I love romance and even tho majority of their relationship is sort of toxic I liked how they were still able to find their way back to each other in the end and be truly happy. I love the way they loved each other passionately. I didn’t like the fact that the author changed the names tho..for eg. Harry was changed to Hardin. Lol I won’t go to watch it in theatres