Twenty-seven years after the release of the original, Sony Pictures has revamped the cult favorite, Flatliners, for the new age.  Containing a likable cast, 2017’s Flatliners hopes to add to the intriguing questions that the original posed.  However, judging by its Rotten Tomatoes score of a wopping 0%, it’s probably safe to assume that that’s not the case.  The following review will be spoiler free. 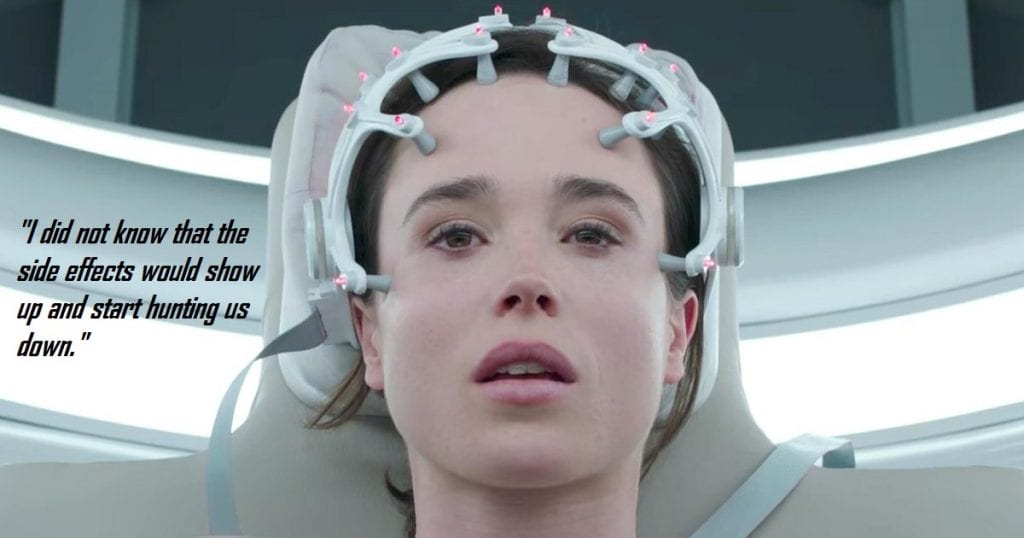 What happens to us after we die?  Five medical attempts to uncovers the answers to this question by taking part in dangerous experiments together.  The students are tasked with stopping the heart of one of the students for a brief period, then bring that person back to record their findings.  The students begin to stay under for longer periods of time, causing them to face their past sins and encounter some looming paranormal threats as the line between life and death continues to blur.

Ahh Sony, you just don’t seem to quit, don’t you?

Outside of their co-production with Marvel Studios for Spider-Man: Homecoming, here’s a look at the films that Sony and its subsidiary, Columbia Pictures, have produced since the beginning of 2016:

Clearly, this list isn’t exactly the best example of fine filmmaking.  Now, that’s not to say that that every movie here is unwatchable.  The Magnificent Seven and Life are perfectly acceptable films in the eyes of this critic.  However, what may be the bigger issue for Sony is that hardly any of these films left a serious mark at the box office.  In fact, Sony recently revealed that its film division reported a $719 million loss back in April.

Desperate for a hit, Sony turned to a remake of the cult hit Flatliners in hopes to put butts in seats.  However, with very limited marketing and zero screenings for critics for the film, it appears that Sony may just be digging itself into a bigger hole.

What little Flatliners has going for it comes from a likable cast.  Ellen Page is a national treasure, and actors such as Diego Luna, Nina Dobrev, and James Norton always do their best to make films work.  Although their characters are pretty unlikable and downright idiotic at times, each member of the main group of actors has some noticeable charm to them.

Ellen Page is giving it her all in this movie.  In a few moments she breaks down, conjuring up tears at will to add to her emotion.  Because of her performance, you care about her plight as her past begins to terrorize her.  Page’s character is of the few (if not the only one) to have legitimate motivations, allowing you to root for her if you so please. 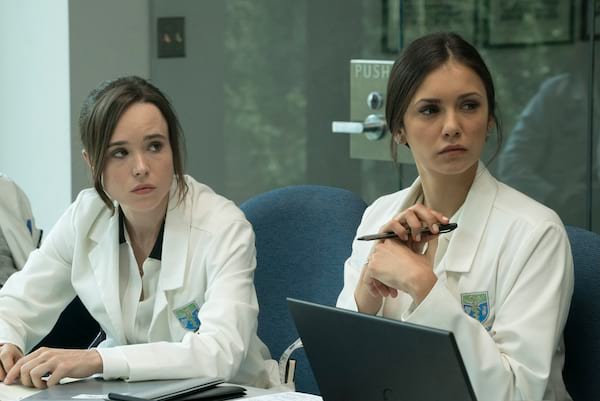 But, then again, this film is so dull that you’ll probably check out before you ever have to care for characters that are in some type of peril.

Sloppy Direction Does Flatliners In

Whether it was Niels Arden Oplev fault or not, Flatliners just can’t figure out what it wants to be as a film.  In some instances, it tries to be a heady, thematic discussion of the afterlife and sin.  Other times, it wants to be a young adult comedy where our leads say snappy bits of dialogue to each other.  It also tries to be a horror movie filled with jump scares.  But does it succeed at any of them?  No, not really.

It fails most at trying to create scary, tension-filled moments.  There’s no style to any of these “scares.”  Entities just appear then disappear without impact, making you wonder what was the point of it all. 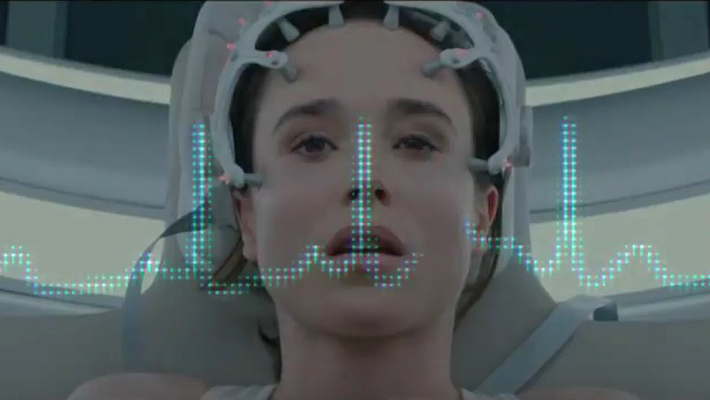 Some of the film’s technical aspects are pretty atrocious as well.  The film utilizes cameras with different frame rates at the most bizarre of times, causing characters to walk around with a unsteady look and feel.  To put it in perspective, Flatliners uses cameras that are meant to capture action when people are just hanging up clothes.  It’s very jarring to look at.  Technical issues such as this one run rampant through the movie.

A Meaningless Movie that Ends Up Just a Bore

The biggest detriment to this movie may be its inability to provide escalation.  Events (if you can even call them events) just sort of happen without any build-up.  The first act of this movie is fairly watchable, but the film doesn’t go anywhere from there.  Instead, we’re left to watch characters become mildly upset as we somewhat learn of their past mistakes.

Flatliners is just dull.  Everything looks drab and monotone, failing to breath any life into the project.  It’s really difficult to talk about this movie because nothing really happens.  If you don’t check your phone during this movie, you deserve some type of award.

Flatliners isn’t an atrocious dumpster fire that its 0% Rotten Tomatoes score would have you to believe.  But, there’s still really nothing about this film to recommend to general audiences.  Is it as introspective as you want it to be?  No.  Is it as thrilling as you want it to be?  No.  But is it at least scary?  No, no, no.  Fans of any particular genre won’t be able to latch onto a single part of this story, causing our likable leads to be trapped in a dull, hollow slog.  Flatliners gets a D-.

In the end, Flatliners falls flat.  For a movie such as this one, it’s very fitting to end with a lifeless pun. 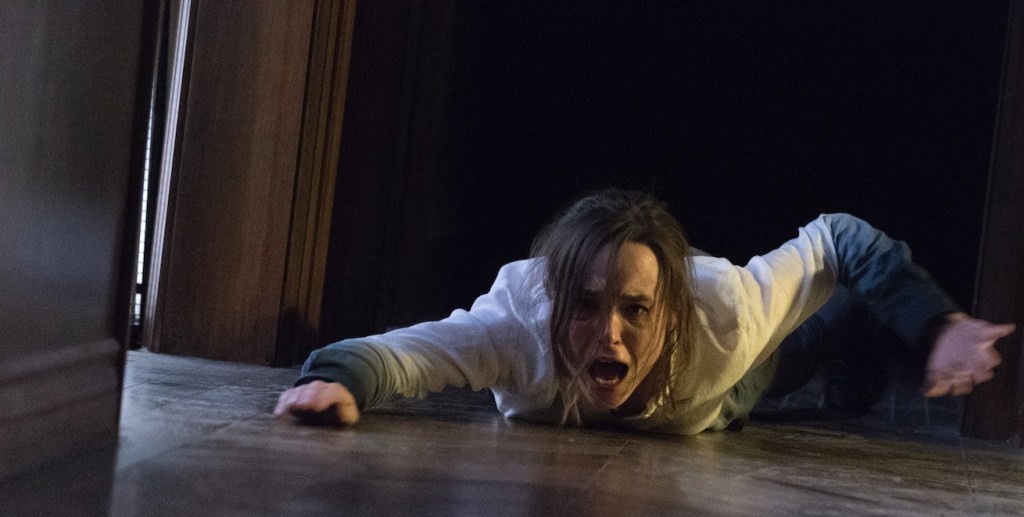 Thanks for reading!  What are your thoughts on Flatliners?  Comment down below!

your website is very nice, the article is very enlightening, I wish you continued success.

So the movie flatlined, eh? (Sorry, couldn’t resist.) I saw the original many, many years ago, and I do remember liking it.

Lol it took all of my power not to put that somewhere in the post!

Not really a big surprise to see this one failed to meet expectations. One sometimes has to wonder why Hollywood continues to make films based on old classics (then again the buzz around the new Bladerunner movie even has me very excited right now ?).

Who knows, Sony is really struggling so they probably franticly looked for something that they could maybe get some money from.

I’m continuing to look for writers to become part of the MovieBabble writing staff. If you want to write about movies, head over to https://moviebabble971852905.wpcomstaging.com/join-moviebabble/ to submit an application!