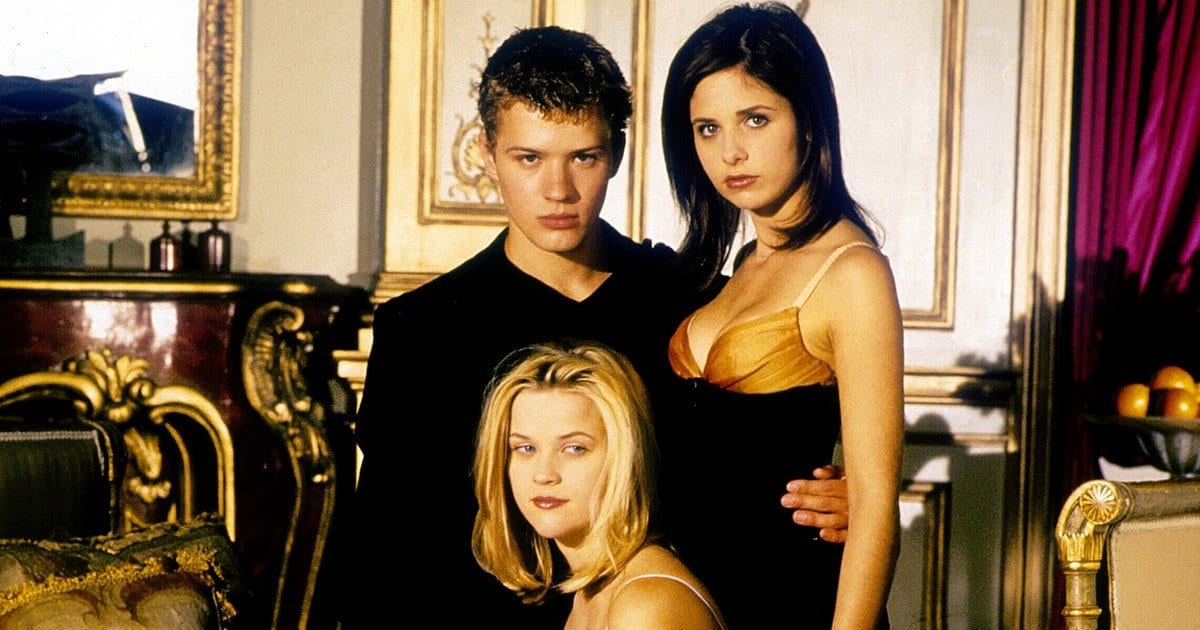 When Cruel Intentions was released, I was 9 years old, so of course it wouldn’t even be a movie I would have known or watched. It found its way onto my radar after I watched the teen horror hit I know What You Did Last Summer, which also had Ryan Philippe and Sarah Michelle Gellar in lead roles. However, there was no way I could actually watch Cruel Intentions, since back then it was either get the DVD or wait until it arrives on cable. It was a few years later that it showed up on my television screen, as one of those movies they play after 10 p.m. since young children are probably sleeping by then.

My dad was in the living room, but he had fallen asleep on the sofa, which explains why he didn’t immediately shoo me off to bed within moments of the film beginning. I was halfway through the film when he got up and switched off the television, telling me it was late and that I should go to sleep. I was still curious about the film, though at that point I didn’t understand a lot of it. The script is chock-full of innuendo, which my teenage self found puzzling. That was my last contact with the film, until it showed up on cable again and I was reminded about my unfinished business with it. So here I am, 20 years later, finally able to see Cruel Intentions in all its uncensored glory — one of the few benefits of adulting.

Cruel Intentions was entertaining yet explored relevant issues in relation to sex. Annette (Reese Witherspoon) perceives sex as an act that can only be done with love; Sebastian (Ryan Philippe) uses sex as a way to escape the insecurities he has about himself; while Kathryn (Sarah Michelle Gellar) wields sex for power and dominance. Because of these dangerous games they play using sex, it robbed an innocent (Cecile) of her own opportunity to discover sex on her own terms, being groomed by Sebastian (who in turn was manipulated by Kathryn) to mature faster than it was needed. There is vulnerability that comes with having sex, since it involves exposing yourself in the most intimate way possible. This is the struggle Annette faces, since there is desire and love for Sebastian, but there is also the fear of allowing herself to be with him in that way because of his reputation.

The writing is also clever, with the use of innuendo that allows the point to get across yet never having to cross the line into vulgar. For example, the scene when Sebastian massages Katherine and she lays her body on top of his, we understand the situation ‘arising’ from their faces alone, with Katherine’s comment of “I see things are looking up for you” giving me a good chuckle. Or Sebastian’s remark of “How are things down under” when Cecile (Selma Blair) mentions a trip she took with her father to Australia.

When Crimson Peak was released, there was a lot of discussion about the sex scene between Tom Hiddleston and Mia Wasikowska’s characters. In contrast to how it usually is (objectification of the female body), the only nudity involved was done by Hiddleston. Not only is Wasikowka’s character fully clothed, she is also on top. Having watched Cruel Intentions, I noticed a similar trait, with Philippe the only one doing the nudity. For a movie about sex, it shows a remarkable amount of restraint, which explains its status as a cult classic years after its release.

The film often gets the comment of having cheesy, horrible acting. I never felt that this was the case. Yes it is trashy, but it is the good kind of trash. I found the young actors to be convincing in their roles, with Gellar and Philippe relishing their villainy. The studio was actually thinking of Katie Holmes for the part of Annette, which might have ended up being a tiny Dawson’s Creek reunion given Joshua Jackson’s part in the movie. Philippe was dating Witherspoon at the time, which is what led director Roger Kumble to ask him if she would be willing to take on the role. She agreed only on the condition that she got to beef up the character a bit, which is why Annette ended up being such a tough cookie.

The break-up scene between Philippe and Witherspoon was particularly hard to watch, because it felt so real. This was probably because the two were together in real life, so it must have been hard to portray that scene, even though they know its pretend. Apparently Philippe was so affected he threw up while shooting the scene. As the scene unfolded, I felt like I had stumbled into a private moment that I should not be watching — that is how intimate and raw it was. When Kumble was scripting this film, a lot of the scenes were imagined to music. However, Kumble ran into a lot of these problems when trying to create his musical vision. Smashing Pumpkins refused to sell the rights to their song, and Kumble had to fork out money to The Rolling Stones for The Verve’s “Bittersweet Symphony” because the song was sampled from The Stones. Thankfully, it all worked out in the end.

Maybe it was a good thing that Smashing Pumpkins said no, because “Colorblind” by The Counting Crows was a perfect fit for the sex scene between Witherspoon and Philippe. The lyrics are beautiful, depicting the moments before and during sex, where the world just kind of fades out because you are feeling so much (hence colorblind). For a teen movie, it really has such good music, with The Verve’s “Bittersweet Symphony” in the conclusion of the movie being a prime example. While Annette has avenged Sebastian and gotten recompense for his death, this unfortunately would not bring Sebastian back. The ending moments of Annette driving Sebastian’s car, in possession of his journal, wearing his sunglasses — I couldn’t help but notice the symbolism at play.

In the beginning of the movie, Sebastian tends to wear his sunglasses quite a fair bit — in a sense it reflects the myopic way he sees the world. When he goes to declare his love for Annette, he is no longer wearing them, and they creep back on briefly after Kathryn manipulated him to break up with Annette, but then he never wears them again. She showed him a different world and opened up his sight — life with her meant beauty, color and love. The cleverness of this is that Sebastian is not the only one who has changed, Annette has done so as well — which we see when she dons the sunglasses at the end. She learns, just like we do, that sometimes a bit of cruel intentions is necessary — even if they are dangerous.

Thank you for reading! What are your thoughts on Cruel Intentions? Comment down below!

HAHAHA! This comment made me laugh out loud :) You do you girl ❤️

What a fun read! I totally get where you’re coming from, too – I taped the movie from cable TV as a kid so was only used to the TV-14 version before getting the (comparatively) spicy R-rated DVD in college. And such a treat to revisit, with its sharp dialogue and memorable moments.

Ikr! Though with the accessibility of the internet now, I doubt kids today have this problem, which might not be such a good thing haha

Well, coming from a brown household like you, there’s way too much sex in this film for me to be comfortable watching it and not feel aroused, lol, which is something I don’t wanna feel.

I know what you mean hahaha. I think that’s maybe why I put off watching it all these years. I like it mostly for the cleverness in the script.

This is one of my favourite films!

Me too! What makes it a favourite for you?

tbh I don’t know… the song at the end is s perfect fit though.

I was a teenager then. I don’t remember if I saw it in theaters, but it’s one of my favorite movies from that period.

You got to experience it in the best way possible, since it was meant for a teenage/young adult audience upon its release. I found the writing to be quite clever and enjoyed the performances. The sequels, however, look trashy.

I didn’t like it then I don’t like it now, I feel it’s a pretty lame plot and unnecessarily imposed sexual undertones. Brash.

Its meant to be a sexy movie, which is a risky thing given how sketchy we all are when it comes to content that revolves around sex. If you look closely at the plot of most teen movies, they aren’t exactly rocket science material.

That’s just my opinion , high school dramas are mostly centred around sex and an enjoyable watch when done sensually. Yep I agree, no rocket science.

Haha no worries man! I always find movies to be subjective. What’s a good teen flick for you?

I love this movie. I was 12 when this came out and I somehow got a copy of it from my friends brother and I watched it when No one was home…. and whoa…. a lot of it went over my head… I watched it again much later when I was in high school and how the hell did I get away with watching this… lol definitely not for a 12 year old, but I digress. Bitter Sweet Symphony has been and always will be one of my favorite songs. I loved it when I first saw the movie and I love it now. Awesome post

How did you get away with watching this?! Haha I tried to but was unsuccessful. But yes, if you aren’t of a certain age, a lot of the material would just fly over our heads. Now I am almost 30 and chuckling away at it but when I was younger I didn’t see what the fuss was all about.

So much agree on “Bittersweet Symphony”! The song blew up after the movie was released. Thanks for the comment :)

I was sneaky lol I was in 4th or 5th grade and got a copy of American pie somehow, which I was like what the hell is this. But yeah I didn’t quite get Cruel Intentions at the time. I’m 30 now and just watched it for the first time in a while and I was like how the hell did I watch this at a young age. it’s now in my top 20 movies