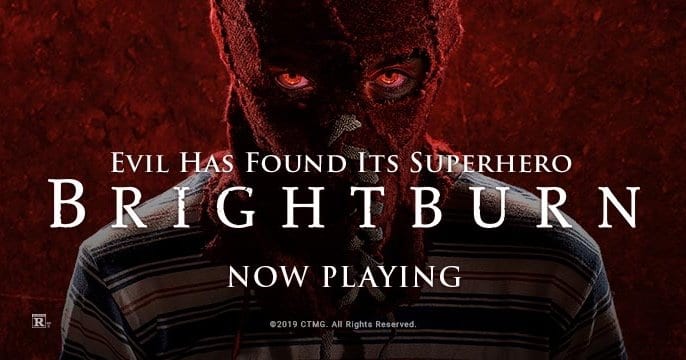 Superhero films have become a deep and expansive genre over the last decade or so. Before, the occasional superhero film would pop up, usually featuring one of the more popular characters (Batman, Superman, Spider-Man), touch that niche audience, and go away. Now, because Hollywood is a copycat industry (like every other form of entertainment), these films flood the market. Heroes such as Thor, Captain Marvel, and Shazam are household names and tentpole characters. With the genre as popular as it is now, it can get a little tiresome. There is a clear formula for what makes these films successful and for the most part the superhero story can only be so different. Especially the origin of the superhero. This is exactly why I was so excited for Brightburn.

Brightburn tells the origin of a young man who discovers he has superpowers. After a spacecraft crashes on earth, a baby is discovered and taken by Tori and Kyle Breyer (Elizabeth Banks and David Denman), a couple that is unable to have a child of their own. The couple raises the child as their own, being only partially honest with him. They hide his spacecraft and mysterious origins and tell Brandon (Jackson A. Dunn) that he was adopted. But strange things start happening to Brandon and his powers begin to manifest. He goes down a path more akin to a villain than a superhero.

Brightburn is clearly a subversion of the superhero genre. Rarely do we get to spend significant time with the villain or get a substantial telling of the villain’s origin. It initially looked like something fresh and new. Instead, it’s bland, unoriginal and not at all what it appears to be on its surface.

The premise alone for Brightburn is enough to create substantial anticipation. I enjoy subversions of any genre, especially if it skews a bit darker. The R-rating and foreboding poster create even more anticipation for something new to a genre that I quite enjoy. Unfortunately, my anticipation quickly evaporates because Brightburn is nothing more than a good idea. From the start, Brightburn is a cliché horror film, that offers very little in the way of originality. Director David Yarovesky relies on jump scares and gore to bring his horror, all of which fall short of anything that resembles actual horror. The acting performances don’t provide much in the way of help. Each is bland and unspectacular. Elizabeth Banks really goes for it in a few scenes but the effort isn’t enough to save a character that acts in an unnatural way. All around Brightburn disappoints, which is a real shame because there is a path for this to be a really good time.

Subverting the superhero genre by presenting a person with special abilities but having them choose darkness instead of light, is a great idea. One that I hope someone else decides to run with in a more interesting way. A premise alone is not enough to make a good film, the story has to match it (or at least get close). Writers Brian and Mark Gunn don’t bring this premise to life at all. They appear to lean on traditional horror tropes and pair them with traditional superhero tropes, to bring about a messy story. Poor pacing aides in the messy storytelling with a slow-paced beginning and a breakneck one in the end. Brandon goes from an innocent, misunderstood kid to terrorizing killer rather quickly. There is also a lack of motive which is another glaring shortcoming from a storytelling standpoint. If the premise alone can carry you through this film, then Brightburn will be a good time. Personally, it is bland, boring and unoriginal, which is also incredibly disappointing. 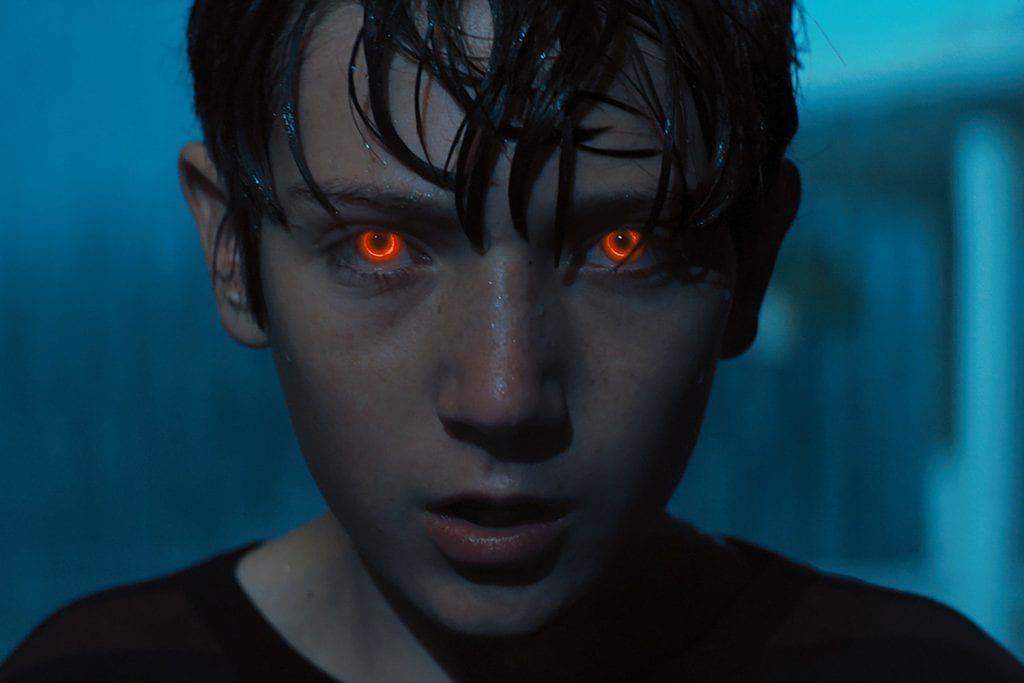 I’ve been a horror movie fan for as long as I’ve watched movies. Gore is nothing new to me. While it’s not my favorite part of the genre, I can stomach a fair amount before it becomes overkill. Brightburn is far the Saw franchise but for what it is, there is more gore than necessary. When Brandon decides to go on his killing spree (which isn’t a spoiler because the trailer reveals all of his kills), some blood is expected. However, a close up of a character pulling glass out of her eye and another character literally holding his jaw together is a bit much.

It becomes exhausting because there is no real point to it. You can tell that these gory things are happening simply for the effect and for no other reason. In those examples, the scene could have played out exactly the same with a similar effect without those particular moments. I’m good with gore, and even a lot of it if the story calls for it. Brightburn doesn’t call for it. If it’s going to be there simply to justify the R-rating or shock the audience, then I’d prefer more creative storytelling than killing.

It’s strange that a film with a premise like Brightburn can end up so cliché. The problem however, is that Brightburn isn’t actually about what it says it’s about. It’s painted as a supervillain origin, even in its IMDb description. In actuality, it’s a basic possessed child horror film. In that subgenre of horror, Brightburn shakes up to be exactly like every other film before it. Misunderstood kid, over defensive mother, family that ignores his disturbing behavior…stop me if you’ve heard this before. Each beat of this story is painfully cliché of a genre not known for producing great stories. Unfortunately, this film feels more like The Prodigy than anything else. That is not a comparison you want. 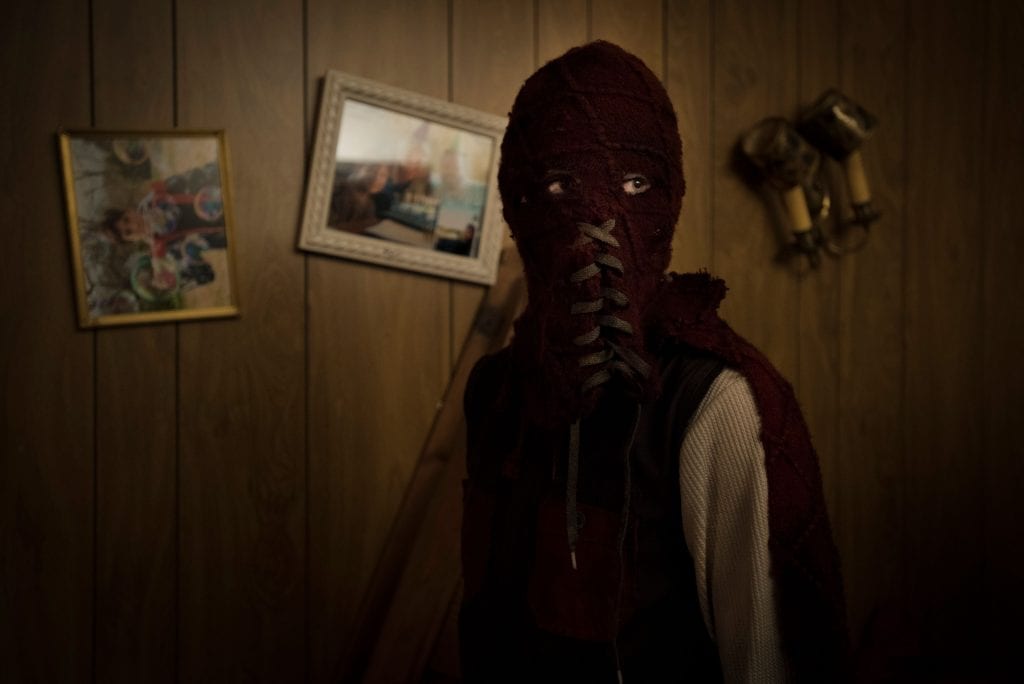 Most of Brightburn falls flat, but there is one small aspect of the film that is enjoyable. The actualization of Brandon’s superpowers is quite interesting. It feels more practical and less grand than a traditional superhero movie. Brandon’s ability to fly is utilized especially well throughout the film. My favorite shots in the film feature him hovering in the air, almost like a silhouette, with his cape whipping in the air behind him. This ability is also used well for horror. The suddenness of his ability is pretty scary. It’s the first time I’ve ever thought of this ability as terrifying for us mere mortals. Brandon is essentially an inversion of Superman and visually that is interesting. But it’s not enough to save the film. 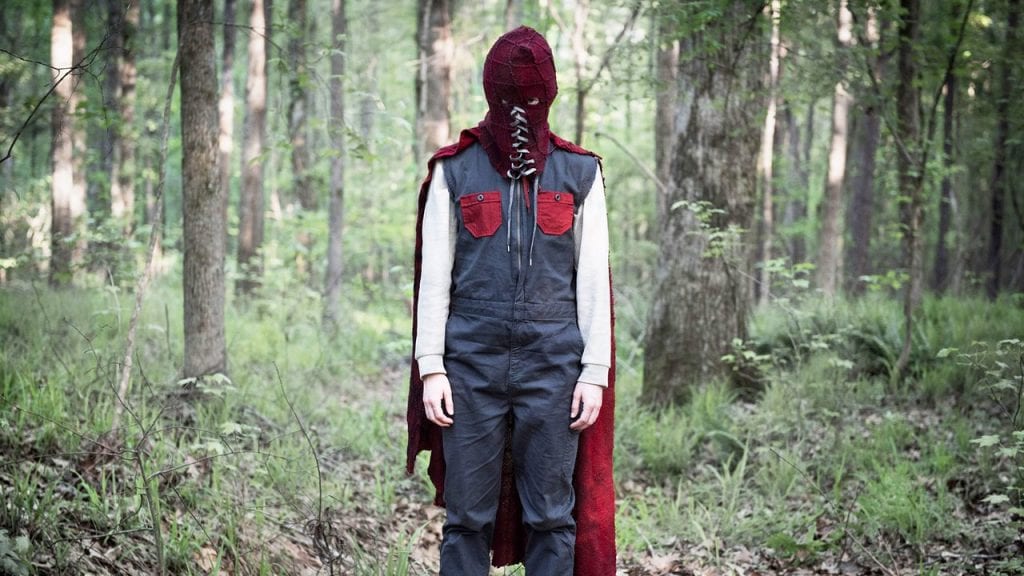 Brightburn is an easy film to skip. There isn’t anything new on screen to see and it’s wasted potential will only frustrate you. An opportunity is here for a story like this to exist and be very good. Brightburn shows us that, so if we get a better version in a few years that may make this worthwhile. Until then there are better ways to spend your night at the movies than with this film.

Thank you for reading! What are your thoughts on Brightburn? Comment down below!

I’m not a fan of the genre, but a new take on it could have been refreshing… it’s a piety that this one didn’t do justice to the idea! Thanks for the interesting review!

The fresh take is what was so exciting! I hope in a few years someone else can pick up this idea and make a better film because I’d still like to see this take explored just in a better film.

I thought it would be worth it. But thank god I read this review before I went to the movie theater. 👏🏼👏🏼👏🏼👏🏼👏🏼

Glad I could help!

I can’t wait to see this move!!