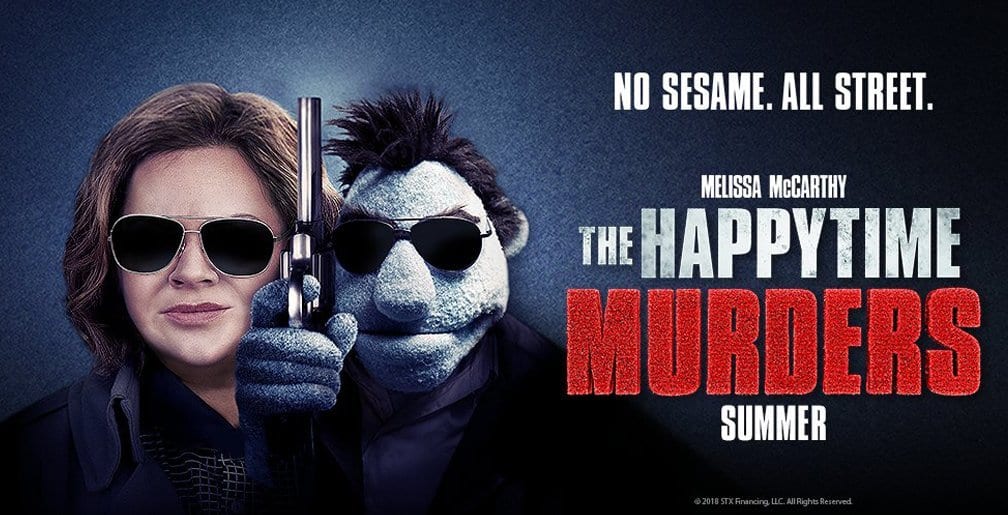 The Happytime Murders is the latest from Henson Alternative, the mature arm of Henson’s Muppets. It’s raunchy, it’s puppety, and it’s as over the top as over the top can be. It may not be the Muppets you grew up with, but is it worth seeing none the less? To answer that question, I present you three taglines I came up with for the film.

If you’re wondering why these taglines are outrageously bad, it’s because the movie is out — you get my point.

In Los Angeles, puppets and humans live together in prejudice. Former cop turned P.I. Phil Philips (Barretta) is tasked with finding the person responsible for sending puppet Sandra (Davies) blackmail letters. As he searches for clues, Philips stumbles upon a conspiracy to murder the entire cast of the hit puppet-human show, The Happytime Gang. Being forced to work with his former partner, Det. Connie Edwards (McCarthy), Philips must find out who is responsible for the murders and why.

Aided by his secretary (Rudolph), Philips and Edwards search for the remaining members of the Happytime Gang, including Philips’ brother (Yerrid) and his former love interest (Banks). As the Happytime Gang comes further under fire, Philips is forced to reckon with his checkered past and the prejudices of an anti-puppet society.

“Can You Picture That?” 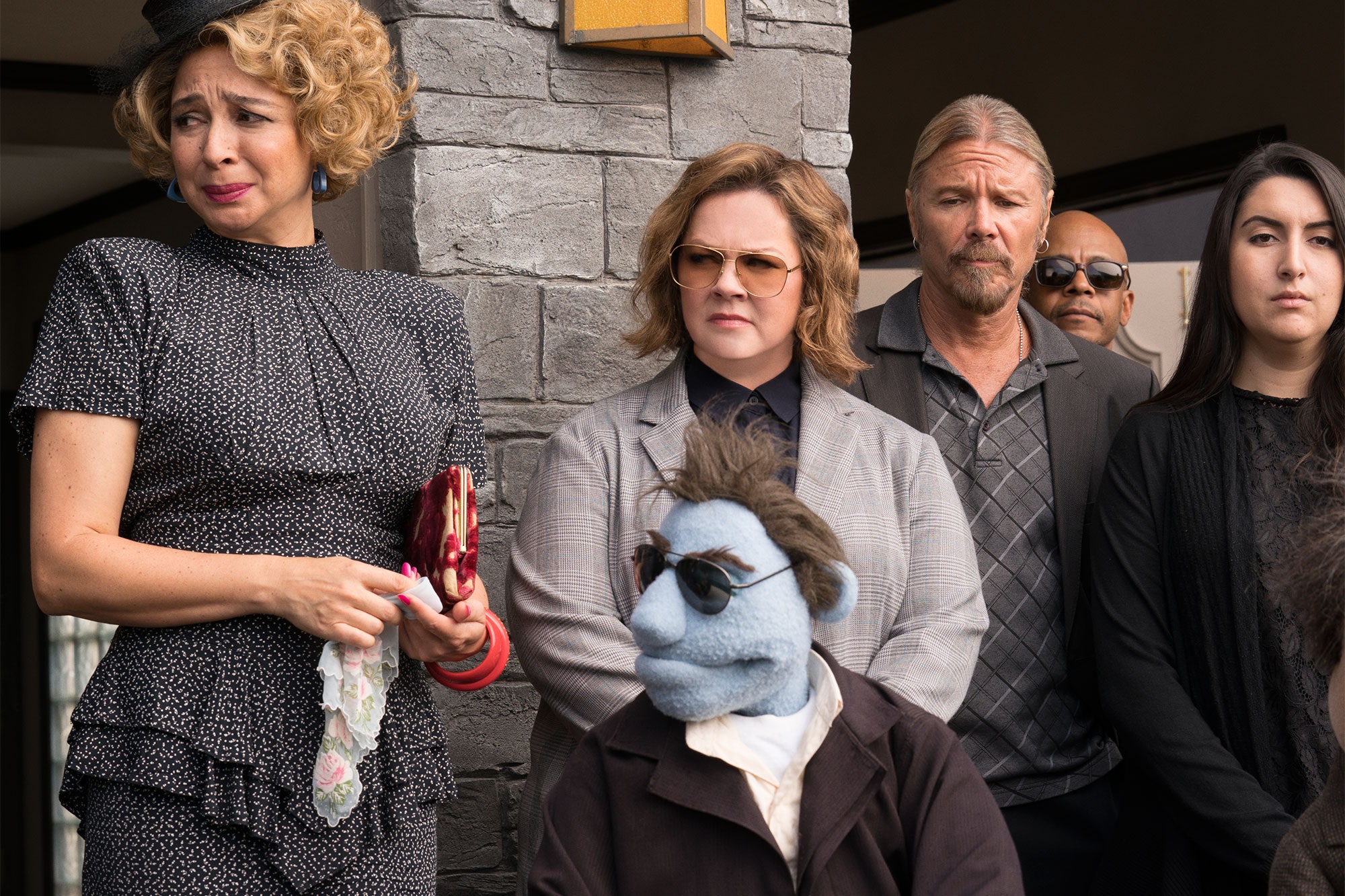 Despite having started as a program for adults, the Muppets have generally only succeeded when targeting children. The Happytime Murders will likely continue this trend. This isn’t because of its appeal as an adult film, but from its failure to appeal. On one hand, the film is a by the numbers detective story. On the other hand, it’s basically Netflix’s Bright, but with puppets. Either way, it fails to be memorable in any semblance of the word.

The film feels lost in trying to either make a profound statement or tell a compelling character driven detective narrative, but executes neither thread to much effect. Characters feel flat and unsympathetic, rapidly changing their characteristics on a dime. The film lacks consistency from start to finish, as sometimes its an outrageous comedy and at other times its trying its hardest to be a gritty noir film. The film really doesn’t have much to say or do, and so it drags itself out excruciatingly.

Despite the general letdown that is The Happytime Murders, there are two means in particular by which the film falls flat on its felt face. First, is the comedic aspect of the film. All of the truly funny moments are in the trailer. There are a few good gags here and there, but most jokes fall short of funny and just seem bizarre, desperate bids for a quick laugh. Second, the incredible talent behind this film is extremely wasted. In particular, Joel McHale, Leslie David Baker, and Elizabeth Banks are used far below their potential. Then there’s Melissa McCarthy.

I think that Melissa McCarthy is hilarious when left to her own devices. She has a commanding presence and a keen sense of timing. Her episodes of SNL always deliver some of the best moments of the season, and her late night appearances are always a delight. However, most movies don’t take advantage of Melissa McCarthy. Instead, McCarthy is usually shoehorned into lazily written roles that ten years ago would have gone to Kevin James.

Like McCarthy, James provides a likeable charisma and witless charm to his roles. Studios used this charismatic prowess to typecast him into the same role. He is cast as the likeable, but overweight and witless every-man. He never seems to catch a break, but eventually finds love. You know these types of roles, the Paul Blarts and the Lamonsoffs of any Happy Madison movie. Despite his vocal comedic talents, he’s always the butt of a thousand fat jokes and physical comedy bits.

Melissa McCarthy has unfortunately found herself in this same pattern. For whatever reason, writers can’t seem to write funny lines or bits for her to do. Instead, she’s the butt of a thousand fat jokes and jabs about her appearance. This typecast may have worked the first time or two, but it has long since worn its welcome. This is especially pertinent in a film where half of the cast is an odd-of-appearance puppet.

The Happytime Murders falls short at just about every interval. It’s occasionally funny,  but not funny enough to compensate for its total runtime. It’s intriguing, until it’s premise becomes a by-the-book revenge tale. Unfortunately, there isn’t much to say about the film; because there really isn’t much to it. It isn’t a matter of what the film is doing, but what it isn’t. In order to understand why The Happytime Murders falls so flat, it’s important to look at what makes the Muppets memorable.

When the Muppets Are At Their Best 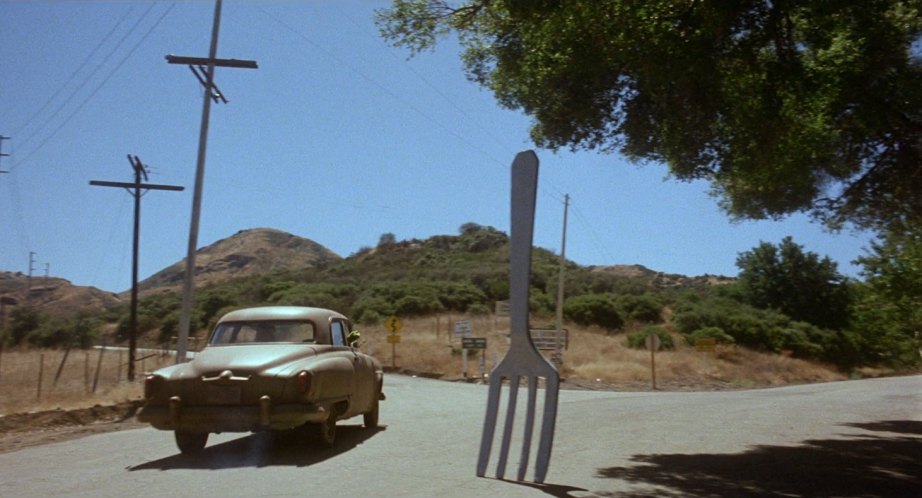 The Muppets are at their best in two particular works, The Muppet Movie and The Muppet Show. In these two iterations, the Muppets thrive because they are absurd, irreverent, and satirical as can be. They don’t necessarily have to be kid friendly to work, but the characters thrive in that PG to PG-13 level of subtle adult humor. So, whether its Fozzie Bear saying “Just for the Halibut” or Gonzo’s relationship with chickens, the Muppets always find a way to appeal to the more adult senses of humor. If you’re old enough, or cultured enough to have seen it, think back to 1979’s The Muppet Movie. What can you recall? 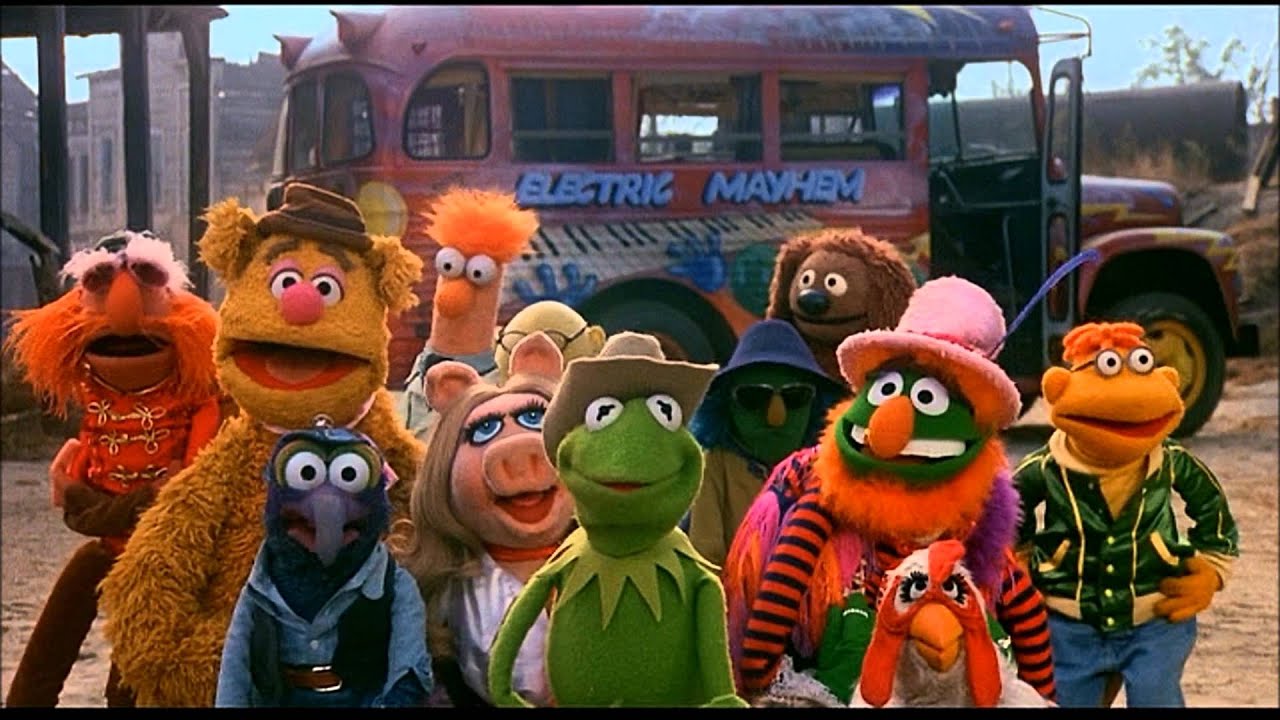 Image via The Muppet Movie

Is it the literal fork in the road? Maybe it’s the dozens of celebrity cameos? Or is it the music? Perhaps it’s a combination of all three. The Muppet Movie outshines The Happytime Murders because it leans fully into the absurdity of itself. The 1979 film doesn’t waste time trying to explain the puppets coming to life or the fact that a frog can sing and dance. Instead, it just dives right in and presents a world where the two coexist humorously. The plot is simple and silly, the dialogue is absurd, and the characters are caricatures. 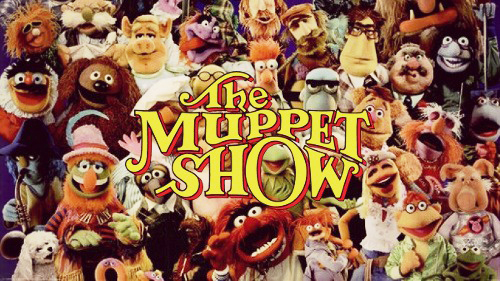 The Muppet Show is equally as absurd as The Muppet Movie, but it is also much more satirical in nature. Parodying the likes of Saturday Night Live, Ed Sullivan, Johnny Carson, and every celebrity/Hollywood trope imaginable, this show is a gem. Whether it’s Pigs in Space, Statler and Waldorf’s jabs at the show itself, or Kermit’s irreverent charm, the show pokes fun via every device imaginable. Much like The Happytime Murders, this show takes place in a grounded setting. The Muppets interact with real actors and actresses, discuss real events, and approach real topics.

While The Happytime Murders stems from a premise rife with potential, it falls short in nearly all accounts. At its best, it’s mess. At its worst, it’s another casualty of Hollywood playing it too safe and predictable with a film that is anything but what viewers are used to seeing. The film suffers because it fails to embrace what makes the Muppets, and puppets in general, memorable.

Granted, this isn’t a “Muppet” movie. However, the involvement of Brian Henson and utilization of Henson’s signature brand of puppetry mark it as such. The studio is aware of this, as the film was marketed with references to Henson’s Muppets both from the movie/show and from Sesame Street, much to the chagrin of Sesame Workshop. The failure of 2015’s The Muppets should have served as an indication that adults just don’t buy into the puppet medium. The Muppets simply don’t thrive in a real world, adult setting, much less an R-rated one. 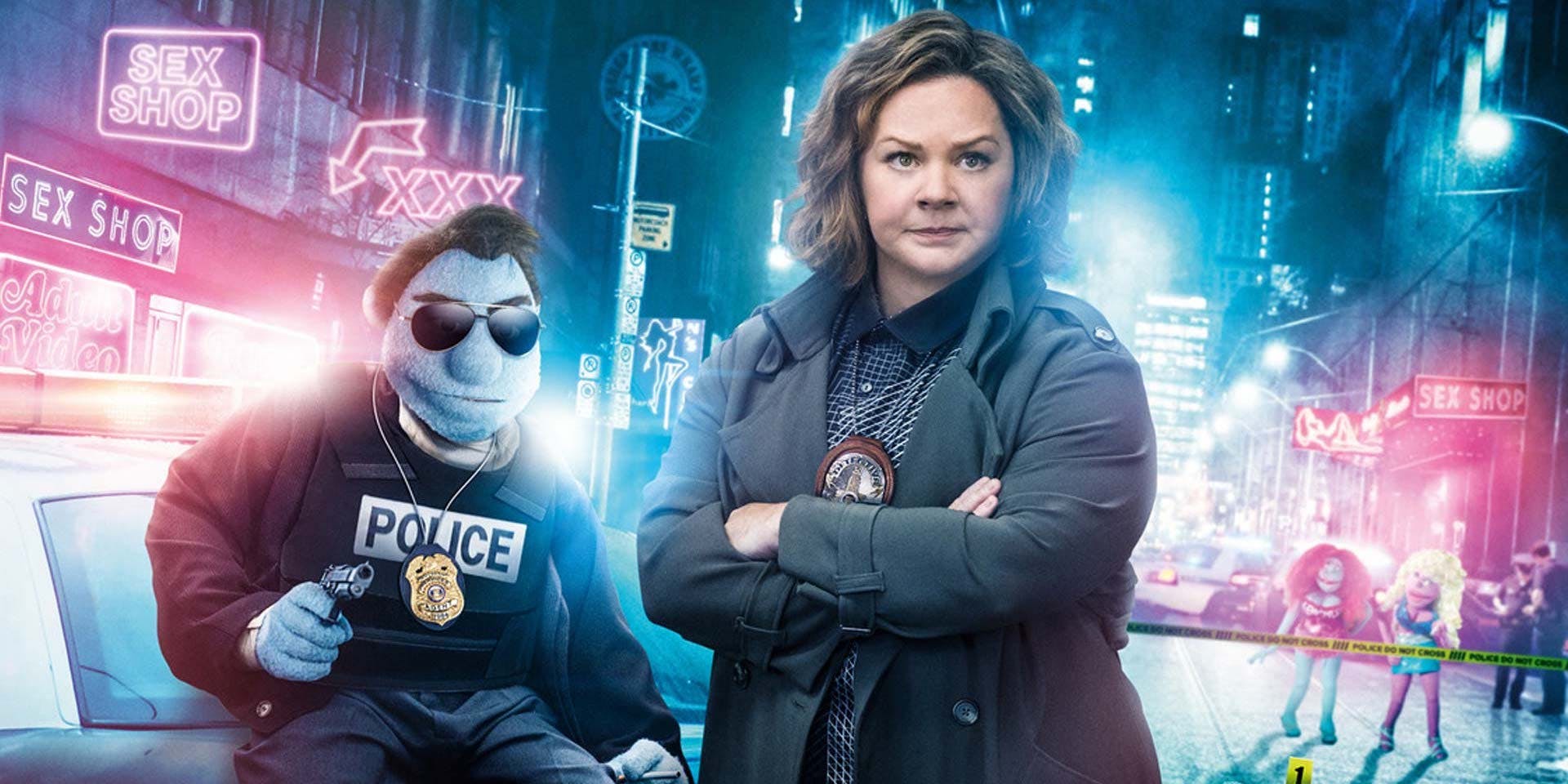 Thank you for reading! What are you thoughts on The Happytime Murders? Comment down below!