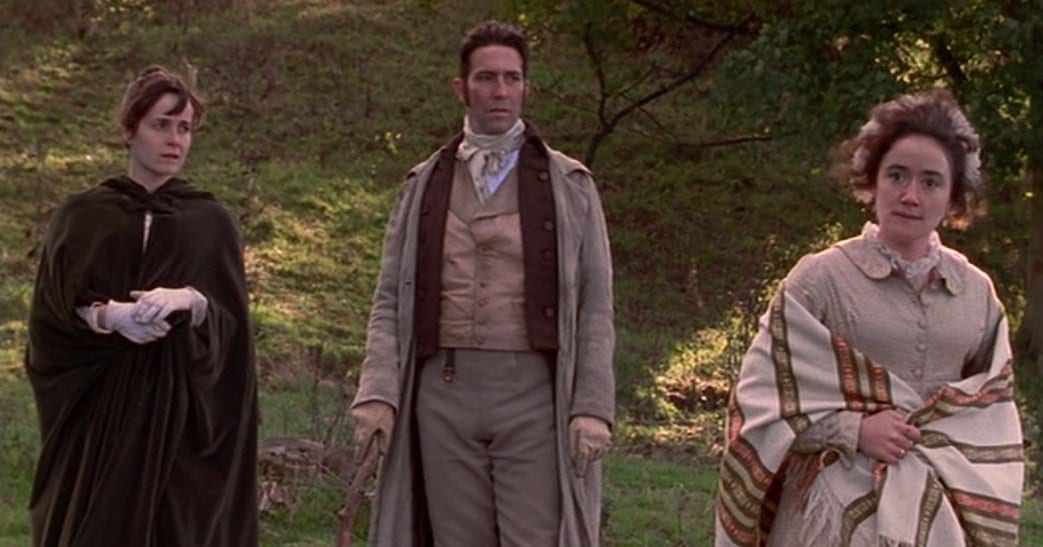 Among every fandom, there is bound to be disagreements as to preferred actors, characters and narratives when it comes to film adaptations. In the Janeite community (those who are fans of Jane Austen and her novels), the 1995 adaptation of Persuasion is almost universally adored and appreciated.

Persuasion is the story of love, loss and second chances. Anne Elliot (Amanda Root) is the middle daughter of a baronet. Still single and in her late twenties, Anne is looked down upon by her family. Eight years before the story starts, Anne was in love and ready to marry Frederick Wentworth (Ciarán Hinds). Frederick is a naval officer who had everything to offer Anne except class, money and connections. Anne’s widowed and emotionally unavailable father, Sir Walter Elliot (the late Corin Redgrave) opposes the match. Her godmother, Lady Russell (the late Susan Fleetwood) has the same sentiments and convinces Anne to break off the engagement.

In the present, Frederick is now wealthy, respected and the catch of the season. But he has not forgiven or forgotten that Anne rejected him. Anne is still regretting her decision, in addition to dealing with her spendthrift father, who has bankrupted the family. Being in close quarters is helping neither of them to move on. 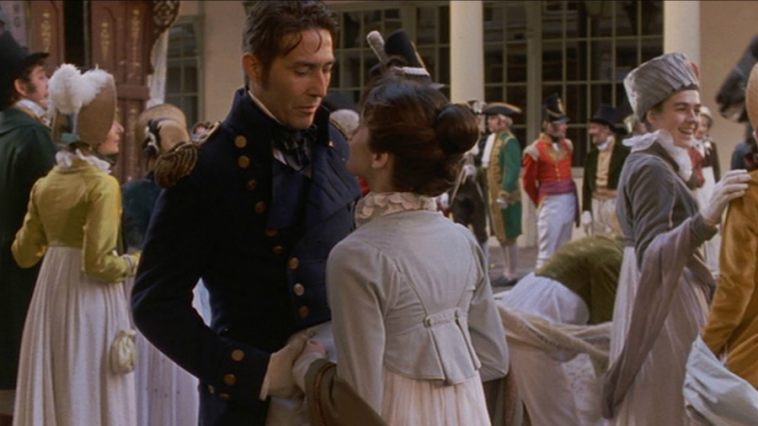 Is There Such a Thing as a Perfect Book to Film Adaptation?

Hollywood has often looked to the literary world for inspiration. Many novels have, for better or for worse, have made into films. Some are made to the derision of the novel’s fans who believe that the film has desecrated what they consider to be literary perfection. Though I understand that some creative teams may make minor changes to character, narrative or dialogue (the 1994 Winona Ryder Little Women and the 2005 Keira Knightley Pride & Prejudice come to mind), it is incumbent that the film remains as true to the original work as possible.

The answer to the question is yes, that it is possible to make a perfect book to film adaptation. However, that requires the filmmakers to adhere 100% to the work that the film is based on. Every line, every costume, every scene must look like it came out of the head of the author. But that is rarely done, for any number of reasons. Many filmmakers come close to the original work, but there are often changes made along the way.

As a Janeite, I’ve seen quite a few adaptations of her work over the years. As an audience member, my top two criteria for a successful Jane Austen adaptation are chemistry and age. It goes without saying that chemistry between actors is important for any film, but sometimes there is no chemistry, regardless of how good the actors are. In this film, Root and Hinds have natural chemistry, even when their characters are emotionally distant from one another. Sitting in the audience, one can feel the emotions crackling between them.

The age of the actor is the other key factor in a Jane Austen adaptation. If there is one flaw in certain adaptations, it is the age of the actors. I love the 1995 Sense and Sensibility, but among two leading ladies, Kate Winslet was the only one who was close in age to her character. Emma Thompson was then in her mid-thirties playing Elinor as a woman in her late twenties. In the novel, her character is nineteen when the story begins. At the time, Winslet was in her early twenties playing sixteen-year-old Marianne. There is nothing wrong with casting a woman in her thirties to play a character in her early twenties. But there is something to be said for casting an actor whose age in real life comes close to or matches the age of the character.

When Persuasion was shot, Root was in her early thirties and Hinds was in his early forties.   While I would normally argue for younger casting, in case of Persuasion, the casting of slightly older actors works. Anne and Frederick have been scared by their eight-year separation. On the surface, both characters are polite, sociable and appear to be fine with being in each other’s presence. But it doesn’t take much to see the unspoken emotion just beneath the surface. It also takes a talented actor to slowly reveal their character’s hidden heartache underneath the mask of civility. 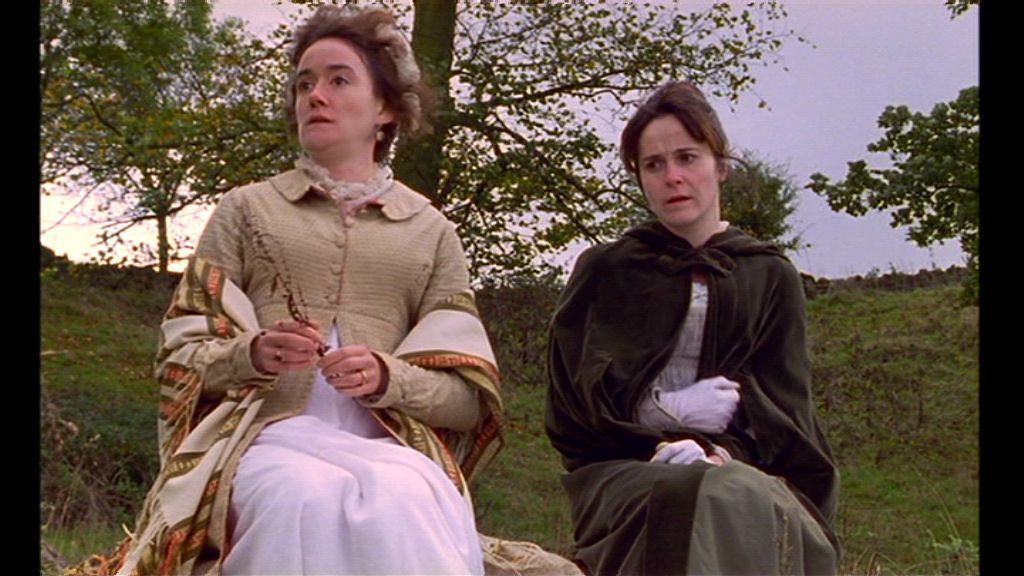 Amanda Root was Surprised by The Love from The Fans

For some actors, meeting the fans at fan events can be tedious and necessitated by the additional income they receive for attending. For other actors, it gives them a chance to meet their fans in person. The highlight of last year’s Jane Austen Society of North America Annual General Meeting (JASNA AGM — a sort of love child of Comic Con and an academic convention) in Kansas City was Root’s appearance. She was not only generous with her time and company, but she was also genuinely surprised by the love from those who were in attendance. 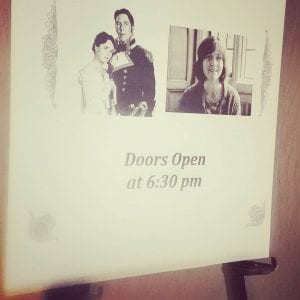 The Supporting Actors are Absolute Perfection

One of Jane Austen’s strength as a writer was to give life not just to her main characters, but to her supporting characters who come into and leave the story as needed. The actors who are playing the supporting characters are absolute perfection. Redgrave as Anne’s father, Sir Walter is the epitome of the metrosexual centuries before the term became part of our cultural lexicon. Fleet as Anne’s godmother is both cringeworthy in her snobbiness and slightly heartwarming when it comes to her maternal affection for Anne.

As Anne’s sisters, Phoebe Nicholls and Sophie Thompson are equally superb. Nicholl’s Elizabeth is her father’s mini-me while Thompson’s Mary is a hypochondriac who complains about everyone and everything. Emma Roberts as Louisa Musgrove, the silly teenage girl who might be the cause of Anne and Frederick’s permanent separation, is as cringeworthy as any silly teenage girl can be. On the male side, Samuel West as Mr. Elliot, Anne’s cousin and suitor is just charming and slimy enough to convince the audience that Anne may not remain single for much longer.

In short, yes, this film is the perfect Jane Austen adaptation. The cast is perfect. The movie adheres like superglue to the novel. The movie is romantic, dramatic, hopeful and sad at the same time. The ending gives anyone hope that perhaps, they will find that special someone, even when they are past their “bloom”.

Thank you for reading! What are your thoughts on Persuasion? Comment down below!

I actually like the casting of the newer version more (way more age-appropriate actors), but the ending ruined it for me. I didn’t mind Winslet as Marianne, as I think she still passes, but ONE OF THESE DAYS we might get an adaptation that doesn’t cast Col. Brandon 10+ years older than 35 and Mrs. Dashwood 10-20 years older than 40. (I still think she should’ve tried for Col. Brandon… :D )

You and I are on the same page. I agree about the 2007 adaptation, but the 1995 adaptation is perfection.