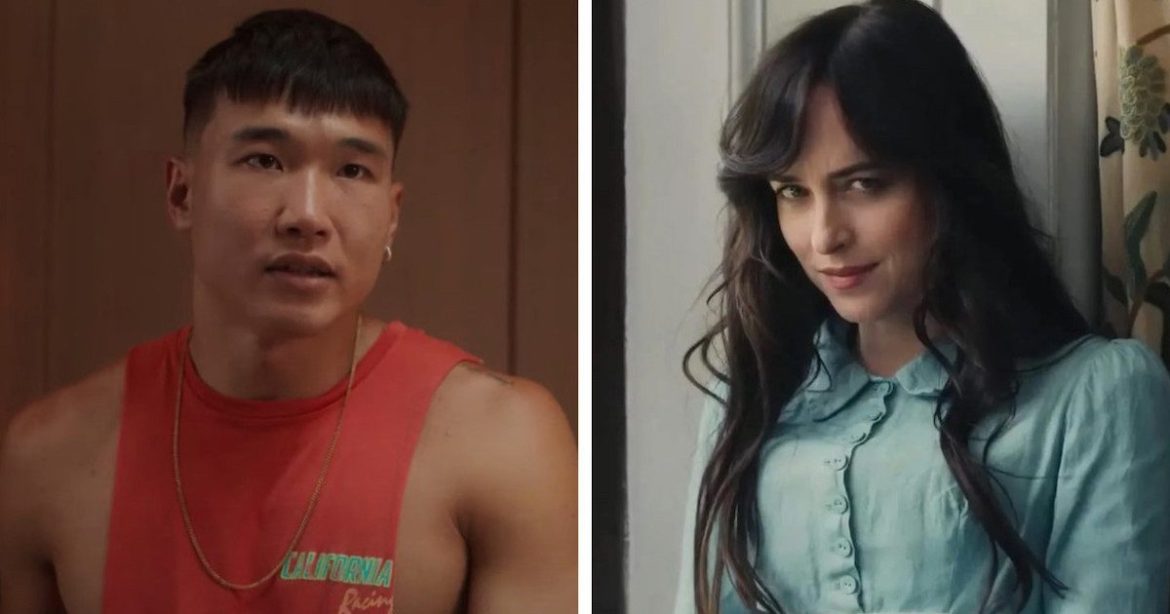 Adapting a beloved novel for the screen or the stage is not as easy as it appears to be. Though the characters and narrative are already set, it is up to the writers to transport the soul of the text and the voice of the original author. Without them, the adaptation rings hollow and empty.

Recently, two different small screen rewrites of Jane Austen’s novels were released. Hulu released Fire Island. It is Pride and Prejudice set among a group of five queer friends who are going on their annual visit to the island off of New York City. Netflix premiered a new version of Persuasion. Eight years before the story starts, Anne Elliot (Dakota Johnson) gave up Frederick Wentworth (Cosmo Jarvis) because he was unacceptable to her aristocratic family. They meet up in the present with a wall of anger, hurt, and unanswered questions between them.

I’ve seen a lot of reworkings over the years and I have developed what I think is a decent idea of what works and what does not work when it comes to adapting a Jane Austen novel.

Does It Remain True to the Source Material?

What Fire Island does well is take what Austen created and transfer it to our time without losing what made it special. Joel Kim Booster, who served as producer, screenwriter, and star, did his job. His Noah (the Lizzy Bennet of the piece) is as sharp-tongued and quick-witted as his female Regency counterpart. Howie (Bowen Yang, playing the equivalent of Jane Bennet) is the romantic. Will (Conrad Ricamora) matches Fitzwilliam Darcy’s silent outside and passionate inside. Charlie (James Scully) is equal to the task of playing a present-day Charles Bingley, complete with the easy smile and puppy dog eyes that are solely trained on Howie.

Persuasion fails because it only touches the surface of the book’s emotional depths. Dakota Johnson, in the lead role, is not Anne Elliot. It’s not her fault, it’s the fault of the screenwriters. This Anne is a rom-com heroine. There is nothing wrong with being a rom-com heroine, but Persuasion is not a rom-com. She likes to drink, has a smart mouth, openly insults her family, and is not afraid of sharing her opinions. In the novel, Anne is quiet, keeps her opinions to herself, and for most of the narrative, lets her family walk all over her. I didn’t mind that she broke the fourth wall. What I found infuriating is that the writers had a perfectly good text to work from and chose to go in another direction.

Does the Tension Hold Throughout the Story?

Regardless of story type, genre, or format, tension is key to holding the audience’s attention. Kim Booster did a brilliant job keeping me on the edge of my seat. Even though I know Pride and Prejudice by heart, I was still questioning if Noah and Will and Howie and Charlie would have this movie’s version of a happy ending. The key is to hold the story question figuratively over the reader’s head and constantly force them to ask themselves if they will get the answer they are hoping for.  The answer for Fire Island is yes. There is just enough slack at certain points, and just enough tightness at other points to keep me holding my breath.

When we meet Anne for the first time she is still reeling from the breakup of her engagement to Captain Wentworth, even though it has been nearly a decade. He too is still hurting and makes not-so-subtle jabs at Anne that definitely hit the mark. Though they both pretend that everything is fine, it’s not difficult to read between the lines. This is the tension is that Austen brilliantly crafted and is overtly missing in this version. By the time we get to the letter, which is the high point of the novel, the overall feeling is deflated. I want to root for them to be together, but I have no reason to.

Whether it is a classic novel or a comic book, one of the most important aspects of any screen/stage reboot is making old fans happy while properly introducing new fans to the work. Fire Island is the perfect initiation for those who know little to nothing about Pride and Prejudice. There is a lot of talk about inclusivity in the Janeite community, both within the fandom and in Austen-related work. I can’t think of a better way to broaden the audience and the image of her novels by creating a modern queer multi-cultural narrative that never strays far from the text.

One of the few upshots of Persuasion is the diverse cast. After the massive success of Bridgerton, producers and executives have started to cast non-white actors in period dramas. While this decision reflects the ignored reality of the Regency/Georgian era, it cannot make up for the overall shortcomings of the narrative. One of my favorite performances was from Henry Golding as Mr. Elliot. Like all Austen villains, Mr. Elliot is handsome, charming, and intelligent. He also has ulterior motives which are not known to either the other characters or the reader until the very end. The problem with this version of the character is that I was almost rooting for him to be with Anne at the end. He also had a happy ending, both of which deviates completely from the original novel.

When I heard about both Fire Island and Persuasion, I was excited to see how the filmmakers would go about recreating two of my favorite books. Fire Island left me with a buzzing feeling that I always get after an adaption was done right. Persuasion, on the other hand, made me feel disappointed and frustrated.

Thank you for reading! What are your thoughts on Fire Island and Persuasion? Comment down below!