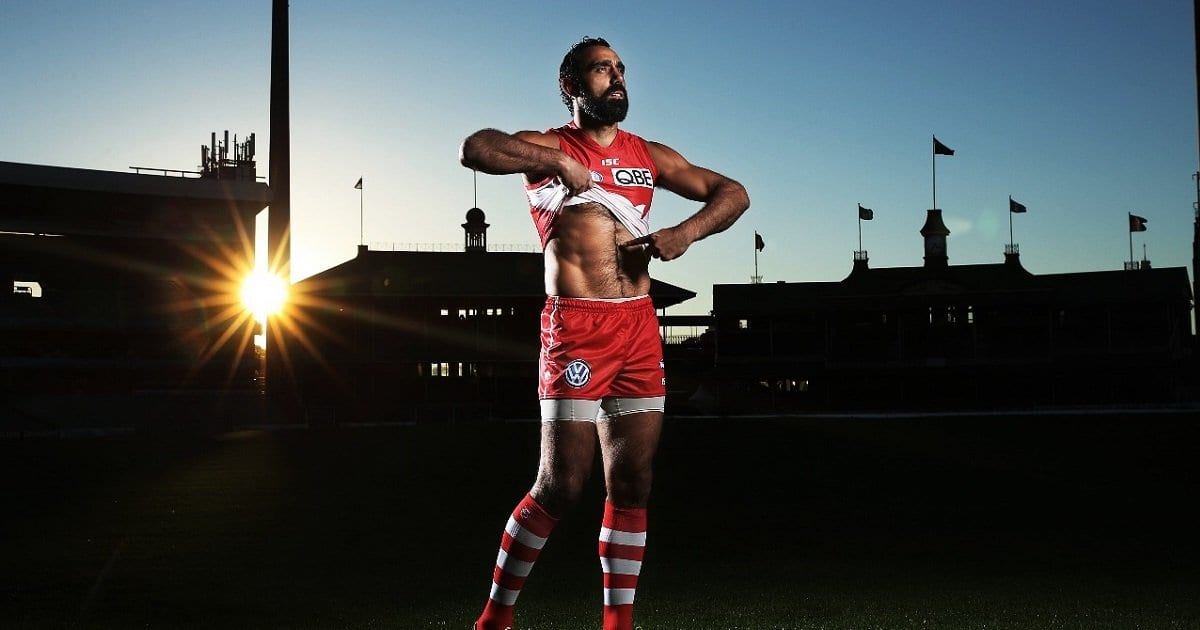 All of these words could be used to describe former Indigenous Australian Footballer, Adam Goodes. A remarkable man whose work both on and off the football field has been an inspiration for many Australians. Goodes boasts an illustrious list of accolades from his playing career at the Sydney Swans; 372 Games (the 2nd most by any Indigenous player and 9th on the all-time games list), 464 Goals, 3-Time Club Best and Fairest, 4-Time All Australian, 2-Time Brownlow Medal Winner, 2-Time Premiership Player. The list goes on. He was an undisputed champion of the game. The footy field was where he thrived and it was the only place where the color of the skin was completely irrelevant.

That was until one fateful night in May 2013, Goodes was racially abused during a match by a young fan of the opposing team. Goodes bravely took a stand against racism, but it sparked an onslaught of public backlash against him, extensive media commentary and widespread debate that divided the nation. For the final years of his playing career, Goodes was mercilessly booed, racially vilified and abused until it forced him into retirement in 2015. He started a conversation Australia needed to have about racism, but we as a nation were not ready to hear the ugly truth and Adam suffered in the aftermath.

Almost half a decade after this ordeal ended, two different documentaries with two very different approaches to Adam’s story are released just months after each other. While covering much of the same content, both films present one of the darkest periods in Australian sports history from very unique perspectives and styles.

The first of the two documentaries premiered at the Sydney Film Festival in June and was subsequently broadcast on Australian free-to-air TV network, Channel 10 the following month to over 589,000 viewers.

Directed by Ian Darling, The Final Quarter is solely comprised of archival footage from the time, showcasing how the media portrayed this racism debacle and how they may or may not have inadvertently perpetuated and escalated the already tense situation that had been created. It serves as a reminder and an opportunity to reconsider what happened and how everything transpired both on the field, in the stands or the media.

As The Final Quarter is composed entirely of archival footage, the film begins with the match where Goodes was first racially abused and ends with him retiring from the sport. In that 3 year window, the film documents how the media, the Australian Football League (AFL) and the Australian public reacted to the Adam Goodes racism row as it unfolded.

Though very narrow and specific in its focus, The Final Quarter is far from a removed, strictly journalistic montage explaining what happened and how. It’s an unembellished recollection of this whole saga and serves as a shocking reminder of how severe the booing, abusing and hateful, racist discourse became in this period. The filmmakers have started an initiative where Australian schools and local sports clubs can receive a free copy of the film for educational purposes, and rightly so. We must remember Adam’s story and that is told to both students and grassroots sports clubs. It’s a stain on Australia’s proud sporting history that we simply cannot forget. 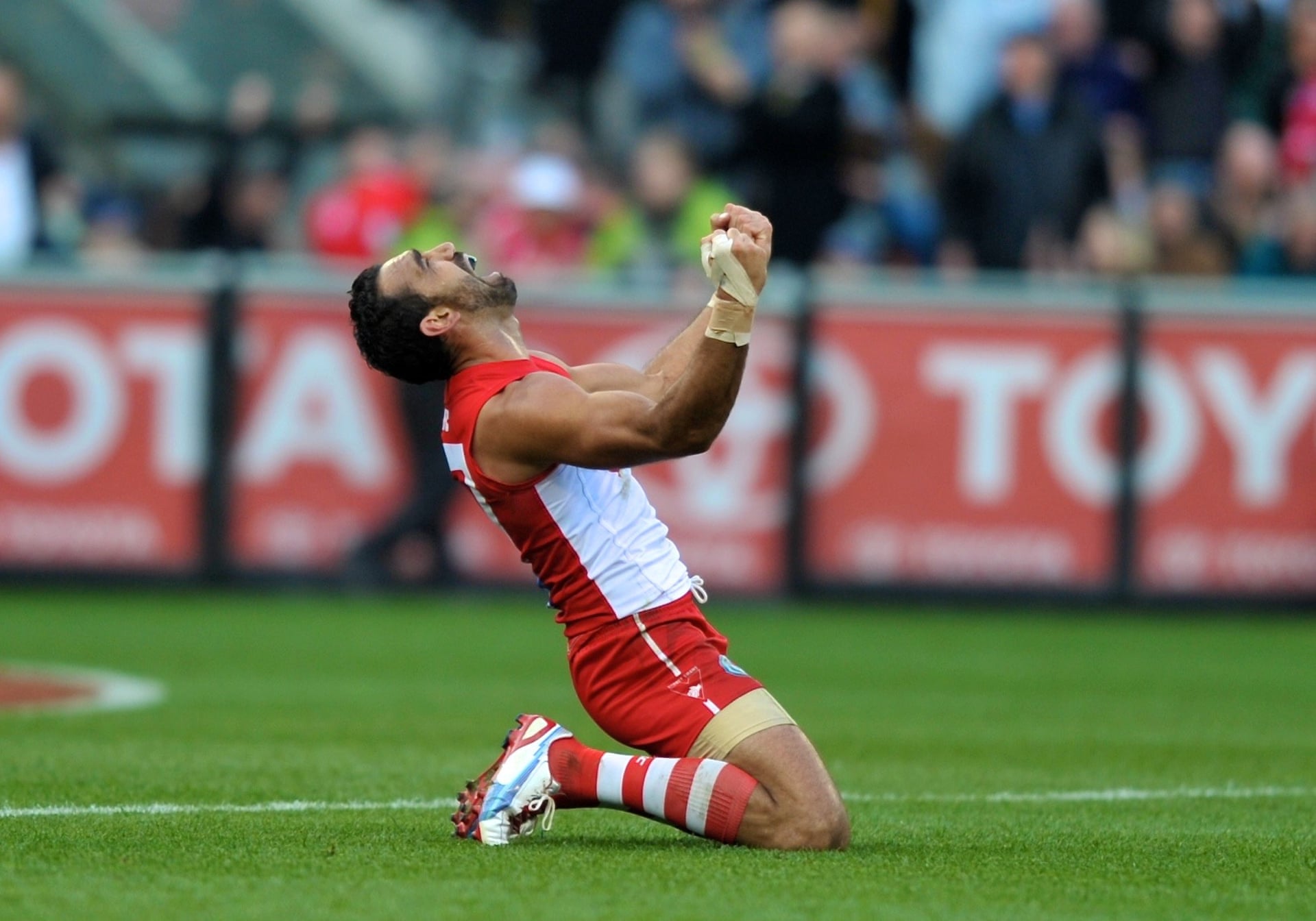 The second documentary made its world premiere as the opening night film of the 2019 Melbourne International Film Festival and was released theatrically around Australia on August 22nd. Of the two films, The Australian Dream is more likely to get international distribution as Australian-born NBA superstar, Ben Simmons is an executive producer.

In terms of form and style, The Australian Dream is much more conventional than The Final Quarter. However, this film has the benefit of Adam Goodes being actively involved in the documentary, being interviewed and reflecting on the events that transpired. Written by Indigenous Australian Journalist Stan Grant, The Australian Dream not only delves deep into Adam’s story but goes further in presenting a rich exploration into Australia’s relationship with racism and the nation’s ability (or in this case, inability) to confront their past.

The Australian Dream has what The Final Quarter highlighted that was something that was desperately needed from the media during the saga but did not present in the film: The Indigenous perspective. Adam grew up knowing very little about his Aboriginal background or what it meant to be Indigenous. It through this experience that he became more in tune with his culture and heritage and made him want to stand up against racism, which as it turned out, many Australians had a problem with.

Not only does the documentary get a deeply emotional and personal reflection from Adam himself, other Indigenous footballers, athletes, and prominent Indigenous Australians are interviewed about the events the film is documenting, whilst also sharing their own lived experiences of racism. Most notably, Australia’s first-ever Indigenous Olympic Gold Medal winner, Nova Peris tells a story where a fellow Australian athlete called her the N-word, not knowing that it was racist. These heartbreaking shared individual experiences underline just how prevalent casual racism is in Australian society and the psychological and emotional toll that has on the Aboriginal people.

Which Film is Better?

The Final Quarter and The Australian Dream are both some of the most powerful and evocative pieces of documentary filmmaking to be released in 2019 and both films tell the Adam Goodes story in ways that are tactful and deeply rooted in empathy and restrained anger for what has happened to Adam. He was very well-spoken, constructive and wanted to unite all Australians through everything he went through, yet all of the booing, vilification, hatred, abuse and overt racism didn’t stop. It got so bad, Goodes did not want to join the motorcade of retired players on Grand Final Day in the year he retired because he knew he would be booed there too.

In terms of which film is better, The Australian Dream edges out The Final Quarter by the slimmest of margins. Mainly because of the archival footage montage style of documentary filmmaking with no new footage or voiceover in The Final Quarter restricted themselves to what they could present. Their focus to show just the three years of the saga at a runtime of just 75 minutes fully encapsulates everything it needed to show and how it happened. A case study of a nation’s attitude towards racism and how that desperately needs to change.

On the other hand, The Australian Dream touches on everything The Final Quarter covers but goes above and beyond in forming a well-rounded film. It is not just about the Adam Goodes saga or racism in sport more generally, but rather an entire country’s relationship with racism from the perspective of those that it has deeply affected. At the longer runtime of 106 minutes, The Australian Dream has a deeper analysis of how the saga came to be and explores so much more than its predecessor. The inclusion and prominence of the ever-important Indigenous voice, especially when both films make a point of the lack of Indigenous figures in the media during this time, certainly makes The Australian Dream a stronger film.

While I believe one is slightly better than the other, both The Australian Dream and The Final Quarter are excellent documentaries that are both timely wake-up calls that all Australians need to see. It is an event that all Australians lived through, but one we now must learn from in retrospect and work towards reconciliation. Both films would also be eye-opening experiences for an international audience. The Adam Goodes story is one that will be shocking for most international audiences, but may also make them consider how their country views racism and what they can do to stand up against it and be a catalyst for change.

The Final Quarter Grade: A

The Australian Dream Grade: A+

For more on this topic, I recorded an episode of Another Bloody Movie Podcast with my good mate and mad football fan, Matthew Corigliano to break down in further and more specific detail on how both films depict the events of the Adam Goodes racism saga. Click the link below to listen to that episode on Soundcloud.

Thank you for reading! What are your thoughts on The Final Quarter and The Australian Dream? Comment down below!

[…] this wholesome and silly little doodle was co-opted and appropriated into an alt-right mascot of white supremacy, resulting in Pepe being labeled as an official hate symbol by the Anti-Defamation League. In an […]