’47 Meters Down: Uncaged’ Is A Needless Sequel 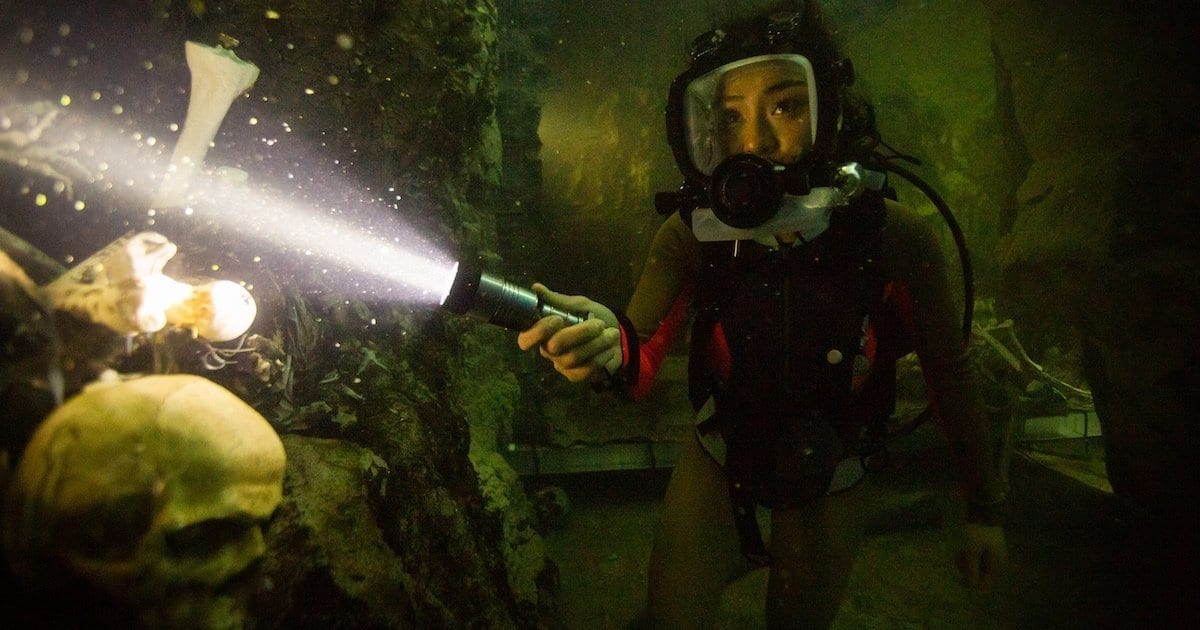 Maybe it’s ignorance or unbridled optimism for things to be different, but it still surprises me any time Hollywood creates another unnecessary sequel. This surprise comes at the hands of a well-received and successful film (for its size) from 2017, 47 Meters Down. The shark attack horror/thriller was a pleasant surprise from that year. A small film, with not much marketing or aspirations that is the best possible version of what it is. 47 Meters Down expands on a trope from the genre (being attacked in a shark cage) and drags it out to its worst possible conclusion — in a good way. It’s a solid film that is equally thrilling as it is fun, and most importantly it’s a good time at the movies. A perfect one-off is what this film should’ve been, instead, 2019 brings about the sequel 47 Meters Down: Uncaged that feels like a cheap knock off in every single way.

The following review is spoiler-free.

Naturally, the entrance to the city is blocked off, so the girls are forced to navigate the tunnels underneath. With their air supply running low and the number of sharks multiplying, the tunnels become more claustrophobic and everything becomes more terrifying. (Theoretically.)

These Girls are a Tough Hang

A movie like 47 Meters Down: Uncaged only really needs a few things for it to work. One of those things is an interesting lead or main group of characters. They don’t have to be well developed or thought-out characters, just entertaining. This is a flaw that Uncaged never has a chance to overcome because these girls are a tough hang. I can’t tell you anything about them, as a group they lack any believable chemistry, and worst of all, they’re pretty annoying. There is about a five-minute stretch when they get to the water hole where they are just screaming as they jump in the water to swim. Man is it frustrating to watch.

Not at any point in the entire movie do any of them say something interesting or funny. To further exacerbate this problem, the men in the movie are even worse. The two young men are simply there to die as they do enough yelling of their own, and their father isn’t anything more than a false sense of hope. Horror movies like this are far more fun when the characters are entertaining and because that’s not the case for any of these characters, 47 Meters Down: Uncaged never stood a chance.

All of these movies have a character (or several characters) that have unrealistic jobs or titles. Generally, I roll my eyes at the young, smart-mouthed scientist and wait for him to be eaten by something without really thinking about it. 47 Meters Down: Uncaged doesn’t have much of this, and much to my surprise, the movie suffers from it. I teach high school students and I can tell you that they don’t know much about ancient cultures and they for damn sure can’t explain the specifics of ancient Mayan culture. They also seem to make diving look surprisingly easy for a group of kids that only has one diver among them. Worst of all is Grant (John Corbett), who is positioned as an expert, but I don’t really know what he does and he doesn’t seem that good at it. There is a reason movies like this go out of their way to have a doctor, scientist, or some sort of specialist. It’s a lot easier to believe the nonsense they say if they have a title and can divulge some kind of exposition dump that doesn’t feel wholly contrived.

The Girls aren’t the Only Tough Hang

Inherent in a movie like 47 Meters Down: Uncaged is the suspension of disbelief that one needs to enjoy it. Unfortunately, when the movie doesn’t work it becomes increasingly difficult to suspend that disbelief. Uncaged suffers from this problem and it’s mostly self-inflicted. The longer the movie goes on the more questions you start to ask yourself. That takes the fun out of the whole experience. Why are these girls down there? Why are people working down there by themselves and how do the sharks terrorize these people if they can’t see? As big as those questions are, it’s the smaller nonsensical questions that really bring the movie down. The random current in the middle of a maze of tunnels that doesn’t make geographical sense is certainly a problem — as is literally every decision a person makes. I’ll suspend my disbelief if I’m having fun, but this movie isn’t fun so I’m left with time to ask questions, none of which have answers that make any sense.

To its credit, 47 Meters Down: Uncaged is very short. Ninety minutes is the perfect length for a movie like this…or at least it should be. Uncaged just doesn’t end. The final sequence is far less thrilling because by that point there were already too many false finishes. I admire a movie that builds tension in its final moments but that isn’t the case here. The relief I feel at the end of this film isn’t from the tension, it’s because it’s finally over. Removing a few of the false finishes and settle on a true ending could make the movie much better. The last thing any of us want in a 90-minute movie is to feel as if it’s dragging on.

I Do Love the Tension

For the many faults this movie has, there are some genuinely tense moments that are quite effective. As a sucker for good tension, I’m always pleased when a movie can put me on the edge of my seat. While this movie doesn’t get there through good writing, it does execute some solid ideas. The red flashing lights as the girls go back into the cave is incredibly thrilling. This sequence brings a terrifying scenario to life and elevates it with an idea that is unforgettable. Seeing this as a ceiling for this movie it is disappointing that it only reaches a few times. But anyone that loves the tension this genre can bring will find some genuinely great moments in Uncaged.

There isn’t much to like about 47 Meters Down: Uncaged but it may work for some more than others. I find it to be a poor attempt at a genre that delivers pretty consistently. Better writing makes every movie better but a few more passes at this script would have been a game-changer. I could never turn my brain off enough to enjoy it but if you can, Uncaged can be a good time. I suggest skipping this movie in favor of the original. If you’ve already seen that and you’re looking for something similar to this check out Crawl. That is everything this movie wants to be and should be.

Thank you for reading! What are your thoughts on 47 Meters Down: Uncaged? Comment down below!

Unmasking ‘Us’: What Does it All Mean?