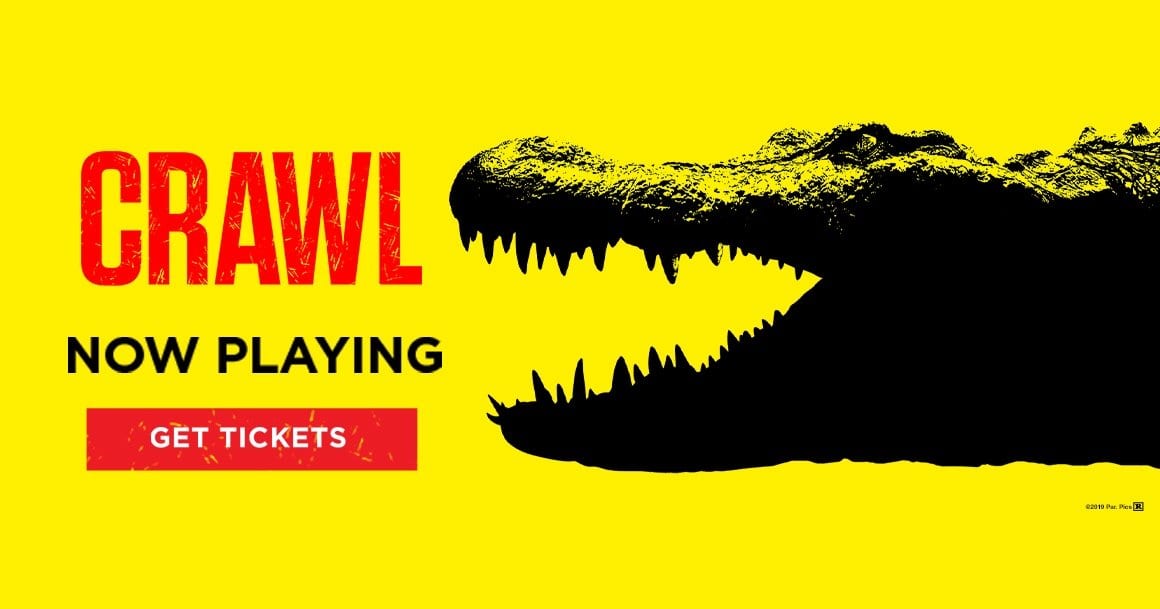 Listen, I enjoy capital “C” Cinema. But sometimes, I need a movie where characters are ripped to shreds by dangerous animals in a bout of extreme exploitation filmmaking. Veteran director Alexandre Aja is no stranger to such a desire, as he has dabbled in plenty of deranged and royally messed up films like High Tension and the 2006 remake of The Hills Have Eyes, just to name a few. So when I saw that Aja was directing an alligator attack movie, I knew I was going to get two things: alligators dismembering people and plenty of blood. Crawl offers both those things in spades, elevating the final product to wonderful, if familiar B-movie heights.

After swim practice as a member of the Florida Gators swim team — I see what you did there, movie — Haley (Scodelario) gets a call from her sister who says she hasn’t heard from their dad (Pepper), and an impending category five hurricane threatens to destroy engulf his area. Though Haley is estranged from her father, she reluctantly drives down to him in an attempt to corral him before the worst of the storm comes.

Eventually, Haley tracks down her dad in the crawl space of a house that he’s been working on as a contractor, but he’s been bitten by something and knocked unconscious. Confused, Haley is shocked to learn that an alligator has made its way through a drain pipe into the crawl space.

Once Haley’s dad regains consciousness, the two must figure out a way to escape the gator’s clutches and get to safety before the water from the hurricane envelops the crawl space.

Don’t Breathe was a bit of a game changer for thrillers. Obviously, many confined, claustrophobic thrillers came before 2016 when Don’t Breathe came to theaters, but the film signaled a possible inefficiency in the marketplace for producers to exploit. The film went on to gross about $157 million on a budget of less than $10 million, one of the most profitable movies of that year by return on investment. It became clear: create a high-concept, somewhat lurid premise with capable actors on a small scale and you’ll probably get your money back without breaking a sweat.

Not coincidentally, the second half of 2016 and beyond is when we saw Blumhouse mold into the true powerhouse that it is today. The low-budget horror/thriller is arguably the safest venture in movie-making at the moment — outside of making a Marvel movie. Now Crawl is hoping to coast off of that success, plastering producer Sam Raimi’s name along with Don’t Breathe all over its marketing material. It is a copycat industry, after all. 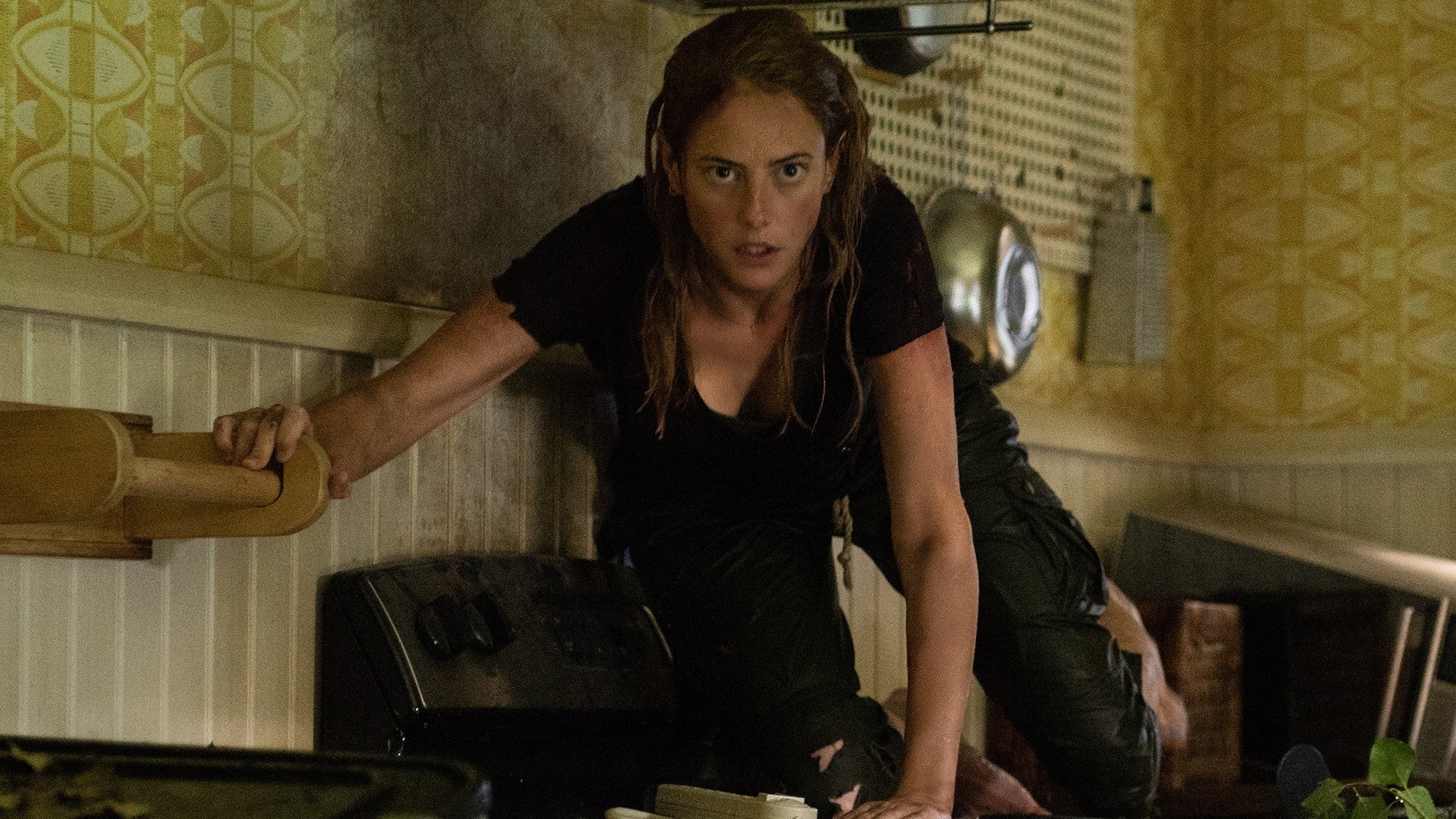 “Look! Lunch!” – one of the gators (probably). Image via IGN

Crawl is the epitome of a four-star three-star movie, a movie that is perfect for what it is but never reaches the cinematic heights of other movies that have higher aspirations or possibly radical methods. Think of a gymnast that consistently aces a low difficulty routine — they always do their job, but they probably won’t come away with the gold medal. Crawl sucked you in for the alligator violence, and you get just that.

Alexandre Aja has a twisted sense of humor in his films, so if you get introduced to a character outside of Scodelario or Pepper, you probably know how it’s going to end for them. He likes to juxtapose horrific violence with a little wink, letting the audience know that he understands exactly what kind of movie he is making. With that style, he creates some wonderful, small-scale set pieces that ratchet up the tension while satisfying that sadistic side of us all that likes to see people mauled for no reason other than bad luck or timing. Aja creates a world in which humans are almost destined to meet their bloody demise, consistently playing with audience expectations as the environment gets more difficult for the characters. There’s a constant threat of characters turning into a snack, and Aja is smart enough to indulge us in gator violence wish fulfillment while still keeping the integrity of the movie’s inner workings intact.

GET IN MY BELLY! Image via Fox 13 News

The Beauty of a Less Than 90-Minute Film

The art of the short movie is slowly fading as filmmakers feel the need to eventize their projects. It works occasionally, but more often than not the result is a movie with serious bloat. Crawl is such a treat in that never comes close to overstaying its welcome. It’s hyper-aware of the fact that extra flourishes or plot threads aren’t always smart moves. The focus remains entirely on Scodelario and Pepper’s characters as they continue to problem solve and escape the clutches of a particularly cantankerous reptile.

As a result, the tension never dissipates; Crawl is constantly shifting from one beat to the next. And while it takes time to catch its own breath, that nervous energy is always constant.

Shorter movies have an inherent feeling of a ticking clock. There’s no time to relax!

A Journey Through Crawl Via Memes

Crawl is a silly movie, so why not counter that goofiness with some memes? (I have that kind of power here at MovieBabble.)

You would scoff at someone who went into Crawl hoping for an intellectual exercise. In fact, you might have a reaction like this one: 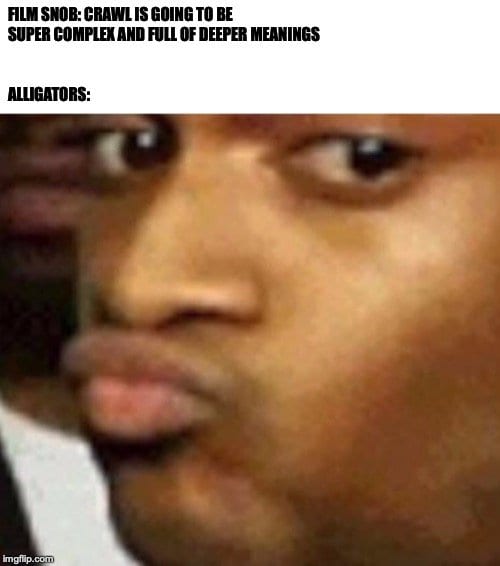 We all know why we come to see a movie like Crawl. I know it. You know it. The people know it. Paramount knows it. This isn’t the space for some deep, philosophical lecture on our place in the food chain. It’s possible but unlikely given how movies are made in 2019. In most cases, people just want to see some alligator carnage.

It’s that kind of thinking that inherently hurts creature features. We don’t expect a ton from these movies, so they often don’t try to achieve a ton. As such, Crawl always gets into problems when it turns to its humans for emotional depth: 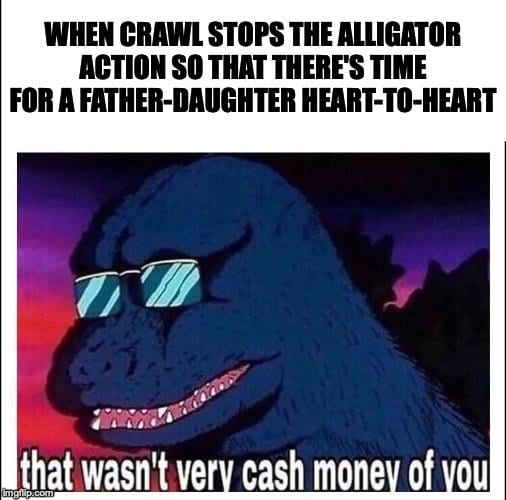 More often than not, creature features need that personal touch in order to function, but they often aren’t allotted the space for real emotion to take hold. The father-daughter dynamics at play in Crawl are forced and the least interesting piece of the story. There’s potential for more, but Crawl is too concerned with only meeting the standards of the genre, not exceeded them. These moments feel expendable. 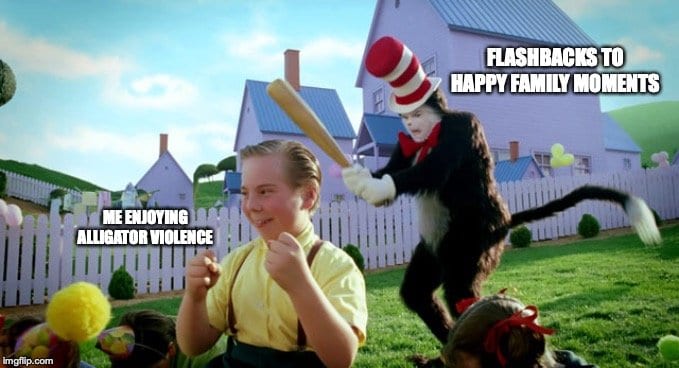 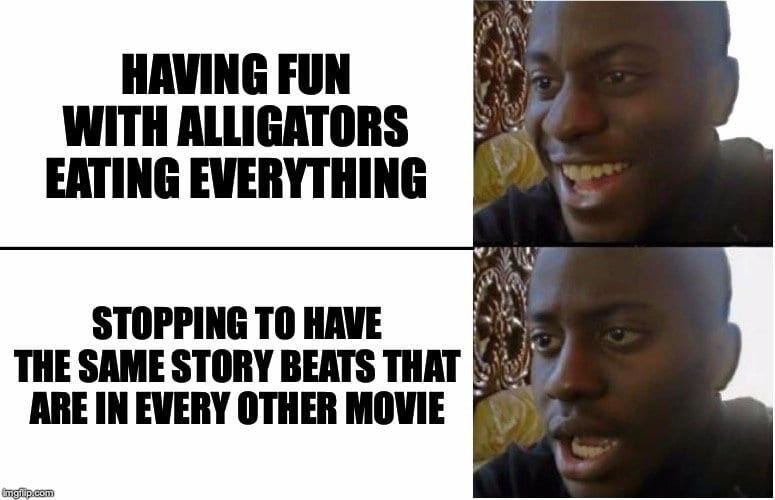 The father-daughter strife and other familiar beats keep Crawl from obtaining excellence. Though I joke about hoping that everyone dies a bloody, reptile-related death or playfully pat it on the head for its smaller aspirations, Crawl is a perfectly reasonable source of entertainment, one that has every right to be as lauded and loved as high-minded movies like High Life by my colleagues and casual moviegoers alike. It serves a different purpose; it’s a means to ignite a feeling of pure adrenaline. There’s a lane for movies like Crawl to become iconic — ever hear of a little movie called Jaws? — and it’s slightly disappointing to see Crawl never strive to inject inventiveness into its parts.

Oh, and here’s one more meme for good measure: 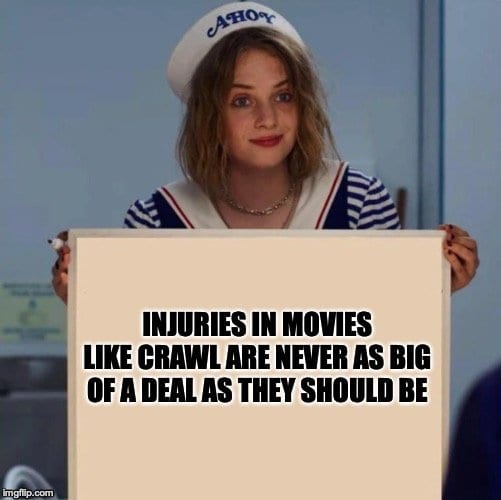 I’ll steal from myself on this one:

My favorite part of @TheCrawlMovie was when gators ate people pic.twitter.com/KvES0GxcMc

You’ll go for the alligators, and those alligators do just fine in their role as the ultimate aggressors in Crawl. Connections can be made to the ever-changing climate, but Crawl never has that kind of ambition; it wants to thrill, and you’ll get your thrills. It’s a workmanlike movie that always does just enough to get the thumbs up. That’s it! 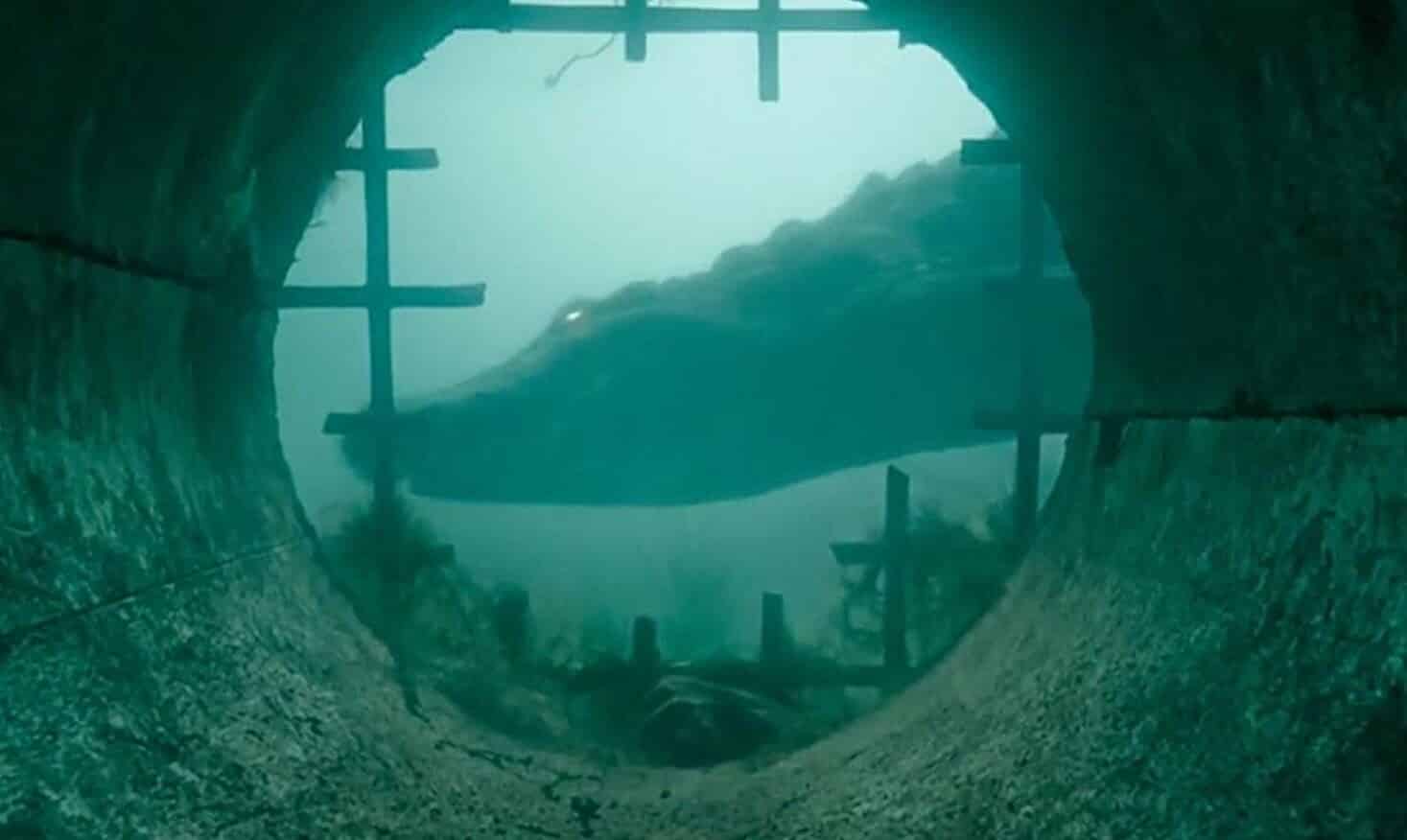 Looking for a snack…Image via ScreenGeek

Thank you for reading! What are your thoughts on Crawl? Comment down below!

[…] all that makes The Pool is a high concept piece, it isn’t a serial-eater beastie movie like Crawl (as fun as that was). Ms. Bitey is a realistic size, there’s only one of her and being on […]

[…] a contained horror/thriller, you can do much worse than The Platform, but as a commentary, you can do a lot better. The sort of […]