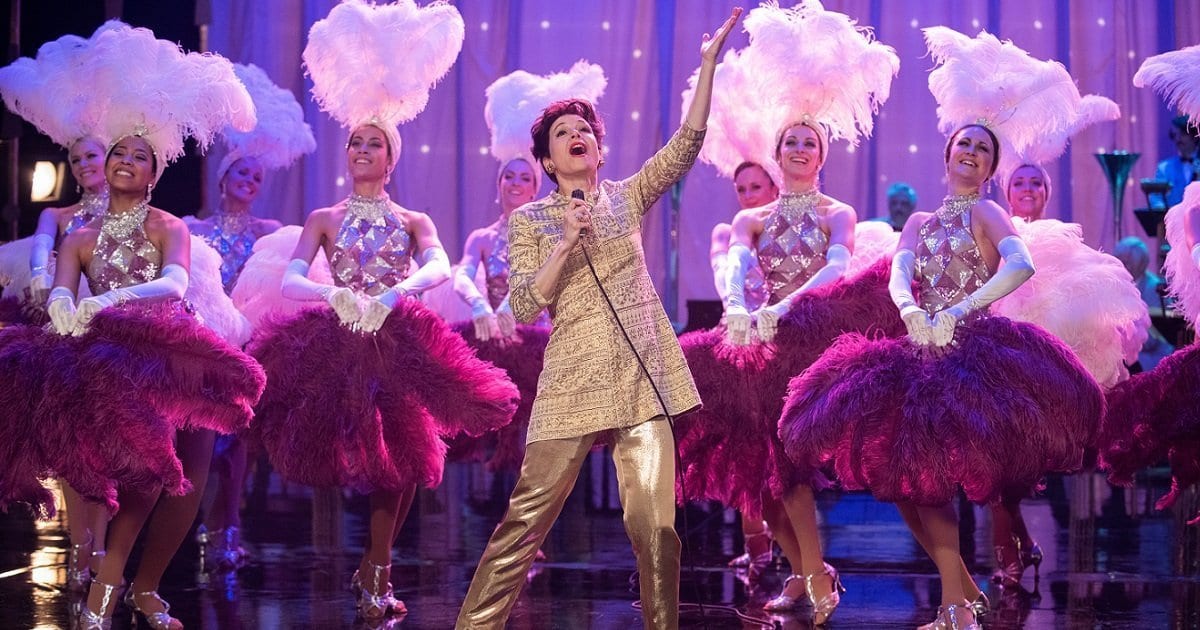 Judy Garland was a performer with a capital P. She is an icon above icons, a movie star in every sense of the word. She was also a human being whose life off camera was far from perfect. Judy captures this aspect in detail, chronicling the end of her career and the poor habits that developed from years of abuse and tragedy.

Written By: Tom Edge (screenplay by) and Peter Quilter (based on the stageplay by)

Judy (based on the stage play End of the Rainbow by Peter Quilter), takes place in the late 1960s. Judy Garland (Zellweger) has seen better days, both in the professional sense and personal sense. Riddled by debt, a professional reputation that is in tatters and addicted to pills, nothing is going right.

The only gigs she can get are small night clubs. Her ex-husband, Sidney Luft (Rufus Sewell) takes custody of their two children. Then an offer appears to sing for five weeks at the Talk of the Town in London. It is the opportunity that she desperately needs. In London, Rosalyn Wilders (Jessie Buckley) is assigned to Judy as her assistant/handler. Judy also finds love again and marries Mickey Deans (Finn Wittrock). But even though her love life and professional life seem to be getting back on track, the demons of her past are never far from her present.

The film flashes back from the present to the past when a teenage Judy Garland (Darci Shaw) was controlled, verbally abused and forced to take drugs by the studio while making her iconic films in the late 1930s and early 1940s, underlining the troubles that come with fame.

Zellweger and Judy are Oscar Bait

The Academy loves nothing more than a well-done biopic. Especially when the subject is as beloved and respected as Judy Garland. Director Rupert Goold and screenwriter Tom Edge could have created a by-the-book biopic with the standard plot points and a dry, academic style narrative. Instead, they created a film that has shades of light and dark and reveals the real person behind the Hollywood glamour shot.

Most good actors disappear into their roles. Zellweger does more than disappear into the role, her physical and emotional transformation into Judy Garland is nothing short of breathtaking. One of the things that impressed me was her singing. We all know that she can sing. Zellweger was nominated for an Oscar for her role as Roxie Hart in the 2002 adaptation of the musical Chicago. She also sang in the 1995 film Empire Records. However, singing in your own key is different than singing in another key. In singing closer to Garland’s key than her own, Zellweger proves once more that she absolutely deserves any nominations or awards that come her way.

Every so often, an actor or actress comes along who leaves an imprint on the audience. For me, one of these performers is Jessie Buckley. This rising star from Ireland has proven herself to be an acting force to be reckoned with. My favorite roles of hers are War & Peace, (2016) are Beast (2017) and Wild Rose (2019). In War & Peace, she played Princess Maria Nikolaevna Bolkonskaya, a young aristocrat who is devoted to her faith and her bullying father. In Beast, she played a woman who is torn between her rebel boyfriend and her conventional family. In Wild Rose, she played a former convict who wants to be a country music star, but is bound to familial responsibilities.

All three roles showed that Buckley has the talent, the drive and the range to hopefully have a life long career as a performer. She continues her great work in Judy with a very memorable turn as Garland’s no-nonsense handler.

An Exploration of the LGBTQ’s Community Love of Judy Garland

One of the aspects of Judy Garland’s iconic status is that of a hero to the LGBTQ community. For some decades, there has been an understanding that Judy Garland is one of those performers who members of the LGBTQ community gravitate to. In Judy, this aspect of her image is explored in a manner that feels both respectful and right for the narrative. It is her will and struggle to survive and the desire to be herself in a world that expects her to live up to her Hollywood image. It is those qualities that I think resonates with a community that for many years, was forced to hide for both protection and acceptance.

On the surface, it’s easy to put a biopic together, especially that of a well-known person. The material is already there, it is just a matter of pulling together the creative team and casting the right actors. However, there is more to a biopic than that. The film must do more than simply tell the story of the person. It must reveal the real person behind the cultivated image, showing the shades of grey and the personal side of the icon. Judy does more than that.

It brings to life an icon in a way that reveals the humanity underneath the Hollywood image that is Judy Garland. The film also reveals that Hollywood can be a cold place. Especially for female performers who must choose between conforming to the ideas of their male bosses and working or not working because they will not change who they are simply to earn a paycheck.

If I were a betting woman, I would put money on Renée Zellweger earning both a Golden Globe and an Oscar for Best Actress. She absolutely deserves it.

Thank you for reading! What are your thoughts on Judy? Comment down below!

It’s nice to see Jessie Buckley getting more and more film roles as I was familiar with her since her days on I’d Do Anything.

This one goes on the must-see list. Thanks for the review!

‘El Camino’ is an Outstanding and Satisfying Breaking...