‘Honey Boy’ Teaches Us Something New About Parenthood 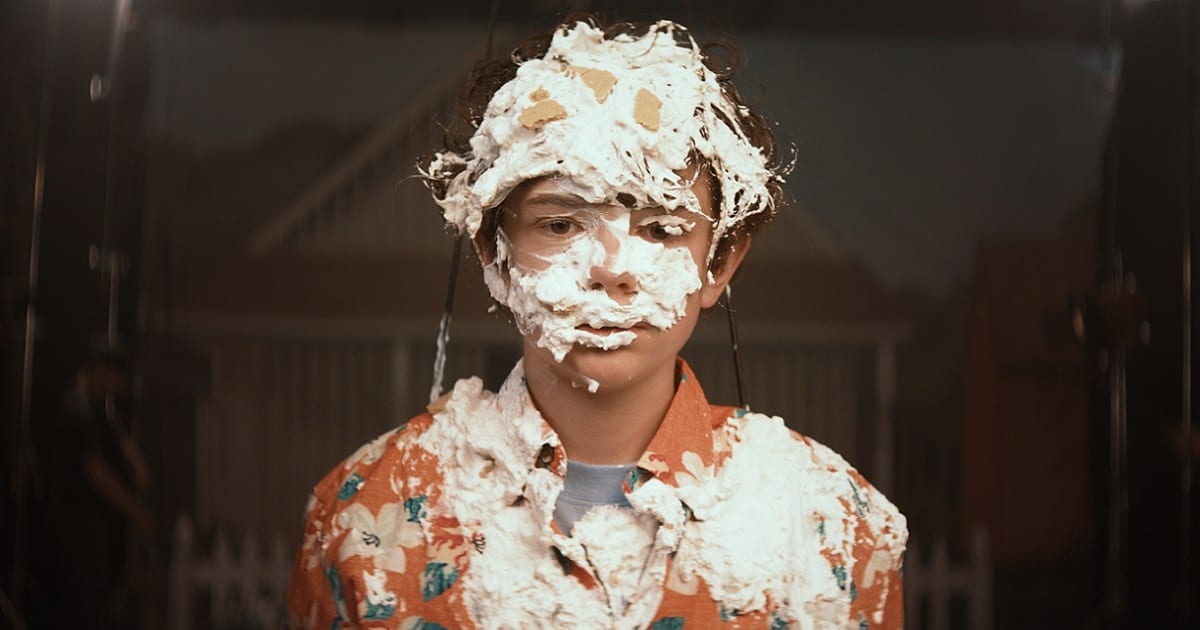 Honey Boy tells the story of a young actor, Otis (Noah Jupe), and his unhinged relationship with his father James (Shia LaBeouf). The film alternates between two periods: 1995 and 2005. Very early on, we find out his older self (Lucas Hedges) isn’t in a good state of mind. He attends a program that helps him with his psychological problems such as anger and PTSD, just to name a few. Meanwhile, in the 90s, we are shown his childhood as a child performer, back when he lived with his dad. This is the main section of the story and explains the dark place our main character finds himself in.

Alternating between these two periods of Otis’ life makes for a strong and distinct narrative. Honey Boy ignores the traditional conventions of storytelling. There is no concrete three-act structure, and there isn’t necessarily a main objective for the lead character to conquer. Honey Boy is more focused on Otis. Think of something like Moonlight, but even then the comparison isn’t exactly perfect. Chiron’s desires (or the suffocation of them) in Moonlight are at the forefront. In Honey Boy, the desires of the father and son become secondary in the grand scheme of things. This especially holds true when you take the adult part of this story into consideration.

Honey Boy has two main perspectives. The first one is, of course, Otis, who, from his work as a child actor, is the main source of income for the family. His father — the second perspective — is a convict. Finding a job for him is much more difficult which is why he ends up working for his son as his manager of sorts. James’ predicament makes it impossible for him to act as the provider for the family, intensifying the strife between Otis and him.

As a result, Otis’ childhood isn’t ideal as he wants and needs love, appreciation, and a responsible figure looking over him. James is trying to be there for his son but is damaged by his complexes and scarred by his failures. Some of the terrible things he did in the past are why Otis struggles to find joy in childhood. This creates a severe conflict between the two; they each have different views on how the relationship should look.

For many, the obvious culprit in this situation would be James. He’s responsible for his past actions, right? Children are often perceived as innocent across all media. Their shortcomings are often justified since they don’t know better. Honey Boy responds to that notion with a confident, “they do know better.” A child can tell right from wrong, and they’re capable of seeing what kind of effect their actions have on others. A 12-year-old can certainly see they’ve hurt someone or made them feel weak or foolish. This is where LaBeouf as the screenwriter shares an important idea: both the child and the parent should be held accountable.

It might be a lot to take in at first. One might even perceive it as victim-blaming — it’s even worse when the victim is an abused child. But the dual culpability is the sad truth of this unfortunate relationship. Otis contributes to the further downfall of his father. He wants his father’s affection, but at the same time, finds replacements for him; then, Otis proceeds to call him names and degrade him. Many people would understandably stress that it should be the adult who should be the first one to show signs of personal growth. Yet thanks to the retrospective quality baked into the movie, we can tell Otis blames himself as much as his dad. He’s aware things would be different if he were kinder.

We can attribute this guilt to Shia LaBeouf himself as he’s also the screenwriter of Honey Boy. This project is personal to him; it’s essentially inspired by his life. That’s why there’s something truly honest about all of it. If LaBeouf wanted, he could’ve made his father into a personification of evil. He didn’t because this project was always about wanting to make peace. Moreover, I wouldn’t imagine this movie working without Alma Har’el at the director’s chair. The structure of Honey Boy is easy to mess up. If it was handled any differently, chances are it may have undermined a lot of the dramatic weight since it’s the thematic core of Honey Boy that’s difficult to accept.

A lot of movies that focus more on character than plot tend to fall into the trap of a monotonous and overdrawn character study. Honey Boy is less so a study and more so a journey to understanding these two. It’s something far more compelling that widens your perception of parenthood and the obligations a child can have to a healthy version of it.

Shia LaBeouf playing his father is quite memorable, but the one who steals the spotlight is none other than Noah Jupe as young Otis. Jupe conveys so much of the honesty and raw emotion. I imagine director Alma Har’el being positively thrilled after each take. One second he can play it subtly; the next, he can blow up like a brat. You obviously sympathize with the kid; his poor living conditions aren’t his fault — some of his insecurities aren’t either. You understand him as much as you disapprove of the hurtful attempts made to escape from his living situation.

I would be lying, however, if I didn’t mention that I felt anxious watching Noah Jupe in many of Honey Boy‘s harrowing scenes. My hope is none of the things he did for the film will end up manifesting into real-life issues. Hopefully, everything that went into making this film wasn’t too much for the child actor to handle. I still don’t want to undervalue his commitment which deserves plenty of praise, however. Most notably in the climax, where he and Shia LaBeouf kill it. The two actors play off of the things we’ve come to learn about their characters for an extraordinarily intense argument (and there are many “intense” arguments in Honey Boy, so that’s saying something).

The movie twists expectations of the parent-son relationship, and if Shia himself can learn to make peace with the one who hurt him, maybe so can we.

Thank you for reading! What are your thoughts on Honey Boy? Comment down below!

[…] and the films themselves take on deeper meanings than what’s on the page. I recall watching Honey Boy last year, in which Shia LaBeouf expressed all his demons and past traumas in an intensely personal […]