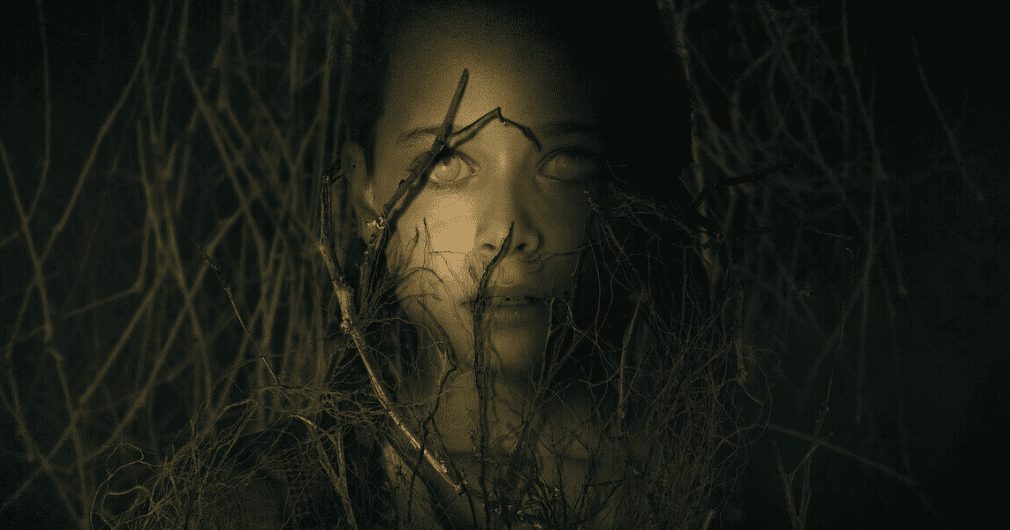 Dario Argento. Lamberto Bava. Lucio Fulci. We cannot deny it: the Italians have some big names when it comes to horror movies. And that is exactly the reason why I eagerly sat down to watch The Binding. That, and the fact that Halloween is around the corner. But if debut director Domenico Emanuele de Feudis wants to become as good as the directors I have just named, he has to step up his game. A lot.

Yet, The Binding is off to a good start. We find ourselves in what looks to be a dimly lit cave or catacomb. There is a lot of blood-curdling screaming in the background. Some people are getting ready for a ritual. Slowly, the camera moves to the spot where the screaming comes from. A woman in a white gown is being held down and suddenly, one of the bystanders holds up a knife and cuts the young woman in the back. Well, the atmosphere is set, and it’s intriguing!

Then, text appears on a black background. It explains the title and links it to superstition in the south of Italy. Although the text isn’t particularly long, it gives away too much of what is about to follow. Much of the suspense is already gone. Besides, it’s even unnecessary, since one of the main characters later explains the same superstitious belief in detail. And not once, but twice.

Cut to modern-day Italy. Emma (Mia Maestro) is on her way to meet her fiance’s mother. It’s obvious that she is anxious. She knows how important her mother-in-law is to her partner. Moreover, Emma has a young daughter Sofia from a previous relationship, something that will be frowned upon. Francesco reassures her that everything will be okay and indeed, her future mother-in-law welcomes both her and her daughter cordially. But things soon seem to be off. On the balcony of her daughter’s bedroom, a crow picks at the body of another dead bird. Emma sees the mother of her fiance handing over a strange potion. And before dinner, everybody murmurs a strange prayer.

The importance of potions, curses, and other forms of superstition becomes even clearer during the night when Sofia gets bitten by a spider. Emma begrudgingly allows her mother-in-law to apply one of her concoctions but eventually takes her daughter to see a doctor. Moreover, she is done with Francesco’s mother and wants to return home with Sofia. But then the condition of her daughter gets worse.

Let’s start with a positive. I have no complaints whatsoever about the production design. The Blinding oozes a brooding, ominous atmosphere from the very start. Even during the day, there seems to be darkness in bright places. There is a field with sick olive-trees and twigs with human hair. Things get even creepier when we begin to become aware of a strange bond between Francesco’s mother and her maid, and a creepy shadow person or ghost that lingers on the periphery. Moreover, there is some fantastic acting, especially by the two women who play Emma and her fiance’s mother. The most remarkable is Giulia Patrignani, the young girl who plays Sofia; it must be quite a challenge to play a character pursued by some curse at such a tender age.

It’s a pity that The Binding is completely let down by the screenplay, especially in the dialogue-heavy scenes, which are uninspired or even ridiculous. There are also through lines where The Binding doesn’t make any sense. From the beginning, various characters state that Francesco has a strong bond with his mother. Yet, we hardly see them interact with each other, and when they do, they hardly utter a word. In other words, Francesco behaves indifferently towards his mother and hardly as the doting son. On the other hand, in the beginning, Emma is clearly a very rational and calm woman who distances herself quickly from all the superstition and the like. Yet, in the second half of the movie, she has turned into a hardcore believer and behaves as hysterically as her mother-in-law and her companion.

A creepy atmosphere does not make a good horror movie. Because of the many clichés and the stifled dialogue, the movie largely feels pretty dull. The Binding misses tension. It doesn’t help that the jump scares are predictable. The Blinding is hardly original, yet it in the hands of a very good writer, it could have been. Remember Midsommar? Ari Aster’s film is based entirely on superstition and strange rituals, and is yet so powerful to the point it has become one of the best horror movies of the last decade. The Binding is quite the opposite.

It’s a good attempt, but that’s about it. The strong acting and production design cannot save The Binding because of the faulty and weak writing. It seems that Domenico Emanuele de Feudis and Daniele Cosci were completely overwhelmed by the story and didn’t know how to handle it, which makes The Binding a big missed opportunity. It’s only to be watched if you have already finished all the good horror movies on Netflix.

Thanks for reading! What are your thoughts on The Binding? Comment down below!