‘Gretel & Hansel’ or: A Sugar-Free Version of ‘The Witch’ 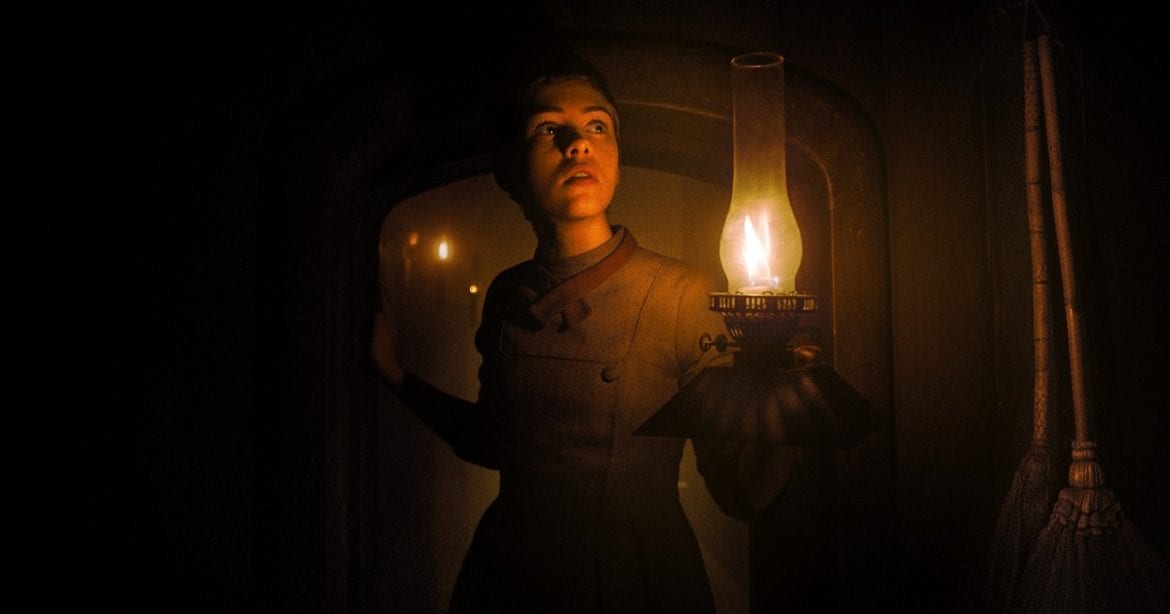 Oz Perkins is a talented filmmaker. His previous directorial outings range from good (I Am The Pretty Thing That Lives in the House) to great (The Blackcoat’s Daughter). When I heard he was making a horror adaptation of the classic fairy tale Hansel & Gretel, it was immediately a film that was on my radar. However, when I heard the film occupied a release date in the cinematic dumping grounds of January and had received a PG-13 rating, I shifted from being excited to a very mild cautiously optimistic. Despite my worries, I am happy to report that this film is much better than it’s January release date would imply. I would even go as far as to say, if it had not made some major mistakes that likely involve studio interference, it could have been a great horror film. Instead, we have a pretty good one.

Sophia Lillis (of It fame) plays Gretel who alongside her brother Hansel (Samuel Leakey) are desperately in search of work to provide themselves with basic necessities, namely: food and shelter. After an early run-in with a character named “The Hunter” (Charles Babalola), Gretel and Hansel decide to make the trek through the mysterious woods in search of a better life. If you are familiar with the fairytale, you have an idea where things are headed, however…

The easiest aspect of this film to compliment is how visually striking it is. This film looks incredible. My only complaint in this category is very early on in the film there are some handheld shots that don’t look great and feel out of place with the often static visuals of the rest of the film. But this is a very minor complaint because the rest of the film looks so excellent. Some shots look like they were pulled out of an illustrated fairytale book of this tale, particularly the early scenes when the siblings venture into the woods.

Another incredibly visually appealing aspect is the exclusively fantastic production design. I’m beginning to learn about myself that a creepy angular building creates a stir of menace within me, and this film has a pretty great, creepy angular house that gave me the chills each time it occupied the frame. The interior designs of the locations are also great. The way things are lit really helps build tension in a lot of night scenes within the house. Even some day scenes as well. 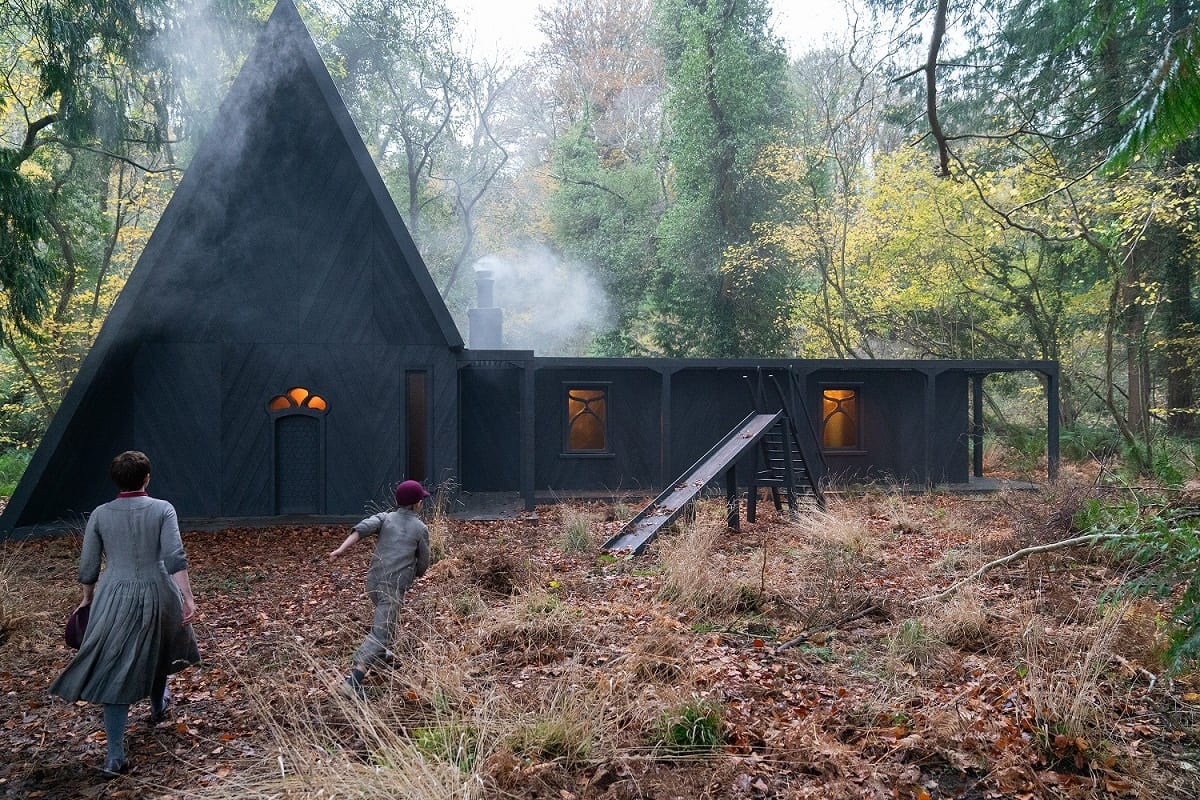 Gretel & Hansel will naturally draw comparisons to The Witch, and to an extent, they will be appropriate. However, this film feels like a diet version of The Witch. Part of me wishes they had been more willing to take the film to more disturbing places and feel more comfortable alienating their audiences. For the life of me, I cannot figure out why Orion would ever rate this film PG-13 because I don’t think it screams “made for a teenage audience.” It feels as if the studio didn’t know what the hell to do with this film and were worried about losing money off it, so they dumped it in the coveted January slot.

I do have some flaws with Gretel & Hansel, and the first is relatively minor and more so just caused confusion in my viewing experience. There is a prologue in this film (which I loved), and it is shot with anamorphic widescreen lenses. It looks utterly fantastic, and there is some genuinely creepy imagery in this sequence. Immediately following the prologue, the aspect ratio switches to a 1.55:1 aspect ratio, and I found the choice to be slightly confusing and not to have much payoff. Despite this, the film still looks amazing, so this is more a quibble if anything.

My next two flaws are more egregious in my eyes. The first flaw is that I really don’t like the voice-over in this film. I think it adds very little, and it goes as far as to spell things out that come across visually. This is more noticeable in a film with such a distinct and strong visual language. There were points in the film where I felt it bordered on Blade Runner theatrical cut levels of bad. This is pure speculation, but I wouldn’t be surprised to learn that the studio forced the voice-over because they didn’t trust that general audiences would be able to understand the film. I imagine a version of the prologue that didn’t have voice-over would be much more effective and frightening. This is another comparison to draw to The Witch, a film that puts much more faith into its viewer and visual language to maximize the horror.

My next and biggest flaw with this film is somewhat spoiler-ish, but the film has been out for multiple days so I will go ahead and voice it. I think whatever motivation the Witch has regarding Gretel in this film is extremely underwritten. It is very clear that she sees Hansel as food, but in terms of Gretel, I think the assumption that she sees Gretel as a replacement is just that: an assumption at best and grasping at quite a few straws at worst. It feels incredibly underdeveloped to me, and I also feel like it makes the ending choice that Gretel makes quite a bit confusing. Especially with the Witch being the clear villain from the jump whose motivations are never viewed as anything beyond sinister and menacing.

Ultimately, Gretel & Hansel is a pretty good horror film and definitely deserved better than the January dump it received. While I don’t believe this film reaches the heights of Perkin’s superior horror film and directorial debut The Blackcoat’s Daughter, this is an interesting and different type of horror film and I love what it is trying to do. I love the idea of a horror film that has a fairy tale feel to it, but I also love horror films that take place in a rare setting such as this one. Warts and all, I believe this film is worth a look, and further shows the promise of Oz Perkins as an up and coming voice in the modern days of the horror genre.

Thank you for reading! What are your thoughts on Gretel & Hansel? Comment down below!

[…] that is deliciously atmospheric and in line with the 1931 version. Especially after watching Gretel and Hansel earlier this year, I think he could do something mesmerizing with that […]