‘The Half of It’: Familiar Tale, Fresh Characters 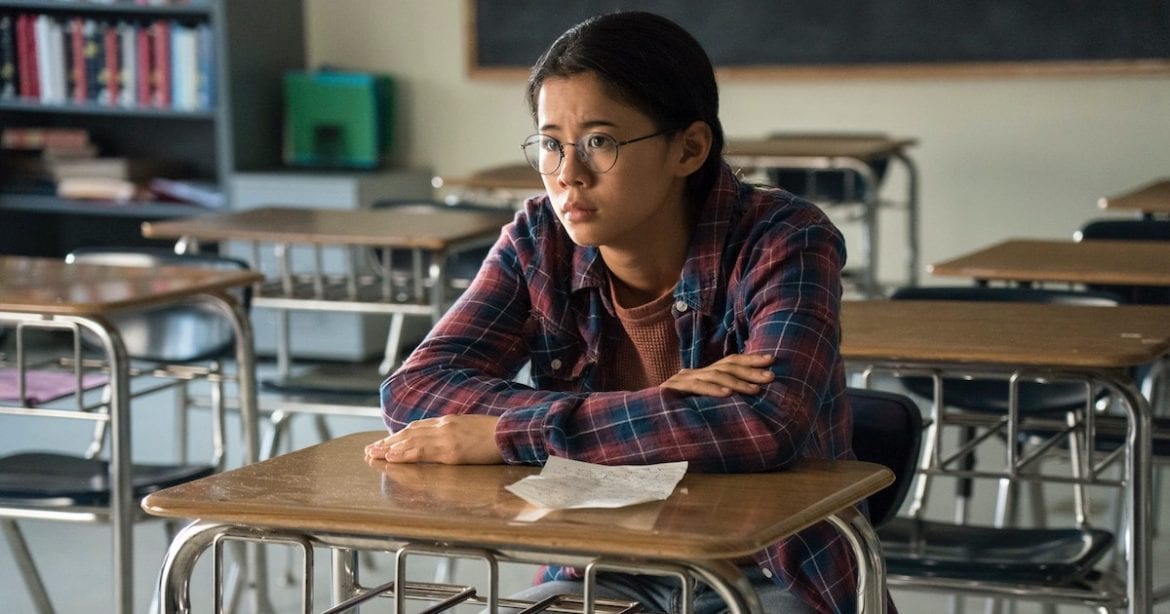 The Half of It, the most recent iteration of Cyrano de Bergerac, after Sierra Burgess is a Loser, follows Ellie, a shy, hardworking nerd, as she helps Paul, a slow but sweet jock, try to win the heart of Aster, the beautiful, popular, and smart woman of his dreams. Of course, Ellie falls in love with Aster, too. And of course, hilarity and confusion ensues.

Written and directed by Alice Wu, The Half of It succeeds Saving Face, Wu’s 2004 directorial debut which also followed a Chinese-American protagonist coming to terms with her homosexuality. Wu, a Chinese-American lesbian herself, has created another story, this time with Ellie, which centers the Chinese-American experience as a young lesbian. And might I say, she does it masterfully. For this review, there was nothing particularly great nor awful about any of the set design, art direction, etc., so I will be focusing on the story itself and the acting.

The basic story goes like this: Ellie Chu, played with earnest and a touch of anger by Leah Lewis, is working hard at school and at home to make money and help her single dad out. How does she make money? By writing other students’ essays. She can never get in trouble because her English teacher, Mrs. Geselschap, played with familiarity by Becky Ann Baker, knows that she does it and doesn’t mind.

One day, the sweet and slow Paul Munsky, played by Daniel Diemer, finds Ellie and begs her to help him write a love letter to Aster Flores, the beautiful Alexxis Lemire. At first, she refuses, but when he offers to pay her enough that she won’t have to write essays for a bit, she accepts. Of course, as she writes to Aster and gets to know her through some texting, she falls for Aster, and Aster falls for “Paul”, too. Ellie and Aster bond over literature, art, movies, and even have an adorable scene where they co-paint a mural that is painted over.

Meanwhile, Paul is starting to develop feelings for Ellie, which all culminates in a love triangle that leaves everyone confused and heartbroken. Eventually, Paul and Ellie make up, Ellie and Aster have a talk, and Ellie goes off to college, to live up to her potential as a great writer. The story is a trope old as film itself, but Wu’s script seems to make it fresh. Ellie and Paul have a really genuine friendship with each other, and Aster, with credit to Lemire’s subtlety, from the beginning has platonic affection for Ellie that easily blossoms into more by the end of The Half of It. The three main characters, and the chemistry between each of those relationships, feels natural and fitting to the story, and makes the conclusion satisfying.

There are a couple of elements of the story that, in my opinion, take it a little over the edge in terms of plausibility. From the beginning, everyone bullies Ellie. Everyone calls her names, a bunch of boys sabotage her piano at the talent show, and students ridicule her wherever she goes. Throughout the film, I only thought “why?” It didn’t make any sense to me. She clearly knows everyone; they pay her to write their essays! Yet, whenever she rides her bike or walks in the hallways, cries of “Chugga chugga Chu Chu!” can be heard as she passes. What did she do? Is it just because she’s Asian? Wu never establishes a motive for this behavior, and thus took me out of the narrative.

Trig, Aster’s boyfriend throughout The Half of It, is supremely dumb and in my viewing, was unnecessary. Wolfgang Novogratz, (quite the name, right?) the actor playing Trig, seems to overdo everything and anything and makes Trig into a completely uninteresting caricature. It would have been more meaningful if he was pursuing her at the same time as Paul, and she felt obligated to be with him as she feels obligated to do a lot of other cliché high school things.

On the subject of Trig, he proposes to Aster in church! They are 18 years old! Granted, The Half of It takes place in a very small town, but it doesn’t really have any characteristics of a town where Aster would be expected to be engaged at 18. Aster is a deacon’s daughter, but it takes place in modern times, and besides the fact that Trig is rich, what is the benefit to them getting engaged? I mean, they are supposed to be in a very small town, Squahamish, which I can only assume is based on tiny pacific northwest towns, but even in the tiniest of towns, I don’t see a lot about 18-year-olds getting engaged before graduation. I could be misreading the intention of this, but it felt out of place in such a modern film.

Wu also really tries to paint Aster as a sort of misunderstood, manic pixie dream girl who happens to be super popular. She’s the equal and opposite of Ellie in that they both feel out of place and out of their element. However, I think Wu went a little heavy-handed in this direction. Wu spends much of the movie showing how different Aster is and how deep she is, and I don’t think so much time had to be spent on it. I bought it from the beginning, it makes sense. She’s a brunette in a sea of blondes, move on. 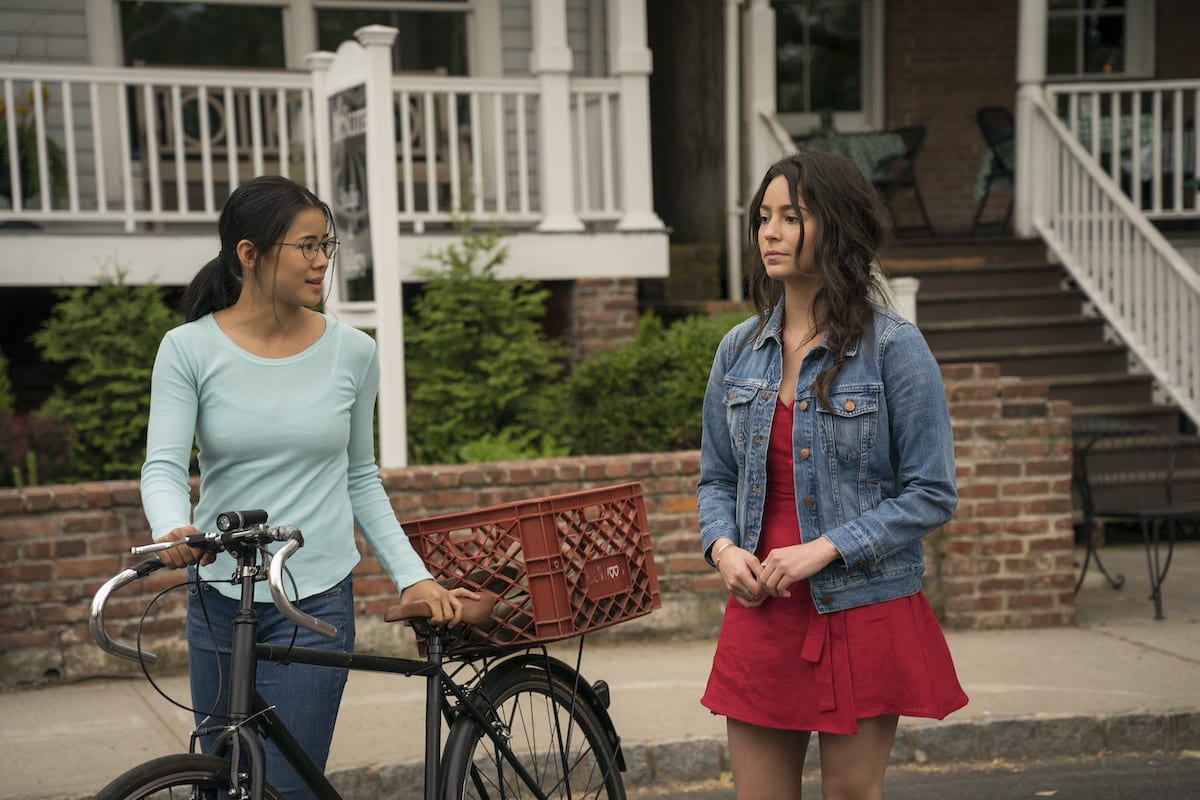 The acting in The Half of It is generally strong, and is really what makes the film worth watching. As I mentioned before, the chemistry between Lemire, Lewis, and Diemer, is the glue that holds the movie together. They’re all charming, cute, and embody their roles wholeheartedly. Frankly, it’s a movie where the audience can tell that all these actors really like each other in real life. It’s hard to pick a standout among them, but Diemer deserves a special round of applause for his spot-on portrayal of a lovable himbo, who is truly a selfless guy. It’s rare to see that from a jock in a high school movie, so that was very refreshing. I mean, his ambition is to have his taco sausage featured in local food reviews. He’s adorable!

Besides these three, there are strong supporting performances from Baker, who some might recognize as the main mother in both Freaks and Geeks and Girls, as well as Collin Chou, who plays Mr. Chu, who is best known for his work in the Matrix films. Baker and Chou, in their roles as Mrs. Geselschap and Mr. Chu, represent the two sides of Ellie’s smarts. Mrs. Geselschap acts as a sort of aunt-figure to Ellie, encouraging her to apply to Grinnell College to pursue a more well-rounded liberal arts education, while Mr. Chu is her depressed father who she has single-handedly supported since her mother died. Ellie’s loyalty to her father stops her from fully pursuing her dreams of getting out of Squahamish, but Mrs. Geselschap is still supportive of her and encourages her to at least try with an application to Grinnell.

Both are lovely portrayals of relationships where the adults in her life want the best for Ellie, but don’t fully understand her motivations for making any particular decision. Squahamish, and its residents, fundamentally misunderstand Ellie. Chou as Mr. Chu and Baker as Mrs. Geselschap show how even the best of intentions are often misplaced with Ellie, and lack an understanding of her that only Paul and Aster seem to have.

The only bone I have to pick with any of the acting is the occasional outburst from Ellie that didn’t seem to fit. For example, at a pivotal point in The Half of It, Paul and Ellie are spying on Aster, and Ellie gets mad at Paul for suggesting they go get food, to the point where she yells at him for not taking it seriously. This reaction felt over-the-top, and it was too early in the narrative for Ellie to have any sort of jealousy or deep feelings for either Paul or Aster. It was too much, and should have been done with a little more subtlety. However, that isn’t to say Lewis wasn’t great; perhaps it was a mistake in direction rather than acting. And truthfully, in terms of Netflix films based in high schools, this acting is a masterclass all around.

It’s Nice to Have a Break

Truth be told, I love this movie. It was cute without being trite, romantic without being overwrought, and representative without being tokenistic. I genuinely feel affection for the main three characters, and am not only invested in their story, but what it could entail in the future. While not spoiling anything, the end of this film is very hopeful, and made me feel very teary, in a good way, in this time of quarantine. I strongly recommend watching The Half of It, if for nothing else, a little bit of realistic escapism in a time when we cannot escape anything.

Thank you for reading! What did you think of The Half of It? Comment below!