WWE Makes a 100-Minute Commercial in ‘The Main Event’ 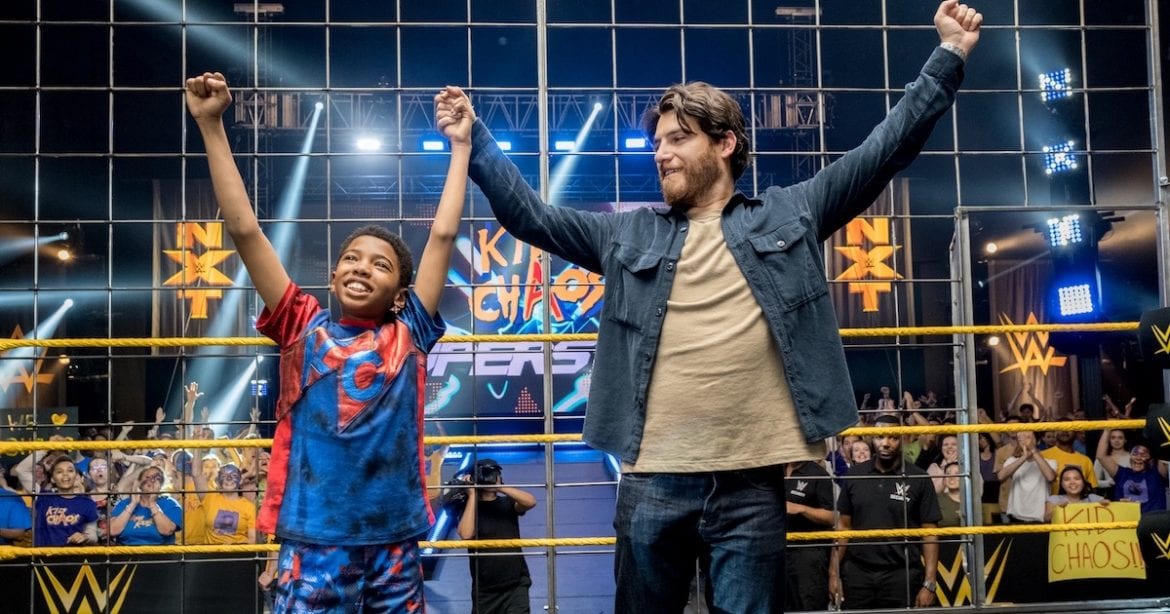 Like many people my age, I practically grew up on Like Mike, the film where Lil Bow Wow — or I guess just Bow Wow now — finds a magical pair of sneakers that belonged to Michael Jordan himself. The shoes give him magical abilities to play basketball better than anyone else, which naturally gets the NBA’s attention. Before you know it, Bow Wow is leading the fictional Los Angeles Knights against some of the league’s best, including some iconic players of the era such as Allen Iverson, Chris Webber, Kevin Garnett, Gary Payton, and so many more.

We all know the “kid plays against the pros with the help of magic or a crazy incident” movie formula. Get a down-on-his-luck kid, throw in some bullies and a nonexistent parent or two, have a scene early on where the kid gains his powers in a fantastical way, add in some cameos from fame-hungry athletes, and then have a pivotal showdown in the third act where the kid loses his powers and has to get crafty to win. The Main Event follows all those bullet points religiously; it’s more faithful than a religious zealot in a Stephen King adaptation. Except the child-like wonderment has been replaced with tired gags and shameless corporate marketing.

Unsurprisingly, 11-year-old Leo (Seth Carr) is a down-on-his-luck kid whose mom is out of the picture. He also has a few bullies at school who shove him into lockers and make fun of his drawings. They’re required to by the universal laws of kids movies. (I told you: these movies are practically on autopilot at this point.) Leo is also obsessed with WWE, and so is literally every other character in this movie. (More on that later.)

One day, after being chased out of school by the lead bully, his evil eyebrows that every kid bully seems to have in film, and his sidekick troublemakers, Leo runs into an old house and locks himself in the storage room, only to find a smelly luchador mask in a secret compartment. After shooing away the bullies, an old butler finds Leo and lets him keep the mask as a consolation prize for being so down-on-his-luck and bullied.

Leo puts on the mask and quickly realizes that he essentially has superhuman strength. The mask also lowers his voice an octave like he’s talking through a voice modulator. It’s the perfect combination of annoying and deeply horrifying.

And so begins the required montage of Leo trying out his new powers. As is tradition, he makes just enough noise in his room for a family member to call up to him. He later kicks down a massive tree in his backyard and it’s never mentioned by Grandma (Tichina Arnold) or dad (Adam Pally). (I know I’m snarky, but considering how massive the tree is, it’s a little odd that no one ever mentions it fell, even in a throwaway background joke, right?)

While watching a WWE event, a convenient ad for a local NXT tryout airs. Leo immediately heads down to the gym to sign up. In what is possibly the most bizarre scene in The Main Event, the woman working the check-in line at the tryout strongly questions Leo for not having a wrestling name yet, not that he’s 11 YEARS OLD. Look, I get that the whole point of this movie is to get a kid to wrestle hulking adults, but can you at least set it up without a character looking like she has no regard for the youth of America?

From there, Leo battles against many competitors, inching closer to the championship match for a large cash prize that will help his family’s financial situation as well as gain a spot on the WWE roster. 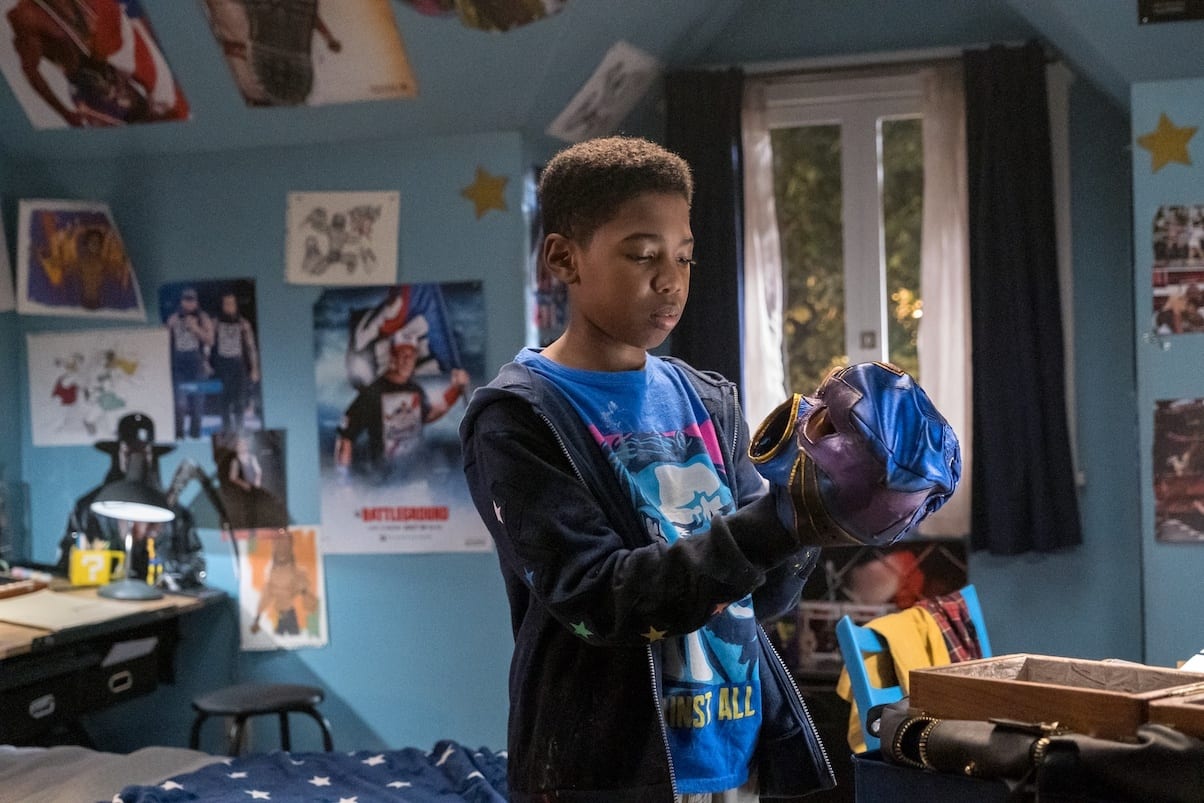 Clearly, The Main Event is intended as 100% wish-fulfillment for kids to enjoy. There’s absolutely nothing wrong with that concept in theory. Coming from the same guy who watched Like Mike an estimated twenty times as a kid (a conservative guess), having this sort of aspirational entertainment for younger audiences is important. But The Main Event is not it — not even close. The Main Event never captures a sense of earnest charm these movies require. More often than not, it’s a vehicle for bad wirework, instead of a vehicle for positivity and as a springboard for Seth Carr.

Seth Carr is a talented young actor, evident in what is probably the most affecting scene in Black Panther where Carr talks to his father as a young Killmonger. The fact that he is working with so little in The Main Event is supremely frustrating. A few glimmers of charm shine through in his unmasked scenes, notably in a few innocent, but cute interactions with a girl he likes, but even those scenes are clumsy. And when he’s wearing the mask — with the wrestling name “Kid Chaos”, no less — the modulated voice is offputting.

The Main Event sprinkles a few sweet moments throughout — the highlight being a cute talent competition — though it’s clearly flatly written and flatly directed overall. The dynamic duo.

The film always resorts to cruelly uninspired comedy. Grandma is always joking about being an Instagram influencer; the main villain fighter only talks in grunts; one wrestler even has sonic fart powers, which doesn’t even make much sense because it’s the only fantastical element outside of Leo’s masked antics.

But rather than director Jay Karas or any one of the four(!) screenwriters credited with writing The Main Event, I blame WWE Studios for turning a harmless, if poorly produced Netflix movie into a disgusting example of corporate marketing. From a business perspective, the idea of WWE Studios makes a lot of sense for the longevity of WWE as a whole: produce films and television shows that can boost their stars outside of the ring. Their films have varied tremendously in quality, from gems like Fighting With My Family to bottom-of-the-barrel VOD material, yet The Main Event has to rank as one of their most shameless attempts to cultivate a new fanbase and sell their product.

All Leo and his friends do is talk WWE. Better yet, every character obsesses over WWE — their worlds revolve around it entirely. The Main Event has the worst tendencies you’ve seen in a Disney movie. Plot points, characters, and settings have the sole purpose of driving merchandise revenue. Cameos from wrestlers are shoehorned in without much effort: my favorite is the appearance by Kofi Kingston, who appears in a suite during the final fight to say generic lines such as “let’s see what happens!” It’s fairly obvious they shot his scenes afterward only to cram them in later for extra star exposure.

As the meeting point between art and business, most movies are always trying to sell you something, but the cold, lazy way in which The Main Event goes about it is entirely distasteful. Considering the final product, full of farts and clichés, you would think throwing all this money into something else — an advertisement campaign, social media outreach, etc. — would have been a better decision. At least then we wouldn’t have to sit through a 100-minute commercial.

Thank you for reading! What are your thoughts on The Main Event? Comment down below!

[…] a guy desperately longing for a woman’s love could be pleasurable to witness in a movie as wish-fulfillment for some sort of fantasy, but, as will be a running theme through this piece, HE KIDNAPPED HER AND IS HOLDING HER AGAINST […]

[…] for them. As such, we discuss Netflix’s Top 10 as well as some of their recent releases like The Main Event, Sergio, and Crip […]