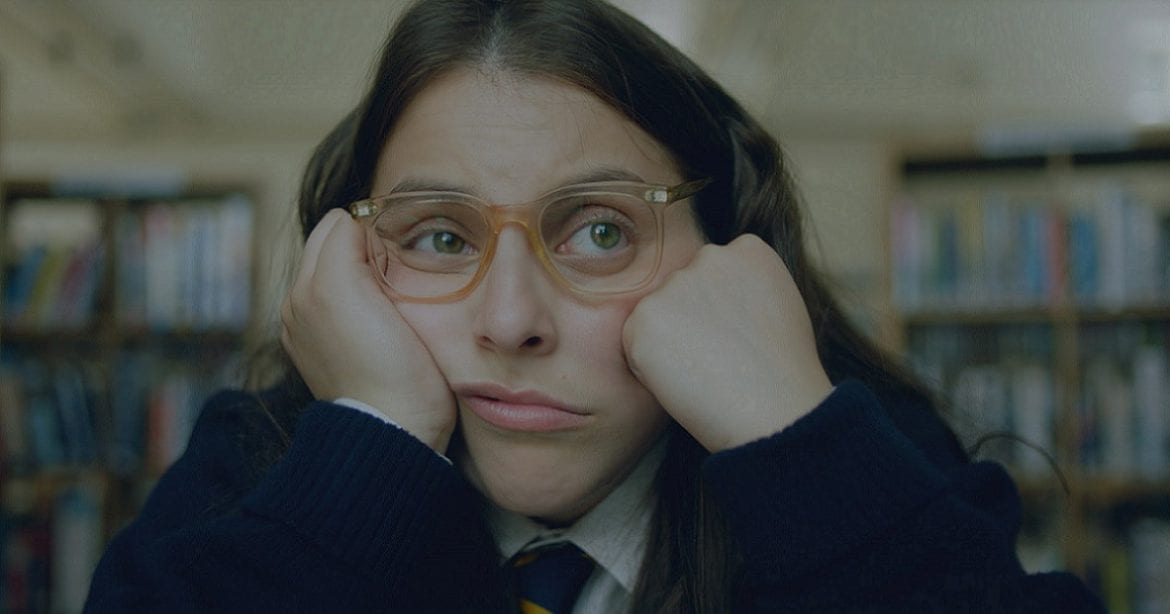 How To Build A Girl is based on the semi-autobiographical novel by English journalist and broadcaster Caitlin Moran. As a woman who was writing for a national music magazine at 16 and writing for The Times and presenting TV shows by 18, her story was ripe for a screen adaptation, and who better to do it than herself as the screenwriter? Certainly, her cinematic counterpoint Johanna Morrigan wouldn’t want her story farmed out to anyone else. Portrayed by Beanie Feldstein in irrepressible style, Johanna is a bold, brash, optimistic teenager that is going to be “…a totally amazing writer. That kind that travels the world, has sex, and writes powerful truths that change people’s lives.”

The only obstacle to that is Johanna lives in Wolverhampton with “far too many brothers”, an exhausted mum (Sarah Solemani), and an unreliable dad (Paddy Considine) with delusions of imminent musical stardom. She barely has a room to herself, so the urge to escape is understandable. At first, her main escape is into her imagination. Her sounding board is a “Wall Of Gods” the posters on her wall of historical figures, brought to life by a veritable who’s who of British celebrity ranging from Michael Sheen as Sigmund Freud to The Great British Bake Off‘s Mel and Sue as the Bronte sisters.

It’s a neat little conceit that means Johanna can talk without overdoing the voice-over. It also drives home just how isolated she is. She’s so short of friends she’s literally talking to the wall. She needs an escape. Her ticket out is journalism, specifically rock journalism. Hired more or less as a joke by hip music magazine D&ME, she’s sent to cover The Manic Street Preachers, their show becoming her road to Damascus moment for rock and roll. How To Build A Girl does a really fantastic job of showing just how life-affirming a good live concert can be. The energy, the excitement, the togetherness of the crowd. It would absolutely sweep a teenager off their feet.

How To Charm An Audience

Someone also doing some feet sweeping is Alfie Allen as indie troubadour John Kite. More recently seen as the hapless Finkel in Jojo Rabbit or the cowardly bully Iosef in John Wick, here he’s an altogether more alluring presence. With a lilting Welsh accent and an easygoing charm, he can captivate an audience as completely as he captivates Johanna. Sadly, you aren’t supposed to be a journalist and a smitten fan. (Gloss over me doing it, it’s totally different, honest.) So, there’s a switch to Johanna becoming a vicious purveyor of snark. This makes her much more of a celebrity. (It’s also much more like the writing of the young Caitlin Moran. “‘Jump Around’ sounds like the music testicles would make” is definitely something I could believe she took from life.)

How To Find Yourself As A Girl

Soon, Johanna’s the scarlet-haired, top hat-wearing, “Lady Sex Pirate” Dolly Wild. An acid-tongued, foul-mouthed hot young thing focused on taking down middling bands. Of course, then there’s the problem of when pretending to be an unpleasant caricature becomes just being one.

That’s the central theme of How To Build A Girl. What’s Johanna supposed to be? A bitch, a friend, a supporter, a truth-teller, or a breadwinner? The answer is, as the great poet Meredith Brooks said, she can be all of those things at different times if she wants. Unfortunately, society has a nasty habit of preferring pigeonholes. Particularly for anyone approaching celebrity. So Johanna has to navigate a scene that is more interested in “Comical Innocent” or  “Vicious Misanthrope” than a nuanced woman. As a teenager at that.

How to Build A Trilogy?

How To Build A Girl was the first in a planned trilogy of novels, with How To Be Famous published in 2018 and How To Change The World coming soon. Is it likely we’ll see (or want) a cinematic trilogy? How To Build A Girl is certainly fun and, dubious British accent aside, Feldstein is a great lead. The cast is amazingly stacked for a movie of this size. If you can get Jameela Jamil to show up for an almost wordless cameo, you’re doing something right. The film zips along at a good pace and Coky Giedroyc inserts plenty of imaginative flair into showing Johanna’s inner world.

It’s not going to change anyone’s life, but Johanna finding her voice, where she wants to be and who she wants to be there with, is an enjoyable, if slight comedy that will leave a smile on your face.

Thank you for reading! What are your thoughts on How To Build A Girl? Comment down below!

‘The Unbearable Weight of Massive Talent’ and the...