This isn't just another romantic comedy about a guy and a girl. 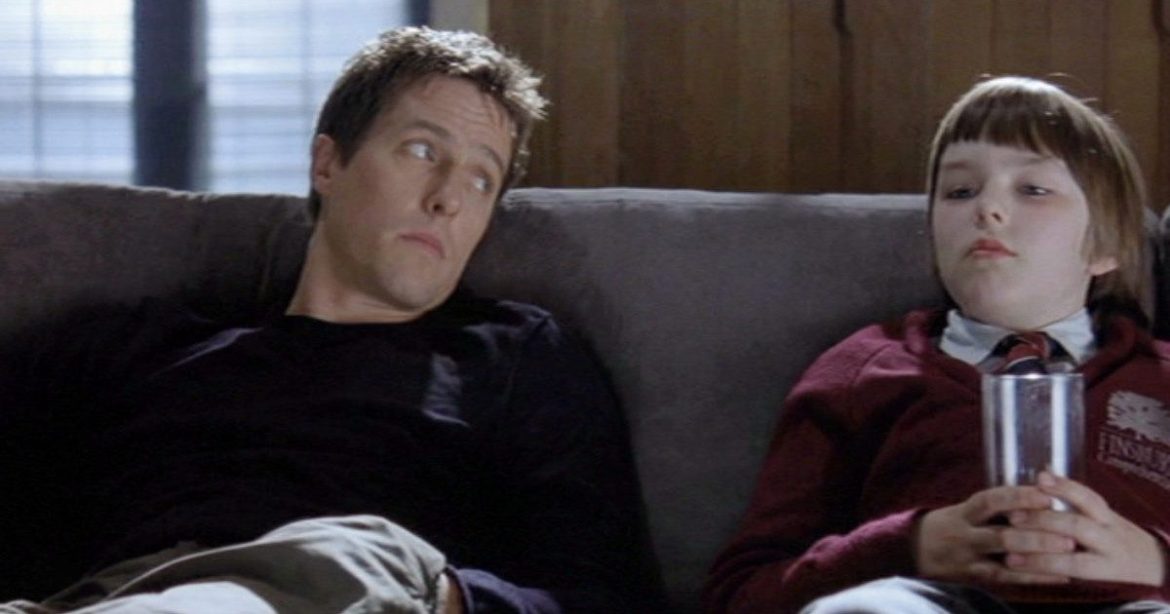 Strangely, About a Boy strays from the romance category and embraces a whole catalog of love. The Weitz brothers — Paul and Chris Weitz — don’t limit the film to the romantic side of love, a side that doesn’t resonate with all audiences. Instead, they explore the relationships between family members, friends, and, yes, lovers. It has something for everyone, whether romantically inclined or not.

The story revolves around Will (Hugh Grant), a self-centered bachelor always looking for the next person who can satisfy his desires. After realizing his preference for under-sexed single moms, he runs into Marcus (Nicholas Hoult), the son of a friend of one of these single moms. Subsequently, Marcus and Will develop a friendship that makes them both better people.

Ironically, romance is the subplot of this romantic comedy. Several relationships take precedence over the eventual romantic relationship between Will and a woman.

The most important relationship in About a Boy is the one between Marcus and Will. They’re both quite lonely in the world, but on different levels. Will flirts and engages so frequently with so many women that no one woman means that much to him. As Will narrates at one point, he had a full life, but it didn’t mean anything. Marcus is also lonely; he is bullied relentlessly at school and the friends he did have dumped him. He has a complicated relationship with his mother, as he loves her but he feels neglected by her when she is having her bad days with mental illness.

That loneliness is what draws the two of them together. Marcus needs someone to teach him how to fit in and make friends. Will needs someone to teach him to have meaning in his life. They form a mutually beneficial relationship that blossoms into a treasured friendship. It gives both of them meaning in their life, something they were sorely lacking but which they both knew they needed.

Marcus and His Mother

Marcus loves his mother but he resents her at the same time. His mother isn’t the fittest caretaker; her attempted suicide shows that quite clearly. Marcus has sympathy for her but he also realizes that he can’t have an absent parent. Thus, he reaches out to Will, hanging out with him every day after school. They don’t really talk much, but just being around someone who will acknowledge his presence is enough for Marcus.

We see other signs that Marcus’s mother may not be the best for him. She doesn’t force him to be vegetarian, but she doesn’t provide him with any other options either. She is unaware of the bullying he faces at school and is completely oblivious to the fact that most of that is because her son is quite different from everyone else. To her, Marcus is perfectly normal and him being bullied is just bad luck. She refuses to believe her son is picked on because he is different.

Both Marcus and his mother make the effort to repair this relationship by the end of About a Boy. Marcus’s mother lets up a bit on her stricter rules and allows for Marcus to express himself. Marcus gives his mother some leniency when it comes to her struggle with mental illness and her personality. It’s not perfect, but it does allow them to feel love for each other again and their relationship is healthier.

After absentmindedly singing some explicit rap lyrics in the hallway at school (a trait that contributes to his bullying), Marcus meets Ellie, a classmate, and they become friends. Later, Marcus reveals to Will that he would like to be more than friends, but he isn’t sure if he wants her to be his girlfriend. According to him, he wants to tell her things he doesn’t tell anyone, touch her, and be with her all the time.

To most people, that seems like a girlfriend. However, Marcus doesn’t call it that. He just calls her a close friend, something he reiterates at the end of the film when he is spending Christmas with her and the rest of his family. It’s not clear how Ellie feels, but one can note that she is happy and also likes to be around Marcus.

About a Boy doesn’t force relationships or labels upon its characters. It allows for things to progress naturally and it doesn’t worry so much about trying to create something that isn’t there. It’s a romantic comedy that doesn’t push any character into romance but allows them to naturally develop a relationship as normal people do in real life.

The relationship between Will and Rachel (Rachel Weisz) is a bumpy road. Will begins the relationship by lying to Rachel about having a child, saying that Marcus was his son when he’s really just a friend. Of course, this sabotages the relationship from the start. However, once Rachel sees that Will is genuinely a goodhearted person who loves Marcus, she slowly changes her tune. By the next Christmas, Will and Rachel are back together and considering marriage.

This is the more typical relationship we expect to see in romantic comedies. Boy meets girl. Boy and girl fall in love and date. Some inconvenient truth is revealed that temporarily breaks up their relationship. Girl sees boy for a kind soul and forgives him.

Even then, it feels like the relationship takes a backseat to the other dynamics I’ve mentioned. Will getting Rachel is almost a side plot. We are invested in the two and wish to see them happy, but not as invested as we are in Marcus’s happiness. The movie really is about a boy.

Thank you for reading! What are your thoughts on About a Boy? Comment down below!