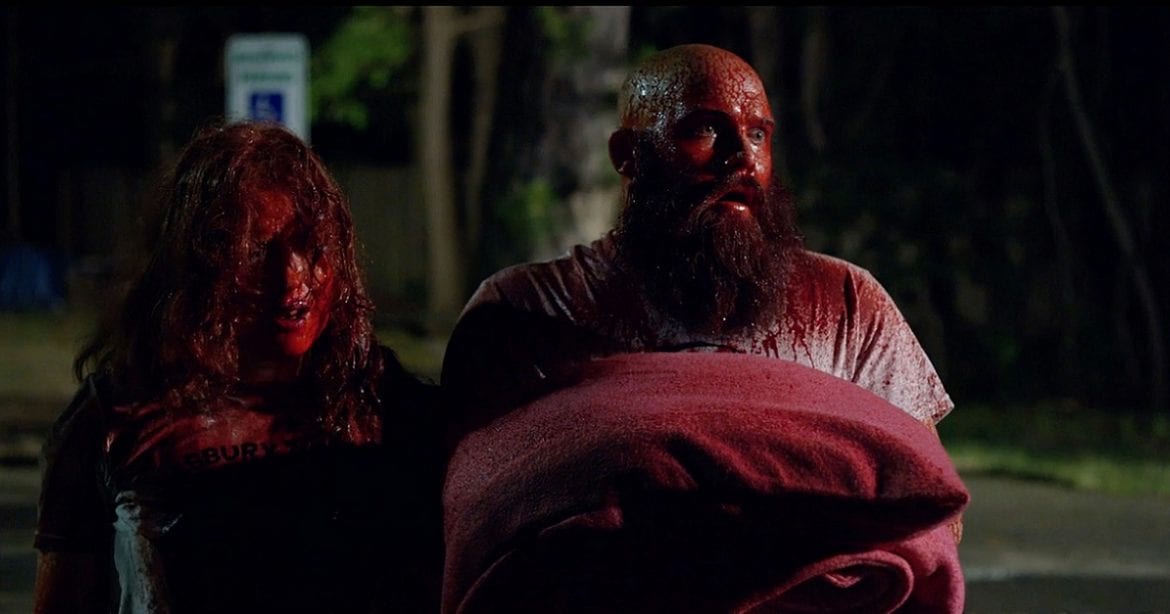 Horror-comedy is an absolutely fascinating genre. It’s an excellent means of psychological and social commentary, while also being light and often so outlandish that one has to laugh between the jump scares. In my experience, I think it is one of the only genres that really gets what existence is: weeding through the scary and the absurd to find the point of it all. Uncle Peckerhead, the newest entry into the genre, does a pretty good job of balancing these two factors. Written and directed by Matthew J. Lawrence, it’s easy to see a lot of heart went into this film. However, Uncle Peckerhead falls short, mainly in that it’s hard to know who to root for, and the stakes are never high enough to hit as hard as they should.

Dreadful in the Wrong Way

Uncle Peckerhead stars Chet Siegel, Jeff Riddle, and Ruby McCollister as Judy, Max, and Mel, respective members of the punk-rock band DUH. They’re broke and a little clueless, but they are about to embark on their first tour, and decide they are going to try to play a concert at the end in order to get a record deal. At the last minute, they realize they need a van, and meet Peckerhead, or Peck, played by David Littleton. Peckerhead likes them, and agrees to drive them around on tour in his van. After their first promoter shorts them their money, Peck reveals himself to be a cannibalistic monster, and kills the promoter in revenge. The bandmates decide to keep him around, even though Judy is extremely skeptical and untrusting. They continue on the tour and meet a cast of interesting characters along the way. Peck is kind most of the time, until midnight strikes and he turns into his monstrous form.

While it’s a clever conceit, an unlikely alliance between band and beast, Peck is too ghastly to be a good guy, and too sweet to be a bad guy, and all the bandmates are pretty annoying. I didn’t find anyone to be particularly likable or even all that interesting, which is a shame. I don’t need to like or relate to a character to find them interesting, but I do think it is necessary for a light-hearted comedy to make someone enjoyable to watch. Ready or Not is another horror-comedy and one of my favorite films. It also has a small cast with a really intriguing conceit, but I really enjoyed every character, good and bad. I think Lawrence fell short in that no one’s motivations or personalities were made clear. I don’t want to lambast Uncle Peckerhead, but I do want to point out that a comedy isn’t very funny if the characters are not amusing or entertaining.

The other main issue with Uncle Peckerhead lies in the lack of any real stakes. If, say, DUH had been offered a record deal at the beginning and had to keep it instead of trying to earn it at the end, I might have been more invested in Judy and her uptight attitude. If I had known how Peckerhead became a monster or if there was any sign of him struggling with it, I probably would have liked it more. I think the beauty in the horror genre lies in the elevated stakes, and how it exposes people’s true natures. I think the beauty in comedy lies in the absurdity of situations, which also expose people’s true natures. Lawrence failed to take it to that level. He, in my opinion, played it safe in a lot of his choices, and then when the real-life consequences to Peckerhead’s actions came in at the end, I felt blindsided and that it didn’t really make any sense.

And again, I don’t mind consequences in films that I don’t agree with or understand. I mind inconsistency. If I am watching a movie where this random monster comes out of the woodwork and kills people, and the media doesn’t start covering it until the last 20 minutes of the movie in this world, that’s a problem for me. The film isn’t giving the audience enough time to process and empathize with the characters. There isn’t enough setup for anything that happens in the final moments to be worth the time I invested, and I find that to be a disappointing feature of what could have been a very creative and interesting film.

I’m (Not Trying to Be) the Bad Guy

Like I said, I don’t want to completely tear apart the film. I thought Littleton as Peckerhead was an excellent casting choice. He’s charming, kind, and rough enough around the edges to warrant a lot of empathy and attention. I have no issues with him as an actor, but I do have issues with Peckerhead’s arc, and that he seems to do a total 180 at the end, turning into a menacing guy with no signs of it to begin with. However, that doesn’t take away from the fact that Littleton did a great job embodying Peckerhead. He made Peck as fun to watch as possible.

The other part of this film I loved was the music. DUH’s music sounds like a real band, and the kind of music I would genuinely listen to in real life. The music from the other bands is excellent as well, and I thought the character development of Max as a frontman and musician was really interesting, too. I wish that had been a more prevalent issue, rather than a sort of B-plot used as a comedic device. It was funny, but there could have been more meaning in it as well. Regardless, my favorite moments were when DUH was performing, and I am glad that I got to see it a lot throughout the film.

I will say, I do not think I am the be-all, end-all of opinions on this film. Ultimately, maybe it just wasn’t my cup of tea. Maybe I don’t get it. But, I like movies. And I wanted to like this one! I really wanted to review it, and I am bummed I didn’t have more positive things to say. I think Lawrence has an interesting career ahead of him, and I think he’s a really good writer with great ideas. I just wish he had amped up Uncle Peckerhead to the level that could have made it really great.

Thank you for reading! What are your thoughts on Uncle Peckerhead? Comment below!