‘Get In’ is a Vicious Descent into Inevitable Violence 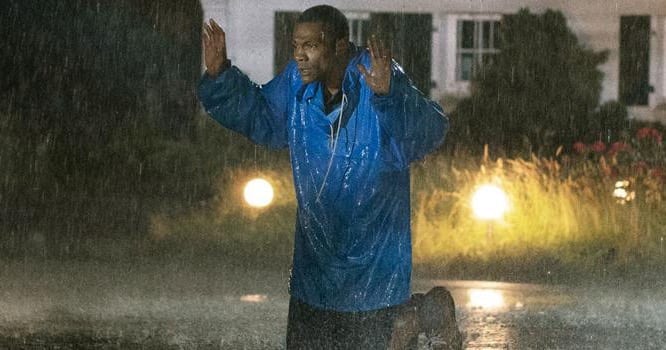 Get In opens with a black man being manhandled by the police on his own front porch. A freakishly prescient scene, as there’s never a shortage of news concerning police brutality against minorities. For many, this seems like strictly an American issue. But as Get In shows, racial tension is just as prevalent in France and around the world.

Even though the film’s marketing makes it seem like a modern slasher film, it’s not like that at all. Don’t let the pictures of men in hideous pig masks fool you. This is not about the carnage. This is about the build-up to the carnage. Get In is about the undercurrent societal problems that spawned the carnage.

As you can probably guess, Get In is a film with something to say. It’s not just interested in providing cheap genre thrills. So if you’re looking for a simple horror fix, look elsewhere. But if you don’t mind feeling relatively uncomfortable for 90 minutes, then Get In might be perfect for you.

After a two-week vacation, Paul Diallo (Adama Niane) returns home with his wife and child. In their absence, they let their daughter’s au pair, Sabrina (Maria Bourin), and her husband, Eric (Hubert Delattre) live there until their return. Yet when they get back, they discover that these two people have no interest in giving back their domicile. Due to a written agreement, the police cannot intervene on their behalf without a court order.

They decide to pursue legal action, and their lawyer promises a swift ending to their injustice. While they wait, they reside on a campsite, run by a seemingly charming and friendly man called Mickey (Paul Hamy). Mickey was an old friend of Diallo’s wife, Chloe (Stéphane Caillard) and though she doesn’t say much about their prior relationship, she does seem uncomfortable with his presence.

As Paul becomes increasingly frustrated with the impotence of the justice system, as well as his own feeling of masculine inadequacy with his wife, he is invited to a party by Mickey. On the surface, these two men are completely different. Paul is educated while Mickey is more of a blue-collar roughneck. Yet Mickey sees potential in Paul. He wants him to become a dear friend. He even seems to have genuine compassion for Paul’s cause in reclaiming his home.

Yet as they spent more time together, Mickey’s problematic viewpoints begin to seep into Paul’s troubled state of mind. According to Mickey, Paul’s weakness is to blame for his problems. As a man, he should reclaim his territory, not just stand idly by. He must go the distance if he wants to get his home back.

The masculine brotherhood Paul feels among Mickey and his clan begins to change him from inside. And his willingness to reclaim his home, and his manhood, will culminate in one event of ultra-violence.

A large population of France has aligned itself with the extreme right. It’s not just a small group. Remember, it wasn’t that long ago that Marine Le Pen was close to being elected president. People fear that this multicultural society has deprived them of some sort of national identity. People don’t know what’s going on, they long for answers. People want to belong somewhere, to fight for something. A seedy politician will capitalize on their fear, fabricate a national identity, create an alternate history. Soon there’s tension. Even the threat of violence.

Get In might not name politicians or be strictly political, but it does convey the incendiary tension within the nation. There’s anger against the establishment and the judicial system. The need for an uprising against political correctness, to reclaim masculine dominance. It conveys the racial tension that is buried beneath civil discourse.

It doesn’t matter whether these grievances are justified or imagined. People believe it’s there, that’s what matters. Their inability to change the world, to give some sort of cosmic justice to their existence, can turn them desperate. Or in the case of the main character of Get In, join a group of men with a dangerously Darwinist viewpoint.

It was an inspired choice to cast Paul as a black man. Having him as another white man breaking bad would have made him yet another Travis Bickle. The prejudices he endures throughout the film are subtle, but there. He struggles with his racial identity as people expect him to act in a certain way. It adds to his feeling of helplessness throughout the film.

In many ways, Mickey and his clan represent the disillusioned men who begin to justify a violent cause. The cause might not have an exact ideology in this case, but that doesn’t matter. It’s indicative of a troubled culture. To make the point even more clear, there even use the slaughtered remains of pigs as a form of protest — something that has been used by extreme right-wing circles as a protest against mosques.

All of this is exceedingly apparent when considering the original French title of the film, Furie, meaning anger.

Even though the film does venture into grotesque violence, Get In takes its time to get there. Similar to Sam Peckinpah’s Straw Dogs, a film Get In is obviously inspired by — though luckily it does lack that same misogynistic bent. (If you’ve seen Straw Dogs, you know the one I’m talking about.)

Like Straw Dogs, the climax becomes a siege film, in which a group of characters has to fight off some dangerous people. The difference, however, is that the lack of police authority in Straw Dogs seemed reasonable. Considering the era and the remote location, violence was the only means of protection for David Sumner (Dustin Hoffman) and his household.

The situation isn’t the same for the violent climax in this film. Without spoiling too much, the need for an explosive finale has one character doing something particularly stupid. There might be a reason for this, an act of stubborn masculinity perhaps. But it’s a frustrating part of a film that mostly had intelligent characters.

Despite the short running time, Get In does have some pacing issues. It’s obvious where the story is heading, and the wait initially provides tension. But eventually, you just want it to get the point.

The film also starts with a banner that it was based on a true story. Yet considering the climax, and the conveniences that come with it, this becomes as believable as the supposedly true story of Fargo. Reality might be stranger than fiction, but it’s rarely as convenient.

The threat, while mercilessly vicious when it starts, is quickly undercut by a few too many conveniences. Despite the subject matter, Get In largely avoided slasher clichés until the final confrontation, when it seems like the filmmakers just couldn’t help themselves. For a moment, it seems like you’re suddenly watching a third entry of The Strangers series.

Mickey is No Tyler Durden

Even though I respect the social commentary, it is rather obvious from the start. The themes are discussed so openly, there’s little room for discussion. It would have been better if everything was below the surface.

While the cast is mostly great, Paul Hamy’s characterization of Mickey lacks the intellectual charm of say, Tyler Durden. A character like this needs to be seductive, make it understandable for the viewer that a normal could follow a guy like this to hell. But Mickey seems like a sleazebag from the start. Frustrated or not, it was apparent from the beginning that this guy was not be trusted.

Adama Niane is sincerely great as Paul, yet it’s hard to understand why Mickey takes a shine to him. Their differences seem doomed to eventually clash. It simply doesn’t feel as natural as it should. It feels like they became friends just because the script told them to.

Another frustrating aspect is that the squatters themselves are deeply underdeveloped. They are given a clear motivation, but their unapologetic attitude towards the Diallo family makes them deeply unlikeable. Perhaps this is intentional, as the focus is on Paul’s rage. But if we got to understand these people more, and given more of a reason to care for them, the eventual tragedy would have been more meaningful.

Should You See Get In?

It’s hard to recommend the film. It’s mostly an uncomfortable watch — especially if you’re squeamish toward depictions of animal cruelty, you should certainly avoid Get In.

But there’s a lot to like about this film. From a filmmaking standpoint — cinematography, acting, and the relative tension throughout — it’s a worthwhile watch. It’s just unlikely you’ll ever want to see it again.

Thank you for reading! What are your thoughts on Get In? Comment down below!

[…] is an absolutely fascinating genre. It’s an excellent means of psychological and social commentary, while also being light and often so outlandish that one has to laugh between the jump scares. In […]

[…] John Bennett may be the culprit, and fear that Kaley has become a victim to a sex-trafficking ring. Police have yet to identify John Bennett or any further […]

[…] the lens of people with powers punching each other, but still. It’s a refreshing level of social commentary for a genre that had yet to aim for much in that […]

The “Based on a true story” claim really harmed this one for me. The climax is so extreme that it’s plainly not even remotely true. If it was, it would have been a big international story.