Get Scared: When Is It Appropriate for Children to Watch Horror Movies? 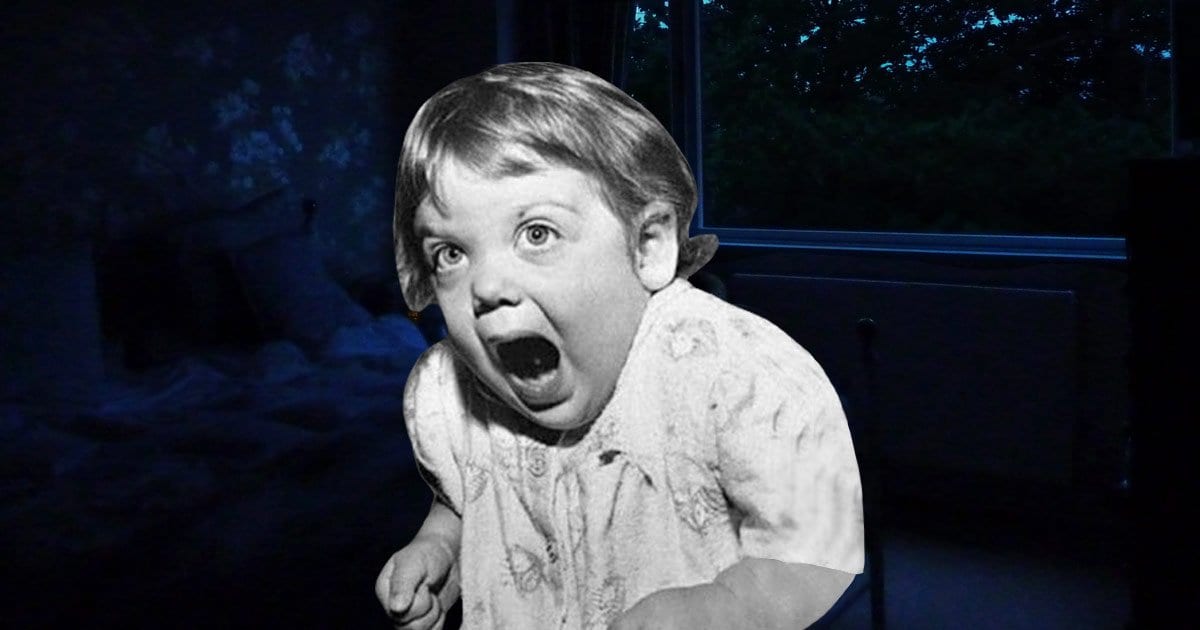 I’m going to be completely honest right now: I hate horror movies. I don’t like being scared. I could barely watch Gremlins (1984) because I am such a naive, impressionable child. If I watch anything scarier than The Village (2004), I will actually die.

Yet, I know that tis the season for horror movies, so I’d like to broach a subject that I’m sure many parents out there are concerned about: when is it appropriate to let your child watch horror movies?

While I don’t have children myself, I do have nieces and nephews and I also have recent experience being a child, so I do have some credibility. However, if there are any actual parents out there who want to contribute their opinions, please do so in the comments! The following are my suggestions for different ages children can begin watching horror movies.

Start your kids out on horror movies straight from the womb so they are never fazed by them! Soothe your baby to sleep with marathon Hostel (2005) viewings! Reward them with The Exorcist (1973)! Ignore the MPAA ratings! Screw the government! Up with anarchy!

Okay, but seriously don’t do this. This is how those creepy little kids in horror movies start out.

10 is a nice round number. 10 is when you finally enter the double digits of life and the world starts to look a lot less scary and lot more inviting.

10 also isn’t a bad age to begin watching horror movies, mostly for children who aren’t as easily scared. Of course, I wouldn’t recommend having them watch horror movies alone (who does anyway?). Parental guidance is a must here; but, as long as there is a parent in the room, I don’t see any problem with starting your kids out young, especially if your whole family loves horror movies. 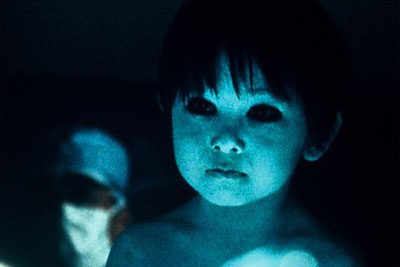 12 is such a weird age because, for whatever reason, society has made it such a pivotal time in our childhood. All those movies about kids coming-of-age? They’re almost always 12. Don’t ask me why, but 12 is just an important age in our culture.

Which is why it’s the perfect age to begin watching horror movies. It’s sort of their passage into the adult world. Once your child turns 12, it’s their turn to be scared out of their wits (only if they want to!). This is that special age when kids really want to push their limits, to see how far they can go. Watching a horror movie is just another way for them to test those limits. It’s better than what I did to test my limits when I was 12 (side note: never snort Pepsi up your nose with a straw). It’s a great age to try new things.

I’ll start off with the most obvious answer: the MPAA recommends that children do not watch PG-13 films unless they are at least 13 or have parental guidance. Most horror movies that you start your child out on will most likely be in this category. Unless you’re hardcore and just throw your kids into the Saw (2004) world.

At age 13, kids will most likely be in middle school, so they’ll already be exposed to a brand-new world of horrors. Will vengeful ghosts really scare them when they already face the damning threat of embarrassment and teen angst everyday?

At this age, kids are usually a bit more mature and can differentiate fiction from reality pretty well. Though they may get one or two nightmares, they will usually be just fine and may even beg you to watch more. That’s what the cool kids do, right? I wouldn’t know…

There’s not a huge difference between 13 and 14, except for the fact that it’s usually the age that most kids start high school. In my opinion, if a kid can survive middle school, they can survive a horror movie.

Age 14 is usually when those hormones start hitting hard — which usually means they may be a little less…agreeable. You may end up having to say no a lot. If you want to start saying yes, you can start saying yes to horror movies at age 14. Your child will be mature enough to handle it, but still young enough to be scared out of their wits.

Plus, most sleepovers at this point will have a horror movie played at some point. It always sucks to be the kid who has to go home when the movie starts, so it’s nice to give them just that little bit of freedom. However, this may not work for everyone. For example, me. I would have cried if I watched horror movies at age 14. I still cry when I watch slightly scary movies and I’m 19.

This is the age that I watched my first horror movie (though it’s more a thriller than anything): The Sixth Sense (1999). I was starting my junior year of high school and feeling a bit more mature than my tween self. Sure, the movie scared the wejeebies out of me because I’m a wimp, but I didn’t scream and cry because I was obviously a lot older and realized that none of it was real (or was it?). 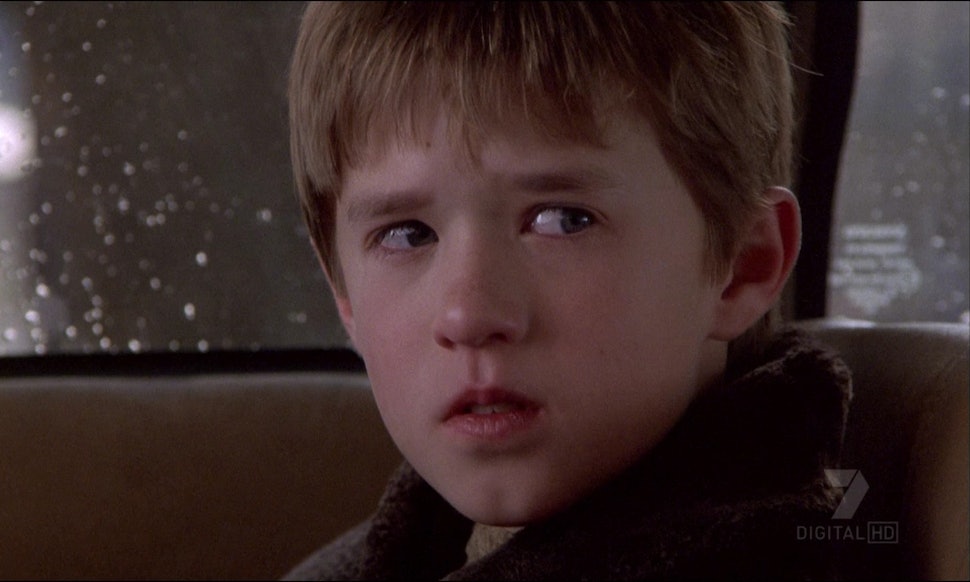 In my opinion, this is a good age for those kids who don’t handle scary stuff very well. Of course, you never want to force your children to watch anything that might make them uncomfortable, but I would suggest that this is a good time to expose certain, jumpier types to horror movies. Watching The Sixth Sense when I was 16 didn’t scar me for life as much as it could have had I watched it when I was 12.

Honestly, is it a horror movie if you’re not drunk?

I mean, I wouldn’t know because I don’t drink, but I can only imagine how much scarier horror movies are when you’re drunk.

Not only is the actual monster/demon scary, but so are the main characters. When did that guy grow a third arm? What’s that shady hat rack doing in the corner? I don’t know what’s going on, so might as well take another sip of beer.

When Did You Watch Your Horror Movie?

We’d really love to hear your stories! Plus, I think you’ve heard enough about me and how I’m a crybaby. Time to get some tougher people’s opinions.

Thank you for reading! What are you thoughts on the appropriate age for children to begin watching horror movies? Comment down below!

[…] love children… most of the time. I have three nieces and three nephews that I would do anything for. The […]

its always good to just ask kids if they are feeling scared. And just end it right there and wait another year or two

Depends on the kid’s personality as much as the age, I think. Some kids will be scared and others won’t. My earliest experiences (about early to mid teens from memory) were of Hammer Horror films from the sixties. I remain a fan of Christopher Lee and Peter Cushing to this day.

Regarding kids, I feel it’s best to introduce them to the idea of spookiness with films intended for that age that have a dark atmosphere such as The Nightmare Before Christmas, Return to Oz, Coraline, etc.

Yes! Films that are sort of scary but marketed at kids are the best ones to start out on

Love this post, especially as a new Mum! I’m such a wuss when it comes to horror, I didn’t really start until I was 15. The only exception is when I was about 10 years old, me and my 4 year old brother were staying with my grandparents for the night. I’d decided I wasn’t tired and went back into the living room and ended up watching Mars Attacks with them. For some reason I loved the movie (still do, to be honest) so I convinced my brother to watch it with me a few weeks later, and I think he still has nightmares about that opening scene with the herd of cows on fire…
He’s 22 now and loves horror movies so I didn’t mess him up too badly thankfully, haha!