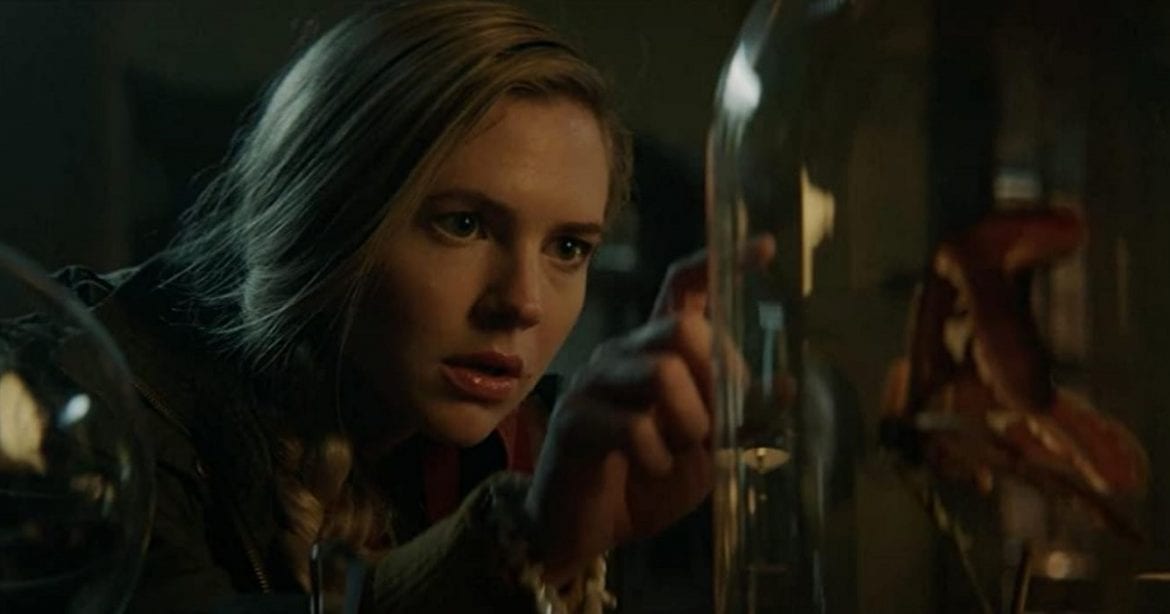 At this point, we should pay attention anytime Shudder picks up a horror movie out of a festival. Or, when they pick up a film in general, for that matter. The service’s original programming is always off the beaten path, odd, and sometimes deliriously violent. Ryan Spindell’s The Mortuary Collection, which played at this year’s Fantasia Film Festival and debuts on the service on October 15th, fits all three designations easily as a fantastic anthology film which should please many horror fans this coming Halloween season.

The issue I have with most anthology films is their overarching purpose (or lack thereof). Sure, you can stitch a few shorts together, but most anthologies fail to become more than just that. With Ryan Spindell being the sole writer and director of The Mortuary Collection, the film is immediately a cut above, offering a clear and stylish vision that plays like Spielberg soaking the screen in blood after he picked up the Coens Brothers’ sense of nihilistic absurdity.

With retirement right around the corner, an old mortician (played by a wonderfully hammy Clancy Brown in lovably cartoonish, sinister old-age makeup) recounts a group of strange and horrifying deaths to his new assistant Sam (Caitlin Custer), each more twisted than the last. Cheekily, the film starts with a very straightforward, short story, only to immediately call itself out and up the ante. The next story featuring Jacob Elordi (the star of my beloved The Kissing Booth) is particularly out there…

The Mortuary Collection‘s combination of the fantastical (thanks to a great score filled with plenty of whimsy from the Mondo Boys) and nasty practical gore effects is a nice throwback of sorts. It captures a wonderful combination of fun and cruelty that few movies even attempt to create these days; the way in which Spindell deftly balances tonal shifts is probably the best thing about the movie.

By the laws of the universe, the worst of humanity ultimately get what’s coming to them, an idea The Mortuary Collection runs with as it gleefully shows horrible people getting their bloody comeuppances. And by “bloody”, I mean outrageously violent and gruesome. It’s so over-the-top you’ll want to gag and laugh at the same time. You want the carnage to get even more repugnant because, let’s face it, these people deserve it! Having Clancy Brown waiting in the wings to cackle menacingly between stories in a Crypt Keeper-esque role is merely icing on the cake.

Thank you for reading! What are your thoughts on The Mortuary Collection? Comment down below!

[…] mixture of horror schlock and social commentary, emulating the spirit of the classic HBO TV series, Tales from the Crypt, with its whimsical attitude to the terror on screen. But it also had something to say. It […]