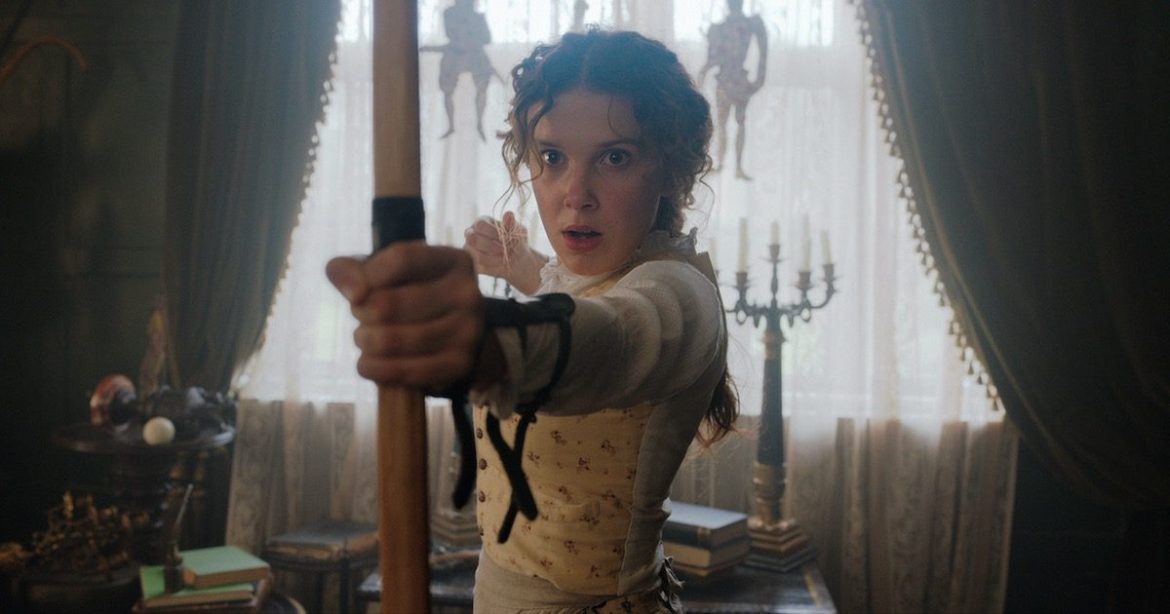 Ah, autumn. The leaves changing colors, the air getting crisp, the faint smell of campfires. Autumn is my favorite season, and it only has a little bit to do with the fact that I have a fall birthday. It is also the best season for movies, period. Every Twilight, Harry Potter, and Hunger Games came out in the fall, and you know I was at the midnight premiere of all of them! One of Netflix’s newest films, Enola Holmes, joins a pantheon of excellent teen-focused movies. Enola Holmes is the perfect movie to watch on your bed or couch with a cup of something warm. It embodies the exact feeling of a Harry Potter marathon or the Halloween specials on ABC Family. My only complaint, truly, is that they should have released this mid-October.

Enola Holmes, based on the book series of the same name, follows Sherlock’s younger sister, Enola (Millie Bobby Brown). Her mother, Eudoria (Helena Bonham Carter), goes missing, so Enola takes it upon herself to find her when her brothers, Sherlock (Henry Cavill) and Mycroft (Sam Claflin), prove unwilling. As she tries to discover more about her mother, she meets the adorable Marquess Tewkesbury (Louis Partridge), who is running away from his family. Through clever problem-solving and general resourcefulness, Enola finds out more about her mother, herself, and the world around her.

Jack Thorne, the screenwriter, does an excellent job with Enola. I will admit, I haven’t read Nancy Springer’s source text, so take my praise of Thorne with that in mind. On the movie’s own merit, however, Enola’s breaking of the fourth wall and narration is crucial to providing points of backstory and exposition without feeling forced or like a cop-out. Furthermore, Enola is sharp and capable, but she is not extraordinary. She doesn’t have Sherlock’s mind-blowing intelligence, Mycroft’s political instinct, or any particularly extraordinary skills. Neither, however, is she just some bland person, who adventure happens upon one day. Enola makes her own adventure, and defines her own story with her skills. In this way, she’s one of the most realistic teen protagonists I’ve seen committed to film.

The story is engaging enough to hold anyone’s attention, but it’s not so convoluted that one feels like the conclusion came out of nowhere. It feels more akin to a Hercule Poirot case than a Sherlock Holmes case, if any of my Christieheads know what I mean. An exemplary performance in lighthearted storytelling.

I am sure MBB’s producer credit helped nab some of the big names in casting, but I do have to question Cavill as Sherlock. He’s too…handsome. Sherlock is skinny and smart and socially awkward and a little messy. He is not Superman. Claflin as Mycroft was also a little too sexy for the role, but I do admire the risk taken in reshaping our impression of these two iconic characters. Despite my hesitation with an incredibly handsome Sherlock, I think the chemistry between Claflin and Cavill was excellent. They played their grudging respect and sibling rivalry perfectly. They both naturally embodied the role of an older brother to MBB, as well, in different ways that display sibling dynamics very well, in my opinion.

Bonham Carter was another interesting choice, but one that fit better than Cavill or Claflin. Her natural eccentricities lend well to a mysterious but beloved character like Eudoria, and she does look like she could be MBB’s mom. I bought it, I found her performance to be moving and intriguing.

The crown jewel, of course, is MBB as Enola, and, more surprisingly, Partridge as Tewkesbury. They are excellent, and their chemistry was immaculate. It made me feel like I was sixteen again, waiting with bated breath for Katniss to kiss Peeta. MBB brings such a maturity to this role, which is only cracked when she realizes how cute she thinks Tewkesbury is, which was a gorgeous acting choice on her part. Enola looks at the camera and smirks, blushing a bit, and I wanted to hug her and braid her hair and ask her how it’s going with the young Marquess. Maybe I just want Enola as a little sister. Partridge plays Tewkesbury just right, as charming, sweet, and a little dumb. But, it works! Enola is smart enough for both of them! She can teach him all about everything! I loved it.

An Atmosphere of Autumnal Excellence

I have to give big props to Consolata Boyle’s costume design, which rocked so hard. I loved how colorful and over-the-top all the outfits were. She did the costume design for another one of my favorites from this year, Radioactive, and in both, she manages to capture a period realistically without making it gloomy or too grounded in realism. She captured a lot of the essence of each character in their outfits, Mycroft being very buttoned-up, Enola’s different clothes all displaying different facets of her coming-of-age. She’s a tomboy in her loose skirt and vest, she’s a lady in her fine red silk gown with a petticoat, and she’s finally somewhere in between, just a young girl who seeks to make more adventure in a simple white frock, ready for the stains of life. All displayed gorgeously. I’m glad everyone was clean, I liked that Enola ran in heels, it’s a movie, people! I am not going to justify this, it was delightful.

Michael Carlin’s production design also gets a big pat on the back for me. Echoing my thoughts on costume design, it was realistic without reminding me how dirty everything was in 1800s London at every turn. The colors were excellent, the scenes in the country were gorgeous, and it just felt so cozy and perfect. Carlin filled this world with lush oranges and yellows, all so autumnal in tone. It felt like I could live in this world, solving mysteries, and I could be happy and comfortable. 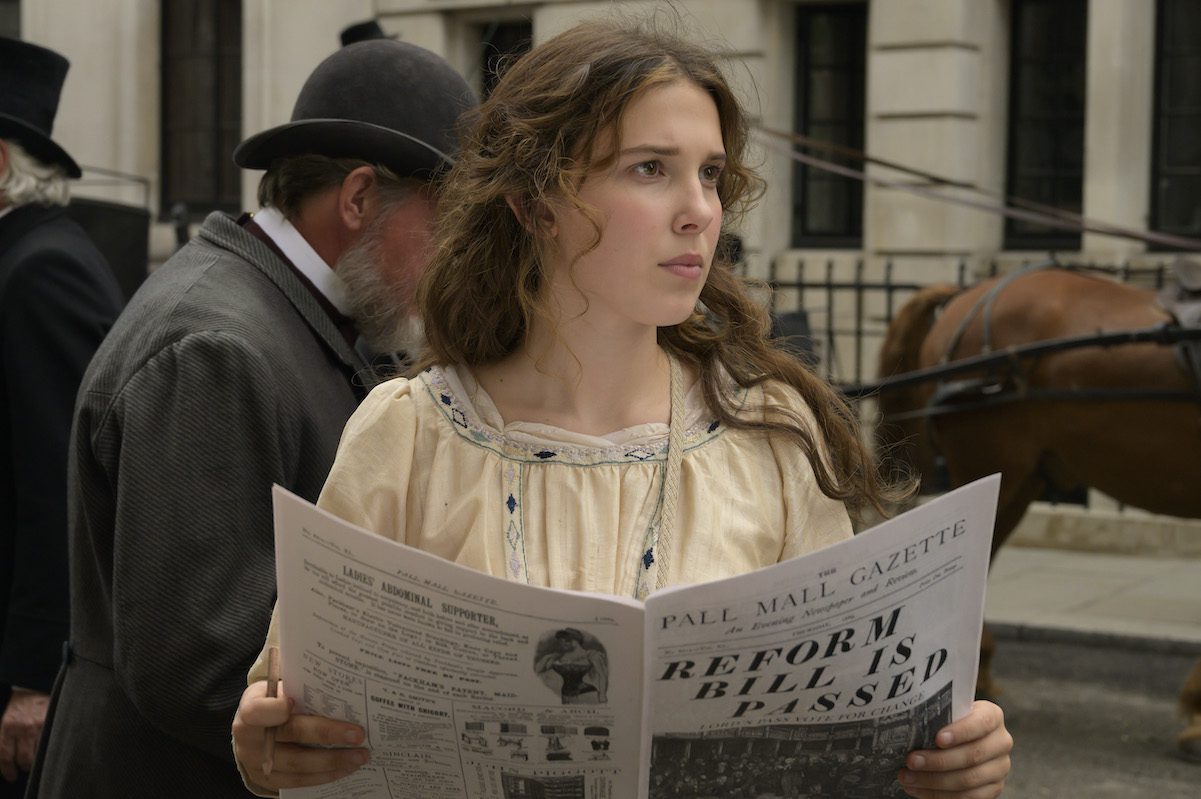 Curl Up with MBB

Honestly, I’m going to stop myself here, or else I’ll gush for too many words! Netflix’s major error, and I am saying it emphatically, is releasing Enola Holmes in September. This is not a 70-degree (Fahrenheit) movie! This is a 55-degree (again, Fahrenheit) movie that you watch with your sibling or roommate or partner. With a cup of spiced cider, maybe spiked with a little bourbon if you’re of age. A big blanket covering both of you. It is THE October movie of this year. I cannot stress this enough. This is why I delayed this review. I wanted to draw a second wind of attention to the film in October, when it should have premiered. Netflix, hire me to do your scheduling. I can make your good films great by telling you when to release them.

Enola Holmes is fun, lively, sweet, poignant, and most likely getting a sequel. I can’t recommend it highly enough, especially since we are almost guaranteed about to hit the second wave of COVID. Stay inside, curl up, and let Millie Bobby Brown take you away.

Thank you for reading! What are your thoughts on Enola Holmes? Comment below!

[…] But there’s a reason various critic groups and esteemed filmmakers typically put Citizen Kane at the top of their best movies ever lists — it’s really, really good! Kane is a […]