‘Radioactive’: The Burden of Brilliance 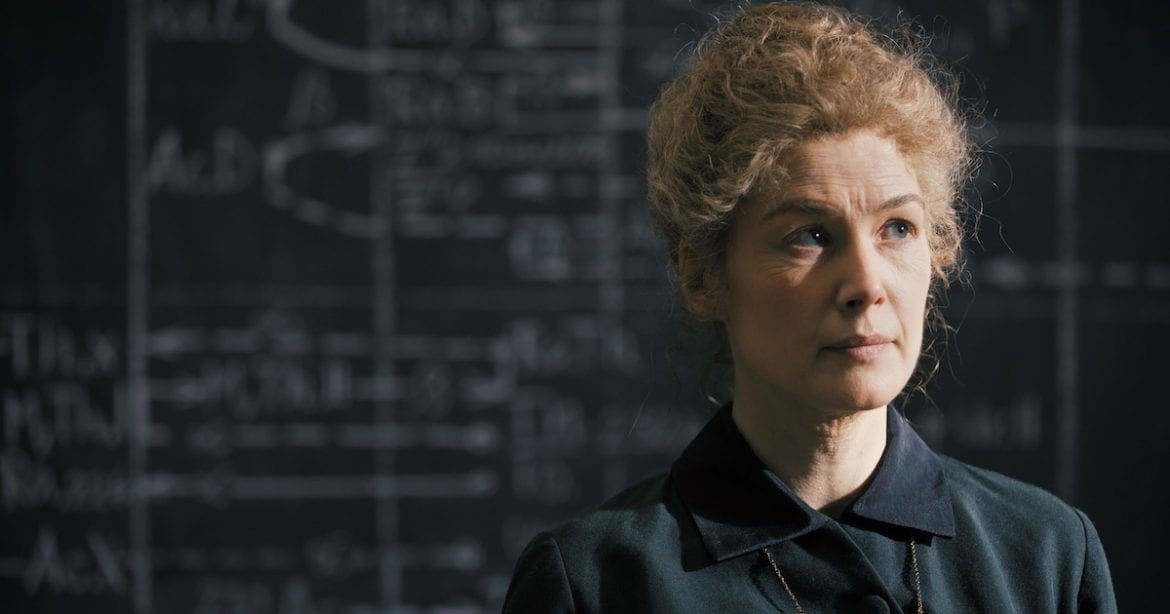 Biopics, or biographical films, are often difficult to pull off. They are often polarizing, especially among those who are experts or fans of the subject. Bohemian Rhapsody was revered in many ways, but historians and fans of Queen alike noticed the mishandling of Freddie Mercury’s bisexuality. Harriet, although faithful to Harriet Tubman’s story, struggled to create an interesting story structure. Even Extremely Wicked, Shockingly Evil and Vile only really focused on Ted Bundy’s public murders, and had a hard time adding a new perspective to the already pervasive story of a famous serial killer. Radioactive, the story of Marie Curie, is much different than the average biopic. Marjane Satrapi and Jack Thorne, the director and screenwriter of this film, take a lot of interesting visual risks that end up really paying off to tell the story of an incredible person who lived a huge, if somewhat tragic, life.

Marie Curie was the first woman to ever win a Nobel Prize, and the only person ever to win one twice. She won these prizes for her work with radioactivity, discovering polonium and radium. Her work has made chemotherapy, the atomic bomb, even smoke detectors possible. Her impact on science and humanity cannot be overstated, and Radioactive makes sure we all know her legacy. Rosamund Pike plays Marie with an air of anxiety and pragmatism. Pike, known for her roles in Gone Girl and Pride & Prejudice, is woefully under-recognized in her abilities as an actor, and has been for her entire career. This performance simply underscores how dynamic and forceful her presence on screen is. She commands every scene she’s in, and adds so much dimension to a woman who could easily be played as only cold and scientific.

Sam Riley is Pierre Curie, Marie’s partner in every sense of the term. Riley and Pike embody these people so fully, and the love and respect between these two as actors but also in their roles adds an almost comfortable backdrop to their groundbreaking and dangerous careers. The writing and dialogue are delivered spectacularly by every performer. I cannot credit all these actors enough, truly, as they carry the film. Supporting performances by Simon Russell Beale, Aneurin Barnard, and the enigmatic Anya Taylor-Joy round out a dynamite cast.

The most interesting part of Radioactive, beyond the acting, was the choice of graphics and time-jumps. They are first introduced when Marie is explaining her research to the wife of a colleague, and while she speaks, the concepts she is talking about are illustrated in very detailed 3D graphics. I don’t mean things like a bar chart or diagram, rather the actual act of what she is describing drawn and animated out. It’s shown again when Pierre and Marie go over all the different products radium is being used for. Those are the two examples that come to mind, but these visuals scattered throughout the film.

At first, I was really thrown by them, but I think they illustrate some really complicated points effectively, since this science is above the heads of a fair portion of any given audience, myself included. While at some points these graphics are jarring, I think their effect is overall positive to the film experience. 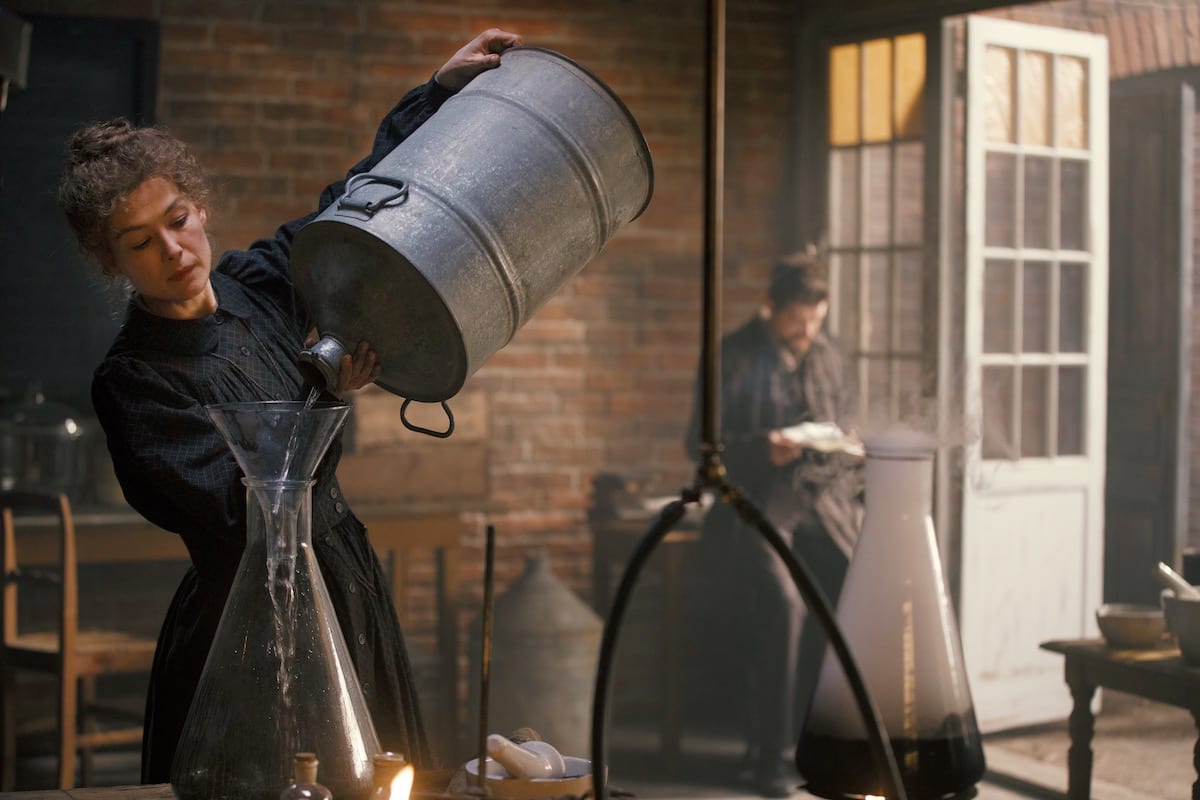 The time-jumps, overall, are brilliant. Throughout the film, we are taken back and forth to Pierre and Marie’s childhoods and throughout their life together, but also into the inception of chemotherapy in the 1950s, Nagasaki and Hiroshima in World War II and the Chernobyl Disaster. All of these are extremely effective not only in showing how impactful Marie’s work was, but also how heavy the burden on Marie was for her entire life. She was aware pretty early on that her work would kill her. She knew how dangerous radioactive isotopes were, and she felt massive guilt over it. Imagining the impact that had on her mental, physical, and emotional health is absolutely devastating. These time-jumps intertwine in an absolutely gut-wrenching ending, and punctuate the entire film. The effect of these cannot be overstated, truly.

Persepolis to Radioactive: a Director’s Journey

I would be remiss not to talk about the director, Marjane Satrapi. She’s the Iranian author of Persepolis, the most famous graphic novel to have been released in the past 20 years. She wrote and directed the film adaptation, but only has three other films under her belt from Persepolis to Radioactive. Satrapi was a brilliant choice in director, because her ability to intertwine the personal, political, and historical contexts of a person’s life is unparalleled. And how many other people have such rich contexts in all three of those categories besides people like Marie Curie? Few people in history are so well-known, so influential, as Marie Curie is. Satrapi was the absolute right choice for a story of this magnitude, and I wanted to give a whole paragraph to acknowledge how spot-on this choice in director is for this film.

As I said earlier, biopics are hit or miss, and it’s not possible for any one biopic to be perfect. However, Radioactive is singular in its study of not only Marie and her personal life, but expanding the story to include everything she has made possible, good and bad. There is no attempt to glamorize or undermine her life and work. There is no agenda. It’s telling the true story of a remarkable person, who was eventually killed by her own work. It’s a moving and heartbreaking film where I also genuinely learned some things I didn’t know. I don’t know what more you can ask for in any biography in any format.

Thank you for reading! What are your thoughts on Radioactive? Comment below!

[…] George Knightley in the recent reboot of Emma. As the romantic lead/finger-wagging big brother to Anya Taylor-Joy’s Emma Woodhouse, he was the perfect counterpoint to the naïve and annoyingly headstrong […]

[…] all the outfits were. She did the costume design for another one of my favorites from this year, Radioactive, and in both, she manages to capture a period realistically without making it gloomy or too […]

It seems like something worth checking out, but I’m not expecting anything amazing.