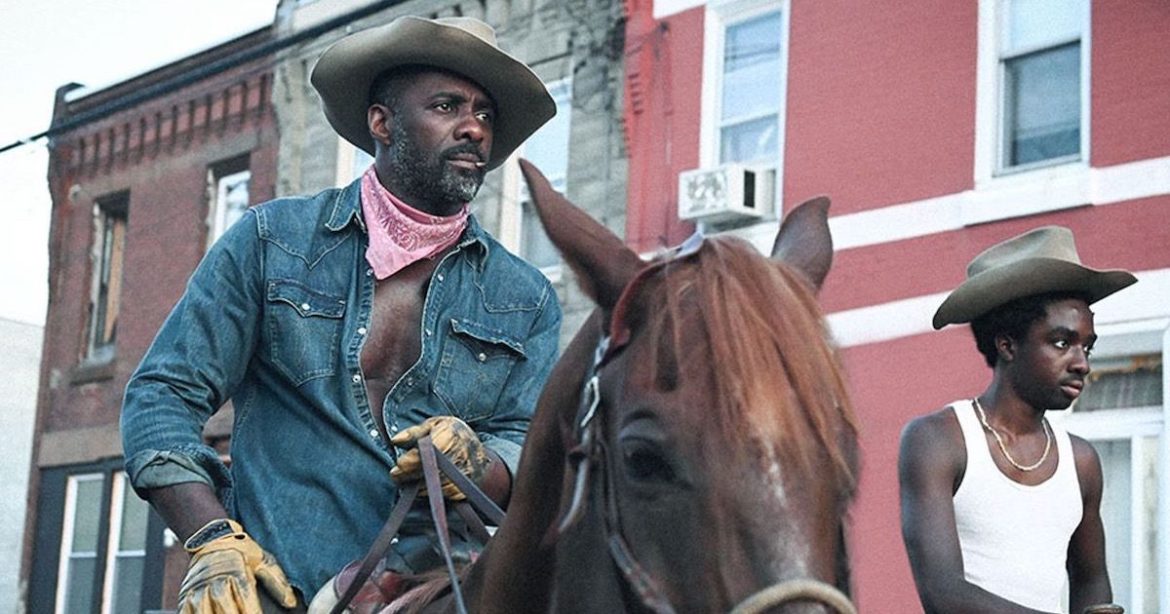 MovieBabble continues to be my not-so-subtle avenue to share my love for my hometown of Philadelphia, and what better way to continue that trend than to talk about a movie where Idris Elba rides a horse through the North Philadelphia streets?

Based on Greg Neri’s novel Ghetto Cowboy, Ricky Staub’s Concrete Cowboy dramatizes the story of the Fletcher Street Urban Riding Club, a non-profit organization of Black urban cowboys who care for horses and provide a positive influence for neighborhood kids. Cole (Caleb McLaughlin) is sent to his estranged father Harp (Elba) in North Philly by his mother (Elizabeth Priestly) after getting expelled from yet another Detroit school. Cole’s mother leaves him stranded on Harp’s doorstep, and to break Cole in, Harp immediately hauls him up with one of his horses he has staying in an abandoned house near their riding fields.

Given his cantankerous attitude, Cole is having none of that and quickly leaves the makeshift stable and catches up with his friend Smush (Jharrel Jerome) who involves Cole in his criminal schemes. From there, Concrete Cowboy plays out how you would expect, with Cole initially reluctant to helping Harp and his crew with the horses while making money with Smush on various drops, only to slowly give in over time and begin to reform. He even has to break the most out-of-control horse. Symbolism!

It’s frustrating to see Concrete Cowboy stick to a version of the same story we’ve seen so many times, including this year in Charm City Kings, which generally follows a similar structure and also spotlights a very particular, real way of life that is very specific to its city. Swap out Baltimore dirt-bike riders for Philadelphia horse trainers, and you essentially have Concrete Cowboy. Supporting characters are rounded out with actual members of the Fletcher Street Urban Riding Club too (as were members of the 12 O’Clock Boys in Charm City Kings), which suggests shifting Concrete Cowboy away from a standard narrative toward something closer to a docudrama would have been a better fit for the material. The riders eventually share their stories during the end credits, explaining how the Riding Club gave them an outlet to grow and avoid dangerous activities, but the immersion in their lifestyle is lacking.

What saves Concrete Cowboy are its performances, mainly from Idris Elba, Caleb McLaughlin, and Jharrel Jerome. Elba and McLaughlin are a great father-son pair, blending in with the other riders authentically. Much like other members of the Stranger Things cast, Caleb McLaughlin is clearly ready to break out and become a nuanced performer; Concrete Cowboy seems like a great sign of things to come for him. While his crime subplot with Jharrel Jerome borders on cheap, seeing those two play off each other is eminently exciting. (The movie is also another great reminder that Jerome makes every movie better.) The plotting may seem inauthentic, but the performances never are, which adds just enough legitimacy to this story of a fading existence.

Thank you for reading! What are your thoughts on Concrete Cowboy? Comment down below!