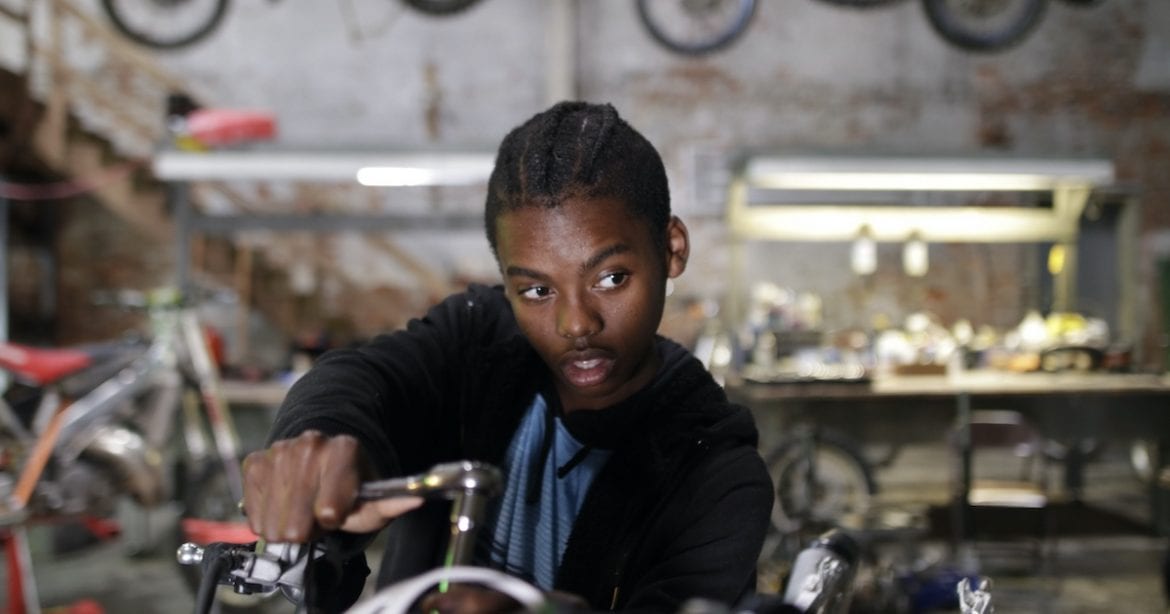 After my first experience at Sundance last year, I arrived this year at the festival cognizant of the hyperbolic reactions that come with the environment. (Or, at the very least, I did my best. I’m an excitable human.) Park City, Utah is scientifically engineered to elicit a great response out of critics and fans alike: its elevation level makes many loopy and the energy from the crowds is hugely infectious. (A few beers at such an elevation is enough to make anything seem like the best movie ever.) At times, it’s nearly impossible not to get wrapped up in the moment and proclaim each film you see as “the next big thing.” So coming into Sundance 2020, I made sure to stay composed. And then Charm City Kings happened.

The premiere of Charm City Kings was one of the most electric screenings I have ever attended; The love for this film was palpable in the room. Quickly following the closing credits, the crowd erupted in a riotous standing ovation. The members of the cast and crew present reciprocated such excitement, overflowing with admiration and vitality during the film’s Q&A session.

However, in this particular case, the elevation was not the overwhelming factor in the film’s success. Even when putting all extenuating circumstances that come with Sundance into consideration, Charm City Kings is an undeniable crowd-pleaser. One that has all the makings of a commercial hit if everything breaks correctly.

At the top of the list of reasons for that potential outcome is the undeniably charismatic lead performance by Jahi Di’Allo Winston. He stars as Mouse, a fourteen-year-old living in Baltimore who wants nothing more than to join the Midnight Clique, a group of dirt-bike riders that his older brother Stro rode for before tragically dying. Winston’s performance is the kind that turns child actors into young stars, one that has instant star appeal, oozes charm, and carries the entire film on his shoulders. It’s the very definition of a breakout performance.

Mouse’s older brother Stro’s passing has left an undeniable mark on him and seems to influence every single one of his actions. Charm City Kings begins with a tribute video to Stro via YouTube clips, and his presence radiates throughout the film nicely without the need for a clumsy flashback sequence of a tender moment between Mouse and him — a device that so many lesser movies of this ilk would utilize. With little touches to the script — often through quick mentions by other characters who were also affected by Stro’s passing — his death is felt by the entire community, not just Mouse. He’s representative of a culture that has negatively influence many young men.

It’s only natural that Mouse wants to follow in his brother’s footsteps with the lack of another positive male figure in his life. Detective Rivers (William Catlett) has taken Mouse in as his protege, but it’s not enough, especially as his mother works around the clock to make ends meet, leaving him unsupervised much of the time. Mouse and his friends Lamont and Sweartagawd (Donielle T. Hansley Jr. and Kezii Curtis) are on their own most of the time, pranking on each other as they run around the neighborhood.

As is tradition in their area of Baltimore to coronate the beginning of summer, the trio heads over to the main street to gaze upon all the older men flying down the road on their bikes, performing all sorts of wheelies and other tricks. The boys are immediately taken aback by a dirt-bike showcase that is capped off by the entrance of the Midnight Clique and their leader Blax, played by none other than Meek Mill. Early on, it becomes rather obvious that Charm City Kings is all about the cycle of crime and the sort of toxic masculinity that festers in such African-American communities. Mouse and his buddies are merely the latest tantalized by the cool bikes, tough guys, and all the seductive infamy that comes with it. 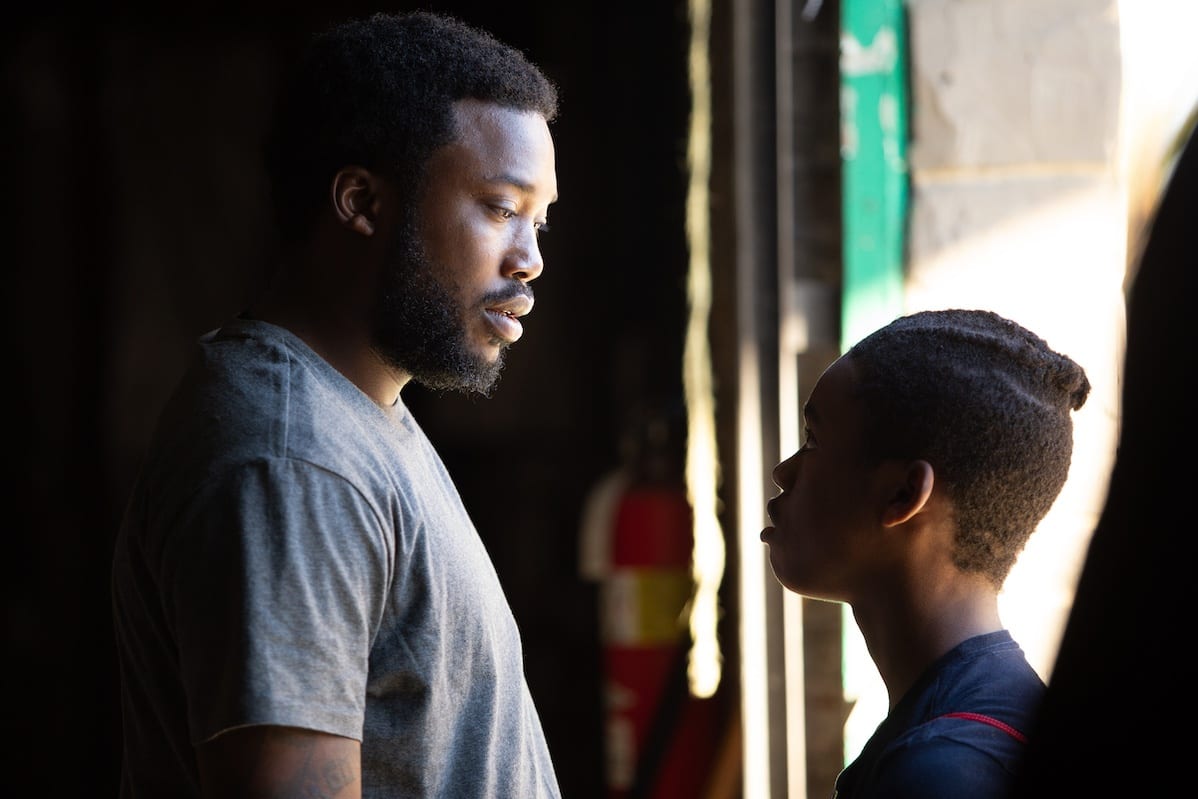 Frankly, many of the pitfalls in Charm City Kings stem from this tension as its earnest delivery is frequently derivative, or borders on parody. Boyz n the Hood comparisons will surely be made by many in this respect, as well as many other links to popular movies about street life. Down to the slightly silly but memorable nicknames given to most of the main cast’s characters.

The opposition to the uber-masculine bikers comes in Mouse’s interaction with new girl Nicki (Chandler DuPont), an amateur photographer and Mouse’s hopeful companion who is sadly underdeveloped. Holding a camera isn’t a personality trait, even if it is the film’s biggest attempt to juxtapose the rage of the Midnight Clique to the warm, sensitive aspects of life outside of Mouse’s mother (Teyonah Parris) pleading with him to change.

Chandler DuPont is exceedingly warm in her delivery, however, which makes some of her and Jahi Di’Allo Winston’s exchanges instantly endearing and often lifts substandard material. (Sign me up for a rom-com between the two a few years down the road.) The same can be said for the rest of this wonderful cast: everyone here is memorable in one way or another. Aside from Jahi Di’Allo Winston, Meek Mill is the standout as Blax, whose character is key to unlocking a lot of what this movie has to offer. Specifically, causing Charm City Kings to feel far more vital than a lot of similar films.

Charm City Kings pulls from the documentary 12 O’Clock Boys for its main story beats, but what translates the most is a keen sense of place. Baltimore is alive as the characters race around town in their bikes and run into one colorful character after the next. At its best, Charm City Kings is a sweeping ode to the city, warts and all. Director Angel Manuel Soto balances critique with love splendidly in many dynamically shot scenes, especially in an extended bike chase sequence to Meek Mill’s “Millidelphia” that will rank among my favorite movie scenes of the year. To put it eloquently, I lost my shit.

Though it’s not simply for thrills that one of Meek Mill’s songs that he released quickly after being freed from prison in 2018 is used so prominently. Meek Mill’s inclusion in Charm City Kings is one of the best examples of stunt casting in recent memory, the kind that uses the person’s skills and public persona perfectly. With any other actor in this role, Blax’s arc would not have been nearly as impactful. It’s a fairly stock shady-mentor-with-a-heart-of-gold archetype that populates many of these movies. But Charm City Kings has the added benefit of Meek Mill’s personal narrative woven into its discussion of race and masculinity. Blax’s actions take on so much more than what is in the script.

You won’t find a lot of range in Meek Mill’s performance — Soto was wise to keep him as a stoic figure that could mask a lot of his possible deficiencies as an actor. In a lot of ways, his performance encapsulates the entire movie: a bit stilted, but overflowing with a sense of passion. Charm City Kings doesn’t quite stick the landing as you’d hope, but there is an unparalleled vibrancy in every frame. The kind that mass audiences can surely get behind.

Thank you for reading! What are your thoughts on Charm City Kings? Comment down below!

[…] a rich Indian family, only to realize this is a futile effort unless he loses his moral compass and turns to crime. Although Man Push Cart has none of the same frills in its filmmaking or structure, it examines […]

‘Minari’ is Uplifting, Tragic, Funny, and the Best...