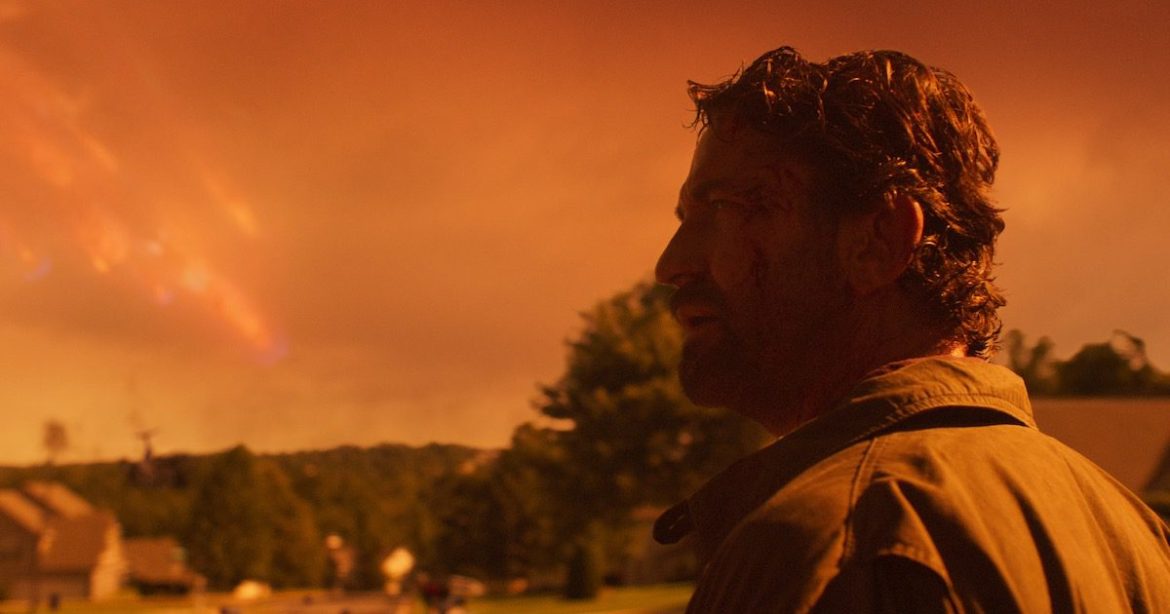 Greenland is Gerard Butler’s latest attempt at starring in a disaster movie, following the flop that is 2017’s Geostorm. Directed by Ric Roman Waugh and starring the aforementioned Gerard Butler along with Morena Baccarin and Roger Dale Floyd, the film follows a family’s struggle for survival in the face of a cataclysmic natural disaster that threatens to end all life on Earth…so basically it’s similar to every other disaster movie. You get the gist. Except this time, Gerard Butler is traveling to Greenland!

In the last few years, Gerard Butler has sadly become a synonym with the word “flop”. Although I surprisingly enjoyed Angel Has Fallen, there has rarely been a movie of his in the last five years that wasn’t either bad or completely awful. Or, worse yet, one that didn’t tank at the box office. The last of which was the lackluster WWII thriller Hunter Killer. After that came one of the most disappointing movies I’ve ever seen in Geostorm. Knowing all of this, I went into Greenland with a certain level of skepticism, hoping Greenland would not end up like the aforementioned Geostorm. Thankfully, Greenland is a cut above.

As the audience, we get that these disaster movies won’t be “the best films ever made” in a classical sense, but we continue to watch them purely for the entertainment of seeing the world be destroyed, and that’s what ultimately keeps us coming back to this overused genre. Perhaps it’s partly a guilty pleasure, but Greenland perfectly demonstrates the two completely different human reactions in a situation in which a planet-killing comet is hurtling toward Earth.

Unlike other disaster movies where the characters only think about themselves, Greenland perfectly demonstrates the kindness of some people and how no matter the situation, they will try and help. Yet, it also demonstrates how selfish some people can be and how they will only try and better their own situation. (A duality that is achingly accurate right now.) Ultimately, that’s where we find our main characters and what makes their journey throughout quite satisfying to watch as their actions change throughout the course of the film.

While on the subject of the characters, the acting actually really worked for me. Gerard Butler, who I frequently enjoy watching despite the quality of his movies, gives a great performance. You feel the sense of urgency he has when searching for a safe haven and, alongside Morena Baccarin and Roger Dale Floyd (who also give strong performances), all added to the anxiety-inducing atmosphere as you wonder if they will be able to make it to Greenland before the mother of all meteors hits the planet.

However, similar to every disaster movie, there is an inherent flaw in Greenland. While it’s great to watch the aftermath of disasters and the CGI destruction that comes with it, you almost always know where the story is going to end up. You almost always know the end, how it’s going to play out, and ultimately who’s going to survive, which can take away from the tense atmosphere of these thrillers. And yet, I found Greenland to be slightly different. Of course, it suffers from many of the problems your average disaster movie does but it also, rather surprisingly, gripped me from start to finish.

Like many films, it suffers from a few unneeded, boring scenes, but apart from that, the acting, atmosphere, and the adrenaline-pumping storyline is what really sets this out above the rest. Unlike other movies in this genre, you care about the characters and want to see them survive, and ultimately that’s what compels you to watch as you want to see what will happen to the characters as, at any minute, something could go disastrously wrong. Kudos to Ric Roman Waugh for bringing strong, grounded direction to the proceedings.

It’s always weird to think of the world ending. What would we do, how would we spend our last day? Eating? Sleeping? Better yet, partying? Or would we all be watching movies like nothing is happening? Hopefully, we will never be put in that situation. Yet, Greenland ultimately has a freakish sense of realism that makes it so “scary”, as this could very well be a situation that may happen one day. Greenland certainly isn’t a brilliant film. But in a world where COVID-19 is still impacting our lives, it offers two hours of escapism from our world as we wonder just how much worse it could be. Is this how 2020 will end? Only time will tell.

Thank you for reading! What are your thoughts on Greenland? Comment down below!

Geostorm was the absolute bollocks. Have you tried watching it drunk? Highly recommended.

Watching it drunk was a fun experience