The Blow-Away Emersion that is ‘The 40-Year-Old Version’ 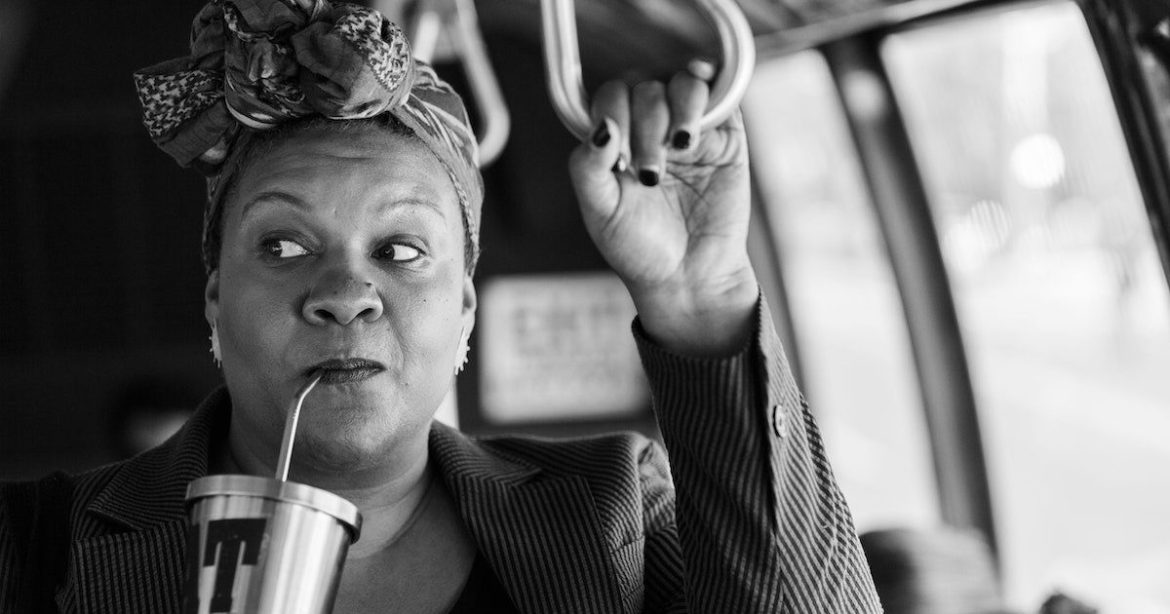 I love it when I’m watching a movie at home, and it grabs me to the point where I start doing all sorts of crazy stuff in the middle of the film. I’ve yelled at the screen, I’ve gotten up and paced around, I’ve even punched pillows out of frustration. But never have I while watching a film, in addition to ALL of those things, ROLLED AROUND on the FREAKING FLOOR.

That is, until now.

The 40-Year-Old Version is a narrative feature film written, directed by, and starring Radha Blank. She plays Radha, a Black woman on the verge of turning 40 who, having long struggled as a playwright in NYC, pursues an alternative creative outlet: rap.

To be honest, it’s a fairly straightforward film, to the point that I don’t really feel the need to talk about the plot for the rest of the review, so here’s some context: Radha’s best friend and agent is Archie. Archie wants to get her her big break, so he sets her up with a big producer Josh Whitman, who takes a play of hers and gradually changes it to fit his own mold. Radha also teaches a high school drama class, where much shenanigans occur. Radha eventually falls in with D, a DJ, who encourages her to pursue her rap-related endeavors; they grow to form a close bond. There are also various neighbors who comment on her life throughout the film.

We might as well start with the obvious thing in this film that people are gonna talk about, especially this year: its perspective on Whiteness. The 40-Year-Old Version explicitly explores the persistent racism within the art community (in this case, Broadway). Specifically, the film calls out how art from Black or other “minority” voices must be of a certain tone or done in a certain style to be deemed “authentic” by White audiences, or as Reed Birney’s character puts it, “the core audience.” Not only that, the art must ultimately center Whiteness (an idea visualized literally in the film).

However, it would be far too simplistic (and also incorrect) to say this film’s sole focus was race. The 40-Year-Old Version is really a film about artistic integrity. Blank postulates that the real issue in art communities is not White people (though they really aren’t helping), it’s people who are willing to sell out to a system that was created to reassure “the core audience” that they’re not part of the problem; throughout this film, the person struggling with doing just that is Radha herself. Also, in case you were now wondering, the film does indeed make jabs at Hamilton, and yes, they are very funny.

Black and White and Shades of Grey

Alright, can we talk about Radha Blank already? Because she, if you ask me, is the triple threat of the year.

Blank as an actor: Blank gives a powerhouse performance as Radha. Actors can often either be too full of themselves or too self-aware when playing a version of themselves. Radha avoids both traps easily by letting herself be silly and awkward while maintaining a constant self-respect. Her facial expressions are priceless, and her raps are, to quote Shakespeare, the dopest of fire.

Blank as a writer: Speaking of those raps, Blank kills it in the writing department. Conversations are nuanced and provocative as often as they get playful and catty, and the bars people spit are that but to the extreme. And, while the structure of the film might feel familiar at times (we’ll get to that), there is never a moment that you are not 100% engrossed by the characters onscreen and what they are saying, whether you want to cheer for them or slap them across the face.

Blank as a director: When it comes to directorial debuts, it’s often difficult to discern what aspects of the film might come to be known as the director’s “style.” Such is the case with Blank’s first effort, but make no mistake: Blank’s got vision for days. The most noticeable choice Blank makes is shooting the film in 35mm black-and-white (shoutout to DP Eric Branco), and to stunning effect. Another standout element of the film is the way she edits in subtextual or contextual color images at key moments (it’s hard to explain, you’ll know what I’m talking about when you watch it). Add on top of that what she brings out of her cast, and you’ve got an incredibly distinct and memorable voice behind the camera.

And Now, An Impromptu Ranking of My Ten Favorite Performances, Because Why Not? I Love This Cast. Give All of them Jobs, Please.

Ripped From the Pages the Right Kind of Way

Now, if I am going to point out a “flaw” in this film, I will have to admit that The 40-Year-Old Version definitely isn’t the most original thing we’ve seen this year; that title probably goes to Charlie Kaufman’s i’m thinking of ending things. However, something I’ve realized over the past couple of years is that originality is not essential to making a great film.

Actually, you know what? Why don’t we, just for fun, compare Blank and Kaufman’s films to illustrate my point?
Warning: the mildest of spoilers for i’m thinking of ending things.

Ripped From the Pages the Right Kind of Way: Chapter 2 – Another Impromptu Tangent (This One Features a Hot Take on Charlie Kaufman)

Both Charlie Kaufman and Radha Blank show clear signs of influence in their 2020 cinematic offerings. With Kaufman, we clearly see how the musical Oklahoma! and the film A Beautiful Mind play key roles in i’m thinking of ending things. And with Blank’s The 40-Year-Old Version, Spike Lee’s 1986 debut She’s Gotta Have It makes its mark, along with the works of Judd Apatow (I mean, duh).

Kaufman takes his influences and incorporates them as explicitly as possible by transplanting musical numbers and speeches directly into his screenplay. Add that to Kaufman’s signature surreal imagery and ever-devolving narrative, and the effect definitely leaves the viewer going “I’ve never seen anything like that before.” But alongside this originality is a sense of obtuseness, or worse, hollowness; unless we know what Kaufman is referencing, i’m thinking of ending things doesn’t make sense. And even if we do know the references, it feels cheap, as Kaufman doesn’t bother doing anything with the influences, he just shows them.

Compare that to Blank, who yes, lifts the color theory from She’s Gotta Have It heavily. The key difference is that Blank pushes Spike Lee’s ideas forward, using them in new ways to express new ideas. And as for the structure of the film’s screenplay, Blank takes Apatow’s dramedy framework, where restless middle-aged protagonists search for meaning, and adds an intersectional urgency; this character isn’t just looking for personal direction, they are openly interrogating the effects of power structures on all people’s lives.

When The 40-Year-Old Version ends, you are aware that you’ve seen this kind of thing before, I’ll give you that. But originality is not the ultimate achievement in cinema, engaging an audience is. Kaufman copied and pasted stuff he liked into his abstract musings so you could call him smart. Blank comments intelligently on her influences without needing to call attention to herself so we can enter more fully into the characters. Less “original”? Maybe. Ultimately more powerful, and much more mature? Without a doubt.

Several of the best cinematic experiences offered this year have been films where the filmmaker tells their own very specific story in as honest a way as possible. Isabel Sandoval did it with Lingua Franca, Merawi Gerima did it with Residue, and Pedro Costa and Vitalina Varela did it together with Vitalina Varela. With The 40-Year-Old Version, Radha Blank not only adds to that list, she turns in the best film of the year (so far).

The 40-Year-Old Version is available to watch right now on Netflix.

Thank you for reading! Have you seen The 40-Year-Old Version? Comment down below!

[…] the conventional scares don’t always quite work, His House is an incredibly assured debut feature from director Remi Weekes. He confidently weaves together scenes showing hostility from neighbors […]

[…] ago, but she wasn’t about to start beef. Instead, Varda just did what she did best: make a great film. And when Cleo from 5 to 7 came out the following year, it became crystal clear that Varda would […]

[…] years ago, André Øvredal made his feature debut with the fast and loose found-footage monster movie Trollhunter. It was just before the […]

‘If Anything Happens I Love You’: The Other...