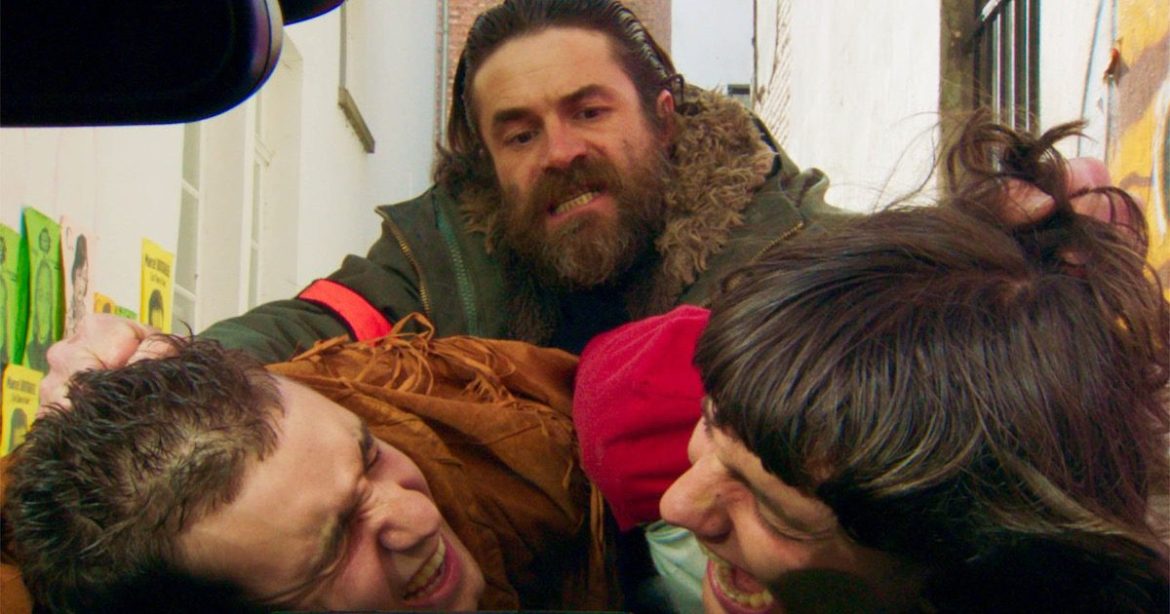 After watching two idiots attempting to pan sear their own shit and feed it to their mother in the opening scene of Mother Schmuckers, I have concluded that Cinema is now dead. I’m bracing for whatever is coming next.

The debut feature from Belgian duo Harpo and Lenny Guit is a trip, and that’s putting it mildly. The opening scene sets you up appropriately for what’s coming your way: if you’re not on board from the start, it might behoove you to back out immediately. At a mere 70 minutes, Mother Schmuckers is overflowing with gross-out gags, including (but not limited to) bestiality and necrophilia.

The Guit brothers are doing everything in their power to make this film as off-putting as possible. Lead characters Issachar Zabulon (Maxi Delmelle and Harpo Guit) are essentially sweaty, dim-witted monsters. From the way other characters interact with them, you get the sense they’ve been terrorizing their corner of Brussels for some time now. But as for this particular set of misadventures, the brothers are desperate for something to eat, running amok in a grocery store trying to steal food. Amid the commotion, they lose their sex-worker mom’s beloved dog January Jack and must now go on a Safdie Brothers-esque escapade to retrieve the dog and regain their mother’s love. If you squint hard enough, you can talk yourself into believing Mother Schmuckers is about the perils of mommy issues.

But it’s not really about that; it’s first and foremost concerned with its own filth. There will be endless comparisons made to John Waters’ Pink Flamingos, but even Waters loves his disgusting characters. Mother Schmuckers is about putting these awful humans in increasingly uncomfortable situations and provoking the audience. It even dips into the surreal occasionally: one scene has a man falls multiple stories and get up unscathed. Frankly, I laughed more times than I care to admit, and it brings me so much joy to see the immediate harsh reaction to this film with a plethora of 1/2 and 1-star reviews piling up on Letterboxd already along with a seemingly universal critical panning. That in itself justifies the goals of this bizarre little film. Congratulations on playing yourselves, ya’ll.

The biggest joke that Mother Schmuckers has to offer is its own existence. This is the kind of galaxy-brain, oddball comedy that I love to stumble upon every so often. Its commitment to being as terrible as possible is something I deeply appreciate. On some perverse level, it’s poetically idiotic.

Every choice is wrong, but they’re so wrong that what starts as incredibly unfunny somehow burrows through to the other side and becomes funny in the end. The chaotic, handheld camerawork with wildly awkward editing only adds to the unappealing stew. (In the Q&A for the film, the Guit brothers replied to each question about why they made certain technical decisions with multiple jokes about how they had no money whatsoever.) The characters within react so earnestly to the over-the-top vulgarity that somehow, if you can believe it, Mother Schmuckers retains an endearing, almost innocent quality. It takes one long look at the very idea of class, laughs maniacally, sniffs some lead paint, and then frolics away to continue enjoying its disgusting way of life.

The commitment to the bit in Mother Schmuckers is unbelievably strong. Even with its short length, the film absolutely overstays its welcome and the comedy wears mightily thin in its second half. But without a doubt, it’s headed for cult fame. Something as deeply stupid as this deserves as much.

Thank you for reading! What are your thoughts on Mother Schmuckers? Comment down below!